Steve Martin is gumshoe Rigby Reardon in Carl Reiner’s hilarious spoof and homage to Film Noir Dead Men Don’t Wear Plaid. Brilliantly matching the production design of classic films, Steve Martin interacts with a cast of colorful characters including Alan Ladd, Ray Milland, Burt Lancaster, Lana Turner among numerous other famous faces of the era. The film’s final act may be a bit of a slip, but the film has a hilarious time sending up the classic detective noir genre. Kino Lober Studio Classics delivers a new Blu-ray of this 80s comedy classic featuring the same solid A/V presentation but with some nice new bonus features. Recommended.

“What does FOC mean?”

If there’s a fault to Dead Men Don’t Wear Plaid it's that by its nature as a sendup of the classic film noir detective story, it’s a one-joke comedy. It’s a long-haul joke that virtually takes the entire 88-minute runtime to tell, but it’s funny as hell if this is your brand of humor. And I don’t mean bawdy or slapstick or pun-fueled madcap romps either. I mean you need to be a dedicated aficionado of the Film Noir genre with more than a passing knowledge of classic films to get the gag.

Now, this take is a double-edged sword of genres. By sending up the Film Noir genre, it’s doing two things - it’s acting as a comedy and as a noir mystery thriller at the same time. So the payoff of the long haul joke and the mystery is where Dead Men Don’t Wear Plaid gets a little clunky. When Carl Reiner’s Nazi Field Marshal VonKluck is exposed, the series of revelations feel like a deflated balloon. While it serves up an amazing homerun dialog exchange between Marin and Reiner trying to out-monologue each other to explain the plot, the gag is a pretty soft payoff. From Edith Head for the costumes to Miklós Rózsa providing a classic noir score to Michael Chapman’s impeccable cinematography - a lot of amazing talent was used to pull this film off. The last gag just fluffs the finale for all that effort. 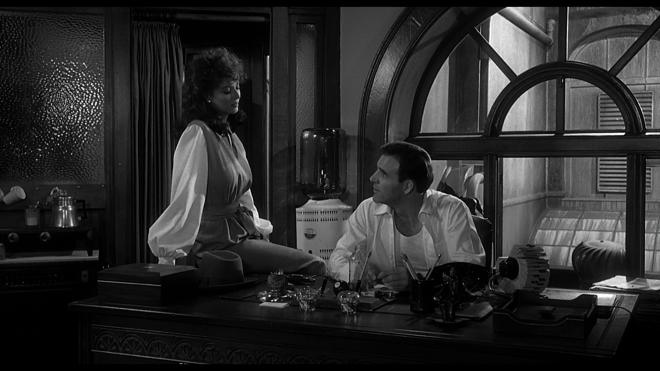 Even with a less-than-amazing finale, Dead Men Don’t Wear Plaid still enjoys three-quarters of an amazing film. Considering the genesis of this film came from an idea from Martin using just one clip of a classic movie to play off of, this film is a technical and artistic accomplishment. As I mentioned earlier, a lot of amazing talents were used to seamlessly integrate new footage with old classic scenes. Some are simple setups with Martin talking to various characters over the phone, but the real accomplishments are the over-the-shoulder recreations. Clearly, Martin isn’t talking to the actor, but the shot-reverse-shot replication is impeccable. I first saw this movie when I was a little kid and didn’t get this joke because, well, I was little. I hadn’t seen any of these movies. As I get older and see more of these classic films I appreciate Dead Men Don’t Wear Plaid a little more for how well they used the footage.

Just shy of becoming a genuine classic comedy, Dead Men Don’t Wear Plaid is an often hilarious tribute to the genre. Like the best spoofs of Mel Brooks, this film works as well as it does because it’s not out to take down the genre. It’s showing a lot of love and appreciation for the material and the array of actors who made those films the genuine classics they are. Not to give you any homework, but here are the films featured throughout Dead Men Don’t Wear Plaid - you don’t need to see them all in order to get the jokes Steve Martin and Carl Reiner pitch, but they help!
Sorry, Wrong Number
White Heat
The Big Sleep
Dark Passage
In A Lonely Place
Double Indemnity
I Walk Alone
The Postman Always Rings Twice
This Gun For Hire
The Lost Weekend
The Bribe
Johnny Eager
The Killers
Deception
Suspicion
Notorious
The Glass Key
Humoresque

Vital Disc Stats: The Blu-ray
Dead Men Don’t Wear Plaid arrives on Blu-ray for the second time, now thanks to Kino Lorber Studio Classics. Pressed on a Region A BD50 disc, the disc is housed in a standard sturdy case with reversible insert artwork and an o-card slipcover. The disc loads to a static image main menu. 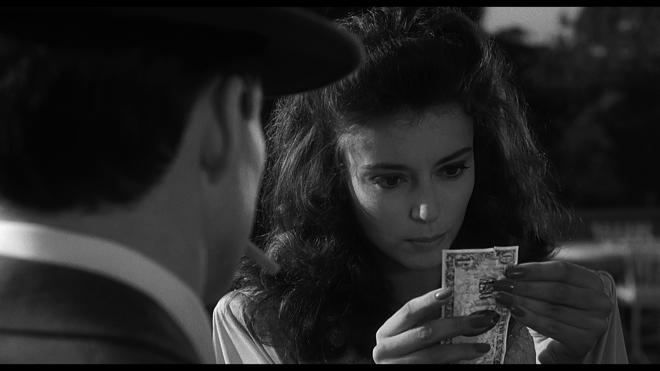 Dead Men Don’t Wear Plaid arrives with what appears to be the same 1.85:1 1080p transfer Universal Studios used back in 2017 for their release. For the life of me, I can not find my copy anywhere to give a direct comparison, but there’s nothing here that leaped out to me as strikingly new and improved. That isn’t a bad thing at all. It may not be the greatest transfer ever, but this is a perfectly good presentation offering some impressive details and a natural grain structure - at least for the modern footage shot in 1982.

Where things get a little dicey is the older archival footage from other movies they edited into the film. Those were all in classic Academy ratio so some have had to be cropped and zoomed to fit the new aspect ratio. Not always, sometimes the 1.85:1 matting is actually complementary to the older films. Most of the time this is pretty good and looks fine. There are a couple of segments where it brings up a host of issues highlighting the condition of the elements used as well as a larger clumpier grain field as well as scratches and speckling. Some effort was made to "age" the look of the modern footage, but these scenes don't always blend. These scenes aren’t usually very long - an edit here and there - but enough so that it’s pretty obvious the differences in quality. It’s not quite seamless, but it gets pretty close. 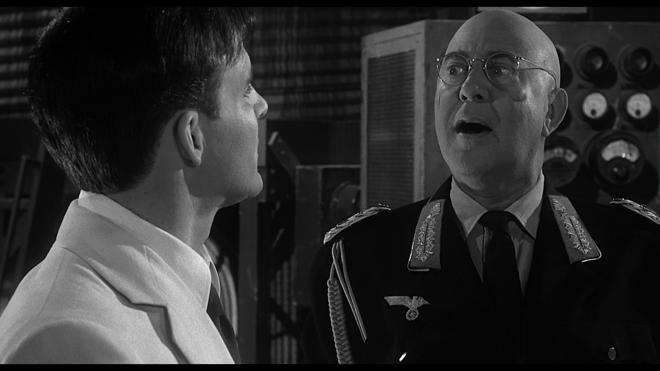 Also included with this release is the same DTS-HD MA 2.0 mix. Which again isn’t a bad thing. A full surround 5.1 mix probably wouldn’t have worked in concert with the clips of classic film footage. Dialog is clean and clear throughout without issue. Sound effects are strong enough giving the film a nice sense of atmosphere and dimension. The only slight “issue” that can’t really be helped is some age-related background hiss for some of the older film clips. It’s not distracting and most of the time not even noticeable, but it’s something to keep an ear out for. Levels are spot on, so once you have the desired listening volume you’re all set. 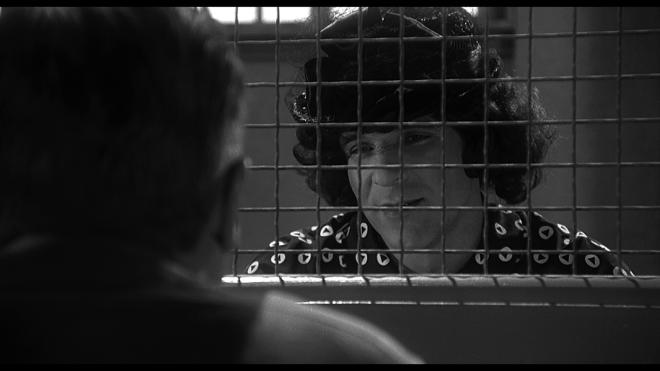 The big difference between releases is this one from Studio Classics actually has bonus features! Not a lot - but it’s still more than nothing at all. The new audio commentary featuring Allan Arkush and Daniel Kremer is a nice listen, they keep things informative and moving but there’s a lot of great trivia throughout the track. The rest of the bonus features amount to the usual collection of promotional materials. 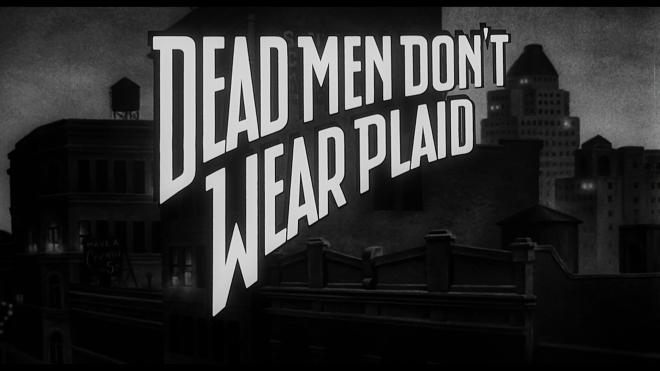 While not quite as successful in the home stretch, Dead Men Don’t Wear Plaid is still a damn funny genre tribute. The Jerk may be the better Carl Reiner/Steve Martin team-up movie, but this one certainly delivers the laughs - especially if you’re in on the gag.

Kino Lorber Studio Classics gives Dead Men Don’t Wear Plaid a second run on Blu-ray offering up the same solid A/V presentation along with some new bonus features. However, if you already have the film on Blu-ray, these features alone may not be worth the double-dip. If you’re a fan and haven’t added this to your collection, this is a solid release to kick back to. Recommended