Well-to-do wallflower Lina McLaidlaw is in love, perhaps in danger. She suspects that Johnnie Aysgarth, the playboy who swept into her life and married her, is a murderer - and that she is his next intended victim.

Alfred Hitchcock's Suspicion shyly combines romance, mystery and atmospheric flourishes (like an eerie, glowing glass of milk, an effect achieved with a light bulb inside in glass). Joan Fontaine plays vulnerable, nerve-wracked Lina, following her acclaimed work in Hitchcock's Rebecca with a striking performance that won the Academy Award and New York Film Critics Award as 1941' Best Actress. Playing against type, Cary Grant makes Johnnie an imposing charmer, wastrel and cad. But also a killer? Like the glass that may or may not contain poison, Johnnie's words and deeds may or may not be laced with menace.

"Now what do you think I was trying to do, kill you?"

Of all the is-he-or-isn't-he-a-diabolical-murderer tales that have captivated audiences over the course of cinema history, 'Suspicion' is arguably the most famous…and controversial. Alfred Hitchcock's elegant and intriguing film keeps us guessing until the final frames, but for most viewers, the outcome is less than satisfying. That's because the original ending of the book upon which this romantic thriller is based was abandoned in favor of a deeply disappointing denouement that's plausible but not palatable. Though audiences didn't seem to care in 1941 ('Suspicion' was RKO's biggest hit of that year), the mystery's resolution has since rankled Hitchcock aficionados - and even Hitchcock himself - casting a cloud over a film that otherwise has many merits.

'Suspicion' begins as an insipid romance, but much like other Hitchcock films ('The Lady Vanishes' chief among them), the opening is misleading, and as underlying conflicts slowly simmer, the story becomes taut and engrossing. Joan Fontaine portrays Lina McLaidlaw, a shy, insecure bookworm who spends most of her time holed up in her family's country estate reading about life instead of participating in it. Fearful she's well on her way to becoming an old maid, she throws herself at Johnnie Aysgarth (Cary Grant), an attractive but perennially broke and irresponsible playboy whom she meets by chance on a train. Johnnie seems smitten, too, and after a brief and rocky courtship - which he keenly manipulates - the two impulsively elope, much to the consternation of Lina's stuffy and very rich parents (Dame May Whitty and Cedric Hardwicke).

Johnnie's motives, however, remain dubious. Has he married Lina solely for the fortune she's sure to inherit, so he can continue to live a pampered life of leisure? It sure looks that way, no matter how many times he professes his undying love for his dear "Monkey-Face" (his pet name for Lina). But can she believe him? A pathological liar, Johnnie continually deceives his bride about his whereabouts, employment, penchant for gambling, and outrageous debts without ever batting an eye, and his voracious interest in murder mysteries elicits further concern. It's no wonder an insidious suspicion soon infects Lina and begins gnawing at her psyche. Worst of all, she worries Johnnie's mounting desperation over a past indiscretion might drive him to do something drastic…like kill her.

In the novel ('Before the Fact' by Francis Iles), Johnnie's modus operandi is all too clear. He's cold and calculating, a serial adulterer, and treats Lina shabbily, robbing her of money, dignity, and finally sanity. And yet in spite of all that, she loves him unendurably. Lina knows Johnnie will one day murder her and almost welcomes it, but prior to the act, she secretly writes a letter to her mother detailing her fears and predicting her demise…and leaves it for an unsuspecting Johnnie to mail. After he serves her a glass of milk laced with a lethal poison that she willingly drinks, a now carefree Johnnie innocently drops the incriminating letter in the post box, ironically sealing his own miserable fate.

Sadly, 'Suspicion' doesn't follow that clever outline. (If it had, it would have shocked audiences of its day and delighted future generations.) Legend has it the picture's ending (which I won't divulge here) was changed at the last minute to placate a studio that worried filmgoers wouldn't accept debonair heartthrob Cary Grant as a despicable, menacing killer, but in actuality the alterations to 'Suspicion' were carefully constructed before shooting commenced...and Hitchcock fully embraced them. Yet whether he secretly hoped to revert to the original ending as production crept along is still open for debate, especially in light of Grant's duplicitous portrayal, which tries its best to lead us in one direction before making an incongruous U turn in the movie's final moments.

Make no mistake, the ending as it stands is not a cheat. All the plot's pieces snugly interlock and fit Hitchcock's initial plan of presenting the tale from the perspective of a delusional, impressionable, naive, and paranoid woman. (To hammer home the point, he often shows Lina peering through spectacles to give the impression she's looking at the story's events through a filtered lens.) But in the years following the film's release, the Master of Suspense disavowed that angle and tried to rewrite history by painting himself as a victim of studio politics who was forced to compromise his creative vision. He even denounced 'Suspicion' as a flawed film.

Such a critical assessment, however, is far from accurate. For most of its 99 minutes, 'Suspicion' is an excellent study of fear, mistrust, and insecurity that Hitchcock directs with confidence and flair. The long shot of Johnnie slowly mounting the stairs with a sinister glass of milk on a tray has become a classic Hitchcock moment, and though reportedly Fontaine and Grant didn't get along very well, their potent on-screen chemistry heightens the tension that steadily builds throughout the film. Many assume Fontaine's Best Actress Oscar for 'Suspicion' was merely a consolation prize for not winning for Hitchcock's 'Rebecca' the year before (the characters in both films are strikingly similar), and while such a theory may be partially correct, her understated and nuanced performance stands on its own. Fontaine may be a bit too breathy and mousy early on, but grows nicely into the role, adopting a quiet strength and steadfast conviction that sustains 'Suspicion' right up through its misguided finale.

Grant - in his first of four collaborations with Hitchcock ('Notorious,' 'To Catch a Thief,' and 'North by Northwest' were yet to come) - is good, too, but his portrayal fluctuates wildly from scene to scene. He's charming and boyish one minute, dour and nasty the next, with not much middle ground linking the two extremes. The result is a split-personality performance that consistently straddles the fence and ultimately harms the film. Several stellar supporting players add plenty of English atmosphere to the proceedings, but none more than Nigel Bruce as Johnnie's often befuddled buddy Beaky. Best known for portraying Dr. Watson opposite Basil Rathbone's Sherlock Holmes in several films between 1939 and 1946, Bruce provides welcome comic relief and almost steals the movie.

'Suspicion' may not rank as one of Hitchcock's best films, but it cemented the director's reputation in America, and as a result, the Hitchcock name would forever reside above the titles of all his subsequent movies. Though many viewers may not like how this psychological thriller wraps up, the build-up is slick, entertaining, and well crafted, and I suspect most viewers will enjoy the ride. All the classic Hitchcock elements - mystery, romance, humor, danger, and duplicity - are here, and they're executed with customary aplomb by one of Hollywood's finest artists. A slam-bang finish would have been nice, but unfortunately in this case, we can't have everything. 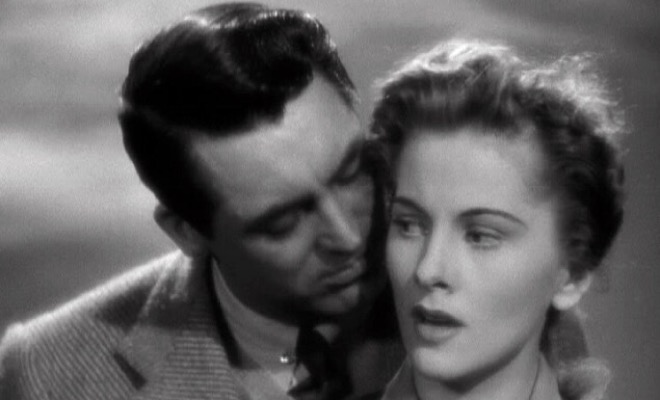 'Suspicion' arrives on Blu-ray packaged in a standard case. Video codec is 1080p/AVC MPEG-4 and audio is DTS-HD Master Audio 2.0 mono. Once the disc is inserted into the player, the static menu with music immediately pops up; no previews or promos precede it.

Warner Archive continues its string of classic movie high-def transfer winners with this superior 1080p/AVC MPEG-4 effort. 'Suspicion' has never looked particularly good in its previous home video incarnations, but you'd never know it from this silky smooth yet beautifully film-like presentation. Grain is evident but never distracting, and excellent contrast and clarity lend the image a vibrant, fresh look. Black levels are rich and deep, good shadow delineation keeps crush at bay, and a nicely varied gray scale enhances depth and detail. Unfortunately, 'Suspicion' was entirely studio shot (even the "exteriors" were filmed on a soundstage), so the heightened sharpness calls undue attention to painted backdrops and fake tundra, but aside from a few stray marks dotting the source material, that's the only negative aspect of an exceptionally positive viewing experience.

The DTS-HD Master Audio 2.0 mono track is also quite strong, thanks to full-bodied fidelity that provides a marvelous sense of presence and depth. Franz Waxman's lushly romantic (and often melodramatic) score sounds especially good, filling the room with lush, well-modulated tones, and a wide dynamic scale allows it to fully breathe. Dialogue is always clear and easy to comprehend, and no age-related hiccups, such as hiss, pops, or crackles, intrude. 'Suspicion' may be 75 years old, but it sounds like a spring chicken here.

Just a couple of supplements are included.

'Suspicion' may have won Joan Fontaine a Best Actress Oscar, but the story of a paranoid wife who worries her ne'er-do-well husband wants to murder her for her money can't decide whether its central male character is a hero or villain, and the result is an uneven, often frustrating tale of romantic suspense. Though it doesn't quite make the Hitchcock short list, 'Suspicion' still manages to build significant tension and its impeccable style and solid performances almost overshadow the disappointing denouement. Warner Archive's Blu-ray presentation features a gorgeous video transfer, excellent audio, and an absorbing making-of featurette, all of which make this disc worthy of a recommendation, despite the film's inherent flaws.

Sale Price 17.99
Buy Now
3rd Party 14.95
In Stock.
See what people are saying about this story or others
See Comments in Forum
Previous Next
Pre-Orders
Tomorrow's latest releases