No Time for Love

Claudette Colbert teams up with Fred MacMurray for a fourth time, and this time she has No Time for Love ...until her hunky co-star worms his way into her dreams. This breezy rom-com about a buttoned-up career woman's rocky relationship with a blue-collar construction worker sparkles periodically, but never quite catches fire, despite the contributions of a fine cast and slick direction from Mitchell Leisen. Though Kino's transfer could benefit from some remastering, the video looks surprisingly good and bolsters this Blu-ray presentation of a fun but forgettable film. Worth a Look.

The first two pictures Claudette Colbert and Fred MacMurray made together in the mid-1930s - The Gilded Lily and The Bride Comes Home - examine young love from a screwball perspective, but by 1943 Colbert was pushing 40 and beyond such silliness. Or was she? A more mature romantic comedy with a worldly, independent woman at its center better suited the seasoned star, and No Time for Love, about an esteemed, confident female photojournalist who falls for a burly, unrefined construction worker, seemed like the ideal property to reunite Colbert and MacMurray, who hadn't shared the screen since the period drama Maid of Salem six years earlier.

A slick blend of slapstick, smart banter, and sexual sparring, No Time for Love delivers in fits and starts. The material fits its two stars like a glove and the elegant direction of Mitchell Leisen, who specialized in this type of light romantic fluff (as did his mentor Ernst Lubitsch), lends it an air of sophistication, but despite such attributes, the film lacks that little something extra to make it memorable. As rom-coms go, it's diverting, somewhat saucy, and occasionally clever, but anyone who makes time for No Time for Love, will crave something more. 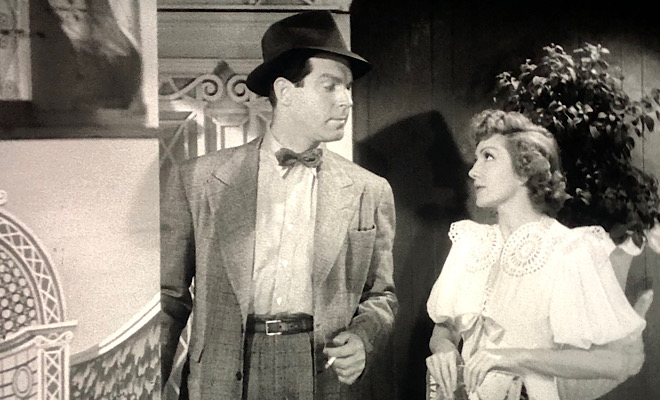 Loosely based on trailblazing Life magazine photographer Margaret Bourke-White, who specialized in shooting such unglamorous subjects as steel factories, dam construction, and foreign wars, No Time for Love follows her professional doppelgänger Katherine Grant (Colbert) as she documents the building of a tunnel under New York City's East River for Mirror magazine. The bare-chested construction workers, called sandhogs, resent her presence because, they say, women on site are bad luck. And they're right. Katherine proves to be a distraction, innocently causing an accident that almost kills hunky Jim Ryan (MacMurray), nicknamed Superman by his brethren.

Katherine feels terrible about the mishap, but after Ryan accuses her of hitting on him, she goes ballistic. "You conceited ape!" she snaps. "You're living proof that men can exist without mentality!" The sniping continues the next day when Ryan returns some camera equipment Katherine left in the tunnel. The heated confrontation ends with a rough kiss that takes Katherine by surprise and takes her breath away. Much to her horror, Ryan then works his way into her dreams, both at night and during the day.

To get him out of her system, Katherine hires Ryan as her assistant after a brawl with his buddies gets him suspended from his job. Katherine believes if she spends more time with Ryan his brutish personality and lack of intellect will begin to revolt her. Of course, the opposite turns out to be true, but both Katherine and Ryan are so obstinate and proud, the prospect of a future together looks bleak, especially when complications sabotage their relationship at every turn. 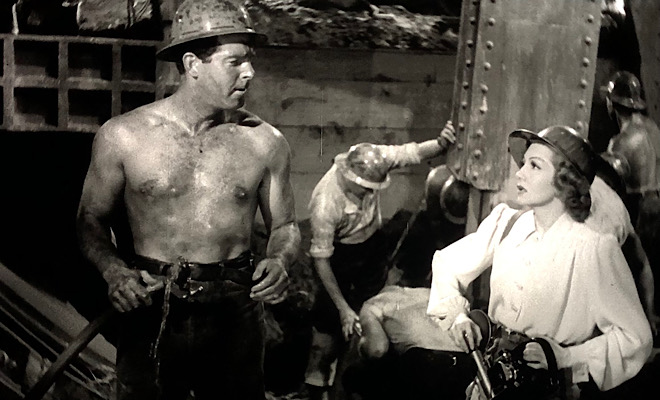 High ideals versus base desires and high society versus the uncultured working class are some of the mental and physical conflicts coursing through No Time for Love. The script by Claude Binyon, who wrote two previous Colbert-MacMurray pictures (The Gilded Lily and The Bride Comes Home), also chronicles the humanization and feminization of a career woman who relishes her success in a man's world and demands to be treated like an equal. Cutting women down to size and putting them in their "proper place" was a common theme in 1940s films, and though No Time for Love doesn't offend as much as other pictures of the period, the final image of MacMurray carrying away a delighted Colbert over his shoulder certainly signals the triumph of the caveman over his smart and civilized sexual foe.

Psychology was also a hot topic in '40s films, and though the far-out dream sequence that finds Ryan in a faux Superman suit swooping in to rescue a scantily clad Katherine from her dastardly fiancé might initially seem like a silly comic interlude, it quickly becomes a pivotal plot point. Katherine's remedy for her subconscious obsession with Ryan also seems simplistic, but it was probably all audiences of the day could handle. (Leisen would more fully explore psychology, psychoanalysis, and the mental turmoil of professional women the following year in the musical Lady in the Dark starring Ginger Rogers, but its colossal failure proved viewers still weren't ready to embrace such an esoteric subject.)

The film's substance, however, always takes a back seat to its comedy. The scene in which Katherine attempts to tame the sandhogs' violent impulses by teaching them the genteel game of musical chairs - with disastrous results - is especially funny, and there are plenty of snappy exchanges between Colbert and MacMurray. Much like William Powell and Myrna Loy and Spencer Tracy and Katharine Hepburn, the duo sustains their chemistry, always picking up right where they left off, no matter how many years have transpired. Their films may not be iconic, but their partnership is. 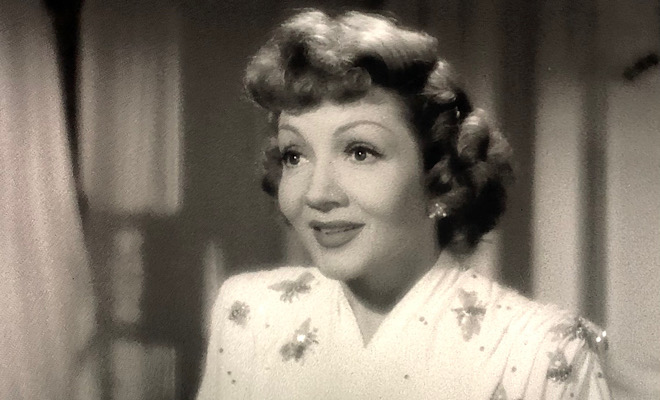 The top-notch supporting cast also excels. Ilka Chase, perhaps best known for portraying Bette Davis' savvy, sympathetic sister-in-law in Now, Voyager, serves up most of the wisecracks as Katherine's cheeky sister, but a young Richard Haydn (who 22 years later would memorably play Von Trapp family friend Max Detweiler in The Sound of Music) as one of Katherine's effete pals and sassy June Havoc (the real-life sister of Gypsy Rose Lee) as a ditzy showgirl who vies for Ryan's affection rattle off a fair share of zingers, too. Golden Age film fans also will recognize the always wonderful Lillian Randolph as Katherine's maid. Randolph memorably played the Bailey family cook in It's a Wonderful Life and perked up countless other movies over the course of her lengthy career.

Classy production values, elegant costumes by Edith Head and Irene, and the elaborate, realistic tunnel sets, which undoubtedly earned the film an Oscar nomination for Best Art Direction-Interior Decoration, also enhance No Time for Love, but despite its considerable attributes, the movie fails to make a lasting impression. It's a cute, occasionally incisive rom-com, but the magic Leisen created with Colbert in the hilarious 1939 screwball comedy Midnight and with MacMurray in the charming 1940 Christmas classic Remember the Night is absent here. (The fact that Billy Wilder and Charles Brackett wrote Midnight and Preston Sturges penned Remember the Night might have more to do with No Time for Love's ho-hum feel than Leisen.) Though No Time for Love hits several strong notes, the resulting tune is more of a catchy jingle than a glorious symphony. 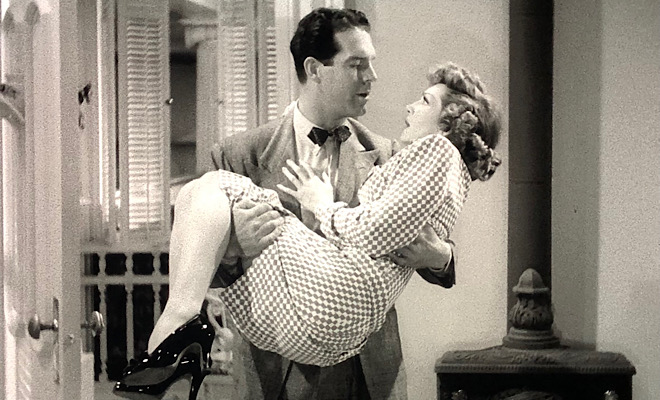 Vital Disc Stats: The Blu-ray
No Time for Love arrives on Blu-ray packaged in a standard case. Video codec is 1080p/AVC MPEG-4 and audio is DTS-HD Master Audio 2.0 mono. Once the disc is inserted into the player, the static menu with music immediately pops up; no previews or promos precede it.

Much like the other Colbert-MacMurray films recently released by Kino, No Time for Love hasn't received any remastering before its Blu-ray release. The good news is the source print for this 1080p/AVC MPEG-4 transfer is in much better shape than its predecessors. (The fact that No Time for Love was produced in the 1940s instead of the '30s might explain its more spritely condition.) Strong clarity, nicely pitched contrast, and enough grain to preserve the feel of celluloid distinguish the image, while excellent shadow delineation helps enliven the darker tunnel scenes. Rich blacks, bright whites, and beautifully balanced grays (the mud and sludge that flood the tunnel toward the end of the movie look especially gross and gloppy) produce a well-balanced picture, and sharp close-ups that highlight Colbert's creamy complexion and MacMurray's grimy face during the construction scenes grab attention.

The special effects and processed shots employed during the dream sequence look a bit ragged, but that's to be expected considering the rather primitive techniques employed. Some scenes look a bit softer than others and some speckling occurs throughout, but these are negligible issues that don't detract from the overall quality of this respectable, but far from spectacular, rendering.

The DTS-HD Master Audio 2.0 mono track maximizes the industrial sound elements like machinery engines, mine cars on rails, and the crashing of equipment. A wide dynamic scale handles the highs and lows of Victor Young's sweeping music score without any distortion, all the dialogue is clear and easy to comprehend, and sonic accents like fisticuffs, screams, and collapsing furniture are crisp. Some mild surface noise can be heard during quieter stretches, but only if you listen carefully. Like the video, this audio track could use some remastering, but it gets the job done well enough as is.

The fourth pairing of Colbert and MacMurray may not be their best, but No Time for Love boasts enough hilarity and romantic bickering to keep fans of the duo happily engaged for 84 minutes. Director Mitchell Leisen's innocuous rom-com about a highfalutin female magazine photographer and the slab of blue-collar beefcake who stokes both her ire and libido hasn't gotten the remastering it deserves, but Kino's Blu-ray presentation features a very watchable transfer, solid audio, and an engaging commentary track. If you like Claudette and Fred, you should make time for No Time for Love. Worth a Look.