Who can ever forget Paul Henreid lighting two cigarettes at once, then giving one to Bette Davis, all while Max Steiner's legendary love theme plays in the background? In a nutshell, that's Now, Voyager, but there's a lot more to director Irving Rapper's adaptation of Olive Higgins Prouty's novel than gooey romance. This timeless study of one woman's struggle to combat mental illness, escape her manipulative mother's domination, and achieve both independence and a sense of self-worth remains one of the great women's pictures of the 1940s, and Criterion's splashy Blu-ray presentation superbly honors it. Top-notch video and audio transfers, a fine array of supplements, and a hefty booklet make this long overdue high-def edition of an all-time classic a must own release.

"Oh Jerry, don't let's ask for the moon, we have the stars."

Before feminist films were really a thing, we had what they used to call "women's pictures," highly emotional, somewhat syrupy, often melodramatic movies produced during Hollywood's Golden Age that explore the social, domestic, and romantic problems plaguing a host of females from various backgrounds. The best of these films depict strong, resourceful heroines who blaze an independent trail and refuse to be beaten down by life's hard knocks. (Of course, Hollywood's stringent production code wouldn't allow these free spirits to satisfy all their appetites, and if they did, they would usually pay a hefty personal price.) On the other side of the spectrum, the genre also showcases noble, selfless women who sacrifice everything for their men and children, and often endure unbelievable hardship and strife in the name of love. Copious amounts of Kleenex are often required to get through these sentimental, almost masochistic weepies that almost always end with a huge emotional catharsis.

Now, Voyager bridges the gap between the two styles, and maybe that's why it remains one of the most satisfying women's pictures of the 1940s. Based on the bestselling novel by Olive Higgins Prouty (who also wrote arguably the weepiest weepie of all time, Stella Dallas) and featuring a bit of business that's become one of the most iconic moments in all of cinema history, this intelligent, affecting romantic drama chronicles a devoted daughter's struggle to overcome her domineering mother and debilitating mental illness to become a self-assured, independent woman. It's also one of the first movies to champion the benefits of psychoanalysis and portray a complicated love affair in a more cerebral and spiritual manner. 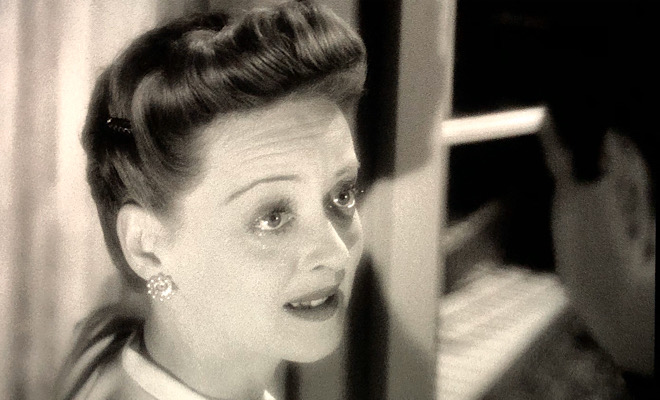 Charlotte Vale (Bette Davis) is a woman on the verge of a nervous breakdown. Repressed, browbeaten, and manipulated by her stiff, cold, judgmental mother (Gladys Cooper) almost since the day she was born, the dowdy, fragile Charlotte is a virtual prisoner in her stately Beacon Hill mansion in Boston. Crippling insecurity, a paralyzing fear of social situations, and tremendous internal stress have taken a toll on Charlotte, and though she's still a relatively young woman, she looks, dresses, and acts like a middle-aged spinster on steroids.

Her caring sister-in-law Lisa (Ilka Chase) introduces Charlotte to Dr. Jaquith (Claude Rains), a psychiatrist who instantly classifies her as "seriously ill." Charlotte spends a few months in his bucolic sanatorium, then - after a much-needed makeover - tries to spread her wings on a South American pleasure cruise. No longer an ugly duckling, the beautiful swan draws the attention of Jerry Dorrance (Paul Henreid), a married businessman who's chained to a clingy, often shrewish wife who resents and mistreats their withdrawn adolescent daughter. Though still mentally fragile and emotionally vulnerable, Charlotte succumbs to Jerry's charms, and their affair helps restore her self-esteem and instill the courage she needs to stand up to her mother and become an independent woman once she returns to the stuffy, snooty confines of Beacon Hill.

Casey Robinson's literate, character-driven script, Irving Rapper's elegant direction, and several excellent performances distinguish Now, Voyager (the title comes from a line in a Walt Whitman poem, "Now, voyager, sail thou forth to seek and find"), but two other elements cemented the movie's reputation. The instantly identifiable love theme from Max Steiner's Oscar-winning score and a downright iconic cigarette-lighting motif loft the movie into a rarefied cinematic realm. The former remains one of the most recognizable bits of music from Hollywood's Golden Age, while the latter became a fad and forever defines the film. When Henreid takes two cigarettes, lights them simultaneously, then gives one to Davis, the seemingly mundane act quickly became the pinnacle of romance to World War II-era audiences and a surprisingly sensual come-on that injects some overt sexual overtones into a largely chaste movie.

While actresses today jump at the chance to physically transform themselves for the sake of a role (and hopefully an Oscar), few Golden Age stars deigned to de-glam and go dowdy to accurately portray a character. Davis was a notable exception. Much like her male counterpart, Paul Muni, Davis had no qualms about appearing unattractive on camera, and was often eager to do so. She portrayed a woman ravaged by syphillis in Of Human Bondage and shaved a portion of her head to play Elizabeth I in The Private Lives of Elizabeth and Essex, so it was hardly a stretch for her to don bushy eyebrows, spinsterish spectacles, a scraggly hairdo, and a bit of padding to appropriately channel the unbalanced Charlotte in the early scenes of Now, Voyager. The result is highly effective, and makes the character's smashing makeover all the more stunning. 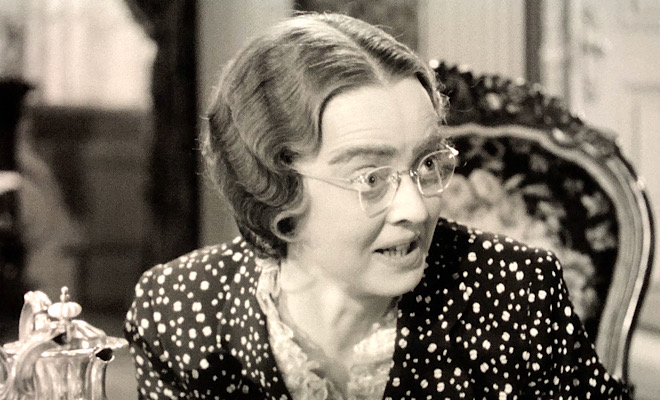 Davis received her fifth consecutive Best Actress Oscar nomination for her multi-faceted work. Finely nuanced and devoid of many of the star's distracting mannerisms, Davis' performance ranks among the best and most revered turns of her storied career. Henreid projects just the right mix of suave European charm and sensitivity, and he and Davis create potent chemistry. As the wise, patient, stoic Dr. Jaquith, Rains is excellent, too, although the role hardly taps his considerable well of talent. (Both men would start shooting Casablanca only a couple of days after they completed their work on Now, Voyager.) This trio of titans clicked so well, they would reunite four years later - along with director Rapper - for the far more melodramatic, less successful, but very entertaining Deception.

Cooper earned a Best Supporting Actress nod and almost steals the picture as the manipulative, cranky matriarch. Her scenes with Davis crackle with delicious tension, yet she also injects welcome humor into her role. Chase is lovely as the sympathetic Lisa, Bonita Granville shines as Charlotte's sarcastic niece, and a young Mary Wickes makes a huge impression as Mrs. Vale's spunky, wise-cracking nurse.

Now, Voyager seamlessly mixes star-crossed romance with one woman's struggle to overcome mental illness and evolve into a strong, independent woman able to live life on her own terms. It's an engrossing, emotional, well-acted, beautifully scripted and directed tale that still tugs the heart strings and gives hope to those dealing with psychological issues. It also stands as one of Davis' best films and one of the finest women's pictures of the 1940s. 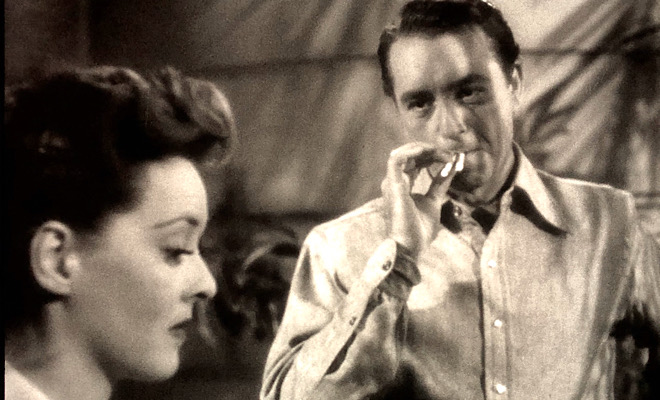 Now, Voyager at last arrives on Blu-ray packaged in a standard Criterion case. A beautiful 36-page booklet featuring an essay by film scholar Patricia White, a fascinating 1937 article on film acting by Bette Davis herself, several scene stills and behind-the-scenes production shots, a cast and crew listing, and transfer notes is tucked inside the front cover. Video codec is 1080p/AVC MPEG-4 and audio is LPCM mono. Once the disc is inserted into the player, the static menu with music immediately pops up; no previews or promos precede it.

The 2001 DVD transfer of Now, Voyager was one of the first great classic movie renderings of the digital age. Why it's taken so long for this superior romantic drama to transition to Blu-ray remains a mystery, but Criterion's gorgeous 1080p/AVC MPEG-4 transfer struck from a brand-new 4K restoration of the film has made the interminable wait worthwhile. According to the liner notes, "This new digital transfer was created in 4K resolution...primarily from the 35 mm nitrate original camera negative. Some sequences were scanned from a 35 mm nitrate fine-grain master held by the Museum of Modern Art." The result is a spectacular rendering that will surely please Davis' legion of fans and anyone who appreciates the product of Hollywood's Golden Age.

Grain is evident, but it supplies necessary texture and lends the image a wonderful film-like feel, while excellent contrast and clarity bring out all the nuances of Sol Polito's lush cinematography. Deep black levels, bright, stable whites, and perfectly graded grays combine to create a well-balanced picture that's full of detail. All the intricate wallpaper patterns and bits of bric-a-brac in the Vale home are wonderfully sharp, as are costume textures and all the glamorous close-ups, which showcase fine facial features well. Shadow delineation is also good, and aside from a couple of stray hairs that briefly appear in the bottom of the frame, no nicks, marks, or scratches mar the pristine source material.

The liner notes state "the original monaural soundtrack was remastered from the 35 mm nitrate fine-grain," and the resulting LPCM transfer is crystal clear and free of any age-related hiss, pops, or crackle. The track's biggest responsibility is to properly showcase Max Steiner's famous, Oscar-winning score, and it does so beautifully, allowing the strings and winds to fill the room with ease. A wide dynamic scale handles all the track's highs and lows while keeping distortion at bay, and all the dialogue is easy to comprehend. Aside from its glorious music, the Now, Voyager track is rather quiet, but this excellent transfer nicely integrates all the subtleties to produce a well-balanced whole.

With its iconic Max Steiner score, classic cigarette-lighting motif, engrossing narrative, and Bette Davis at the peak of her career, Now, Voyager stands as one of the all-time great romantic dramas. The story of a repressed, mother-dominated spinster who overcomes her crippling insecurities only to fall in love with a man she can't have offers Davis one of her meatiest and most identifiable roles. Criterion's Blu-ray presentation appropriately honors this classy woman's picture with superior video and audio transfers and several high-quality supplements. It took far too long, but at last Now, Voyager gets its high-def upgrade, and Criterion gives us both the moon and the stars with this exceptional release. Must Own.

Sale Price 27.99
List Price 39.95
Buy Now
3rd Party 15.62
In Stock.
See what people are saying about this story or others
See Comments in Forum
Previous Next
Pre-Orders
Tomorrow's latest releases