Kirk Douglas and Anthony Quinn light up John Sturges’ tense Western thriller Last Train from Gun Hill. With excellent performances, tight direction, and a swift pace this classic keeps you on the edge of your seat. Last Train from Gun Hill finally arrives on Blu-ray for the first time as the 18th entry in the Paramount Presents line. Newly restored, the transfer is often striking and beautiful - but frustrating due to compression issues causing odd and unsightly motion blur. The audio is dynamic and immersive. All the same, the film is one of the best and worth the addition to any Western fan’s collection. Recommended

Marshal Matt Morgan (Kirk Douglas) has discovered his wife raped and murdered. His small son saw the attackers, stealing one of their horses to get help. With only an ornate saddle to go on, Morgan travels to Gun Hill to see his old friend and cattle baron Craig Beldon (Anthony Quinn). The reunion starts out cordial, but when the primary suspect in the crime turns out to be Beldon’s son, Morgan finds himself on the right side of the law but on the wrong side of an entire town beholden to the richest man in the territory. 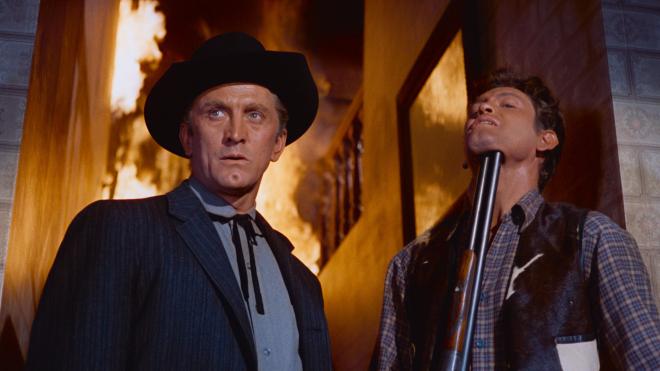 With the right material, John Sturges was a formidable filmmaker capable of churning out genuine classics like The Magnificent Seven, The Great Escape, and Bad Day At Black Rock. If he could keep his personal issues at bay and lead with a great script, nothing could stop him. Such is the case with the thriller Last Train from Gun Hill. A lean tight revenge thriller, it sets the stakes early and blazes through to the final frame.

Breaking the film down into other recognizable film plots, this film is the perfect stew of Delmer Daves’ 3:10 to Yuma and Fred Zinnemann’s High Noon. We have a man on the right side of the law trying to get back to his town with a murder suspect but is pinned down by an armed gang and no honest person willing to help. Based on the short story Showdown by Les Crutchfield, this film could almost be considered a bit of a ripoff of those other great westerns but Last Train from Gun Hill moves with the material in its own way and capably stands on its own legs.

Sturges was in top-tier shape with this film. At a breezy 94-minutes, James Poe’s script moves without slowing down but never shortchanges character or plot. Sturges could get bogged down at various times in his career and some films could meander far too long or go so slim as to cheat the character arcs. Joe Kidd and Marooned are examples of his worst tendencies as a filmmaker. For this film, everything feels complete without anything left hanging.

When we meet Matt Morgan we see a kind and capable lawman. When tragedy strikes he’s forced back to the darkest version of himself before he met his wife in order to avenge her murder. When we meet Craig Beldon he’s a tower of success in business but as a father, he’s a failure. When his son turns up without a prized saddle and an open cut on his face - he knows something is wrong. He doesn’t know what, but when Morgan shows up on his doorstep he knows it was something terrible. He then has to choose between defending his only son or betraying his best friend and the law.

Last Train from Gun Hill would be nothing without the great cast. Anthony Quinn is in terrific form as Beldon. I’ve always loved how he communicates without really moving or speaking. He lets his eyes or a smirk do all of the necessary acting to convey a wide range of emotions. In a welcome addition, Carolyn Jones gets to break the traditional “beautiful woman” role so common in westerns. She’s Beldon’s former lover conflicted with her feelings but not shoehorned into being the romantic lead. She’s the film’s moral compass and she gets several moments to outshine her costars. Kirk Douglas may be the lead of the film but I saved him for last because he’s so damn good in this movie. Douglas always delivered excellent performances and I put this one as a Top Five entry. His transition from friendly local lawman to wounded man out for revenge is chilling. For me, this next scene is one of the best deliveries of his long career:

I love Westerns. Pretty much since birth I was raised with the genre as a key piece of my cinematic diet. It doesn’t matter if it was a major release or B-picture studio filler, I’ll carve out the time to watch any new western. I first caught Last Train from Gun Hill a few years ago on TCM and have only seen it two or three times since, but it never fails to suck me in. I resisted buying the DVD in hope that a Blu-ray would be on the way. Now that it’s here I’m glad to finally have it in my collection even if not in a 100% ideal condition (more on that in a bit). This one may not be the first film anyone thinks of for John Sturges or Kirk Douglas or Anthony Quinn - but it should be. It’s a terrific piece of filmmaking from frame one to the bitter thrilling end.

Vital Disc Stats: The Blu-ray
The Last Train from Gun Hill finally pulls into the Blu-ray station as the 18th entry in the Paramount Presents line in a single-disc Blu-ray + Digital set. Pressed on a BD-50 disc, the disc is housed in a sturdy clear keepcase with a slipcover that opens to reveal the film’s original theatrical poster art. The disc loads to a static image main menu with traditional navigation options. 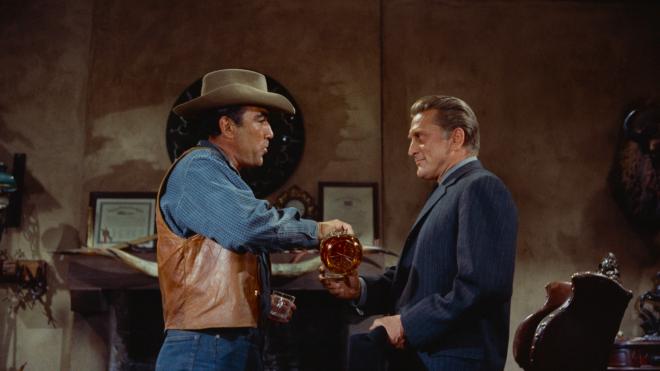 Reportedly sourced from a 6K transfer of the original VistaVision negatives, this 1.85:1 1080p transfer is often a genuine vision of restoration perfection but held back due to a frustrating amount of compression that leads to unsightly unnatural-looking motion blur.

At first, this transfer is truly picture-perfect 5-Star A+ demo-worthy material. Details in facial features, the impressive costuming, and the incredible production design are evident in every frame. You often want to pause the film and just look at everything on the screen. Colors are bold and beautiful with spot-on primary saturation. The image may favor earthy yellow/brown tones but there’s plenty of red and blue pop. Skin tones are healthy and lifelike. Black levels are inky with strong shadow separation for dark scenes giving the image a constant feeling of three-dimensional depth. Contrast is on point without any blooming and a natural layer of grain creates a richly film-like presentation… up to a point.

Now, motion blur is to be expected during camera pans as someone rides across the plain and dramatic action sequences. From the lowest 8mm formats to 8K 120fps digital photography, it’s just a normal side effect of filming movement. And for the first third of the film, this appears natural without issue. But something kicks around the 24-minute mark when Beldon and Morgan meet up the motion blur becomes unnatural looking. Simple gestures like raising a hand, pouring a drink, turning around, or pulling spent cartridges from a revolver - all look like the respective actor just entered the Speed Force for a few frames. It’s this blurry herkey-jerky effect that became increasingly distracting and forces me to kick this otherwise perfect transfer down.

To make sure I wasn’t nuts, I tried this on three different setups and it was always present. Looking at the disc architecture, the film itself only runs 26.5 gigs of a BD-50 disc. As a whole, there are roughly 15 gigs and change of unused disc space that could have been used to give this transfer some more breathing room. I might be over-nitpicking this but it bugged me every time it cropped up - especially because the rest of the image is so damn beautiful. Taken as a whole, this is still miles and away better than the old DVD, but it comes with its own set of issues. Some may not be bothered by it, but I thought it was bad enough to knock a point and a half off an otherwise perfect score. 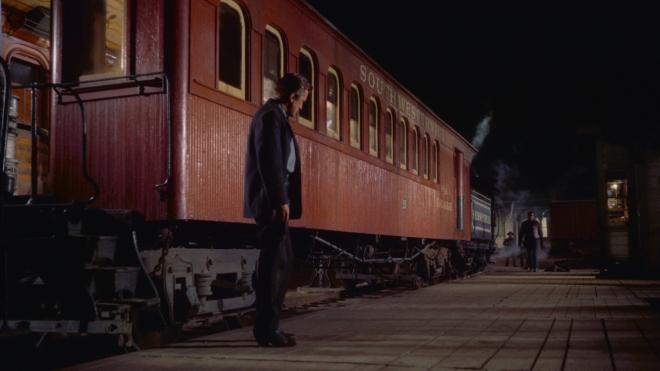 On the brighter side of this A/V presentation, the Dolby TrueHD 2.0 mono mix is a delight. Clean, clear, and active this is a beautiful mix. Dialog crackles with a lifelike presence from each actor. Sound effects and staging maintain a lively active presence with atmosphere to spare. The Dimitri Tiomkin score is beautiful material adding mood to the dramatic pieces with pop and flair for the action sequences. Without any age-related anomalies, this is a glorious sound mix that captures your attention and maintains the tense urgency of the story. 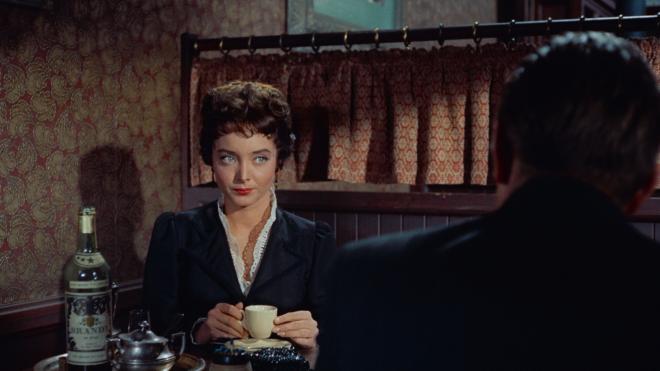 As has been the case now with so many of these Paramount Presents releases, bonus features are a bit of an afterthought. I mean, I love Leonard Maltin and could listen to him talk about movies for hours, but a 7-minute and change featurette isn’t that impressive. Now there’s a few more megabytes that could have been saved for the transfer… 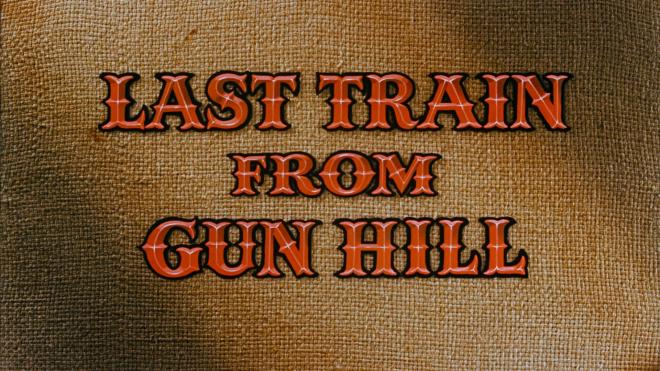 I have a lot of favorite Westerns and it’s a list that keeps getting longer as more classics make it to Blu-ray. Last Train from Gun Hill is in my personal top ten. I dare say I like it even better than Sturges’ own The Magnificent Seven. Kirk Douglas delivers one of his most intense performances with Anthony Quinn rolling in an equally impassioned turn. Add the smart script from James Poe with Sturges’ tight and steady direction and you have one hell of a film. If you’ve never seen it, add it to the pile of films you need to get caught up with.

As the 18th entry in the Paramount Presents line, Last Train from Gun Hill finally pulls into the Blu-ray station. I desperately want to sing the praises of the film’s transfer because it often looks jaw-droppingly incredible, but the distracting motion blur just takes the wind out of the sale for me. The audio is spot on without any issue and works wonders for the film. At the end of the day, I’m still calling this Recommended because the film itself is so damn good and much of the time the transfer looks amazing. It’s just that motion blur that keeps nagging at me. I’ve made inquiries to our Paramount rep about the transfer for clarification and I'd love to see a remaster reissue made to improve the video presentation. Fingers crossed something can be done there.