Clint Eastwood, John Sturges, Robert Duvall, John Saxon, Elmore Leonard - five legendary names in the Western Genre come together for Joe Kidd - a classic-style film dressed up as a 70s revisionist western that doesn't quite amount to the sum of its parts. While uneven in places with a few stumbles, the film offers some great action sequences and should delight ardent genre fans. Kino Lorber Studio Classics delivers a new Blu-ray of Joe Kidd with the same A/V presentation as before, but with some new bonus features. Worth A Look

Joe Kidd (Clint Eastwood) was the best hunter in the territory - man or beast. Whatever the terrain, whatever the target, he would find his mark and never miss. Tired of a life of killing, he spends his time divided between being a rancher and getting drunk and serving pointless sentences in jail. As Kidd is being sentenced for his latest spat, revolutionary Luis Chama (John Saxon) breaks into the courtroom challenging the land rights of white owners. Kidd is thrown into the middle of a war between Chama and the sadistic landowner Frank Harlan (Robert Duvall) who is ready and willing to do anything to hold onto the Mexican land he's claimed as his.

Joe Kidd at its core is a solid western. Shot throughout Arizona and California, it doesn't have the look and feel of a studio lot film with prefabricated recycled sets, but a big sprawling epic. The kind of film you'd naturally expect from a movie directed by John Sturges. There are colorful characters bringing any measure of menace or comic relief. There's action aplenty with a final shootout with a train crashing through a saloon for extra impact. It's the sort of spectacle one would expect from a Sturges movie. With new young talent like Clint Eastwood headlining and Robert Duvall and John Saxon in the supporting slots, Joe Kidd spins as a manhunt movie but with a 70s revisionist western flair that doesn't quite align with Sturges' classic style and Elmore Leonard's screenplay.

Coming in at under 90-minutes, Joe Kidd is a breezy fast movie in places, but also manages to drag in others. Where one moment you feel like the film has a straight course with a clear direction, the film can take odd tangents and left turns or wind up relying entirely on convenience. The script just doesn't feel complete, as if we're seeing segmented portions of a larger movie that probably ran half an hour longer. We know from the start that Frank Harlan is a bad guy; he travels with three paid assassins with an impressive arsenal. But as the film needs a big finale, three signature bad guys aren't enough, so randomly an entire army of hired guns is just written into the movie. The film already established Harlan as a man without honor willfully shooting Chama's men in the back as they rode away peacefully - but that wasn't gritty enough so he needs to hold a town hostage ready to kill innocent people unless Chama gives himself up. In between these moments, we get some lighthearted comedy and a few bits of scenery-chewing thanks to Plan 9 From Outer Space survivor Gregory Walcott and other random cast members. 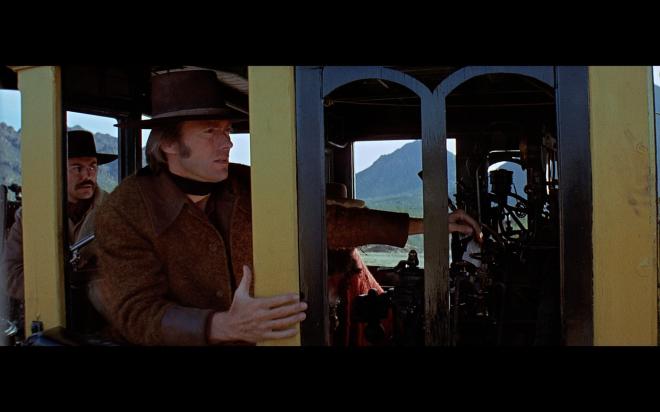 It's this strange juxtaposition that makes me feel that Joe Kidd was always a project better suited for a director with a harder edge to them. As Duvall's Frank Harlan becomes crueler and crueler and his men all the eviler, you can feel Sturges start to struggle with how far to take things - which is pretty well at odds with the cast he's playing with. By this time Eastwood had concluded his Man With No Name Trilogy, directed Play Misty for Me, and starred in Dirty Harry. His next film would be the hard-edged Western/Horror hybrid High Plains Drifter. This film in a lot of ways feels like a step back for Eastwood's tough-guy character he was so carefully cultivated at the time. As I watch Joe Kidd again, I can't help but feel like this was a better project for someone like Sam Peckinpah to execute - or Eastwood himself since he did a lot of the second unit work.

This isn't to say that Joe Kidd is a bad movie. Not at all. It's a perfectly entertaining and often fun film. Stumbles and odd bits aside, it's a perfectly satisfactory movie - but again that's faint praise for a movie of this pedigree. Whenever I see it come on TCM, I'm glad to be able to switch it on. If I'm browsing for a movie to watch and I spot it, more often than not I'll pull it off the shelf. I enjoy Joe Kidd, but I'm not always satisfied with it. I always feel like there was once a better movie planned somewhere down the line and things just didn't turn out as intended.

Kino Lorber Studio Classics locks up Joe Kidd on Blu-ray in a new single-disc release. Pressed on a Region A BD-50 disc, the disc is housed in a sturdy case with an identical slipcover and alternate reversible insert artwork. The disc loads to a static image main menu with traditional navigation options.

Joe Kidd arrives with an AVC-MPEG-4 transfer that only slightly improves upon its VC-1 counterpart from 2014. For all nuts and bolts concerns, this is the same transfer source. Same nicks and scratches, same color timing, same slightly noisy and unrefined grain field indicative of an older scan. The primary improvement I spotted here were ever so slightly better black levels. The previous release could dip into crush territories and while that overly thick black level is still apparent, it's not as crushed. It took a lot of disc flipping to start to see any real differences in the presentation but looking closely enough you can start to tell this new encode handles the workload better. But only so much. Grain is still pretty thick and noisy, there's still a crunchy quality to a lot of textures. Colors are nice and bold with plenty of strong primary pop - but of the Eastwood movies arriving from KLSC, this is one that could have used a fresh scan. Not bad overall, it gets the job done.

This release of Joe Kidd also comes armed with what sounds like the same DTS-HD MA 2.0 audio track - which again is a largely serviceable affair. When it counts most, the mix comes alive for the big action beats and the train crashing through the saloon maxes things out nicely. With that, atmosphere is pretty one-dimensional. A large portion of this film is out on the open range with rocky boulders, sandy terrain, and vast open sky, and yet there's nothing to give you the sonic equivalent feeling. It's still a pretty flat feeling track. Dialog comes through clean and clear throughout and the Lalo Schifrin score sounds great, but that's the best this mix has going for it.

Bonus features aren't the most robust ever committed to disc, but we're getting more here than we got with the previous release from Universal. Alex Cox once again delivers a nice and thoughtful commentary. I like his commentaries for these Eastwood releases as he's clearly a fan but he's not above pointing out some of the lingering faults nearly fifty years after the film's release. Don Stroud pops by for a new interview, it may be a short bit but it's nice to see the character actor share his memories here.

Joe Kidd may not be the best of Eastwood's westerns, but it's not a terrible movie either - it's just one that doesn't quite live up to its potential. With a movie directed by John Sturges, written by Elmore Leonard, produced and starring Eastwood with Robert Duvall and John Saxon backing him up - you naturally have pretty high expectations. What we have here is a traditional classic western stuffed into a revisionist take on the genre, and it's not the best fit. Entertaining, but not always fulfilling.

Kino Lorber Studio Classics hires on Joe Kidd for a new outing on Blu-ray. While the transfer got a new encoding, it's not a new restoration and only offers small improvements with what sounds like the exact same audio mix as before. New to disc is a solid audio commentary from Alex Cox as well as a new interview with actor Don Stroud. It's easy to call this release of Joe Kidd the better option for fans, but if you've already purchased this film on Blu-ray either in the single release or part of that 7-film Eastwood set from Universal, there's no hurry to upgrade. Worth A Look.