Folks in Black Rock have their own way of welcoming mysterious, one-armed stranger John J. Macreedy. He's welcome to leave. Or they'll make sure he leaves in a pine box. Two-time Academy Award(r) winner* Spencer Tracy (a 1955 Best Actor Oscar(r) nominee for this film) plays World War II veteran Macreedy, who keeps his own counsel about why he's come to Black Rock and who keeps his wits about him when confronted with threats and violence. Director John Sturges (The Great Escape) ramps up the tension while revealing Macreedy's mission and the town's grim secret. Robert Ryan, Walter Brennan, Ernest Borgnine and Lee Marvin are among the town's thugs and lap dogs. "I'm half horse, half alligator," one says. They'll find Macreedy is even tougher stuff. This timeless classic makes exceptional use of the then-new CinemaScope screen, set to a pulsating musical score by the great Andre Previn.

Economical filmmaking is a lost art. Woody Allen is perhaps the only director working today who would even consider releasing a movie with a runtime under 90 minutes. But back in Hollywood's heyday, such lean, mean pictures were commonplace, and when properly produced, they packed a potent punch. John Sturges directed several of these terse yet pointed films, often cramming equal parts style and substance into tightly constricted timeframes with distinguished flair. And he never did it better than in 'Bad Day at Black Rock,' a taut, engrossing contemporary western that brims with both suspense and resonating themes.

Running a mere 82 minutes, this brisk mystery barrels onto the screen with an urgent, in-your-face opening title sequence, then briefly backs off and allows the seeds of mistrust and unrest to germinate. Well-drawn characters, tense exchanges, and surprising revelations fuel the fire, leading to an explosive and affecting climax. But along the way, Millard Kaufman's layered, Oscar-nominated screenplay deftly weaves several incendiary issues into the film's fabric, including prejudice and discrimination, xenophobia, mob violence, fear of progress, and blind allegiance to a formidable, corrupt figure.

That last element is especially noteworthy, for it's no coincidence 'Bad Day at Black Rock' was mounted amid a wave of Communist hysteria spearheaded by notorious U.S. Senator Joseph McCarthy. MGM studio chief Dore Schary, a proponent of social issue films, personally produced the picture, and both his stamp of integrity and commitment to exposing troubling truths are evident throughout. From the moment John J. Macreedy (Spencer Tracy) steps off the train in the dusty, deserted town of Black Rock, just after World War II has ended in 1945, an air of suspicion swirls about him, fanned by a gaggle of belligerent townspeople who are admittedly wary of strangers.

And with good reason. According to the train's conductor, the Streamliner hasn't stopped in Black Rock for four years, so the sight of Macreedy striding across town with a spring in his step raises some eyebrows. The purpose of his 24-hour visit isn't clear at first, but when the soft-spoken man with a paralyzed left arm checks into the local hotel and inquires about a fellow named Kumoko and an area called Adobe Flat, he instantly rattles the nerves of a gang of idle cowboys led by Reno Smith (Robert Ryan), a sullen local who skulks around quietly intimidating those who disagree with him.

Reno takes an instant dislike to Macreedy and calls a private detective in Los Angeles to get the lowdown on him.  When nothing turns up, Reno gives one of his henchmen (Ernest Borgnine) the green light to get rid of Macreedy, who now suspects the townspeople are harboring a sinister and damning secret. As Reno and his posse try to bully Macreedy into revealing his motives, the one-armed stranger probes the town doctor (Walter Brennan), drunken sheriff (Dean Jagger), and a pretty young garage attendant (Anne Francis) in the hope of gleaning a few clues that might unlock the mystery that grips Black Rock like a vice.

Films about lone, righteous figures pursuing truth and courageously combatting a corrupt, frightened society have always been popular, and 'Bad Day at Black Rock' takes more than a leaf or two from such classics as 'High Noon' (which it most strongly resembles in tone and narrative structure), 'The Ox-Bow Incident,' and 'Johnny Guitar.' But its subtle yet forceful emphasis on the destructive forces of insidious racism, bigotry, fear, and closed-mindedness - as well as the fact that it takes place in the 20th century - blunt any blatant similarities and keep this film relevant. 'Bad Day at Black Rock' was one of the first movies to mention U.S. internment camps during World War II, and as we grapple today with changing immigration guidelines, a potential drop in diversity and inclusion, and the pressure to conform to the strict ideology of a new regime, this portrait of intolerance and strength in the face of adversity is tailor-made for our current political climate.

The film also addresses the obsolescence of both sleepy western towns and the mythic figure known as the American cowboy. As people gravitated toward cities and suburbs following World War II, one-horse outposts on the railroad gradually became extinct, as did the way of life that supported them. Reno and his cronies fear they will become forgotten men, and fight the changes they see coming the only way they know how...by intimidating others and inflating their own warped sense of importance. Surviving in this new, modern world won't be easy, but instead of embracing the challenge, they cling to the past and fiercely combat any force they view as a threat. And on one particular day, that threat is Macreedy.

Tracy, as he was so often in his career, is the movie's moral center, a thoughtful, even-tempered, earnest man whose admirable values lead him into a treacherous lion's den. His acting, as always, is invisible; we never forget he's Spencer Tracy, but his plain-speaking, almost nonchalant style allows him to disappear inside his characters. Without much visible effort, he brings to Macreedy a quiet strength and forceful conviction that make this disabled figure at times seem almost superhuman. It's a wonderfully understated performance that rightfully earned the veteran actor his fifth Oscar nomination.

Ryan is equally superb. He, too, underplays well, and his scenes with Tracy crackle with electricity. The tough, unassuming Ryan rarely got the credit he deserved during his long Hollywood career, but he files one of his best portrayals here. Brennan, Jagger, Borgnine (who would beat Tracy that year for the Best Actor Oscar for 'Marty'), John Ericson, and Lee Marvin also make memorable impressions, bringing additional authenticity to the film.

Though it bursts with substance, at its core 'Bad Day at Black Rock' is just a damn good movie. Tightly directed (Sturges also nabbed an Oscar nod), beautifully photographed by the great William C. Mellor, and packed with suspense, literate dialogue, and superior performances, this seething mystery masterfully merges elements of traditional westerns with the tension and darkness of film noir to create a picture that grabs you from the opening frames and doesn't let go until the end. Who says you can't craft a riveting piece of entertainment in 82 minutes? 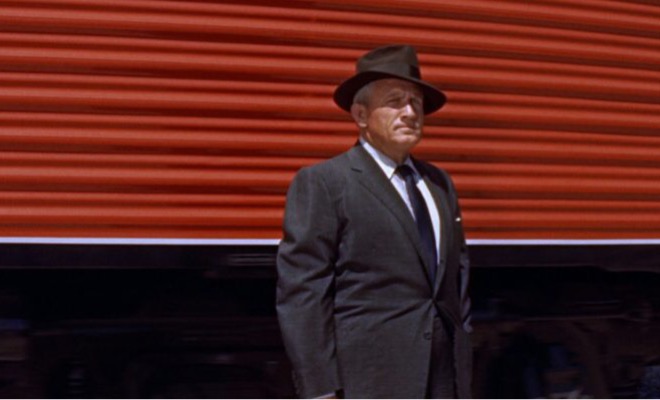 'Bad Day at Black Rock' arrives on Blu-ray packaged in a standard case. Video codec is 1080p/AVC MPEG-4 and audio is DTS-HD Master Audio 2.0 stereo. Once the disc is inserted into the player, the static menu with music immediately pops up; no previews or promos precede it.

Shot in CinemaScope, 'Bad Day at Black Rock' takes full advantage of the widescreen format, using it to enhance the enormity of the barren western landscape as well as the claustrophobic confines of cramped interiors, and Warner Archive's beautifully restored 1080p/AVC MPEG-4 transfer renders the image well. Splashes of vibrant color, especially the train's red and orange hues, offset the dusty, dilapidated exteriors, while superior clarity and contrast heighten the impact of fine details and promote a greater sense of depth. Faint but evident grain adds essential texture and lends the picture a lovely film-like feel, and no nicks, scratches, or stray marks dot the pristine source material. Black levels are rich and deep, shadow delineation is quite good (especially during the nocturnal climax), and flesh tones remain natural and stable throughout. There aren't many true close-ups in CinemaScope films, but the tight shots nicely highlight the wrinkles on Spencer Tracy's weathered face and Anne Francis' peaches-and-cream complexion. No crush or banding disrupt the presentation, and any digital doctoring escapes notice. This is another fine Warner Archive effort that will certainly please this film's legion of fans.

The DTS-HD Master Audio 2.0 track supplies wonderfully robust stereo sound that's both crisp and well modulated. Some distinct separation across the front channels - most noticeable during expanded scoring sequences - nicely widens the soundscape, and a wide dynamic scale maximizes the impact of both high- and low-end tones while keeping distortion at bay. All the dialogue is clear and easy to comprehend, and superior fidelity helps André Previn's rousing score fill the room with ease. Best of all, no age-related hiss, pops, or crackles intrude. 'Bad Day at Black Rock' may be 62 years old, but this excellent transfer makes it sound freshly minted.

Just a couple of extras - both of which have been ported over from the 2005 DVD - enhance the disc.

Taut, well written, and superbly acted by a jam-packed ensemble cast, 'Bad Day at Black Rock' isn't just a captivating western noir, it's a layered study of social injustice that's still scarily relevant today. Spencer Tracy files an Oscar-nominated performance as a suspicious stranger who becomes embroiled in a web of violence and deceit when he seeks to expose a sleepy western town's dark and shameful secret. Masterful direction by John Sturges heightens the tension while spotlighting a host of disturbing issues that separate this film from others in its class. Warner Archive's Blu-ray presentation may skimp on supplements, but features excellent restored video and crisp stereo sound, both of which help this 1950s classic earn a high and hearty recommendation.