The Great Escape returns to Blu-ray in an all-new Criterion edition that features an upgraded transfer, the original mono soundtrack in a lossless format for the first time, and a couple of new supplements. The improved picture quality enhances the impact and beauty of director John Sturges' classic epic about a group of Allied POWs who hope to bust out of a German prison camp, but some of the video issues that have dogged this stirring drama over the years remain unresolved. Still, the suspense, action, heroism, and scope of one of Hollywood's most beloved World War II films trump any technical deficiencies and produce a powerful viewing experience. The Great Escape is one of those movies that belongs in every cinephile's collection, and it's never been more impressively presented than it is here. Highly Recommended.

There have been dozens of World War II movies that focus on POWs, but the granddaddy of them all is without a doubt The Great Escape. Hefty in scope, bloated in length, yet still intimate and affecting, director John Sturges' ambitious 1963 epic about a stubborn group of Allied prisoners who devise a daring and daunting break from a German stalag remains an impressive mix of action, spectacle, male bonding, and wartime suspense more than a half century after its initial release. This absorbing portrait of gumption and grit may not depict events exactly the way they happened (as the producers claim in the prologue), but it's authentic enough to instill deep respect and admiration for the courageous, unselfish soldiers willing to risk everything for freedom.

Steve McQueen, James Garner, Richard Attenborough, Charles Bronson, Donald Pleasance, James Coburn, and David McCallum lead the motley band of "rotten eggs" who dig an elaborate network of tunnels in an ambitious attempt to liberate 250 British, American, and Australian soldiers. The film's first half meticulously - and sometimes tediously - details the planning and complex execution of the dangerous plot, but the pace picks up considerably once a handful of men bust out of the camp and literally run for their lives. That's when a sober study of ingenuity and steely wills morphs into an exciting, suspenseful action flick capped by a thrilling motorcycle chase through the German countryside. 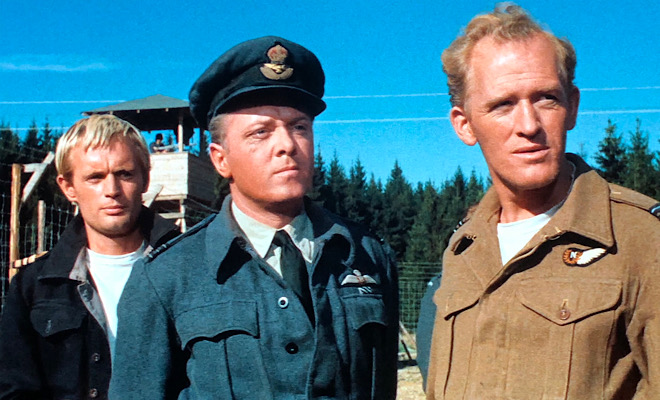 Sturges wisely develops the gallery of characters and builds their relationships so we're emotionally invested in their respective fates, and all the actors file colorful, sincere portrayals laced with an appropriate degree of bravado. Elmer Bernstein supplies the iconic theme that rings in your ears long after the movie ends, while cinematographer Daniel L. Fapp, who won an Oscar a couple of years earlier for West Side Story (and was nominated six other times), fills the widescreen canvas with sweeping images.

Like many 1960s epics, The Great Escape probably could have benefitted from some judicious trimming, but despite its almost three-hour running time, it maintains tension and puts us in the thick of the action like few World War II movies can. It also packs an unexpected emotional punch that makes it resonate and rise above other films in its class. Every list of essential World War II pictures includes The Great Escape, which lives up to the adjective in its title. It's not a perfect movie, but it's engrossing, exciting, and very memorable.

For a more complete review of The Great Escape by my colleague Michael S. Palmer, click here. 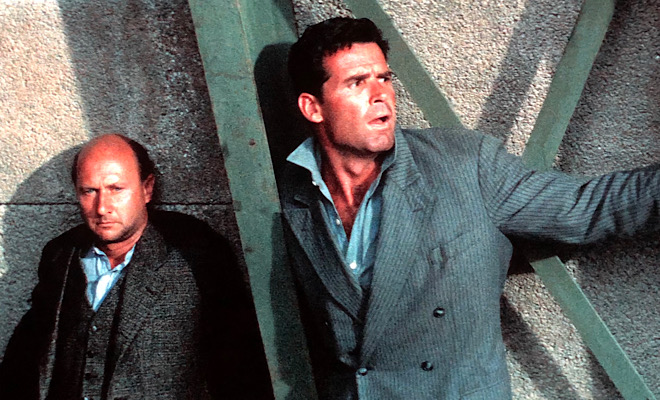 The Criterion edition of The Great Escape arrives on Blu-ray packaged in a standard Criterion case. A 10-page foldout booklet that features an essay by film writer Sheila O'Malley, a cast and crew listing, transfer notes, and an artist's rendering of the Stalag Luft Compound (alas, no photos from the film) is tucked inside the front cover. Video codec is 1080p/AVC MPEG-4 and default audio is LPCM mono. (There's also a remastered DTS-HD Master Audio 5.1 track.) Once the disc is inserted into the player, the static menu with music immediately pops up; no previews or promos precede it.

The Great Escape has always been a bit problematic on home video. Some of the issues are ingrained in the original film (emphasis on the grain), while others have been the result of subpar source prints. Criterion has sought to rectify as many of these thorny problems as possible, and has done a creditable job for the most part. According to the liner notes, the 4K digital restoration was undertaken by MGM. "A digital transfer was created in 10-bit 4K resolution...from the 35 mm original camera negative...A 35 mm interpositive was also scanned...Original Metrocolor prints of The Great Escape are badly faded, making accurate color references difficult to find. Color references for this edition included an original 35 mm dye-transfer print from the Academy Film Archive's Technicolor Reference Collection, a 35 mm acetate print owned by Martin Scorsese, and a 35 mm acetate print owned by Quentin Tarantino."

Though I don't have a copy of the 2013 Blu-ray transfer to compare it to (if you'd like to read my colleague Michael S. Palmer's assessment of it, click here), the Criterion edition seems to improve upon the 2013 transfer in some areas, but still must grapple with some of the nagging problems that have plagued home video versions of The Great Escape over the years. Criterion has done its best with the two most glaring issues - faded color and heavy grain in select sequences - but hasn't alleviated them. Still, the resulting 1080p/AVC MPEG-4 transfer likely produces the finest presentation of The Great Escape will we ever see.

The incredibly film-like presentation features noticeable grain throughout, but two exterior sequences - the Fourth of July celebration and segments of McQueen's escape - exhibit a heavier than normal layer that's baked into the original film. Interestingly, the night scenes look less grainy than some of the daytime scenes and benefit from excellent shadow delineation. Overall, the image is bright and vibrant, with good contrast and clarity highlighting fine details, such as the barbed wire fences, and producing a palpable sense of depth. 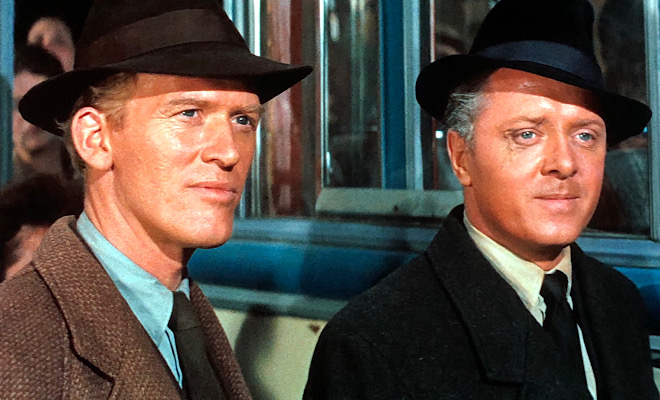 Some of the color is beautifully lush. The verdant greens of the German landscape, the crystal blue skies, and some red floral and signage accents punch up the picture and provide a nice contrast to the drab prison camp. Unfortunately, as in other video renderings, the hues in some scenes look depressingly anemic...the result of fading that has afflicted many films shot in single-strip color formats during the same period. (Metrocolor seems particularly susceptible to this.) This new transfer improves the color in many areas, but can't completely erase the ravages of both time and poor preservation practices.

Black levels are wonderfully rich, close-ups nicely showcase fine facial details, flesh tones appear natural and remain stable throughout, and costume textures are crisp. Sadly, though, a few other problematic elements from the previous Blu-ray edition crop up here as well. Dissolves are still a bit rough, and though the source material is practically spotless, the same nagging hairs or threads that dotted the bottom of the frame back in 2013 rear their ugly heads once again. The imperfections don't ruin the film, but they're just distracting enough to make us wish they weren't there.

Who knows if we'll ever get the perfect Great Escape transfer. Maybe one day we'll be lucky enough to see a 4K UHD release of this classic film and that will be the definitive edition. Until then, this Criterion effort will stand as the best rendering, and its strengths far outweigh its largely unavoidable weaknesses.

The previous Blu-ray edition of The Great Escape featured a fabricated DTS-HD Master Audio 5.1 soundtrack, but did not include the movie's original mono track as an alternate option. Purists will be pleased Criterion rights that wrong here. According to the liner notes, the original monaural track "was remastered from a 35 mm magnetic track," and the resulting LPCM presentation is quite good indeed. (Criterion also includes the DTS-HD MA 5.1 mix, but because High-Def Digest already reviewed that track back in 2013, I decided to watch the film with its original mono sound. For a full review of the 5.1 mix, click here.)

Mono is far from a dirty word when done right, and this clear, crisp, nicely detailed track won't make you miss multi-channel audio one bit. A wide dynamic scale gives all the effects plenty of room to breathe, but Elmer Bernstein's iconic score benefits the most. Superior fidelity allows the identifiable - and constantly recurring - theme to fill the room with ease, and all of its highs and lows exude a lovely depth of tone. Sonic accents Iike motorcycle engines, typewriter tapping, crunching dirt, and gunfire are all distinct, and the dialogue is nicely prioritized and easy to comprehend. Any age-related surface noise has been erased, leaving a clean, vibrant, and full-bodied track that perfectly complements the visuals.

All the supplements from the 2013 Blu-ray, with the exception of the The Great Escape: The Untold Story documentary and its additional interview footage, have been ported over to this Criterion edition. A new featurette and an audio commentary from the Criterion laserdisc edition are also included in this release.

The Great Escape lives up to its title. Director John Sturges' classic epic chronicling the awe-inspiring true-life escape of dozens of dogged POWs from a World War II German prison camp remains a powerful portrait of courage, ingenuity, patriotism, and integrity. It's also just a damn good movie packed with suspense, excitement, and terrific portrayals from a top-notch cast. This new Criterion edition spruces up The Great Escape as much as it can without compromising the film's original elements. The new transfer yields a more vibrant picture and richer color, but doesn't resolve the grain and fading issues that by now are baked into the movie's surviving prints. In addition to the fabricated multi-channel audio track that graced the previous Blu-ray release, Criterion provides the film's original mono track in a lossless format for the first time, as well as a new featurette and a commentary from their old laserdisc. (Almost all of the supplements from the 2013 MGM Blu-ray have been ported over as well.) If you don't yet own The Great Escape, by all means grab this Criterion edition, and even if the previous Blu-ray is already in your collection, you should strongly consider an upgrade. The improvements might not be major, but they're significant enough to merit attention. This is probably the best The Great Escape will look until we get a 4K UHD rendering, so if you're a diehard fan of this stirring classic, you might want to double dip. Highly Recommended.