One of the finest early films from writer-director Samuel Fuller, Pickup on South Street packs a gritty story, dazzling artistry, and a quartet of fine performances into its taut 80-minute running time. This crackerjack crime drama about a pickpocket, B-girl, crusty stoolie, and ruthless Communist spy ring seethes with street-wise attitude and looks stunning on Blu-ray, thanks to a gorgeous remastered transfer from Criterion. Robust audio and an array of absorbing supplements sweeten this top-notch presentation of a movie that's all too often criminally overlooked. Highly Recommended.

I consider myself quite well versed in classic cinema, but one director who's consistently escaped my gaze over the years and flown under what I thought was my very sensitive movie radar is Samuel Fuller. Thankfully, my gig reviewing discs at HDD has at last exposed me to the arresting artistry, searing passion, and warts-and-all truth of Fuller's work, and it's been an enlightening and enriching experience. Though I still have a lot of catching up to do when it comes to Fuller's films, reviewing The Crimson Kimono and Forty Guns made me realize what I've been missing and made me hungry for more Fuller fare. Pickup on South Street certainly satisfied that appetite and stands as the best Fuller flick I've seen so far. It also just might be the best film Fuller ever made.

A taut, absorbing, and exciting crime drama laced with noir overtones, Pickup on South Street showcases Fuller's distinctive, in-your-face style and features colorful, dimensional, ambiguous characters who instantly pique our interest and hold it until either their demise or the final fadeout. Fuller didn't create the characters, but he infuses them with flesh and blood through both his camera lens and crackerjack script that juxtaposes brutal toughness with a delicate tenderness and lays bare the moral and emotional conflicts churning inside us all. A writer long before he became a director, Fuller knows what makes people tick, and knows good and evil are far from black and white. 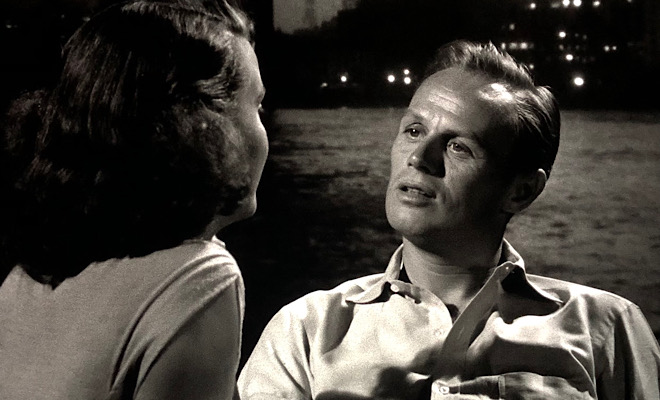 The gray areas that define us as human beings form the focus of Pickup on South Street, which showcases a quartet of petty criminals swept up in a web of Cold War intrigue. In the riveting opening scene, dapper pickpocket Skip McCoy (Richard Widmark) deftly snatches a sexy dame's wallet out of her purse on a packed New York City subway train and flees the scene before two undercover cops can catch him. When Candy (Jean Peters) discovers her wallet is missing in the lobby of an office building, she freaks out and calls her ex-boyfriend Joey (Richard Kiley), who arranged for her to deliver a piece of microfilm containing a "patent for a chemical formula" to a Communist contact.

Joey, of course, is furious and so are the undercover cops who were tailing Candy in the subway and poised to crack the nefarious spy ring once she made the drop. Both Joey and the police are desperate to find the thief who swiped the wallet so they can seize the microfilm. The cops and Candy, whose shady past may include prostitution, both enlist the services of Moe (Thelma Ritter), "the best pickpocket stoolie in the business," who - for a price - leads them to Skip, who at first has no clue an item so critical to America's national security is tucked inside the wallet.

The police try to appeal to Skip's patriotism, telling him, "If you don't cooperate, you'll be as guilty as the traitors who gave Stalin the A Bomb!," but Skip - who hates the Commies as much as the next guy - knows if he gets nailed for the theft, that'll be his fourth conviction and he'll go to prison for life. To save his skin, he plays both sides against the middle, denying his crime to the cops and telling Candy he'll turn over the microfilm for a $25K payoff. The dangerous game forces Skip into a corner, and when Candy begins to fall for him, he wonders whether she's just playing him for a sap. Tensions mount, loyalties are tested, tragedy ensues, and a thrilling showdown caps off the drama. 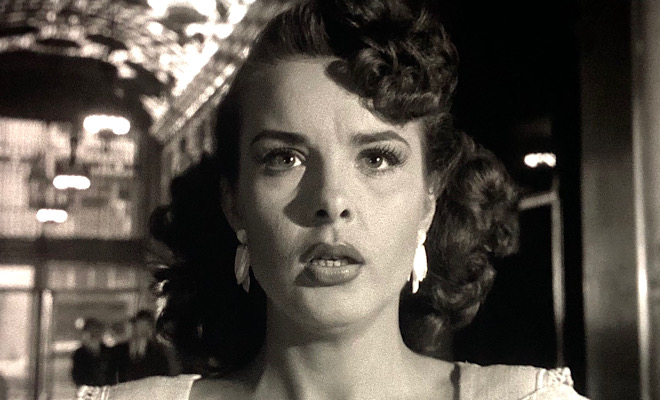 Fuller masterfully weaves the Cold War element into what is basically a gritty crime tale and peppers the narrative with his trademark violent confrontations and steamy liaisons. A shot of Peters in a bubble bath with a cigarette hanging out of her mouth is especially provocative, as is the shocking beating she endures at the hands of a vindictive Kiley. Women take a lot of abuse in Fuller's films, but the director always claimed he's just telling it like it is, not promoting misogyny. On the flip side, some of the movie's most tender and sincere speeches come from Candy and Moe, and one of them most certainly nabbed Ritter an Oscar nod for Best Supporting Actress. (She lost to Donna Reed in From Here to Eternity.) Fuller also lovingly photographs Peters, highlighting Candy's humanity.

Skip, Candy, and Moe are all lovable losers, spurned by society and trapped in an underworld they can't escape. They do what they have to to get by, but all harbor an innate sense of decency and abide by a personal moral code, both of which win our empathy and respect. Widmark has always been one of Hollywood's best good "bad" guys, projecting a tough-tender-tortured attitude that makes him an irresistible screen presence. Square-jawed yet baby-faced, he plays heroes and villains with equal aplomb, and here - as in the classic noir Night and the City - he deftly straddles the fence and files some of his most affecting work.

Peters, who might be best known for playing the perky newlywed who watches Marilyn Monroe torture Joseph Cotten in the classic film noir Niagara (as well as for marrying billionaire Howard Hughes a couple of years later), attacks Candy with uncommon vigor and brings her brilliantly to life. Monroe and especially Betty Grable coveted the part, but Fuller found Peters to be less sexy and more savvy, and her street-wise smarts and burning passion for Skip spice up the picture. 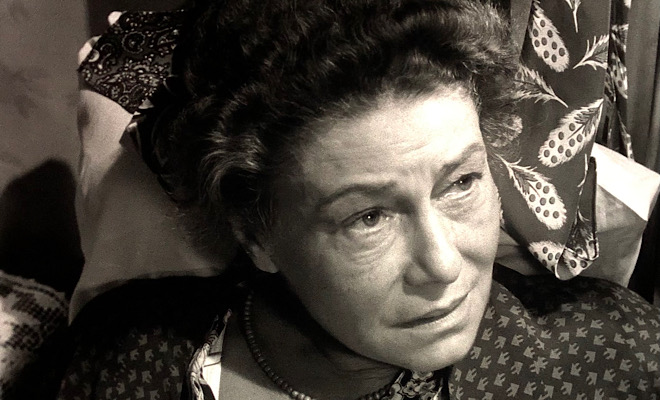 Ritter is heartbreaking as the crusty yet downtrodden stool pigeon who peddles gentlemen's ties on the side and whose only goal in life is to save enough money to pay for a plot in a fancy cemetery so she can die happy. Always authentic and often riveting, Ritter earned six supporting actress Oscar nominations over a 13-year period (the one for Pickup on South Street was her fourth in a row), and though she never won, she remains arguably the best in her field, crafting dozens of memorable performances and commanding the screen like few performers can.

A young Richard Kiley, who would later win two Tony Awards for musical turns, files an electrifying dramatic portrayal as the increasingly agitated and sadistic Joey. Kiley underplays well, but like a ticking time bomb he eventually explodes, and his bruising brawl with Widmark in the subway station and tunnel is thrillingly filmed.

An array of seamy, claustrophobic interiors and scads of striking extreme close-ups heighten the sense of unease while intimately connecting us with the shady, immensely fascinating characters. The opening subway scene (see clip below) teems with realism and Skip's ramshackle abode that's perched on stilts and juts out over the East River is a memorable set piece that reflects the tenuous nature of everyone's existence and relationships.

Why Pickup on South Street doesn't stand alongside Out of the Past and Double Indemnity as one of the all-time great film noirs remains a mystery. It's highly regarded, but not nearly as well known as it deserves to be. Maybe it's because Fuller was a Hollywood outsider who, like many of his characters, played by his own rules and resisted established norms. Whatever the case, his riveting visuals, pulsating pacing, and terrific script that expertly blends potent themes with crackling exchanges keep this cinematic train on track and hurtling toward its blistering climax. Pickup on South Street is raw, real, occasionally provocative, superbly acted, and boldly filmed. It's Fuller at his best, and once you see it, you'll hunger for more of this renegade writer-director's eclectic work...just like I do. 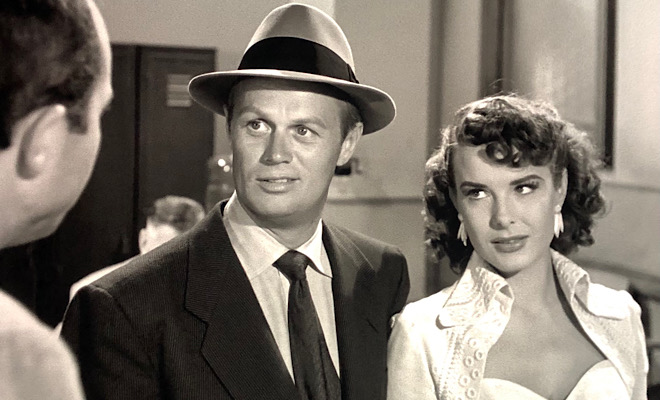 Pickup on South Street arrives on Blu-ray packaged in a standard Criterion case. A 28-page booklet that includes a 2004 essay by writer Luc Sante, an appreciation by director Martin Scorsese, an excerpt from Fuller's autobiography, a cast and crew listing, transfer notes, and several black-and-white scene stills is tucked inside the front cover. Video codec is 1080p/AVC MPEG-4 and audio is LPCM mono. Once the disc is inserted into the player, the static menu with atmospheric subway audio effects immediately pops up; no previews or promos precede it.

Criterion is uncharacteristically cagey about this new digital transfer, which was "created in 4K resolution" from "a 35 mm negative," but one thing is certain: it's a stunner! Fantastic clarity, pitch-perfect contrast, and beautifully resolved grain distinguish the gorgeous film-like presentation that faithfully honors the striking cinematography of three-time Oscar nominee Joseph MacDonald. Lush, inky blacks, bright, well-defined whites that resist blooming, and nicely varied grays produce an image that bursts with fine detail and flaunts plenty of depth. Excellent shadow delineation keeps crush at bay most of the time and adds a seductive noirish flavor to this hardcore crime drama. 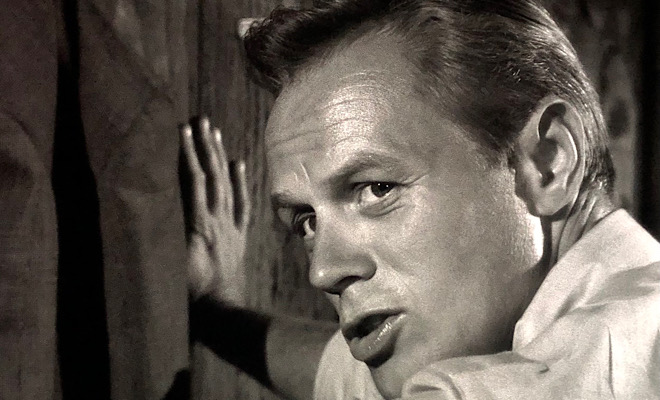 Fuller litters his film with wonderful extreme close-ups and this impeccable transfer maximizes their impact. The stubble on Widmark's cheeks and chin, the sweat glistening on the faces of Peters and Kiley, the wrinkles underneath Ritter's eyes...all these elements are crisply rendered, as are the myriad reflections in mirrors and glass and individual bricks on a high-angle shot of a cobblestoned street. Not a single nick, mark, or errant scratch mar the pristine source material and no digital anomalies break the spell. The clean, crystal clear picture shines a spotlight on all the gorgeous grime that laces this gritty film and helps this glorious transfer rank as one of Criterion's best recent efforts.

According to the liner notes, "the original monaural soundtrack was remastered from the 35 mm optical soundtrack negative," and the resulting LPCM audio provides robust, perfectly modulated sound. The rumbling, squeaking, squealing, and rattling of the subway is especially vibrant; fisticuffs, gunfire, and the clanking of Peters' cheap costume necklaces and bracelets are also distinct; and the teeming aural atmosphere of the (manufactured) New York cityscape brims with life. A wide dynamic scale handles all the sweeping highs of the jazzy score by Leigh Harline (who won Oscars for his music for Walt Disney's Pinocchio and its iconic theme song "When You Wish Upon a Star" a dozen years earlier) without any distortion, while strong bass frequencies punctuate the on-screen action and add depth to the track. (A moaning saxophone sounds especially lush.) All the snappy dialogue is clear and easy to comprehend, and no age-related hiss, pops, or crackle crop up. The potent audo nicely complements the top-notch video and together the two produce an immersive cinematic experience.

Several supplements add context and perspective to this excellent film.