Crimson Kimono stars Glenn Corbett and James Shigeta as Korean War army buddies, working side by side with the LA homicide squad. When stripper Gloria Pall is murdered, Corbett and Shigeta are sent to investigate. Both are smitten by the lovely Victoria Shaw, who is implicated in the crime. Corbett becomes jealous of Shigeta, who is deeply hurt, feeling that Corbett's animosity is borne of racism. Their friendship, and the central romance, is resolved after the detectives bring the murderer to heel in Los Angeles' Little Tokyo. Samuel Fuller's love of oriental exotica is never more pronounced than in the climactic sequences, staged before the backdrop of the Japanese New Year celebration.

In the late 1950s, writer-director Samuel Fuller wanted to make a film about reverse racism as seen through the eyes of an Asian protagonist. Not exactly the most marketable idea (especially given the conservative timbre of the times), but Fuller was a champion of socially conscious movies and was determined to get his independent, sure-to-be controversial film financed. So in an inspired move, he concocted a film noir plot to pique the interest of Columbia Pictures chief executive Harry Cohn, who took the bait and bankrolled what became The Crimson Kimono, a nifty B movie that cleverly uses a noir framework to mask its more serious and thought-provoking agenda.

Shot with a mixture of sensationalism and sensitivity, The Crimson Kimono gives us the best of both cinematic worlds. Its rough-and-tumble detective story draws us in, but about halfway through the narrative, Fuller shifts gears and turns his laser focus on an interracial romance and the deep-seeded feelings of resentment and perceived prejudice it provokes. The hot-button themes hijack the picture - so much so, in fact, noir aficionados might feel somewhat cheated. It's difficult to merge hard-edged noir with softer romance and personal introspection, and the marriage here doesn't always work, but it's a fascinating approach, and Fuller tries his damnedest to pull it off.

The film begins in a formulaic fashion, opening with the murder of Sugar Torch (Gloria Pall), a notorious stripper who's gunned down in the middle of a busy Los Angeles street following one of her provocative performances. Two tough cops who fought side-by-side in the Korean War - Charlie Bancroft (Glenn Corbett) and his Japanese-American best friend, Joe Kojaku (James Shigeta) - take the case and are struck by a portrait of Sugar in a crimson kimono that hangs in her dressing room. They learn the salacious entertainer planned to produce a Japanese-themed act, and their resulting investigation takes them into the seedy Asian neighborhoods of L.A., where the pieces of the twisted puzzle begin to fall into place.

One of their leads is Christine Downes (Victoria Shaw), an art student who supplies a sketch of a potential suspect. The macho Charlie takes a shine to her, and she seems to return his affection. But when Christine spends an unexpected evening alone with Joe, she taps into Joe's spiritual side and realizes they share a mutual regard for art and music. The two fall in love, yet when Joe breaks the news to Charlie, he mistakes Charlie's pain for racism. Years of suppressed anger and hurt bubble to the surface and a rift ensues, jeopardizing both their long-standing friendship and the outcome of the murder case.

Fuller was a writer long before he became a director, and his script crackles with colorful dialogue and showcases an array of offbeat characters. (Anna Lee is particularly delightful playing against type as a boozy middle-aged broad who pals around with Charlie and Joe.) Yet when the story turns serious, so does Fuller, and Joe's speeches about the discrimination he has experienced and the indelible, inescapable pain that still eats away at his soul are beautifully constructed. Shigeta, whom most moviegoers will remember as Joseph Takagi in Die Hard, passionately delivers them, and his emotional performance elevates the film. The rugged Corbett in his film debut asserts himself well, exuding a square-jawed toughness that suits the movie's noir portions well, and Shaw is good, too, but is often overly cool and aloof.

The Crimson Kimono was shot on a shoestring budget, but Fuller makes every penny count, crafting a lively, important drama that was years ahead of its time. You've got to hand it to a committed, fearless filmmaker willing to take on a taboo topic and tackle it in an uncompromising fashion. Eight years before Guess Who's Coming to Dinner?, Fuller depicted interracial romance with insight and grace, and though The Crimson Kimono lacks gloss and polish, its rough-around-the-edges style lends its message an authenticity more carefully constructed movies lack. And that keeps this B movie relevant almost 60 years later. 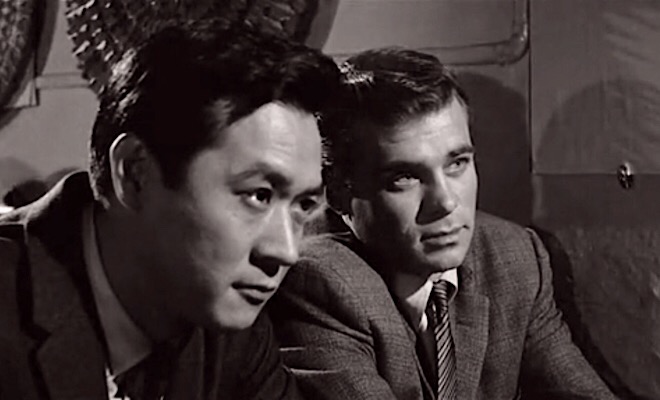 The Crimson Kimono arrives on Blu-ray in a limited to 3,000 edition packaged in a standard case. An eight-page booklet featuring an essay by film writer Julie Kirgo, three black-and-white scene stills, and a full-color reproduction of the movie's poster art is tucked inside the front cover. Video codec is 1080p/AVC MPEG-4 and audio is DTS-HD Master Audio 1.0. Once the disc is inserted into the player, the static menu without music immediately pops up; no previews or promos precede it.

Twilight Time's 1080p/AVC MPEG-4 transfer nicely honors this B-movie classic and Sam Leavitt's stark cinematography, but a few faults keep it from garnering a top rating. Severely fluctuating grain is the most troubling issue. Some scenes are crystal clear, with pitch-perfect contrast and superior detail levels, while others are inhibited by excessive grain and a nagging muddiness that overwhelm the image. Such jarring shifts in texture are unfortunate because they take us out of the action, but thankfully they're balanced by rich, inky blacks, crisp whites, and excellent gray scale variance. Much of the film transpires at night, but terrific shadow delineation minimizes the impact of any instances of crush. Close-ups are razor sharp, highlighting the sweat that often drips from the actors' faces, as well as facial lines and hair follicles. Only a few errant marks dot the pristine source material, and no evidence of digital doctoring could be detected. B movies don't always age well, but despite some hiccups, The Crimson Kimono looks quite good overall, and this transfer surely outclasses any other home video presentation.

The DTS-HD Master Audio 1.0 track supplies clear, well-modulated sound. Terrific fidelity and tonal depth lend Harry Sukman's brash yet elegant score a commanding presence that belies the single-channel output. Sonic accents like gunfire and fisticuffs are startlingly distinct, and subtleties like street noise come through cleanly as well. Most of the dialogue is clear and comprehendible, and no age-related malaises like hiss, pops, and crackles muck up the mix. This is a surprisingly potent track that aptly reflects all of the film's varied moods and timbres.

Both extras from the 2009 DVD have been ported over to this Blu-ray release.

Featurette: "Samuel Fuller: Storyteller" (HD, 24 minutes) - This excellent profile features comments from directors Martin Scorsese, Curtis Hanson, and Wim Wenders, actor Tim Robbins, and family members Samantha and Christa Fuller, all of whom offer great insight into what made Fuller tick. Wenders calls him "the greatest storyteller I ever met in my life," while Hanson admits he admired Fuller as an artist, but respected him as a man and how he handled adversity. We learn about Fuller's newspaper background and development as a writer, his penchant for long takes, his love of the filmmaking process, and how he sold The Crimson Kimono as a film noir because no studio would touch a project about racism. Clips from The Crimson Kimono and other Fuller films, as well as many rare photos, flesh out this absorbing tribute to a highly skilled and often misunderstood director.

Featurette: "Curtis Hanson: The Culture of The Crimson Kimono" (HD, 9 minutes) - Hanson returns for this reverent examination of the film and Fuller's impact upon it. He notes Fuller despised racism and racists, which fueled his passion for The Crimson Kimono, and points out instances where Fuller tries to educate his audiences about Japanese society in the U.S. Hanson also discusses casting, and closes by stating Fuller's "world view [and] point of view on social issues, human issues, cultural issues [are] unique and so clearly expressed in each of his pictures."

There's a lot more to The Crimson Kimono than meets the eye. What starts out as a gritty murder mystery involving a sleazy stripper evolves into a highly charged love triangle between two cops - one American, one Asian - and the woman who's torn between them. Racism plays a major role in the proceedings, and the controversial topic adds depth, complexity, and a welcome edge to this B movie, helping it rise above traditional film noirs. Solid video and audio transfers and a few good supplements distinguish Twilight Time's limited edition Blu-ray presentation, which honors this often neglected Samuel Fuller film. Recommended for noir aficionados and fans of Fuller's no-nonsense style.