Barbara Stanwyck was one tough broad. By portraying countless strong, independent, intelligent women and taking charge of her own career, she thrived in a male-dominated industry and advanced the cause of feminism on screen and off. Stanwyck was also one of the few Hollywood actresses of her day to pursue roles in westerns, appearing in 10 of them over a 20-year period (and that doesn’t include her popular 1960s TV series The Big Valley). She reportedly loved the outdoors and the physical rigors western films required, and could certainly handle herself on horseback. She even often did her own stunts.

In 1957, Stanwyck turned 50 years old and found good parts hard to come by. Yet writer-director Samuel Fuller came to her rescue and gave her one last gift before the sun set on her big screen career. Forty Guns would mark Stanwyck’s final romantic role in a feature film, but she goes out with a proverbial and literal bang, portraying a woman who encompasses all of the qualities that made Stanwyck an attractive, inspirational, and enduring star. And because Fuller is at the helm, this taut, exciting, and often visually arresting western is just as fine as its leading lady.

Forty Guns was supposed to be called Woman with a Whip, but 20th Century Fox deemed that title a tad too provocative for contemporary audiences. Nevertheless, it perfectly encapsulates Stanwyck’s character. The beautiful and unscrupulous Jessica Drummond runs her massive ranch near Tombstone, Arizona with an iron hand, using her wiles - and her whip - to keep her 40 hired hands under her thumb. While her business practices might not always be above board, she makes no excuses for her actions. Her trouble-making, much-younger brother Brockie (John Ericson) is a pugnacious thug, yet Jessica, despite abhorring his aberrant behavior, continually protects him.

Tensions rise when the three Bonell brothers come to town with a warrant for one of Jessica’s men, who‘s been accused of robbing the U.S. Mail. Once a notorious bounty hunter, Griff Bonell (Barry Sullivan) now works for the government, and though he carries a gun, he refuses to use it. Much like Gary Cooper in High Noon, Griff finds himself in an antagonistic environment that challenges his peaceful principles, especially when violence touches his own family. He and Jessica initially clash, but she respects his strength and an attraction develops. A series of dramatic events, however, will test both their love and their commitment to the things they hold most dear.

At just 80 minutes, Forty Guns zips along and packs plenty of action into its compressed running time. In addition to a few shootouts, Fuller stages an impressive tornado sequence that eclipses the one we all remember in The Wizard of Oz. Yet that’s only one virtuoso moment in a picture that’s packed with them. Fuller loved sprinkling creative camera shots throughout his films, and his use of extreme high and low angles, tight close-ups (unheard of in CinemaScope), long tracking shots, and subjective perspective (he shoots one image through the scope of a rifle) enhance the movie’s excitement. His terse script is also spiced with some pretty suggestive sexual innuendos and double entendres. The most famous exchange features Jessica gesturing toward Griff’s gun at the dinner table. "May I feel it?" she asks. Griff demurs. "Just curious," Jessica says. "It might go off in your face," Griff replies. Jessica wryly smiles. "I’ll take a chance."

Despite competing with dozens of men, Stanwyck dominates every scene in which she appears. Jessica takes no prisoners and as an actress, Stanwyck doesn’t either. Her natural, unmannered style makes her intensely believable, and watching her gallop at breakneck speeds on horseback, crack a whip, and strut across the plain in her cowboy boots only increases the authenticity she brings to the part. During the thrilling tornado sequence, Jessica is thrown from her horse and dragged a considerable distance. The film’s stunt man said the stunt was too dangerous and refused to do it. The 50-year-old Stanwyck then stepped up and insisted on performing the stunt herself. And she reportedly had to do it three times before Fuller was satisfied with the shot. In a nutshell, that’s Barbara Stanwyck, and that’s just one more reason why audiences love her and why her movie crews did too.

Forty Guns bids a fond adieu to the American frontier, and in between gunfights, its characters grapple with adapting to a more modern and civilized way of life. The film depicts the end of an era, and for Stanwyck, it was the end of an era as well. After almost three decades of starring roles on the big screen, Stanwyck transitioned to the small screen, where she also achieved considerable success. Forty Guns would be something of a swan song for Stanwyck, and a fitting one at that, but Fuller’s film also stands on its own as a top-notch western that bridges the gap between the old Hollywood and the new. It’s a crackerjack picture that fires on all cylinders and does its genre proud. 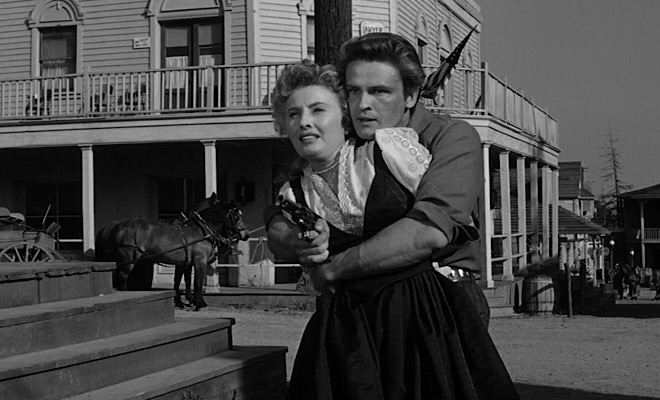 Forty Guns arrives on Blu-ray packaged in a standard Criterion case. A 32-page booklet featuring an essay by Fuller biographer Lisa Dombrowski, an excerpt from Fuller’s own memoir chronicling his experiences on Forty Guns, rare photos from the set, a cast and crew listing, and transfer notes is tucked inside the front cover. Video codec is 1080p/AVC MPEG-4 and audio is LPCM mono. Once the disc is inserted into the player, the full-motion menu with music immediately pops up; no previews or promos precede it.

Criterion presents an all-new 1080p/AVC MPEG-4 transfer struck from the 35 mm original camera negative and created in 4K resolution. As one might expect, the picture quality is often stunning. Grain is evident but seamlessly resolved, so the image maintains a filmic feel, and though contrast runs a tad hot at times, the overall gray scale is nicely balanced, featuring rich blacks and crisp whites. Fuller’s inventive camera angles supply palpable depth, and details, such as the fine hairs on Stanwyck’s cheeks, are wonderfully vivid. Close-ups - especially the extreme tight shot on Sullivan’s face - are razor sharp, and nary a nick or scratch sully the pristine source material. With all of its wide vistas and exterior scenes, Forty Guns demands a top-notch transfer, and Criterion delivers with a superior effort that makes this muscular western come alive.

According to the liner notes, the LPCM mono track was "remastered from the 35 mm optical soundtrack positive," and the results are very good indeed. While a remastered 5.1 track really would have opened up this widescreen western, the mono track supplies surprising oomph when played at the appropriate volume. The thundering stampede of horse hooves during the opening sequence is exceptionally well rendered, as are the howling winds during the thrilling tornado scene. Subtleties play well, too. Chirping crickets and footsteps against floorboards are distinct, gunfire is crisp and powerful, the music score by Harry Sukman fills the room with ease, and all the dialogue is easy to comprehend. Best of all, no age-related hiss, pops, or crackle intrude.

Criterion includes several absorbing supplements that really get under the skin of the film, its director, and its star.

The story of a tough, unscrupulous female ranch owner who dominates the men who work for her, Forty Guns is a brisk, exciting, and inventively shot western that showcases writer-director Samuel Fuller at the top of his game and the legendary Barbara Stanwyck in her final starring role in a feature film. Newly restored video, lossless audio, and plenty of top-flight supplements distinguish Criterion’s excellent Blu-ray presentation, which comes highly recommended.

Sale Price 21.04
List Price 39.95
Buy Now
3rd Party 15.59
In Stock.
See what people are saying about this story or others
See Comments in Forum
Previous Next
Pre-Orders
Tomorrow's latest releases