Night and the City - Criterion Collection

Two-bit hustler Harry Fabian (Richard Widmark) longs for a life of ease and plenty. Trailed by an inglorious history of go-nowhere schemes, he tries to hatch a lucrative plan with a famous wrestler. But there is no easy money in this underworld of shifting alliances, bottomless graft, and pummeled flesh—and Fabian soon learns the horrible price of his ambition. Luminously shot in the streets of London while Hollywood blacklisters back home were closing in on director Jules Dassin, 'Night and the City,' also starring Gene Tierney, is film noir of the first order, and one of Dassin’s crowning achievements.

"I just want to be somebody."

Don't we all. But few of us allow the quest for notoriety to consume every waking moment of our lives. Harry Fabian (Richard Widmark) does, and his desperation drives him like a magnet to every get-rich-quick scheme, petty scam, and fraudulent deal he can sniff out. With starry-eyed optimism, the manic, child-like Harry believes his fortune lies around every corner, yet this no-good loser and user always lets it slip through his grasp. Few lead characters are less likable and engender less sympathy than Harry, a ruthless hustler without a conscience and smooth operator who's always looking for an angle.

'Night and the City,' a breathlessly paced, complex, and gritty film noir from director Jules Dassin, is all about darkness - in the streets, in shady alleys, and in the souls of men and women who fight and claw to grab a morsel off the table of life. A gallery of grotesques populate the bleak tale (freely adapted from a well-known novel by Gerald Kersh), piling manipulation upon manipulation as they try to keep their heads above water, squeeze out their adversaries (and allies), and save their own skin. This is noir at its nastiest, and Dassin - perhaps disillusioned by an industry that would soon turn its back on him (blame Senator Joseph McCarthy) - pulls out all the stops, shooting much of the film in dingy locations, constructing memorable images of entrapment, and spotlighting several tense, volatile exchanges. The aura of dread never dissipates and the brutal denouement provides a final punch in the gut.

The city in the title is London, which lends itself well to noir, and Dassin photographs its urban landscape and shadowy underbelly with great care. He sets the stage with a couple of establishing shots, and then it's off to the races. We see a frantic Harry being chased through the streets trying to evade a dogged pursuer, and for the balance of the film he keeps running, often literally but always figuratively, and by the time the climax rolls around he's mentally and physically exhausted. His lovesick girlfriend Mary (Gene Tierney), against her better judgment, enables him by giving him money and propping up his bruised ego, but his highly fertile imagination spawns delusions of grandeur everyone knows will never come true. "Harry's an artist without an art," his neighbor Adam (Hugh Marlowe) tells Mary. He grasps at various straws, but can never hang on long enough to close a deal. Stuck in a dead-end job hustling tourists into a seedy gentleman's club run by the oily, rotund Philip Nosseross (Franicis L. Sullivan) and his calculating wife Helen (Googie Withers), Harry longs for his big break and a cushy life on easy street.

Nobody believes he'll get either one, but doubt and disapproval only spur Harry on to prove everyone wrong, and his "I'll show them all" attitude peaks when he seizes an opportunity to become a pro wrestling promoter and bust up the crooked syndicate of Kristo (Herbert Lom), a slick gangster who makes bank by presenting phony bouts all for show (much like the contemporary WWF). Kristo's father, Gregorius (Stanislaus Zbyszko), a legend in the world of classical Greco-Roman wrestling (still an Olympic sport today), reviles his son's racket, which disrespects the sport, and allows Harry to manipulate his young protégé into a match with The Strangler (Mike Mazurki), a barbaric Neanderthal out for blood. The old school versus new school showdown puts Harry on the brink of becoming London's wrestling kingpin, but his entanglements with Nosseross and Helen, Kristo's wrath, and his own web of deception threaten to pull the rug out from under him once again.

Influenced by Italian neo-realism and American post-war cynicism, 'Night and the City' depicts a corrupt, selfish, money-grubbing society where human life is cheap and double-crosses are as common as handshakes. Dassin doesn't pull any punches as he hurls us headlong into the dirt and grime of London's East End and introduces us to an array of predatory crooks, derelicts, thugs, and opportunists, all of whom are looking out for number one and won't think twice about betraying their closest friend...especially if there's money involved. The feeling of claustrophobia and the world closing in without any chance of escape at times feels almost oppressive, but the film's mood, tone, and pacing are some of its greatest strengths. There's also a riveting wrestling scene between Gregorius and The Strangler that brims with agonizing tension and sets up the movie's devastating final act.

Dassin's style fuels the film, but the actors shine, too. Widmark electrifies as Harry, filing one of his most memorable and finely etched portrayals. Harry's high energy, in-your-face intensity, and ceaseless drive must have made him exhausting to play (not to mention all that running!), but Widmark embraces the deeply flawed, pathetic, contentious character and infuses him with a manic vitality. The diabolical laugh that made him famous when he pushed an old lady in a wheelchair down a flight of stairs in 'Kiss of Death' three years earlier crops up a couple of times here to terrific effect, and he and Tierney, who's wasted in a thankless role (but always looks gorgeous, even without makeup), connect well during their far too few exchanges. Withers, as a heartless, grasping femme fatale, nails her part (and leaves other, better known noir sirens in the dust), as does Sullivan, who alternately recalls Sydney Greenstreet and Monty Woolley, yet eclipses them both.

Dassin, of course, could well relate to the no-way-out theme and air of hopelessness that swirl around 'Night and the City.' Targeted by the House Un-American Activities Committee for a benign association with the Communist Party more than a decade before, Dassin knew his days as a film director were numbered (he would be officially blacklisted after 'Night and the City' was completed and wouldn't helm another movie until the acclaimed 'Rififi' in France five years later), but he made the most of them, crafting one of the finest film noirs in cinema history - tough, uncompromising, real. Much like Dassin himself. 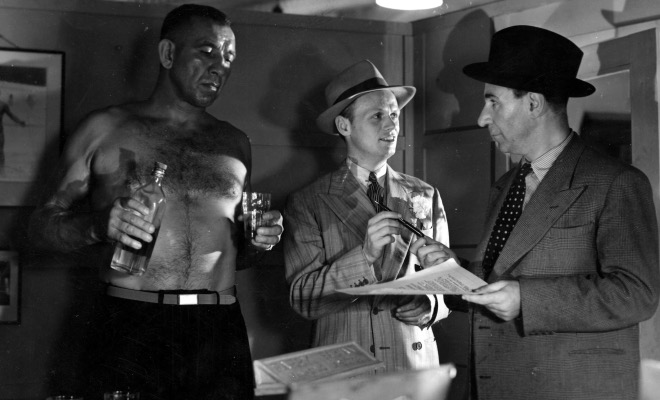 'Night and the City' arrives on Blu-ray packaged in a standard Criterion case. An eight-page fold-out booklet, featuring an essay by film scholar Paul Arthur, a cast and crew listing, transfer notes, and a few black-and-white stills from the film (all laid out as if it were a newspaper article), is tucked inside the front cover. Video codec is 1080p/AVC MPEG-4 and audio is LPCM mono. Once the disc is inserted into the player, the static menu with music immediately pops up; no previews or promos precede it.

'Night and the City' employs a host of London locations, but unlike many films of the period, the image quality of exterior and interior scenes remains consistent. A bit more grain and slightly higher exposure level can be detected during daytime sequences, but this 1080p/AVC MPEG-4 transfer from Criterion, newly mastered in 4K from the original 35 mm camera negative, possesses a seamless feel that neutralizes any subtle shifts in tone. Noir films demand excellent contrast, and this superior effort has it in spades, along with terrific clarity and a pleasing sense of depth. Shadows are deliciously inky, yet plenty of detail still can be detected, and nocturnal scenes burst with a stunning lushness. A nicely varied gray scale nicely balances the picture, and patterns, such as Harry's plaid suits, are rock solid without a hint of shimmer. Costume textures come across well, too, and close-ups showcase both Tierney's movie star glamour and the sweaty bodies and craggy faces of the burly wrestlers. Only a stray mark or two sullies the pristine source material, and any digital doctoring escapes notice. When black-and-white is done right, it's as seductive as Technicolor, and this top-notch transfer makes the dingy alleyways and seedy establishments of London's underbelly look almost beautiful.

The LPCM mono track, which was remastered at 24-bit from the 35 mm magnetic track, supplies surprisingly robust audio that heightens the tension of this gritty film noir. Franz Waxman's bold, melodramatic score sounds especially rich and full-bodied, filling the room with ease. Urban elements, such as traffic and crowd noise, subtly augment the soundscape, and all the dialogue is clear and easy to comprehend. No age-related hiss, pops, or crackles are present, and only a few instances of mild distortion during notably loud moments intrude. For a 65-year-old movie, 'Night and the City' sounds very good indeed.

A solid selection of supplements adds insight and perspective to this release.

One of the nastiest, most realistic, and most thrillingly constructed film noirs of Hollywood's Golden Age, 'Night and the City' maximizes the genre's gritty elements as it explores the twisted desires and tangled schemes of a gaggle of ruthless underworld characters. Director Jules Dassin captures the shady side of London with a keen eye, and his rough-and-tumble portrait of a petty hustler's bid to become the kingpin of pro wrestling is a showcase for the underrated talents of actor Richard Widmark and a host of excellent supporting players. Criterion's Blu-ray presentation features superior video and audio transfers, an alternate version of the film, and several engaging extras, all of which help this searing, brutal film earn a top recommendation.

Sale Price 20.7
List Price 39.95
Buy Now
3rd Party 11.69
In Stock.
See what people are saying about this story or others
See Comments in Forum
Previous Next
Pre-Orders
Tomorrow's latest releases