Each Dawn I Die

Any discussion of classic movie tough guys always includes James Cagney and George Raft, as it should. Both actors played an array of gangsters, hoods, and pugnacious thugs to great critical and popular acclaim during their multi-decade careers...so much so audiences had trouble accepting them as anything else. Amazingly, the two icons only made one film together, but it's a humdinger that perfectly encapsulates their patented screen personas. It's also a crackerjack prison drama that epitomizes the type of social-issue, ripped-from-the-headlines fare Warner Bros produced with clockwork regularity during the 1930s.

Each Dawn I Die exposes deplorable prison conditions, inmate abuse, political corruption, and an overly strict penal system within the framework of the gangster genre. Though it's chock full of vital, disturbing themes, the film never forgets it's a Cagney-Raft vehicle and brims with the intensity and excitement the two titans bring to all their work. Whether they're snapping at each other, quietly conspiring, throwing punches, or dealing with the devastating effects of solitary confinement, Cagney and Raft - together and apart - consistently command the screen. 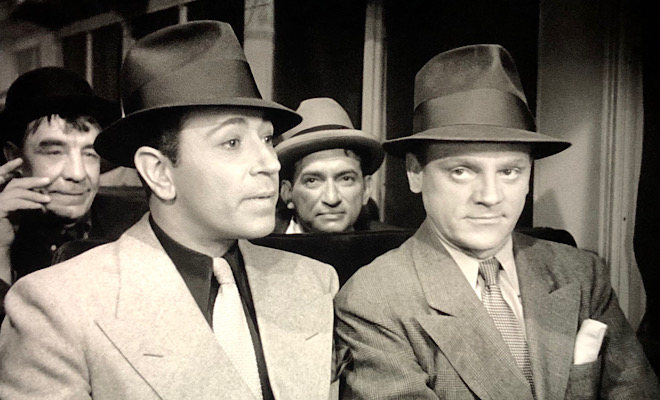 When investigative newspaper reporter Frank Ross (Cagney) witnesses district attorney (and gubernatorial candidate) Jesse Hanley (Thurston Hall) and a group of accomplices burning the financial ledgers at Hanley's construction company, he writes a scathing story that exposes the crime. To retaliate, Hanley dispatches a couple of henchmen to ambush Frank, render him unconscious, put him behind the wheel of a car, douse him with alcohol, and send the vehicle careening toward a crowded intersection. The resulting crash kills three innocent people and gets Frank convicted of manslaughter.

On the train to prison, Frank meets hardened criminal "Hood" Stacey (Raft). The two men become friends and later allies against both jailhouse rats and a sadistic guard. At first, Frank believes the wheels of justice will eventually set him free, but after his reporter girlfriend Joyce (Jane Bryan) can't find a way to exonerate him and the parole board lets him down, he becomes embittered. Stacey promises to hunt down those who framed Frank if Frank helps engineer Stacey's escape from prison, but their pact hits some snags that jeopardize their friendship, freedom, and lives.

Director William Keighley, famous for fast-talking, rapidly paced pictures, wisely slows things down just enough to heighten the impact of the stark, harsh prison atmosphere and brutal events that transpire there. Keighley's straightforward, no-nonsense style suits the material well, and the script by Norman Reilly Raine (who won an Oscar the previous year for his screenplay for The Life of Emile Zola) and Warren Duff expertly blends action with crackling dialogue and honest emotion.

Cagney and Raft, though, make the film come alive. Cagney's brash, fiery nature nicely complements Raft's more subdued machismo, creating a combustible partnership that stands the test of time. Both actors battled the studio system, but whereas Cagney fought for meatier, more relevant roles, Raft became best known for turning down such plum parts as Sam Spade in The Maltese Falcon, Roy "Mad Dog" Earle in High Sierra, and - most notably of all - Rick Blaine in Casablanca. (Interestingly, all of those roles eventually went to Humphrey Bogart and made him one of Hollywood's most iconic and enduring stars.) Though The Roaring Twenties stands as Cagney's best 1939 film (when oh when will that classic gangster flick enjoy a Blu-ray release?), Each Dawn I Die also showcases the actor's finest attributes and cements his reputation as the screen's premier tough guy. 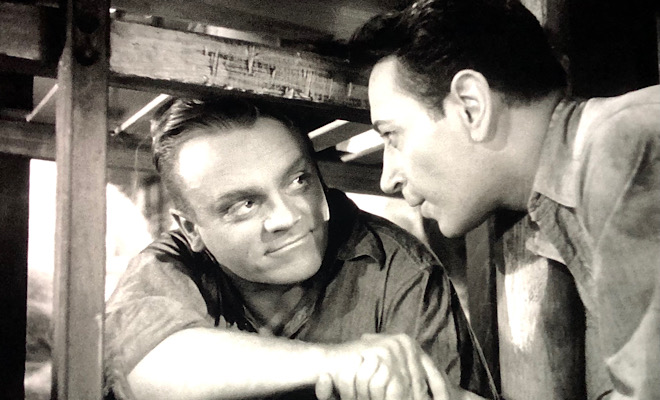 Excellent supporting performances abound as well. Bryan only made 18 pictures during her brief four-year film career (she would retire from the movies in 1940 to marry Justin Dart, a future advisor to President Ronald Reagan), but crafted a bevy of fine portrayals marked by a winning naturalness and sincerity. George Bancroft makes a solid impression as the sympathetic but ineffectual prison warden, and a host of Warner Bros stock actors shine in bit parts that add tremendous atmosphere to this gritty film.

Each Dawn I Die may not enjoy the same name recognition as such stalwart prison dramas as Brute Force, Birdman of Alcatraz, and The Shawshank Redemption, but it deserves to be rediscovered and included in that elite group. The film may be formulaic and a bit cliched, but it snap, crackles, and pops from the first frame to the last and remains another exemplary example of the kind of rough-and-tumble, in-your-face moviemaking that put Warner Bros on the cinematic map. 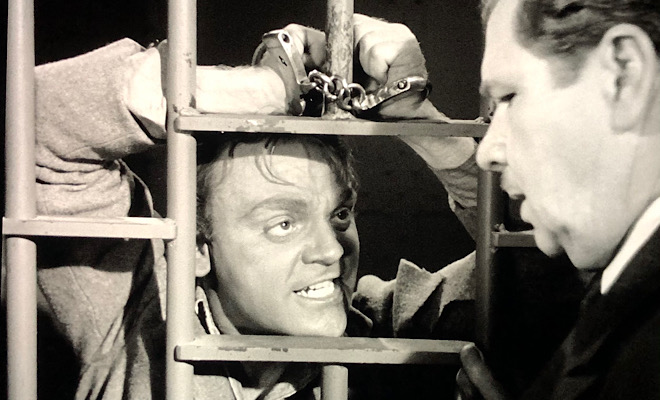 Vital Disc Stats: The Blu-ray
Each Dawn I Die arrives on Blu-ray packaged in a standard case. Video codec is 1080p/AVC MPEG-4 and audio is DTS-HD Master Audio 2.0 mono. Once the disc is inserted into the player, the static menu with music immediately pops up; no previews or promos precede it.

A new HD master sourced from a 4K scan of the best surviving nitrate preservation elements yields a terrific 1080p/AVC MPEG-4 transfer that faithfully honors the stark cinematography of three-time Oscar nominee Arthur Edeson, who also photographed such iconic classics as Casablanca and The Maltese Falcon. A beautiful grain structure preserves the celluloid feel and adds essential texture to the gritty prison settings, while excellent contrast, crystal clarity, and finely graded grays produce an often stunning image that brims with detail and depth. Rich blacks, bright whites, and solid shadow delineation punch up the picture, and such fine elements as the fabric of Raft's tweed jacket, the polka dots on his tie, and the pinstripes on the prison uniforms are vivid and stable. Sharp close-ups nicely show off facial stubble and Cagney's fiery eyes, though the enhanced clarity does call attention to the heavy makeup on some of the thugs. A few scenes sport a bit of softness, but no nicks, marks, or scratches mar the pristine source material. It's impossible to imagine Each Dawn I Die looking any better than it does here, so if you own the previous DVD, you'll definitely want to consider an upgrade.

The DTS-HD Master Audio 2.0 track supplies robust sound that maximizes the impact of all the audio effects. The harsh noise from the twine machinery in the prison factory fills the room with ease and all the gunshots, sirens, and combustions during the prison riot finale are crisp and distinct. Subtleties like ticking clocks and driving rain are well rendered, too, and though some of the effects compete with the dialogue for prominence, the crackling exchanges are generally clear and comprehendible. Music is sparsely employed, but a wide dynamic scale handles all the highs and lows of the melodramatic score (written by Warner workhorse Max Steiner, though he receives no screen credit) without any distortion, and no age-related hiss, pops, or crackle intrude. Sound is a major player in Each Dawn I Die, and this excellent track does it proud.

All the extras from the 2006 DVD have been ported over to this Blu-ray release, and it's quite a bounty of vintage material.

James Cagney and George Raft made only one picture together, but it's a doozy. Each Dawn I Die stands as one of the best prison movies ever to come out of Hollywood's Golden Age, and Warner Archive gives it the red carpet treatment with a terrific remastered transfer from the best surviving nitrate preservation elements, robust audio, and a hefty supplemental package. Spirited performances, a snappy script, and important themes distinguish this exciting, absorbing film that holds up well more than 80 years after its premiere. Highly Recommended.