Olive Films’ reissue of director John Frankenheimer’s lyrical, inspiring biopic chronicling the personal evolution and ornithological contributions of convicted murderer Robert Stroud pales when compared to the previous Twilight Time limited edition release, but it still nicely honors the timeless Birdman of Alcatraz, which features one of Burt Lancaster’s best performances. A darker transfer and weaker commentary drag down the disc’s score, but the deficiencies aren’t substantial enough to alter its status as a Recommended release.

Robert Stroud was certainly no saint. He killed two people, viciously attacked several others, and never expressed any remorse for his unconscionable crimes. He began serving time in 1909 at the tender age of 19, and spent the rest of his life - more than a half century - behind bars. Most shocking of all, he endured 43 years in solitary confinement. Yet somehow Stroud never collapsed under the strain and never lost his will to live, no matter how bleak the circumstances or severe the abuse. On the contrary, the convicted murderer found ways to thrive. He stimulated his substantial yet underdeveloped intellect and funneled his energies into the study of birds, becoming one of the country's foremost ornithological experts and developing cures for rare aviary diseases, all within the confines of a maximum security prison.

As a young man, Stroud was uneducated, belligerent, shamelessly defiant, sullen, and violent, but he evolved over time and transformed himself into a scholar, writing two acclaimed books and earning the admiration of many in the outside world who ceaselessly campaigned for his release. The pleas, however, fell on deaf ears. Ironically, the system that vociferously and continually proclaimed its commitment to rehabilitation resented Stroud's spirit and individualism and vanquished him at every turn. The hypocrisy was stunning, but it inspired Stroud to continually strive to better himself and contribute as much as he could to society from within his cell's cramped confines.

Birdman of Alcatraz tells Stroud's story with insight and sensitivity. Yes, it sugarcoats some facts, omits others, and plays up Stroud's attributes to suit its humanistic agenda, but the screenplay by Guy Trosper, adapted from the book by Thomas E. Gaddis (who's portrayed by Edmond O'Brien in the movie), and a restrained, heartfelt performance by Burt Lancaster in the title role combine to present a balanced portrait of a complex man who learned to conquer his personal demons and forge a purposeful life. What Stroud withstood for all those decades is difficult to comprehend, and director John Frankenheimer doesn't depict the full weight of it, concentrating more fully on Stroud's development, introspection, and his relationships with a neighboring cell mate (Telly Savalas), sympathetic guard (Neville Brand), vindictive warden (Karl Malden), and two influential women - his protective and domineering mother (Thelma Ritter) and a fellow bird enthusiast (Betty Field) who develops a friendship and business partnership with Stroud after reading his ornithological tome.

Though it preaches prison reform and touts the indomitable nature of the human spirit, Birdman of Alcatraz is first and foremost a finely etched character study and searing portrait of an incarcerated man. Like the birds he cultivates, Stroud lives his life in a cage, dependent on nourishment and care from others and allowed only fleeting moments of "freedom." The film's deliberate, some might say slow, pacing serves an essential purpose, providing a taste of the drudgery Stroud faced on a daily basis and the interminable nature of his sentence. In a prison environment, time is slow, and Frankenheimer masterfully details Stroud's fanatical devotion to study, experimentation, and innovative problem solving.

When we first meet him, Stroud is the typical angry young man who refuses to bow to authority and thumbs his nose at the severe punishments doled out to him. His insolent behavior and inability to interact with his fellow inmates soon lands him in solitary, and one rainy evening while taking his exercise in the prison yard, he makes a discovery that will forever alter his life. A wounded sparrow catches his eye, and he impulsively brings it back to his cell, sheltering and nurturing it until it regains its health. The creature fascinates him, and soon Stroud begins collecting and studying birds, turning his cell into a virtual aviary. He builds his own birdcages, begins breeding birds, and when a strange flu threatens to wipe out his flock, he experiments with various chemicals and ultimately concocts a cure.

Interestingly, all of the ornithological episodes in Stroud's life occurred at Leavenworth prison in Kansas, not at Alcatraz. When Stroud was transferred to "The Rock" in the early 1940s, where he stayed for 17 years, he was not allowed to bring his birds along and ceased studying the species. Also, the movie's Alcatraz sequences only comprise a relatively brief portion of its running time, making the title Birdman of Alcatraz somewhat disingenuous. Nevertheless, Frankenheimer - much like Sidney Lumet before him in 12 Angry Men - manages the tight spaces and confined quarters quite well, fashioning stimulating images that keep the viewer involved. A lengthy shot of a baby bird struggling to emerge from an egg and break free from the cocoon that constrains him represents Stroud's bound body and spirit, and stands as one of the movie's most powerful and symbolic scenes. And like the rest of the picture, its understatement is admirable.

Lancaster, at age 49, looks too old to play the young, brash Stroud early on, but grows into the role as the character matures and files one of his finest and most identifiable performances. Thankfully, the famous megawatt Lancaster grin is nowhere to be seen, and the actor nicely suppresses the mannerisms and unabashed bravado that often hamper his other portrayals. Always restrained, often soft-spoken, and exuding a heartfelt sincerity that resonates as Stroud ages, Lancaster is a riveting presence, and his intuitive, subtle work honors his character and carries the film. If Gregory Peck didn't happen to play Atticus Finch in To Kill a Mockingbird the same year, Lancaster probably would have won the Best Actor Oscar for his excellent turn.

Nominations also went to Ritter for her change-of-pace performance as Stroud's steely, manipulative mother and Savalas as the colorful cellmate who shares Stroud's affinity for birds. Those who only know Savalas as his 1970s TV alter ego Kojak will find his work here a revelation, and well deserving of the accolades it received. Malden and Brand also shine, but it's the under-appreciated Betty Field in one of her last film roles who really stands out, crafting a warm, natural, often luminous portrait of a lonely woman who can never have the man she loves.

Though it drags in spots, Birdman of Alcatraz remains a deeply affecting, fascinating, and well-produced message film that champions the strength of the human spirit and its limitless capacity for change. Discovering one's individuality and humanity in a collective, inhuman atmosphere is an almost impossible task, yet Stroud, through sheer strength of will, managed to accomplish that feat and ended up achieving far more behind bars than many of us do out in the open. The prison system may be loath to admit it, but he's the poster child for rehabilitation, and this excellent film provides some small hope that others, if treated with dignity and compassion, can also change and thrive. 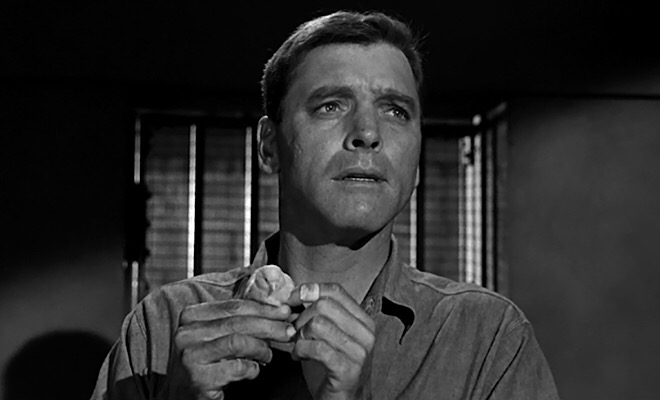 The Olive Films edition of Birdman of Alcatraz arrives on Blu-ray packaged in a standard case. Video codec is 1080p/AVC MPEG-4 and audio is DTS-HD Master Audio 1.0. Once the disc is inserted into the player, the static menu without music immediately pops up; no previews or promos precede it.

The source material for this Olive release seems to be the same one Twilight Time used for its limited edition Blu-ray, but the overall presentation is a bit different. Olive’s 1080p/AVC MPEG-4 transfer looks noticeably darker than the Twilight Time rendition, diffusing the sharpness of fine details and making the image far more susceptible to crush. The wildly fluctuating bitrate also affects the picture’s consistency, and though occasional speckles dot the print, it remains largely clean and sports a pleasing grain structure that adds essential grit to Stroud's environment. Close-ups are sharp and revealing, especially a couple of extreme shots in which pores, facial marks, and individual eyebrow hairs are strikingly visible, and Thelma Ritter's age makeup appears fairly natural. No noise creeps into the image even during dark sequences, and no artificial enhancements seem to have been applied. This Olive transfer may not be as balanced, vibrant, and detailed as the one produced by Twilight Time, but it’s still a big step up from DVD and provides a pleasant enough viewing experience.

The DTS-HD Master Audio 1.0 track is the same one that appears on the Twilight Time disc, and it supplies clear, well-modulated sound with no distortion or age-related surface noise, pops, or crackles. Subtleties, such as the delicate chirping of birds and shuffling of feet, are nicely rendered, while sonic accents like gunfire, thunder, and the slamming of cell doors provide some welcome weight to the track. Elmer Bernstein's robust score fills the room with ease, and all the soft-spoken dialogue is easy to comprehend. Birdman of Alcatraz is a quiet film, but the silences are clean and there's an elegant resonance to this understated track that's quite effective.

This Olive edition contains a new audio commentary, recycles the film’s trailer from the Twilight Time disc, and drops the isolated score track.

Audio Commentary - Lancaster biographer Kate Buford sits down for a low-key commentary that can’t quite sustain itself over the course of the film’s lengthy running time. Though Buford tries her best, commentaries for two-hour-plus movies tend to fare better when two or more participants cultivate a spirited dialogue, as they did on the Twilight Time disc. Buford serves up plenty of background information on both Lancaster and Stroud, discusses the history of Stroud’s case, and states Birdman of Alcatraz possesses the power of a silent movie. She also reveals Lancaster hoped the film would lead to Stroud’s release from prison, notes the actor capped his teeth to facilitate a dazzling smile that he used to terrific advantage throughout his career, and tells us Telly Savalas is Jennifer Aniston’s godfather. About halfway through the track an audio change occurs that makes Buford sound as if she’s delivering her remarks from the bottom of a well, but thankfully the episode only lasts 10 minutes or so. Gaps also plague the presentation, so unless you’re a diehard fan of the film, you might want to skip this competent but dreary commentary.

Many films focus on prison reform, but Birdman of Alcatraz tackles the time-honored issue with both understated eloquence and a fierce commitment. Burt Lancaster files one of his finest portrayals as Robert Stroud, a convicted murderer who rises above deplorable conditions and myriad injustices as he struggles to improve his intellect, influence society, and forge a worthwhile life behind bars. Olive’s Blu-ray reissue of the film features a darker, less pleasing transfer and weaker commentary track than the previous Twilight Time edition, but it’s still a respectable release. If you can scrounge up a copy of the Twilight Time edition, that’s the preferred choice, but if not, the Olive release is an acceptable substitute that still honors John Frankenheimer’s excellent film. Recommended.

Sale Price 19.99
List Price 29.95
Buy Now
3rd Party 19.09
In Stock.
See what people are saying about this story or others
See Comments in Forum
Previous Next
Pre-Orders
Tomorrow's latest releases