EuroSleaze master Joe D’Amato dives into the depths of shark-fueled terror with the bizarrely tepid and nonsensical Deep Blood. If you’re not horrified by stock footage, oddball dialogue, the rubber shark in the bathtub will get you! Severin Films brings us this Italian Sharksploitation masterpiece to Blu-ray with an excellent A/V presentation. Sadly there aren't really any bonus features to expand the greatness of this release - but if you’re a shark flick fan don’t let this one swim away. Recommended

Four friends, Miki, John, Jason, and Alan are playing on the beach cooking hotdogs when they are greeted by a mysterious Native American who hands them a totem and warns them of the aquatic demon Wakan! Swearing a blood pact, the boys agree they’ll help one another should the evil arise. 10 years later, a monstrous killer shark is stalking their island home. When John is killed, the three young men band together against the wishes of the Mayor and Chief of police to kill the creature and end the evil of Wakan once and for all. 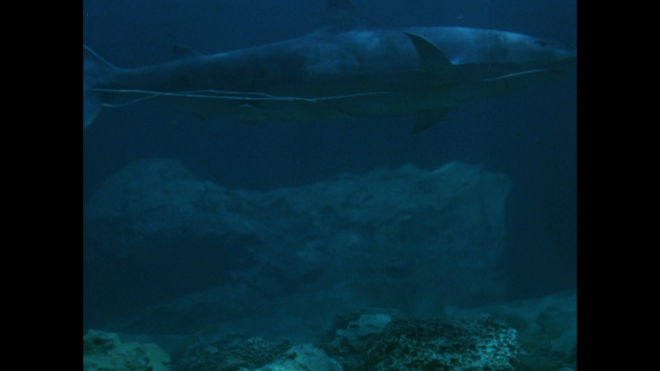 Italian Sharksploitation movies are a weird sub-genre of the already strained shark-horror genre kicked to life by Jaws and its sequels. Some are out to just recreate the recipe that was already successful on the cheap and easy. Other’s genuinely tried to be something more than the sum of their parts like Tintorera. Others are like Cruel Jaws are churn and burn ripoffs - right down to nicking footage from each other’s films. Enzo Castellari’s The Last Shark is the pinnacle of Italian Sharksploitation movies to the point that several films including Deep Blood stole footage from it.

Shot on location in Florida and Mississippi… and some pools and bathtubs in Rome, Deep Blood is a bizarre amalgam of genres ranging from creature feature horror to mystical creature horror to 80s teen dramas. Tag in a budget that’s little better than a well-funded afterschool special with a talent pool worthy of a day-time soap opera, and you have yourself one hell of a weird movie. Adding to the weirdness of the project, credited director Raffaele Donato actually only worked on the film hardly a day before calling it quits leaving producer Joe D’Amato to complete the film on his own.

While the cast is mostly made up of Americans with English their primary language, the script from George Nelson Ott (and apparently heavily rewritten by D’Amato) sounds like it was written by someone who didn’t really understand what the words meant. They’re in the ballpark, you can parse out the intention, but some exchanges are downright daffy. Why does the Sheriff tell a random story about Vietnam to the boys as his mea culpa about the shark? Why does a character say he knows the legend of the Wakan and explain the entire thing - and then immediately say “I still don’t understand any of it.” Sounds like he had a pretty damn good understanding of the legend! Again, it’s just daffy dialog and the film is populated with numerous dumbfounding examples.

Suffice to say Deep Blood probably isn’t a safe drinking game movie. If you took a shot every time you said “what?” it what you just saw or heard you’d be under the table before the first shark attack. And what an attack it is! All credit due for an inventive attempt to build suspense, but those kicking legs and the cutting back to the kid on the beach… I’ll just close out my review with that. If this scene doesn’t inspire you to check this one out - I don’t think anything else in this movie will.

Vital Disc Stats: The Blu-ray
Deep Blood makes landfall on Blu-ray thanks to Severin Films in a single-disc release. Pressed on a Region Free BD-25 disc, the disc is housed in a standard sturdy black case. The disc loads to an animated main menu with traditional navigation options. 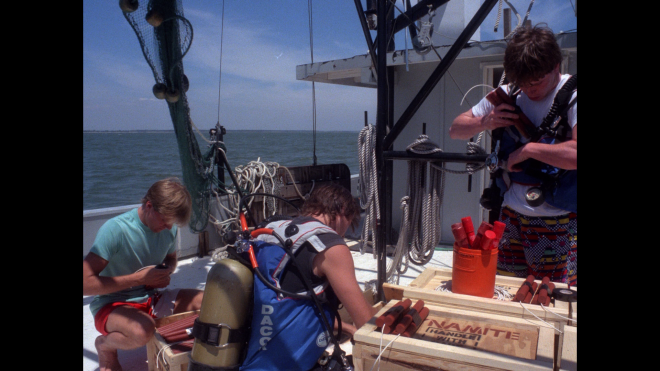 The first time I saw Deep Blood it was a pretty janky DVD. It looked like it was run off a VHS tape with audio that had segments of the movie in Italian making it damn near unwatchable. So on that basis alone, this release from Severin is a monumental improvement!

Presented in 1.33:1, this 1080p transfer sourced from a new 2K scan of the negative sparkles of a quality restoration effort. There are some moments of speckling here and there, but nothing serious to get worked up over. Details are sharp without signs of edge enhancement. Colors are bold and vivid with excellent primary saturation and healthy skin tones. Film grain is intact with a healthy natural appearance. Black levels are strong giving the image a welcome sense of depth. The roughest areas are the stock footage sequences and some of the cheap underwater sequences, but that’s the worst of it. 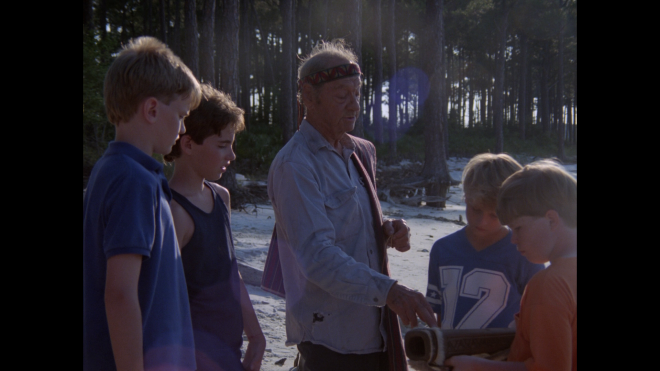 This one comes with your choice of either an English or Italian DTS-HD MA 2.0 audio mix. Both are fine, but the English is the native track to the film and most of the actors so you wouldn’t have to deal with the rubber mouth issues. The Italian is fine but the English is the more robust of the two. Dialogue is clean and clear throughout without any issues. Some voice work has a canned dubbed quality, but that’s to be expected. Sound effects are solid, but there’s not a lot of imaging to spread things around. It’s very front-loaded. The music is well placed, even if some of it is the most languid serene material for a third-act climax setup. Seriously, a lot of the score is probably better suited for a yoga studio Shavasana than a shark movie. No dropouts, cuts, distortion, or age-related issues to speak of. 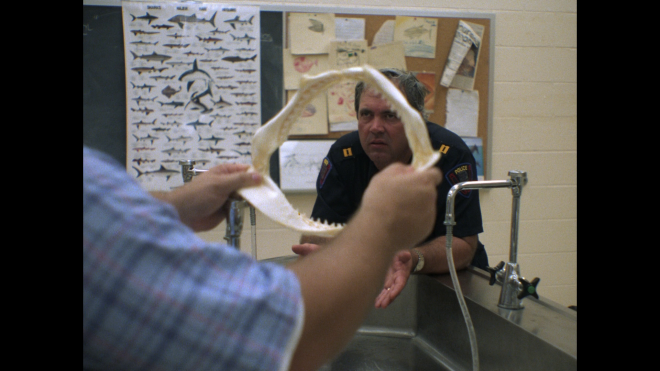 Sadly there aren’t any bonus features to speak of other than the film’s trailer. I would have loved an audio commentary or if the cast could be located for an interview - but at the end of the day it’s a treat to have this movie on Blu-ray. 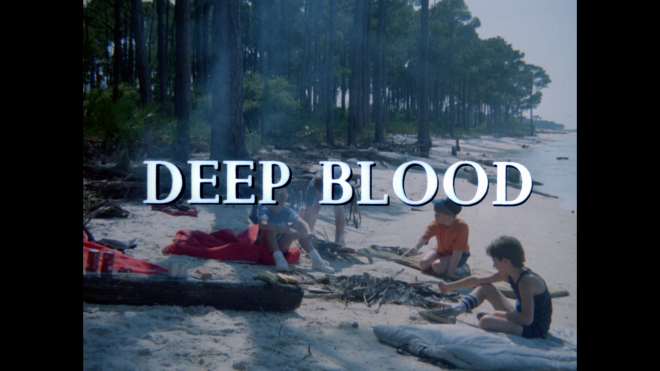 In the gallery of Sharksploitation movies, Deep Blood is certainly an oddity. It’s a bizarre blend of genres from shark and mystic creature feature horror to 80s teen drama. The performances are touchy, the dialogue bizarre, the editing strange, and the music even stranger. It’s a hell of a film and if you’re a fan of this sub-genre, it’s an entertaining treat! With a solid A/V presentation, the only downside of this release is the lack of bonus features - but the flick is entertaining on its own so give it a whirl. Recommended.