Just when a regatta is set to bring in a swath of tourists and a dirty-dealing mafia real estate developer is about to close his big deal, a small island community will have to swim for their lives in Cruel Jaws. That's right - it's not Jaws - it's Cruel Jaws. Italian cinematic kleptomaniac Bruno Mattei strikes again this time liberally lifting characters, dialog, and even footage from one particular famous shark franchise. Severin offers both the original and Japanese cuts of the film, with solid a video transfer, decent audio, and some excellent bonus features. No sharksploitation movie collection is complete without Cruel Jaws on the shelf. Recommended.

Pablo Picasso once said, "good artists borrow, great artists steal." By that standard, Italian schlock-master Bruno Mattei is one of the greatest artists of cinema. Mattei has a long history of stretching international intellectual rights for his own use but it's his 1995 symphony of sharksploitation madness Cruel Jaws that defines his career. Liberally, perhaps even negligently stealing from a variety of shark films, Mattei - working as William Snyder - yanks characters, dialog, plot points, and even footage from films like The Last Shark, Deep Blood, and of course virtually every entry in the Jaws franchise with reckless abandon. But his brand of cinematic thievery didn't stop with shark movies - there's even a pointless autopsy sequence that rips off The Silence of the Lambs as our characters liberally dab vapor rub under their noses before taking a look at a gnarly corps of a diver - that we literally already just saw mere seconds earlier.

Normally in one of my reviews I would have already offered up some kind of recap of the film's plot. There's no need for that here because Cruel Jaws is essentially the entire Jaws franchise regurgitated back onto film with some chewed up bits and chunks of other movies. While this would sink some movies, it's how Mattei pulls everything together that makes it so incredibly shark-guano bonkers and enjoyable. When you have a guy that looks like Hulk Hogan taking on a shark that looks more like a kid's under-inflated pool toy, you're in for the evening. Take the phone off the hook, you're not to be disturbed while this film is playing!

In some foreign markets, this film was even openly marketed as Jaws 5 making it a bit of a hell and gone legal nightmare. By the time I heard of this film you couldn't find a legit copy to rent or buy. You had to turn to the bootleg market. At the same time, I was finally getting to see The Evil Dead, I found this film. Thanks to a friendly vendor at a local comic convention armed with his tiny 13" television with built-in VHS player, he sold me a backpack full of bootlegs - and Cruel Jaws was in the pile. He only had to show me the helicopter scene to sell me a tape. It's fitting that in order to watch a movie that illegally used footage of other movies I had to buy an illegal copy of this flick.

After another boutique studio aborted their attempt to release this on Blu-ray a few years ago, Severin steps up to the plate and cracks a home run. Not only do we get the original cut of the film, but we also have the slightly longer and a little more gory Japanese cut all in one place. The gore is actually pretty minimal, most of the best gore was stolen from other movies. When Mattei had to do it himself, the bloodletting is comical as it looks more like someone swimming in a bucket of overturned bright pink Pepto Bismol than blood. The acting is well…not something that should really be critiqued but props to the cast for going full out with this gonzo shark feature. To their credit, everyone plays it straight as they can uttering a variety of ridiculous lines without breaking. It's a testament to Mattei's brand of cinematic high-art that allowed him to be so competently lazy and still succeed at entertaining an audience. 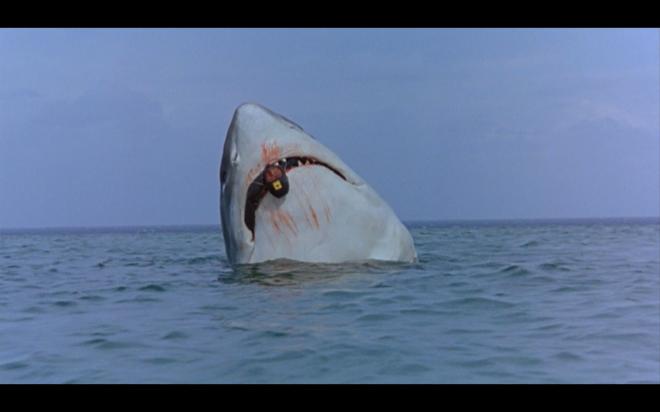 Cruel Jaws attacks Blu-ray in a Single-Disc release from Severin. Pressed on a Region A locked BD-50 disc, the disc is housed in a black elite case and loads to an options menu letting you choose between the Mattei Cut that runs 1:34:21 or the Snyder Cut that runs 1:36:15. Whichever version you choose has its own dedicated submenu giving you access to the same set of bonus features.

Cruel Jaws arrives with two viewing options sourced from different elements. The original "Mattei Cut" is the cleanest and best sourced from a new remaster and offers a generally pleasing 1080p presentation for fans to devour. Free of any serious issues and artifacts, the only real trouble spots come in the "stolen" footage from other shark movies that have the look and appearance of a second-generation VHS recording with little clarity. Still - if you know your shark movies it's relatively easy to figure out which movie the scenes were lifted from. Colors for the most part are bold with wonderful mid-90s color pop. Details are relatively strong and there's a natural element of film grain to enjoy.

The "Snyder Cut" (nothing to do with Justice League The Snyder Cut) is the Japanese version that runs about a minute longer and is sourced from a rougher print of the film without any restoration. Speckling, scratches, staining are all apparent throughout. Colors aren't as sharp or accurate, details are a bit crunchier, and black levels suffer some notable crush with compression artifacts. It's not unwatchable, but it's not as clean as the Mattei Cut.
The Mattei Cut - 4/5
The Snyder Cut - 3/5

Cruel Jaws rages on with a solid DTS-HD MA 2.0 mono track that largely gets the job done. The sound design is pretty rough without a consistent sense of atmosphere where various indoor and outdoor locations dictate the overall quality. There are a few pop songs speckled throughout that have been re-edited without the lyrics but you can easily recognize the tunes but they sound choppy lending an extra level of bizarre to an already weird movie. Overall the audio is fine - the bigger issue is dialog can be a bit inconsistent and require some volume riding. Sections just sound like single-take recordings without any dubbing or ADR work to clean it up.

Considering the legality of this film, having Cruel Jaws on disc at all is practically its own bonus feature, but here we also get the Japanese cut dubbed "The Snyder Cut" which is a little bit longer. From there we have a great retrospective of the Sharksploitation genre with Rebekah McKendry which is very insightful. After that, we have a nice interview with Jay Colligan via Skype due to Covid restrictions, but he offers up great memories of the making of this movie. It may not be a huge collection of bonus features, but then I'm not complaining now that I can slip this movie into my dedicated shark flick collection.

Cruel Jaws is a crowd-pleaser through and through. A ripoff of other better films in the ever-growing shark genre it's an event to behold. It's not a movie you simply see, it's a movie you need to fully experience with as many people as possible. You could have a great time on your own, no doubt there, but if you had a gang of friends this is the perfect party movie. Sharknado wishes it were as much fun as Cruel Jaws.

Severin Films brings sharksploitation fans a jewel of the genre with Cruel Jaws on Blu-ray. The disc offers both cuts of the film with an excellent video transfer, a decent audio mix, and a couple of worth while bonus features. This is the kind of great movie that you laugh with as much as you're laughing at it. Check it out - Recommended.