The greatest mediocre trilogy of sequels - Jaws 3 Movie Collection gathers together the previously available Blu-rays of Jaws 2, Jaws 3, and the amazing can of aquatic cheese Jaws the Revenge. After the first film, the franchise became a steep sliding scale in quality, but these movies have their fans. As terrible as the films become they're still pretty damn entertaining. Since these are the same discs from 2016, the only thing new Universal Studios Home Entertainment is adding to the package is convenience, a low price point, and a digital code. If you haven't picked these up already, this is an easy and cheap way to do it. Recommended - for die-hard shark fans. 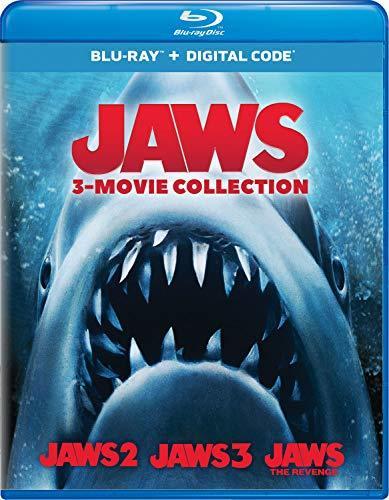 As we've already covered the first two sequels at length with the previous Blu-ray releases, I won't be spending much time going over that material again when I pretty well agree with our original reviews. The Jaws franchise is one I love - warts and all. A sliding scale in quality, by the time Jaws the Revenge hit theaters it was a shadow of its former self edging into high camp. But in their own ways - even when they're at their worst, these three sequels offer up some measure of entertainment value.

Steven Spielberg's Jaws is an iconic film. There's no getting around that. It changed the movie-making industry forever and has held up as a benchmark man vs. nature horror film. Its sequels… well, not so much. While starting out with good intentions, Jaws 2 does little more than rehash what we've already seen albeit pretty well. It may not be as fresh or surprising but it has some genuinely good moments working for it and Roy Scheider fully commits giving the film so measure of urgency when we all know where it's going to go. Even if predictable it's a fun show and worth enjoying.

Jaws 3 is essentially a remake of 1955's Revenge of the Creature taking our big bad mega momma shark to Sea World and letting it terrorize an underwater theme park attraction. Loosely connected to the first two films, the main event for this film was the 80s 3-D resurgence offering some goofy pop-out effects and not much else of substance. The shark already looked pretty fake to begin with but this takes it to a new level.

Jaws the Revenge… at least the cast enjoyed a nice trip to the Bahamas! Infamous for keeping Michael Caine away from accepting his first Oscar award, the film is pure camp with Lorraine Gary enjoying a psychic link with the shark that killed her youngest son and has stalked her down to the Caribbean to finish off the rest of the family. The definition of "so bad it's good."

"Jaws 2 improves by the second half, with a more hurried pace as a group of rambunctious teens decides to spend the day sailing with the relentless shark trailing behind them. The group includes Brody's sons, Michael (Mark Gruner), and Sean (Marc Gilpin), which ups the ante and our reluctant hero's understandable need to bring an end to the water games. Granted, the last hour of the movie is inherently a retread of the same cat and mouse chase with Brody, Hooper, and the sorely missing Quint aboard the Orca. But it's the film's highlight, and finally introduces a much-needed dose of suspense, however mild it may be. It also gives viewers a better glimpse at a mechanical shark that's more realistic than its predecessor, sporting a gnarly burn scar from a previous encounter with a terrified boater. Fans of the franchise and those who grew up watching the sequel on VHS likely remember this portion of the movie and the shark's final demise, which again is reminiscent of Brody facing off with a deadly killer. In the end, the movie doesn't rise to the thrill levels as its predecessor, but it gladly rides on the waves of its success." 3/5

"Rather than risking the franchise with an entirely fresh and original idea, the filmmakers simply chuck the same old chum at audiences. It's not an exact copy, but Jaws 3 essentially follows a similar blueprint as the two previous films. Notwithstanding, I admit being slightly amused learning how Mike and Sean have grown into adulthood after two encounters with a great white, but the plot frankly treads on shallows waters, failing to recapture much of the charm, thrills, and suspense of its predecessors. Instead, the movie arrives on shore with an unintentional air of comedic badness, starting with the inadvertently funny explanation of how the wide-mouthed monster accidentally swims into the artificial lagoon. The shark that was, at first, believed to be the ferocious killer is actually the baby, and the big, angry momma followed behind it! Alternatively known as Jaws 3-D, the producers capitalized on the suddenly revived but very brief interest in 3D movies at the time. And thanks to some decently strong camerawork by director Joe Alves, the added third dimension is the movie's saving grace and is ultimately the best way to watch it." 2.5/5

When the best thing about your movie is the frustratingly repetitive NES video game that it spawned… you've got a problem. Joseph Sargent should have been the perfect man to direct this film. Director of arguably one of the best thrillers ever made - The Taking of Pelham One, Two Three - Sargent knows his craft and how to manage suspense and action. And in a lot of ways, you can see that skill here - but the script is woefully stupid. The opening of the film with the death of Sean Brody while children sing Christmas carols in the distance is chilling and the best part of the film. The rest of the movie is a deep dive into hilarious. When the giant 30-foot shark starts chasing Lance Guest through a sunken ship with ease it becomes an unintentional laugh-a-minute. It's absolutely hilarious and can't be taken seriously - there's good reason previous filmmakers didn't show the shark for very long. 2/5

Jaws: 3-Movie Collection from Universal Studios Home Entertainment gathers up the three previously released Blu-ray discs and slips them into one convenient 3-disc set. Housed in a standard 3-disc case, each disc is identical to the ones already available on the market. Nothing has changed in that regard - no new transfers or extra features included. The one new addition to the set is a Digital Copy code that is Movies Anywhere compatible. The picture, audio, and bonus feature portions of this review will be excerpts from our original reviews accept for Jaws the Revenge which we had not previously covered. 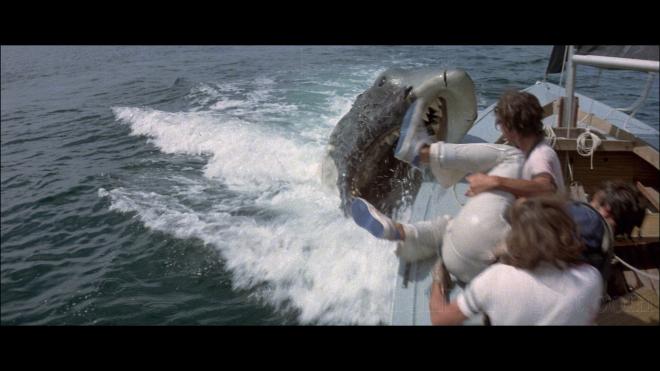 "The great white puts a damper on summer break with an attractive 1080p/AVC MPEG-4 encode (2.35:1), showing strong definition and clarity throughout. Of course, a good chunk of the picture falls a bit on the softer side, much of it related to the original cinematography, but overall, the elements have aged very well."

"The second sequel in the series jumps the shark, so to speak, with a good-looking AVC MPEG-4 encode and a bit more satisfying MVC-encoded counterpart. Admittedly, the source hasn't aged particularly well, falling on the softer side of things for a good chunk of the runtime. But much of this can be chalked up to the photography at the time and the special cameras that were used during the production.

The transition to 3D Blu-ray is fantastic with several awesome immersive moments throughout. Parallax, at first, feels a bit exaggerated and may require a bit of getting use to at first, but separation between various items is flawless, creating the sort of layered effect that also feels natural. With lots of depth and dimensionality, objects in the far distance penetrate deep into the screen, making large open spaces, especially when walking about the park, feel incredibly spacious and expansive."

As with so many of Universal's back catalog "upgrades" to Blu-ray - Jaws the Revenge wasn't given much in the way of TLC. In fact, this is essentially an upconvert of the same master used for the previous DVD releases which in of itself wasn't much to look at. On the surface, there are moments where it looks pretty good. Details are apparent and give nice textures to facial features, clothing, and the rubbery fake shark. Film grain is apparent but it's pretty spotty with some instances of smoothing, as well as edge enhancement causing banding and halos throughout. Colors offer some primary pop - reds and blues look pretty good but skin tones are a bit flat and black levels borderline crush without much image depth. Certainly better than the old DVDs but it's hardly a fresh mint transfer. 3/5 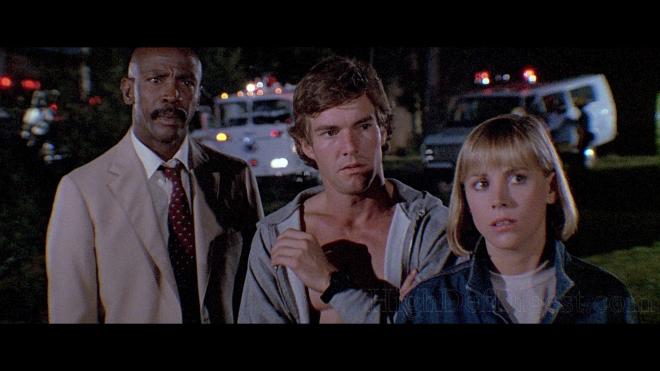 "Just when fans thought it was safe to revisit one of the most successful sequels of all time, Universal equips the movie with a very good and for the most part satisfying DTS-HD MA mono soundtrack. Granted, a good portion of the track comes in pretty flat without much or little extension into the upper ranges, and there is noticeable loud hissing during several moments. The few action set pieces lack a bit of room-penetrating energy and clean distinction, but the design overall is decently dynamic with much to appreciate nonetheless. And dialogue reproduction is strong and intelligible throughout."

"The horror thriller is also nicely equipped with a very satisfying DTS-HD Master Audio stereo soundtrack. While not as wholly immersive as the 3D video, the lossless mix nonetheless gets the job done with various thrills and chills. Much of the activity takes place in the center of the screen, but the design still delivers a wide and spacious soundstage that's quite engaging."

Impressively enough Jaws the Revenge offers up a respectable DTS-HD MA 5.1 audio mix. While not the most dynamic thing ever made, it's a decent track. With the scenic location and so much of the film out on the water, it offers a wide-open soundscape. The heartbeat tracker effect pulses nicely through the channels to punch up the suspense even if it's a very silly gimmick and triggers bad memories of the NES game. Dialog is clean and clear throughout without issue and there's enough surround presence to notice while the front/center channels do handle most of the workload. 3.5/5 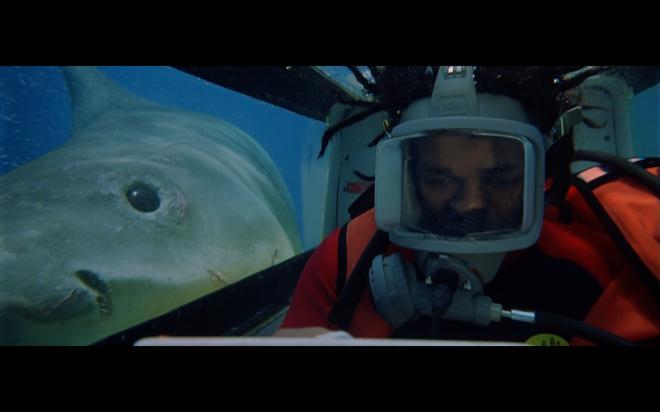 Since these discs have been recycled from the previously available Blu-rays, nothing has changed in the four years since their original release. 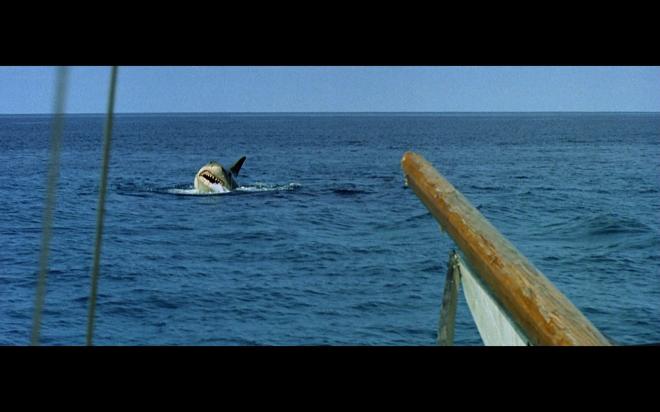 Your mileage with Jaws: 3-Movie Collection will depend entirely on how much you love these sequels - and whether or not you already own them. The quality of the films themselves is a pretty steep sliding scale with Jaws 2 being a serviceable sequel - especially in the last half. Jaws 3 only works in 3-D and even then it's a tall order as the ridiculous plot tends to get ahead of itself. Then there's Jaws the Revenge which sank the franchise for good reason but if you've got raucous friends looking for a good laugh - there's ample material to snicker at. The A/V presentations for the first two films are generally pretty great but the only thing Jaws the Revenge has working for it is a somewhat immersive surround mix. Bonus features haven't changed but the big draw is Jaws 3 in full 3-D with some pretty impressive results. This set may not be for everyone, but if you only get mild enjoyment out of these sequels, this is a cheap and easy way to add them to the collection without hurting yourself. Recommended for fans of iffy sequels.