Jaws chomped movie theaters shocking audiences to box office glory. In its wake, a staggering number of imitators looking to hype audiences with toothy terrors bit the market. Some worked, most were pretty terrible. Tintorera… Tiger Shark is one such mind-numbingly bizarre imitation that often forgets it’s a shark movie and instead becomes a jaunty swingers film. Tintorera earns a worthy Blu-ray upgrade from Kino Lorber and Scorpion Releasing with a decent but unremarkable A/V presentation and a great audio commentary. If you’re a fan of shark schlock - check it out. Worth A Look

The Mexican coast is lined with the most desirable beaches and open waters for tourists. Steven (Hugo Stiglitz) has chartered a boat for some R&R in the sun, on the water, and with the ladies. But his plans for the numerous beautiful women are interrupted by local Lothario Miguel (Andres Garcia). The two rivals soon become partners when both men manage to seduce the beautiful British traveler Gabriella (Susan George). But the fun times are in bloody danger as a giant man-eating tiger shark lurks in the beautiful waters waiting for the first chance to ruin a sexy bather’s vacation. 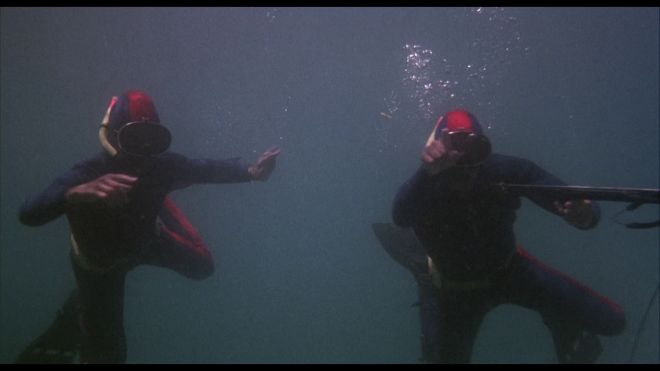 If you’re new to Tintorera - there will be many times where you’ll say to yourself “what the hell is this movie?” I’ve been through this movie a couple of times now over the years and I still ask myself that question. Imagine a straight-forward shark attack movie where the killer fish invades an area, eats some folks, and must be hunted down in a thrilling bloody climax. Now imagine a swinger movie where two men are involved in a polyamorous relationship with the same woman and the dynamics are threatened when one man genuinely falls in love with the woman. Now combine those two very different movies and you have a rough idea of what Tintorera has in store for you. Basically, it’s Summer Lovers only with two dudes instead of two ladies stitched together with a loose Jaws knockoff.

While little to anything about this movie actually makes sense, it’s still oddly entertaining. Co-writer and Director Rene Cardona Jr. is all over the place with this film. Any sense of editing and dramatic thrust is traded for another jaunt to the beach for Steven and Miguel to pick up another pair of ladies to the point that the second act of the film has virtually nothing to do with our titular killer shark. This is the 87-minute version of the film, and I understand there is a longer 126-minute version with an alternate ending, but I’ve never come across that version. This movie in its condensed state already feels bloated so I can only imagine what the longer cut has to offer.

Often Tintorera feels like a film that forgets what it is. Distracted by the romance (and bromance) aspects of the story, it instead becomes a diving film with our attractive cast jumping into the water and not be eaten. In fact, most of the film is these guys spear-gunning some helpless reef sharks. If watching animals die needlessly isn’t your thing, Tintorera will be a bit of a stress test. It’s not as bad as something like the poor turtle in Cannibal Holocaust, but it’s still unpleasant and makes up long portions of the numerous boring parts of the film.

When the shark does attack it’s comically complete with fake blood, body parts, and a shark that’s hardly the gigantic monster the dubbed dialog claims it is. Compared to the cast, the shark is hardly 5-feet long, but that didn’t stop the filmmakers from stuffing a fake head and torso in its mouth to look like it swallowed someone whole! Through movie magic and an Ed Wood level of suspension of disbelief, the scene works and brings you right back into the fun this movie has to offer. When the B-movie bloodletting of the shark finally attacking people hits, the payoff is well worth the wait. Fake limbs and fleshy body parts are strewn about as a clearly fake and/or dead shark is literally towed through the screen (you can see the wire).

The second act shark attack is a highlight of low-budget excellence with a gaggle of partiers being slaughtered by this supposedly massive beast in waist-deep water. That says nothing of the shark’s “breathing” effect to add suspense. This sound should have been a creepy audio cue akin to Jaws’ “heartbeat” theme by John Williams but ends up sounding more like Tony Soprano doing a Jason Vorhees impression. Then we come to our climax which is actually a pretty exciting and well-executed sequence that deftly builds suspense as a final man versus nature fight to the death. If only the rest of the movie could have been as tightly knit and paced as the end we'd have a pretty damn good flick.

I love shark movies. Growing up on the bad Jaws sequels I developed a taste for these flicks and I enjoy checking out new additions to the genre or discovering old classics. The first time I tried to watch Tintorera it was an old VHS tape that split in my player before any shark action hit the screen. Several years ago I stumbled across this movie on YouTube and happily watched it several times during a series of stressful cross-country flights to help care for an ill relative. This movie and a complimentary Jack & Coke made those red-eye flights somewhat bearable. Now on Blu-ray, fans can fully enjoy this oddball shark show - at least the trimmed-down U.S. cut. I wish we had both versions of the movie on this disc to fully compare but even trimmed down, this is still an entertaining show. In the massive stack of shark flicks, Tintorera is no Jaws The Revenge, but then few films are ever that great. If you love bad movies - especially terrible shark movies - you should get a kick out of Tintorera. It’s a 2.5/5 movie with 5/5 entertainment value.

Vital Disc Stats: The Blu-ray
Tintorera takes a bite out of Blu-ray thanks to Kino Lorber and Scorpion Releasing. Pressed on a Region A BD-50 disc, the disc is housed in a standard sturdy case with an o-card slipcover and reversible insert artwork. The disc loads to an animated main menu with traditional navigation options.

Tintorera arrives with a decent if overall unimpressive 1.85:1 1080p transfer. The image looks like it’s a few grades above DVD with some decent image clarity and some fine details peppered throughout, but it’s also a dodgy presentation in many regards. Film grain has a clumpy blocky texture much of the time. Full sun beach sequences look great with a nicely organic film-like appearance but a lot of it is on the rough side of the tracks. Darker shadows and night scenes are where things get choppy. Grain can be blockly giving fine textures a rougher look, and black levels can fluctuate with some nice deep inky blacks or flat crushed out. Underwater photography is generally very pleasing, but again some conditional anomalies with lighting and image depth crop up. There are a few damaged bits with some notable scratches and speckling - especially scenes spliced with stock footage. Without a major restoration effort, this one isn't likely to look any better any time soon.

Tintorera arrives with a decent enough English dubbed DTS-HD MA 2.0 mono mix. Given the dubbing, the voice acting can be a bit all over the map leading to some inconsistencies. Dialog often has a flat lifeless quality where voices sound like they’re hovering outside of the soundscape. Party sequences are equally iffy with voices, music, and sound effects having an inorganic quality as if the entire scene didn’t have any recorded sync sound to build from. The “breathing” hunting sound of the shark is nicely unsettling pushing the frontend of the soundscape. The mix is free of any serious hiss and no pops or skips present. Overall this mix works, it’s just not a very dynamic or impactful presentation.

Bonus features are on the slim side here - unsurprising. I would have loved to see the full uncut version of the film, but sadly that’s just not available in this region for some reason. What we get is a great commentary featuring Troy Howarth and Rod Barnett. This a very informative commentary track as the duo throws out production trivia and analysis with vigor and well worth the listen. After that, we get a collection of trailers.

No, Tintorera is not a great movie, nor is it a particularly great shark attack movie. Arriving in the wake of Jaws’ box office dominance, this film ably works in some human character drama and some progressive relationship dynamics, but it often forgets what it’s doing. This shorter version plays up the sexy swinging trio aspect while also working in some worthwhile shark material to give audiences the toothy bloody action they paid to see.

Kino Lorber and Scorpion Releasing team up to deliver a respectable Blu-ray release of Tintorera. This 87-minute English-dubbed cut of the film is given a decent A/V presentation, it looks like it could use some fresh restoration efforts, but it gets the job done. Bonus features are slim but the audio commentary is a great listen and worth it. If you’re a shark movie fan, this one is certainly an oddity well worth giving a gander. It’s not always focused on shark carnage but when the chomping starts it delivers. Certainly not for everyone, it’s Worth A Look for the curious.