They say war is hell - but so is independent filmmaking. With Clapboard Jungle filmmaker Justin McConnell chronicles his arduous journey to get a film not only fully funded, but shot, sold, and screened in front of an audience. This is essential viewing for any aspiring filmmaker and future film student. Arrow Video delivers an impressive release giving the film a fine A/V presentation but also packing it with several hours of excellent bonus features. Highly Recommended

If every film starts with a dream, that means there’s a dreamer behind every film. Some dreamers are just that, they dream and dream but never make anything a reality. Then there are the genuine filmmakers who pour their blood, sweat, and tears into their dreams scraping together the meagerest of budgets to get their project off the ground in the hopes of making a name for themselves in the industry.

It’s here where we meet Justin McConnell in Clapboard Jungle. An aspiring filmmaker who gets by promoting films at festivals and shooting projects on the side always living on the perimeter of the industry he loves. But Justin has a dream of shooting a well-budgeted feature and making it as a filmmaker. Partnering with a writer he works his fingers to the bone developing a large slate of projects, taking them to festivals and industry events to get his hopes up only to have them dashed against the rocks time and again. Just when the light at the end of the tunnel is in sight, the tunnel suddenly gets a lot longer, and that light a mere pinprick. But there's always hope that the next meeting will change his fortunes. 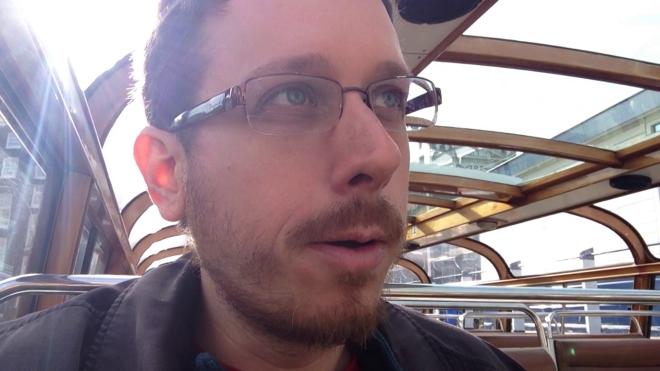 Independent filmmaking is a hustle. You have to endure a lot of pain and depressing hardship for just a few glimmers of joy. Clapboard Jungle is an honest and unflinching look at one filmmaker’s quest to get just one of his films actually made. This isn’t a story that lasts a few months or a year - but five! To hold that long and go the distance you must have the strength and endurance the likes few people could manage. And the end in this case isn’t even the film Justin started out to make - it was but one of many films he presented, got close to funding, watch it fall apart, and then miraculously come back together. That film was the independent horror gem Lifechanger.

I got to review Lifechanger in 2019 for High-Def and was pleasantly surprised by it. I watched it again not that long ago and it holds up nicely as a smartly constructed body horror feature. That release already came with an impressive feature-length making-of documentary and Clapboard Jungle feels like the exhaustive companion piece. While it may seem masochistic to film yourself virtually every day while you try to develop a film - let alone for several years - Justin’s frank and personal journey takes the making of a small horror film and turns it into a landmark tome.

I graduated from film school in 2007 when Chicago was a hotspot of production. I had stars in my eyes to become a screenwriter, I’d sent out a few of my projects and was getting some nibbles and interest for representation. It was exciting, exhausting, and disheartening on an almost daily basis. Watching Clapboard Jungle was like looking in a cinematic mirror. When the 2008 economic crash hit, it dried up a lot of prospects for independent filmmakers - including my own. I went from having the next year lined up for work as a featured extra or production assistant and possibly having an agent with a potential option on a script to dead nothing virtually overnight.

Seeing Justin detail his experiences through that market shakeup and the years that followed and his will to push through and persevere was a hard watch but an inspiringly honest one. Lifechanger may not have been the film he set out to make, but it’s the one he got finished, out to festivals, and in front of audiences - including this reviewer! It’s a genuine success story. It’s funny, it’s stressful, but it also makes you a believer that it can be done. Swimming With Sharks is often cited as essential viewing for young filmmakers to survive Hollywood. But before that - I’d say they need to see Clapboard Jungle. If you’re going to make it, you’ll have to make it for yourself. By the end of this, I found myself looking at my shelf of half-finished or abandoned projects and dreaming again.

And all along Justin's journey, we get to hear from a variety of legendary filmmakers and how they got their projects off the ground or the crap they endured on their journey to success. The Shape of Water’s  Guillermo del Toro, Dawn of the Dead’s George Romero, Friday the 13th gore effects master and NOLD’90 director Tom Savini, The Stand and Critters filmmaker Mick Garris, and Manborg and Psycho Goreman director Steven Kostansk i- among numerous other movers and shakers in the industry drop by to give their two cents. This is a well-structured, thorough documentary that moves at a great clip. At 98-minutes, it isn’t so short that you feel cheated of the toughest brutal times, but it isn’t so long as to feel self-indulgent in the glory of success. It’s a journey film, and one worth following if you love the movies or have ever been inspired to create something and share it with the world.

Vital Disc Stats: The Blu-ray
Clapboard Jungle arrives on Blu-ray from Arrow Video in a deluxe single-disc set. Pressed on a Region Free BD-50 disc, the disc is housed in a standard clear hard case with slipcover and reversible insert artwork. The disc loads to an animated main menu with traditional navigation options. Since the disc is region free you don’t need to worry about your player. Also included is a 22-page booklet featuring a great essay by Brian Yuzna.

Presented in 1080p this 1.78:1 transfer is indicative of a multi-source documentary. While the nuts and bolts of it look great, it’s also limited by the camera source of any given scene. As such, when Justin is first introducing himself and going to festivals, the quality can shift along his journey to the finish line. One shot details can be strong and strikingly clear, the next because of the background lighting it might be hit with some blooming or be very dark. This is a multi-year archive of footage shot on a variety of camera systems often under less than ideal conditions - so it’s a take what you can get. It doesn’t look bad at all. It’s like watching a video diary. When Justin travels to Amsterdam and Cannes it looks amazing! Likewise, by the time Lifechanger is going before festival screens, the image quality has become a little more consistent and uniform. The many interview segments with filmmakers, actors, and producers are the best looking moments because there was time for proper camera and lighting setups.  This is a difficult transfer to assign a general grade to since it really is a case of “what you get is what you get.”

Similar to the video transfer, the DTS-HD MA 5.1 mix is solid and strong, but also not a rip-roaring action-fueled surround sound masterpiece. In fact, much of the mix holds the front/center fields without a lot of side/rear movement. When the film is in a busier location at some of the bigger events or film festivals, the action opens up and those surrounds get a little more traction. But like many other personal documentaries like this, the soundscape is mostly focused on the individual on-screen or the narrator. As such dialog is strong throughout. Likewise, when Justin is interviewing a filmmaker, the audio quality is solid and focused so you never struggle to hear anyone.

While this documentary itself almost feels like a bonus feature to Lifechanger, this release is greeted with an incredible bonus feature package that goes above and beyond. On top of three interesting and informative commentaries, you get five hours of extended interviews, so those little soundbites you see from your favorite filmmakers and actors aren’t the only tidbits. You've got a lot more to dig into. Additionally, you get two more documentaries and thirteen short films from Justin McConnell. The audio commentaries are great and informative, but the meat of these bonus features really are the extended interviews with dozens of filmmakers, producers, and actors - so absolutely check those out.

Everyone loves the movie about the guy who succeeds at his goal. Movie lovers especially love the flick about the upstart following their dream to make it big and get a film in front of audiences. Clapboard Jungle is just that sort of documentary. Justin McConnell chronicles his years-long journey to break away from short films and achieve his goal of getting a feature off the ground, fully funded, filmed, finished, and in front of an audience. This is a refreshingly honest look at independent filmmaking and the state of the industry and it's a worthwhile journey.

Arrow Video delivers an excellent Blu-ray release, the main feature looks and sounds great. The bonus feature package is massive giving you several hours of excellent worthwhile materials to pick through. If you’ve ever thought about making your own film with starry eyes toward Tinseltown, you need to see this one. Highly Recommended.