Night of the Living Dead (1990), the remake of the harrowing, heartfelt drama about a group of socially mismatched people failing to come together in the face of adversity… the recently dead who have returned to life and are hungry for human flesh. For a remake of a horror classic, NOLD90 is pretty good and stands on its own two undead limbs alongside the classic Romero original. NOLT90 rises from its grave to take another bite out of Blu-ray - only this time it's finally done right! Featuring a fresh new scan without idiotic revisionist color grading, a new and more robust audio mix, and a lacking-but-decent assortment of bonus features. This is the release fans have been waiting for! Highly Recommended!

If you've seen the 1968-original and this 1990-remake, you know they're similar animals but with slightly different stripes. In NOTLD90, Barbara is a modern woman capable of taking care of her own business without needing a man to save her, compared to the wilting flower version in NOTLD68. I love both films. Obviously, I cherish the original film a little bit more, but I have a strong love for this scrappy version that proves that not all remakes are a bad idea or a complete waste of time. The cast is great and the pre-Candyman casting of Tony Todd as Ben and Patricia Tallman as Barbara were brilliant choices. Equally fun was the late great Tom Towles as Harry Cooper - the cowardly dickhead you always love to hate. If you've somehow missed this one, give it a spin, I'm pretty sure you'll find it's worth your while.

For a little more robust review, check out my review of the AU Import from Umbrella Entertainment HERE.

Now for some screenshot comparisons!

"They're coming to get you, Barbara!" 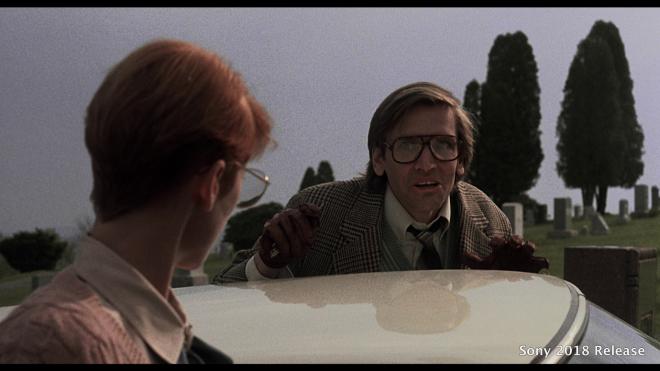 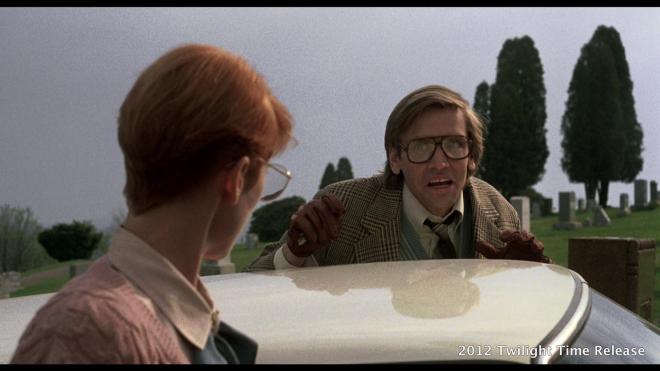 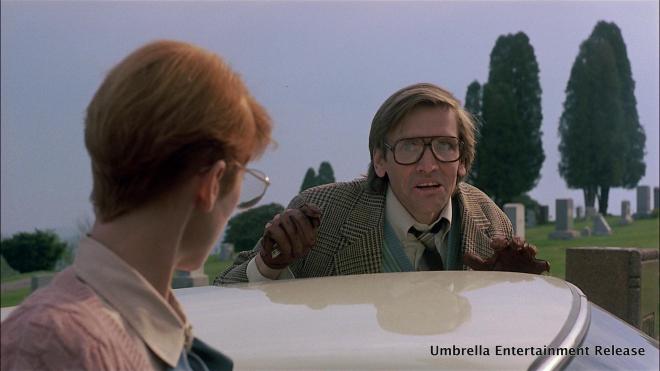 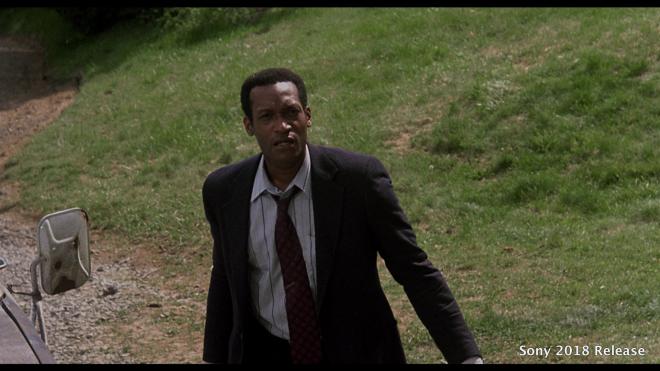 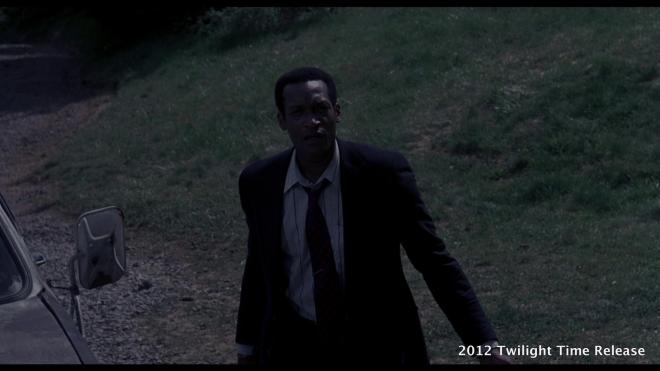 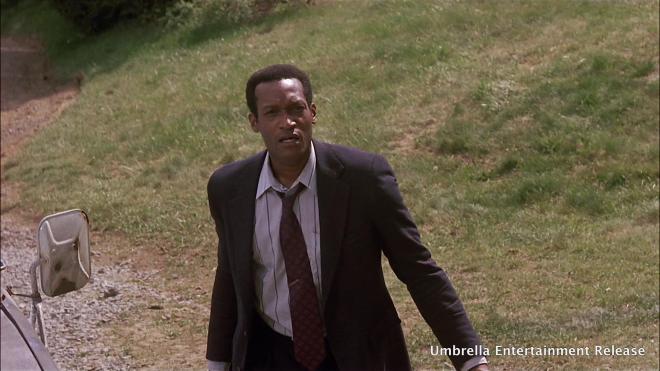 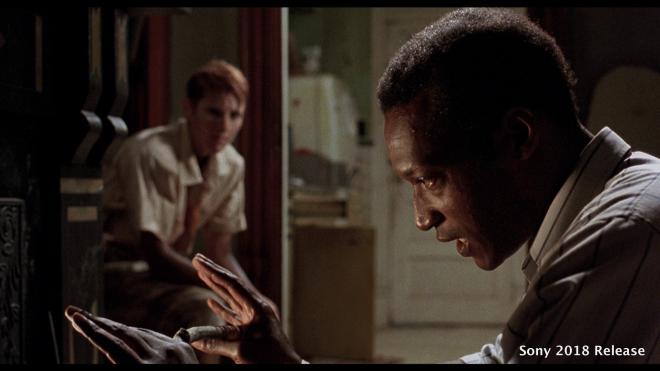 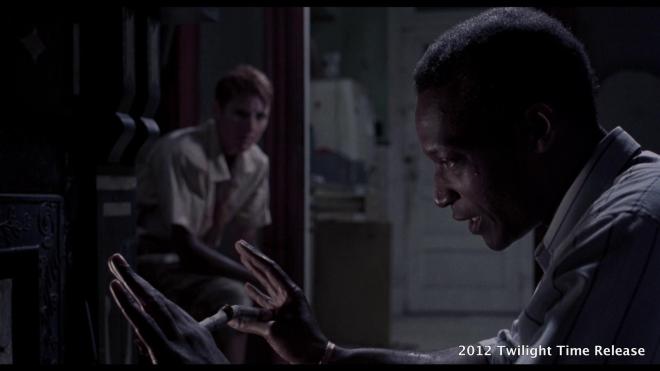 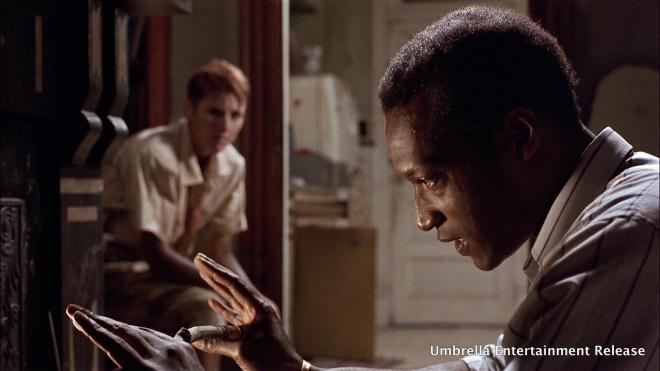 "Since you ain't doing anything, Cooper..." 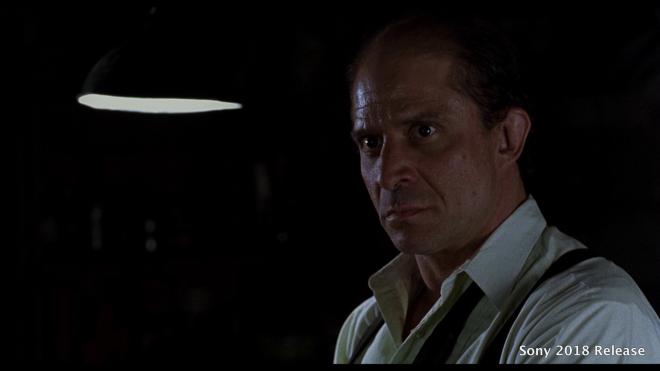 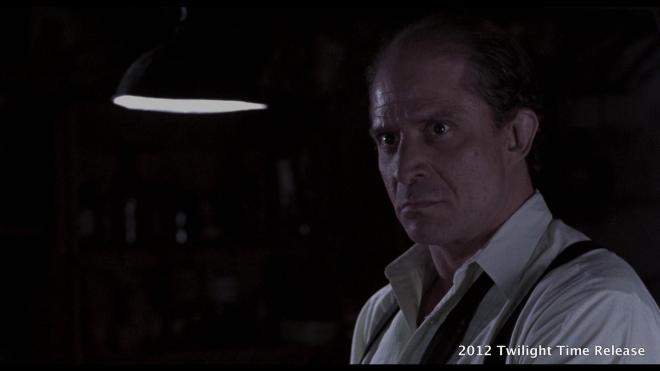 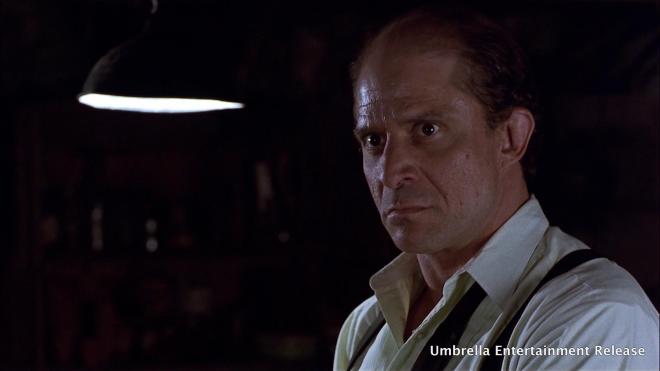 Sony Pictures delivers Night of the Living Dead (1990) onto Blu-ray as part of their MOD service complete with a bland boring white sticker label. Pressed onto a Region Free BD-25 disc, the disc is housed in a standard sturdy Blu-ray case that features the original theatrical poster artwork free of spoilers that adorned the older VHS and LaserDisc releases. The disc loads to a static and very basic main menu with traditional navigation options. 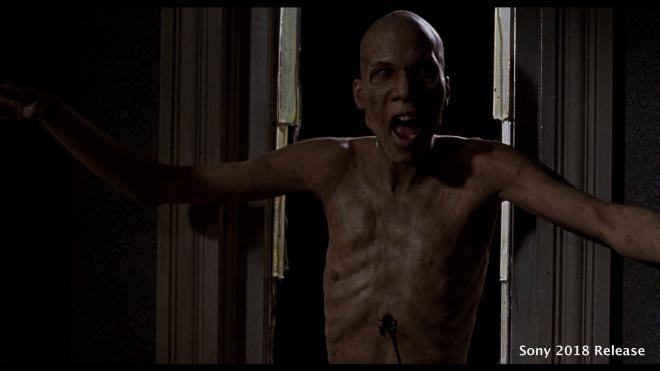 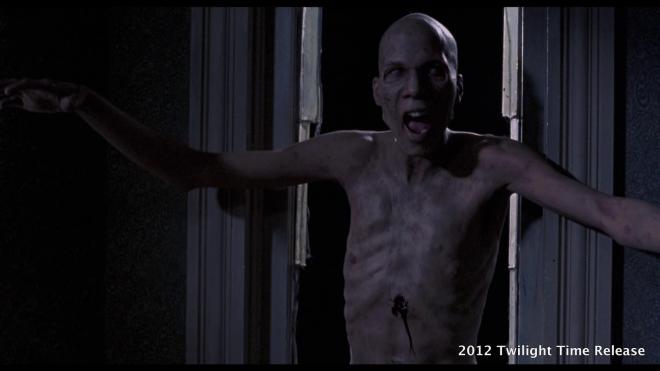 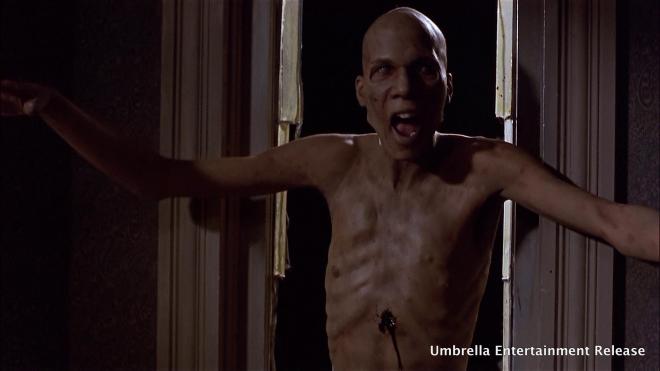 This is it. This is the one folks. For those of you who have kept track, NOLD90 has endured some pretty rough treatment on Blu-ray, with tragically terrible and acceptable-but-very-flawed results, depending on the release. No need to shoot a dead zombie in the head twice covering those, check out our review for the unfortunate Twilight Time release, and my review for the Umbrella Entertainment release.

For this 1080p 1.85:1 transfer, it appears Sony went back to the 4K scan they originally prepared for Twilight Time, but before the stupid application of darker color grading to give the opening more mood and ease the transition from light to dark. Don't know who was responsible - doesn't matter - that release, sadly, just plain sucked. In comparison, with the natural coloring and light back in play, this transfer actually gets to enjoy the full range of details it natively has to offer. The Twilight Time release might have had strong detail levels, but you wouldn't know it because of the craptacular coloring. Now you can actually see everything the image has to offer. Facial features, clothing, the distressed nature of the old farmhouse, Patricia Tallman's freckles, they're all on display. Fine grain is present without ever becoming too noisy or intrusive and gives the image a rich unprocessed and film-like appearance.

Colors! This release of NOTLD90 actually has them! While I appreciated that the Umbrella Entertainment release went back to the old master used for the DVD and the HD streaming, after doing some disc swapping through the three releases, that one just feels too bright. This new Sony disc sits nicely in the middle allowing for great primaries and natural colors fo the farm to come to life. Flesh tones also look more healthy and accurate than the Twilight Time disc and less pale and a little warmer than the UE Release. Black levels are uniformly excellent giving the image plenty of depth with even contrast letting bright whites have their day in the sun without blooming.

As this is sourced from a more recent restoration, the speckling and slight scratches that were present in the Umbrella Entertainment release are absent here. The only slight issue is in the begging there looked to be some brief frame wobble. But that's the worst of it.

Looking over these three releases side-by-side, I would grade the Twilight Time disc a 1/5, I'd regrade the Umbrella Entertainment disc a respectable 3.5/5 and this new release from Sony a strong 4.5/5.

This is likely the best NOLD90 will ever look on home video, as I have doubts it'll see the light of day on 4K Ultra HD anytime soon, if ever. Considering the differences between the releases in color tone, user experience is going to be the deciding factor. From VHS to Laserdisc to DVD, and now three times on Blu-ray, this latest Sony release is my preferred transfer. It's not as overly-bright as the Umbrella disc, but it isn't anywhere near as dark as the Twilight Time disc while offering vastly improved details over any SD release.

NOTE: As you may notice, there is some slight reframing between each release. All are framed 1.85:1 but you can see that each release is ever so slightly zoomed in or out. Not a drastic change, there isn't really a significant amount of image information lost or gained, but I felt it was worth mentioning just the same. 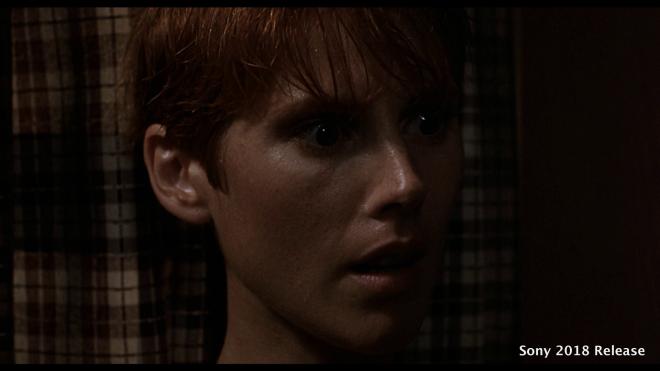 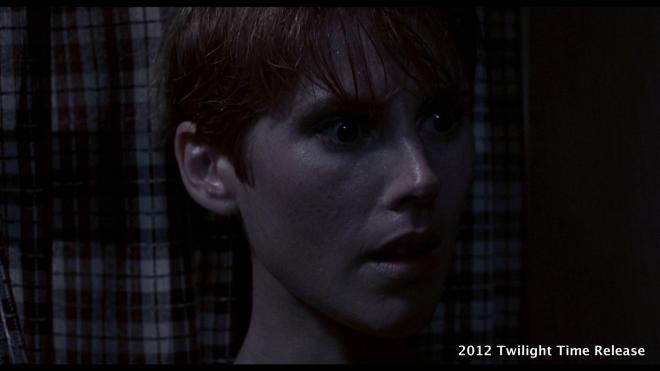 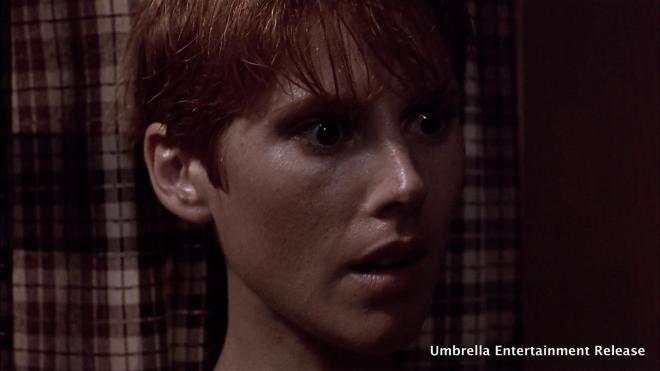 For more good news, it sounds like Sony has gone back and touched up the English DTS-HD MA 5.1 mix for this release. The TT and UE releases both had decent mixes, except the TT release removed the camera sound effect during the ending montage and lacked some important other sound effects. Like the UE release, that camera sound effect at the end has returned. Overall this mix and the UE mix are very similar with great dialogue clarity and the score by Paul McCollough keeps the low tones and mood going nicely. The more notable change for this mix I could detect after flipping through the discs again was how much more prominent and impactful the sound effects were here. In particular, the gunshots and the big explosion have a little extra kick and oomph with stronger dynamic placement if someone is shooting the gun from the right or left side of the frame. The shot to the point of impact playing on the opposite channel is a great effect. Thankfully the tinkering doesn't sound overly processed or as if new effects were added to cover up old ones. Free of any age-related issues, this audio mix is clean, clear and to my ears sounds great.

I would grade the Twilight Time disc a 3/5, I'd regrade the Umbrella Entertainment disc a solid 4/5 and this new release from Sony a strong 4.5/5. 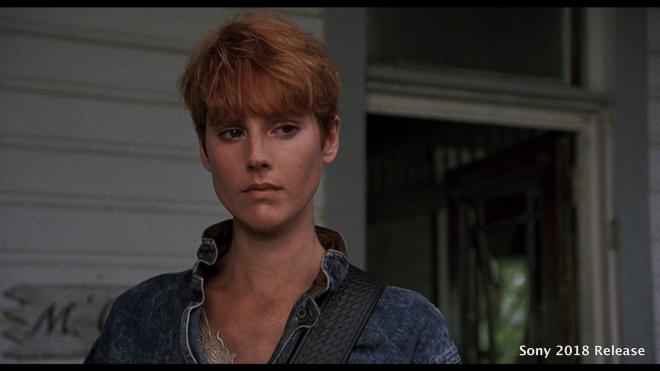 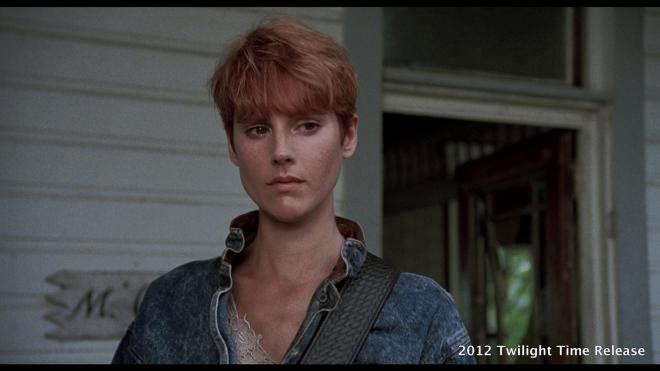 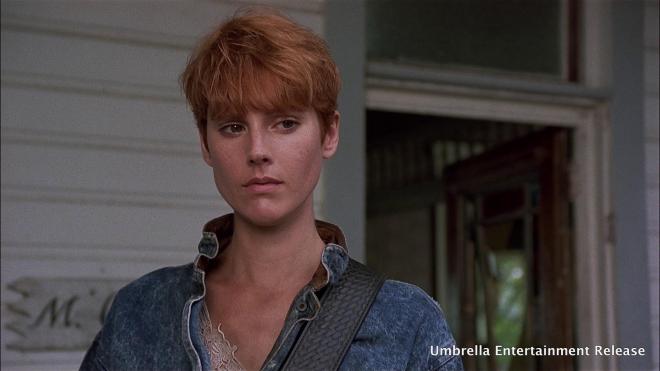 While the picture and audio quality are great, the bonus features package doesn't offer up any new material. The great audio commentary by Tom Savini and the Making Of mini-doc are all sourced from older releases. It's great to have them back this release is lacking the Tom Savini and Patricia Tallman interviews, an older behind the scenes featurette, and the interviews with the makeup effects crew that were all on the Umbrella Entertainment release. 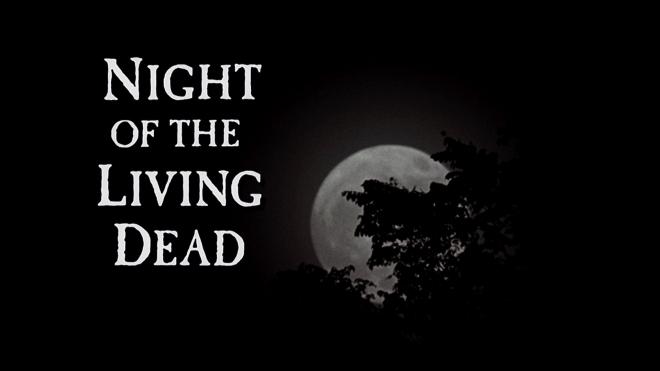 Fans who have longed for a good and proper, bold and beautiful Night of the Living Dead (1990) Blu-ray finally have the disc they've been waiting for. On a technical level, the image transfer and the audio mix leaves the Twilight Time release in its grave. The image here is also a notable and worthwhile improvement over the dated master sourced for the Umbrella Entertainment release while only offering a modest improvement in the audio department. On the bonus features note, you may need to keep all your discs in order to maintain a "complete package" of features. However, if you don't own any other others, this disc has the two highlights with the great audio commentary and the vintage mini-doc. As the night moves to dawn, this Sony release is what fans have been wanting ever since that tragic 2012 Twilight Time release. Highly Recommended.