What would you do if you could always be young - so long as another person has to die? That's the precarious position one man finds himself. By absorbing a person, he becomes the person - but they die in a horrific way. All he wants to do is find a way to be with the woman he loves - but he could be risking her life in the process! With plenty of Body Horror to go around, Lifechanger is surprisingly poignant without shying away from the grotesquery included in its premise. A solid A/V presentation and a host of worthwhile bonus features round out this Blu-ray release. If you're game for some fresh indie-horror that's actually well made - take a spin with Lifechanger. Recommended.

Drew (voice of Bill Obserst Jr.) has been dozens of people over decades of time. He's a shapeshifter. He has to shapeshift or the rot takes over the host body. The only problem, when he changes bodies, the person he changes into has to die. When he was younger he could go weeks, now for some reason, he's having to change bodies nearly every 24 hours. As he struggles to control his powers, he desperately tries to connect with Julia (Lora Burke) the woman he loves who doesn't have a clue who he is - even though they've met many times before. 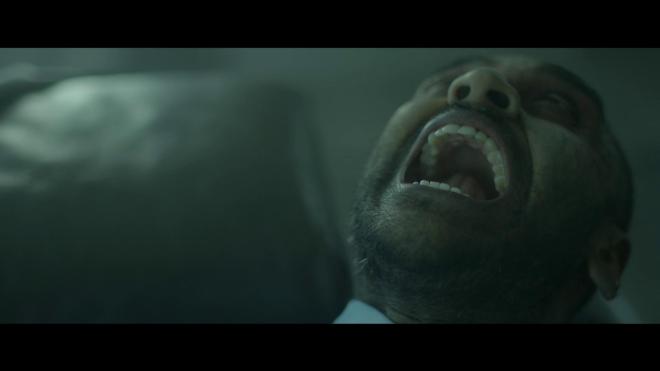 I'm a bit of stickler when it comes to my independent horror watching. I'm always willing to give new talent a try but you can always tell who really has their heart in it. Some do it because they think making a good horror movie is easy - it isn't. Others do it because they have a smart concept that is genuinely creepy and all they need is a modest budget to pull it off well. Thankfully Writer/Director Justin McConnell's Lifechanger falls in the latter category. It may not be perfect, I have some relatively small quibbles, but the show has its heart - and guts - in the right place. When it comes time to deliver the body horror, there are some pretty gnarly and impressive sequences!

Now, this idea of a would-be killer changing bodies isn't exactly new, The Hidden, Fallen, heck even Jason Goes to Hell gave it a shot. What I like about the approach with Drew is how he becomes a reluctant participant in his own curse. Killing is a means of survival - but he'd like to do a lot less of it. He's not doing it out of spite or revenge or an attempt to kill someone in particular, he does it because he doesn't have much choice. The consequence of changing bodies is that he more than literally becomes the other person. If they were a mechanic, he knows how to fix cars now. If they were a dentist - as is the case with one poor sod - he knows how to fix teeth. But he also gets their emotional baggage. The things and people they love and hate become the things he loves and hate, so you get this impressively blurred line of emotional motivations for why he's trying to get close to Julia.

I don't want to say any more on the plot front because doing that would give away some spoilers and I'm just not that kind of reviewer. The best part of Lifechanger is the cast. While there were a few familiar faces, most I hadn't seen before. Blessedly they're all professionals and bring their A-Games. It's really impressive to see how they're one character before they encounter "Drew" and the mannerisms they take on once he's become them. Each of these moments is capped off with some impressive gore effects work - the transformation sequences are pretty horrific and an impressive feat of practical and what appears to be some digital effects work.

As I said, I do have some quibbles, but they're relatively small. My principal complaint is Drew's narration. While it's a necessary tool to understand what's happening in certain places, I could have done with less. Sometimes it was a tad on the nose. My only other small issue was the front end felt a little disjointed. Lifechanger took a few too many minutes in an 84-minute runtime to find its footing. Thankfully these issues are relatively small nitpicks on my part. That last half is spot on stuff and I really dug where the show went with the material leading up to a particularly grotesque and squishy final moment!

If you're in the mood for a fresh new horror film you probably overlooked or didn't know existed, check out Lifechanger. I like a movie like this that knows how to take its time and not rush things. If you give it the time to find its legs the reward in the homestretch is well worth the payoff. For a tragic piece of body horror, Lifechanger proved to be a solid piece of work with clever writing, smart direction, and a hell of a talented cast.

Life Changer arrives on Blu-ray courtesy of Uncork'd Entertainment. The screener copy supplied for this review is the 2-disc Blu-ray + DVD set that you can get from Amazon.ca that is pressed on a Region Free BD-25 disc and housed in a standard two-disc case. The disc you get from Amazon.com is apparently a MOD single-disc release without a DVD disc. From what I've been informed, there isn't any difference in bonus features or content - just how the disc is authored. The disc loads to a static-image main menu with traditional navigation options. 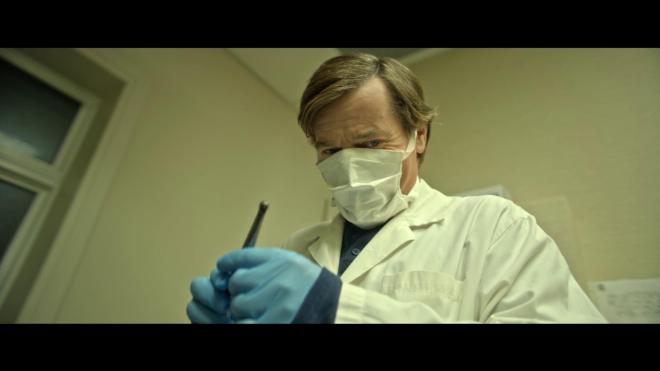 Lifechanger arrives on Blu-ray with a solid 1080p 2.35:1 transfer. There is an etherial haziness to the image the gives the film a nice dreamlike quality - but thankfully doesn't sacrifice details in the process. Facial features are sharp and clear and costuming is on point. Makeup effects get their day in the sun and the film's climactic reveal offers plenty of derailed squishy stuff to examine. Colors skew between cool blueish and warmer tones depending on the mood and atmosphere. During those moments blues and yellows get a little extra kick, but red is a constant companion - especially during the bloody bits. Black levels can get a tad muddy here and there, but most of the time they maintain their desirable inky shades. All around this is a clean image that lends itself well to the mood of the movie. 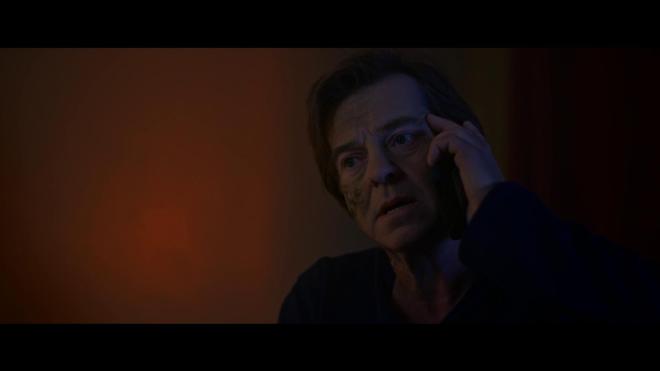 Lifechanger makes great use of its DTS-HD MA 5.1 audio track. Dialogue is clean and clear, occasionally the voice over could sound a little muddled but not unintelligible. Sound effects and imaging for the mix aren't as dynamic as your average action flick but it punches in the right places. Bar scenes or busy streets offer plenty of ambient surround notes to keep the channels working.  When the squishy stuff hits there's some nice auditory emphasis. Also, a scene in a dentist office is pretty unnerving if you're like me and hate getting your teeth poked or drilled.  Scoring is solid material and rounds out the mix nicely. Levels are on point without any need for adjustment. All in all, this is mix is on point and delivers. 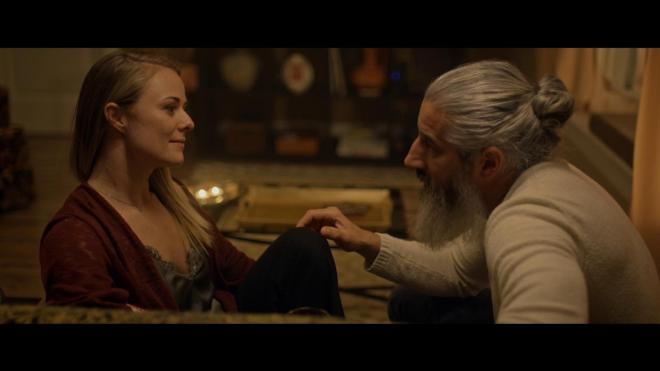 Kudos for not skimping on the bonus features! It's actually nice to report that it took me a while to pick through everything. The Audio commentaries are informative and the feature-length making-of is good stuff. There's a lot of worthwhile material to walk through here and it's nice that it covers a lot of the production aspects in addition to the story genesis. If you're taken by the show, check this extra content out, it's worth the time. 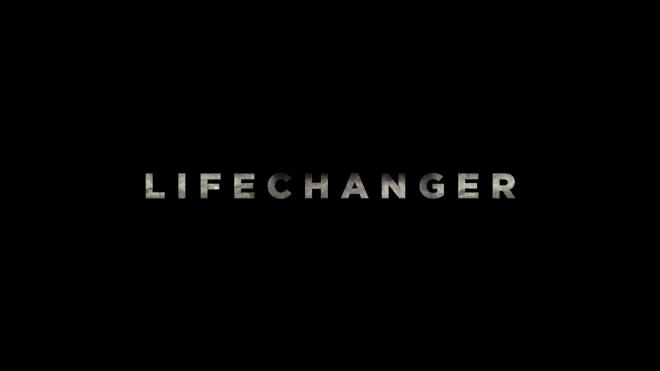 Justin McConnell's Lifechanger shows a lot of respect for the horror genre and delivers plenty of ooey-gooey body horror goodness along with some solid storytelling and character development. It may be more thoughtful and meditative for some, but if you like slow burn horror, you should enjoy the pace Lifechanger offers. This two-disc set offers a solid A/V presentation as well as a bunch of great bonus features to pick through. If you're looking for something fresh and new, give Lifechanger a run through. Recommended.