For our review of the Friday the 13th series, we've broken the evolution of a pop-culture horror icon into three timelines. Four decades later, the franchise remains a fun horror romp of the unstoppable killing machine Jason Voorhees and his pursuit of ridding the world of attractive, hormonally-driven young people. Celebrating the first movie's 40th anniversary, Scream Factory brings the collection to life as a massive, stunningly attractive 16-disc "Deluxe Edition" box set with an incredible wealth of bonus features. The first four films and the ninth and tenth installments benefit from brand-new remasters of the original elements while the rest remain the same satisfying transfers as before. All twelve features come with excellent lossless audio presentations, and the entire package makes for a Highly Recommended release. 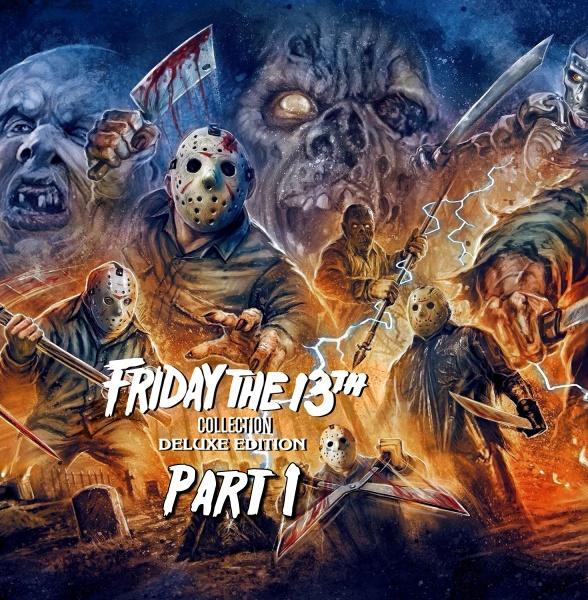 When revisiting the horror franchise that introduced the world to one of the most popular icons of the genre, Jason Voorhees, we find a bizarrely but comically amusing continuity that defies logic while also turning the character into a monstrous anti-hero. Although its all-too-familiar formula has largely lost its effectiveness with modern audiences, Sean S. Cunningham's Friday the 13th (1980) essentially cemented the new-at-the-time subgenre into a viable blueprint that has been imitated countless times throughout the series.  However, the Jason legacy doesn't truly begin until the sequel, showing him as a furious, deranged killer, but it wasn't until parts six through nine that he evolved into the unstoppable, supernatural killing machine horror fans dearly love and remember. The third part of Jason's journey is an oddball medley of uber-nanotechnology, a confrontation between genre icons that reimagines Jason's origins and a Bayhemed reboot that is essentially a potpourri of the first four movies.

What continues to amaze me though is that the horror at Camp Crystal Lake forty years later still manages some small semblance of originality. While young campers crowd the lake with their misbehaving, reckless hormones, the story's "Final Girl" is distinct and plainly defined with a vulnerability she must overcome so that it genuinely surprises when she becomes a capable, resourceful fighter towards the end. The Jason character is mentioned in the first movie more as a device, as both the killer's motivation as well as for generating a terrific air of mystery. But thanks to Cunningham's strong direction, solving the true identity of the killer is a great deal of the fun, one which slowly builds towards a well-earned shocking reveal. With memorable music by Harry Manfredini and gory effects by legendary makeup maestro Tom Savini, the slasher classic remains a blast. (Movie Rating: 4/5)

Arguably, the sequel is where the real fun begins, as this wildly-entertaining direct follow-up smartly expands on the previous established storyline while also launching into new territory: the proper introduction of Jason Voorhees. Sporting a burlap sack over his head with one eye-hole and wielding a pitchfork, this early portrayal of the character as a relentless, backwoods psychopath on a revenge craze slaughtering horny, inappropriate young people ranks as my second favorite version of Jason. However, picking up five years later at a counselor training camp not far from Camp Crystal Lake, a big part of my love for Friday the 13th Part 2 comes from the plot turning the events of the first film into urban legend, stories literally told around a campfire. With Steve Miner at the helm, the characters are, once again, not complete dunces, and the suspense slowly escalates and build to a satisfying conclusion. (Movie Rating: 3.5/5)

Picking up moments after the sequel, Friday the 13th Part 3: 3D is where the series begins to drop the ball and the formula incorporates familiar genre tropes. Granted, the writing remains on par with the previous two, but characterization takes a nosedive while the heroine comes with a needlessly unbelievable backstory. On the bright side, the third entry marks a milestone in Jason's history. This is where we begin to oddly cheer for the killer while the timid, self-deprecating Shelly adds a redeeming charm. The amateur makeup-effects artist is responsible for acquainting Jason with his trademark hockey mask, and after picking up a machete in the second half, Jason dons, for the first time, the recognizable and beloved outfit that's become a Halloween staple. This is also the start of familiar camerawork where Jason hides in the shadows or stands directly behind his victim before chopping them down. (Movie Rating: 3/5)

Although stupid behavior and decisions start becoming a comfortable truism by this point, things dramatically improve in The Final Chapter — which of course it is not — starting with the more creatively ghastly deaths. With Jason now expanding his murder spree to include pretty much anyone living within the vicinity of Camp Crystal Lake, the fourth entry in the franchise comes several memorable moments, like Crispin Glover's hilarious impromptu dance moves and the beautiful Wrigley's Doublemint twins. More to the point is the plot introducing both Jason and horror fans to Tommy Jarvis, played with impressive charisma by Corey Feldman. The amateur makeup-effects artist and mask-maker is a significant figure in the evolution of the iconic machete-wielding, hockey-masked killer, as it brings an end to Jason as a still vulnerable maniac, brought to beautifully gruesome reality by Tom Savini. (Movie Rating: 4/5)

The biggest and most anticipated reason for this new box set is that the first four movies in the franchise were treated to 4K remasters of the original camera elements. Incredibly, the results are absolutely jaw-dropping, exceeding all expectations and making these hands-down the best any of them have ever looked on home video.

The brand-new AVC-encoded transfers for each deliver a remarkable step-up over previous editions with the first two entries providing the most impressive upgrades of all. While they each show sharper, more distinct lines in the cabins and surrounding foliage, Cunningham's cult classic and Part 2 enjoy significantly better definition and resolution overall. Of course, given their age and production limitations, the movies can suddenly fall to the softer side of things, and this is especially true when watching the 2D verison of Part 3 and for several chunks of The Final Chapter. However, these minor issues are understandably forgiven as inherent to the photography and the condition of their respective sources.

Nevertheless, all four films come with a stable and thin layer of natural grain throughout, rendering each with an appreciable film-like quality. Contrast also displays better balance and luminance with brighter, cleaner whites and notably crisper highlights. At the same time, black levels are richer with improved accuracy and excellent visibility of the finer details within the darkest, murkiest corners of the frame, providing all four with a strong dimensionality. The best and most striking aspect of all four has to be the bolder, more energetic, especially animated reds of the clothes and the livelier greens of the grass and leaves. Flesh tones also appear more natural with healthier complexions and lifelike textures in the faces of the cast.

Part 3 may be the weakest of the four in standard 2D, but with it finally receiving a proper 3D conversion, the brand-new 1080p/MVC MPEG-4 encode actually looks great and far superior to the previous anaglyph 3D versions, which should come as no surprise. There is a bit of ghosting here and there, but thankfully, it's nothing too egregious or terribly distracting. Overall, depth is largely outstanding with excellent separation of the foreground from the background, and several objects feel as though crashing through the screen thanks to the filmmakers' gimmick photography. Grain can fluctuate in a few scenes, mostly during dark interiors, but the change is tolerable and only gives the movie a welcomed film-like charm.

Along with the video, all four films also enjoy new DTS-HD MA soundtracks, and as is customary with most Scream Factory releases, owners have a choice between the original monaural and stereo tracks or rebranded 5.1 remixes. Personally, I've opted for the former when watching each of the movies, and not too surprisingly, they are a welcomed upgrade over previous releases even though they don't offer as significant a jump over their Dolby TrueHD counterparts like the video transfers.

Interestingly, the first two entries display a better, more extensive mid-range, generating an attractively broad and welcoming soundstage with well-balanced channel separation throughout. Clarity and distinction is notably improved as well, providing some of the louder, more intense sequences excellent definition, especially in Harry Manfredini's iconic score. Likewise, the low-end is noticeably a bit more robust and weighty, supplying the aforementioned music with a good sense of presence. And all four films come with superior, very precise dialogue reproduction from beginning to end.

Unfortunately, Part 3 and The Final Chapter continue to come off a bit screechy and bright in the higher frequencies and during the loudest segments. In fact, a tinge of noise, crackling and hissing can occasionally be heard in the voices from time to time. To be perfectly honest, the mid-range remains fairly uniform for a good chunk of the time in both movies, and the low-end is still somewhat lacking compared to the previous two, making for slightly flat and dull action sequences. Nevertheless, the small improvements greatly outweigh the drawbacks, especially in Manfredini's score, and actually make for a better, more engaging soundstage fans will definitely appreciate.