Some Like It Hot represents the pinnacle of movie comedy, and this Criterion edition honors Billy Wilder’s iconic farce like no other home video release before it. With a brand new 4K restoration that further ignites an already frenetic film and a host of absorbing supplements, this marvelous Blu-ray rendering beautifully captures the near-perfect work of Wilder, Marilyn Monroe, Tony Curtis, and Jack Lemmon. It’s a must-own release and an essential disc for every film lover.

The joke is an old one. Desperate men put on a dress, slip into high heels, slather their faces with pancake makeup, and talk in falsetto tones to try and fool the establishment, beat the system, or dodge a rap. Hollywood can’t get enough of it, and for decades, Tinseltown has recycled and refashioned the premise until it’s become a tired cliché. Yet the best cross-dressing comedies don’t just rely on the inherent outrageousness of what is essentially a lowbrow burlesque gag; they make statements about sexual roles, male-female equality, and personal acceptance. And the best of the best of gender-bending farces is undeniably Some Like It Hot.

Packed with memorable lines, hilarious situations, and a deceptively high degree of insight, director Billy Wilder’s captivating classic continues to charm audiences 60 years after it was first released. Because Wilder and co-writer I.A.L. Diamond set their zany tale in a nostalgic era - the roaring 1920s - the film doesn’t have to fit the constraints of any contemporary context. Instead, it can concentrate on the timeless interactions and misunderstandings between men and women, as well as their often warped perceptions of each other. It’s a clever conceit that keeps the movie wonderfully fresh, no matter how many times we’ve seen it.

The story of two down-on-their-luck Chicago musicians (Tony Curtis and Jack Lemmon) who unwittingly witness the bloody St. Valentine’s Day Massacre, then masquerade as women and join an all-female band in a frantic attempt to escape the wrath of a vengeful mob kingpin (George Raft) is just a setup for a surprisingly frank examination of sexual and gender psychology. Before the guys can get comfortable in their pumps and undergarments, they meet the bubbly, jiggly, and oh-so-blonde Sugar Kane (Marilyn Monroe), the band’s lead singer and every man’s fantasy girl. And while both men are attracted to Sugar like flies to honeycombs, they become her best bosom gal pals and in turn see the vulnerability and insecurities that make her human.

The dilemma then becomes do they exploit what they learn about Sugar as women and use it to their advantage as men to get her in the sack? Joe (Curtis) initially does, masquerading a second time as Sugar’s fantasy guy, a rich, bespectacled yachtsman with a Cary Grant accent and inferiority complex. Meanwhile, Jerry (Lemmon) takes his feminine role too seriously, summoning his inner gold-digger and leading on dirty old millionaire Osgood Fielding III (Joe E. Brown), who’s unabashedly smitten with Jerry’s sassy alter ego, Daphne. What will happen when Sugar finds out her Mr. Right is really her best girlfriend who isn’t really a girl at all but a wolf in sheep’s stockings? And what will happen when Osgood discovers the dreamy Daphne is a baritone with a beard? 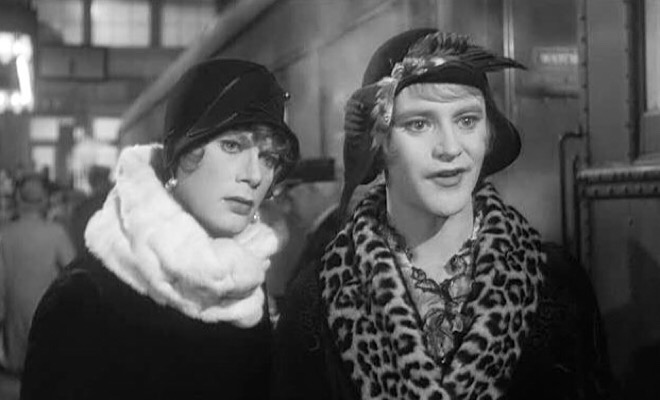 As the film’s hilarious last line so perceptively points out, nobody’s perfect, and that really is the point of what may seem to some like a pointless comedy. We’re all a jumble of inconsistencies, aberrations, quirks, and fetishes, and who the hell really cares! We’re people. We’re silly, we’re messy, we’re weird. But we’re all wonderful in our own way. Wilder presents this viewpoint with an intoxicating vivacity and a tongue firmly implanted in cheek. Everything is just outrageous enough to be funny, but there’s always an underlying reality, and that’s what makes the movie resonate and endure.

On top of that, it’s pretty darn risqué for a film made in 1959. Sexual allusions - both straight and gay - abound, and several scenes exude a palpable degree of heat. That should be expected for a movie titled Some Like It Hot and starring arguably the world’s most iconic sex symbol, Marilyn Monroe. The titillation, though, has a purpose, and Monroe, with a delightful lack of abandon, both celebrates and lampoons her sultry image. Like everything in the movie, it’s an angle, a ruse, and when Sugar shows us her inner dimensions, we see Marilyn’s, too. Both women use their sexuality, but it’s not who they are. And both are objects of desire who desire to be wanted for what’s underneath their beautiful skin.

Curtis and Lemmon rightfully receive the lion’s share of praise for their broad, supremely funny dual portrayals. Both nail their respective parts and seem to be having just as much of a blast as we are. Yet Monroe, who was often considered a dumb blonde and perfectly portrays one here, should not be overlooked or dismissed. Though elements of the Monroe persona exist in Sugar, Marilyn fleshes out (pardon the pun) the character, imbuing her with copious warmth and tenderness and a doe-eyed naïveté that’s irresistible. Monroe was under tremendous strain during shooting - she was pregnant (and would tragically suffer a miscarriage two weeks after production wrapped), her marriage to playwright Arthur Miller was beginning to crumble, and her innate insecurities and dependence on prescription drugs made it difficult for her to keep up with the rigors of filming - yet rarely does she seem more natural or carefree on camera. Her inextinguishable luminosity casts a glow over the movie and lends it essential humanity. In an ocean of caricatures and disguises, she’s the real thing.

Wilder, who directed her in The Seven Year Itch, brings out her best, and his impeccable sense of comic timing, appreciation of the absurd, masterful pacing, and supreme ability to implant nuggets of truth in a farcical morass help him transform this merry mélange of madcap mayhem into cinematic art. Joe E. Brown’s memorable closing quip, “Nobody’s perfect,” remains all too true, but in the annals of screen comedy, Some Like It Hot comes closer than most to achieving that elusive and lofty distinction. 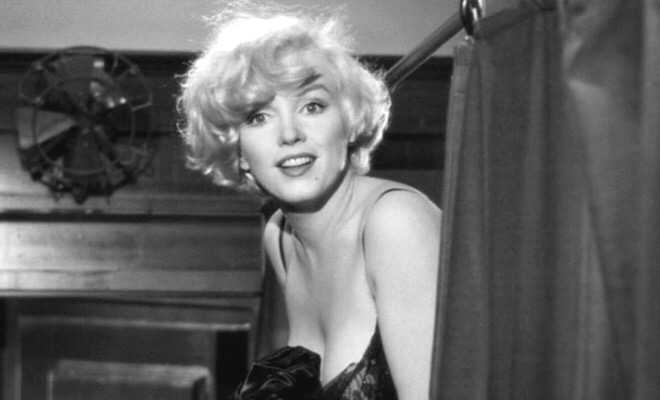 The Criterion edition of Some Like It Hot arrives on Blu-ray packaged in a standard Criterion case. A fold-out, 12-page booklet featuring an essay by Sam Wasson, cast and crew credits, transfer notes, and a collection of black-and-white scene publicity stills are tucked inside the front cover. Video codec is 1080p/AVC MPEG-4 and audio is LPCM mono. Once the disc is inserted into the player, the static menu with music immediately pops up; no previews or promos precede it.

The liner notes state this brand-new 4K restoration of Some Like It Hot was struck from the 35 mm original camera negative, with some scenes that were missing from that negative taken from a 35 mm duplicate negative and a 35 mm fine grain positive. The result is a stunning presentation that lifts this classic film to new heights. Grain is evident, but it’s beautifully resolved, maintaining the feel of celluloid. Excellent clarity helps the film achieve a new degree of immediacy, but contrast is the biggest asset here, as rich blacks constantly play off crisp whites like the sandy beach, Monroe’s terry cloth robe, Curtis’s bubble bath, and Monroe’s platinum hair. The grays in between are varied enough to bring out background details and make the day-for-night scenes look realistic. Other home video versions of Some Like It Hot look overly bright and washed out, but this transfer embraces the lushness of Charles Lang’s cinematography. A few scenes exhibit a bit of crush, but it never overwhelms the image, and nary a nick or scratch dots the pristine print. Without a doubt, this is the best Some Like It Hot has ever looked, making this Criterion restoration definitely worthy of an upgrade.

According to the liner notes, “the original monaural soundtrack was remastered from the 35 mm magnetic track.” The LPCM presentation is clear and well modulated, and free of any age-related hiss, pops, or crackles. Atmospherics like howling wind and sonic accents like gunfire, sirens, and the iconic puffs of steam that bounce off Monroe’s derrière are all crisp and distinct. Excellent fidelity and tonal depth enhance Monroe’s musical numbers, although a slight bit of distortion afflicts the opening bars of ‘Running Wild.’ The jazzy music score by Adolph Deutsch sounds appropriately bold and brassy, and all the priceless dialogue is easy to understand.

The previous Blu-ray release of Some Like It Hot included a DTS-HD Master Audio 5.1 track that only occasionally widened the soundscape. Though the scope of this mono track is limited, it’s authentic to the film and serves it well.

Criterion packs on the extras for this iconic comedy, importing almost all the supplements from the previous Blu-ray edition (with the exception of the audio commentary and expendable “Virtual Hall of Memories”) and adding some great new material and vintage interviews. For a look at the imported extras from the 2011 Blu-ray release, click here; for a rundown of the exclusive Criterion content, read on.

Cross-dressing comedies come and go, but Some Like It Hot has remained the sub-genre’s high water mark for 60 years. Often imitated but never equaled, Billy Wilder’s iconic farce is a masterwork from start to finish, thanks to its impeccable direction, perfectly constructed script, top-flight production values, and wonderful performances. Marilyn Monroe, Tony Curtis, and Jack Lemmon make a dynamite trio, and their work is as fresh today as it was six decades ago. Criterion finally gives this Hollywood classic the restoration it has long deserved, and the stunning video transfer will dazzle new and seasoned fans alike. Solid mono audio and a marvelous collection of new, vintage, and recycled supplements enhance this superior presentation. Must Own.

Sale Price 21.15
List Price 39.95
Buy Now
3rd Party 28.57
In Stock.
See what people are saying about this story or others
See Comments in Forum
Previous Next
Pre-Orders
Tomorrow's latest releases