"I've been looking for a girl every Saturday night of my life," says Marty Piletti (Ernest Borgnine, The Wild Bunch). Yet, despite all his efforts, this 34-year old Bronx butcher remains as shy and uncomfortable around women today as on the day he was born. So when he meets Clara (Betsy Blair), a lonely schoolteacher who's just as smitten with him as he is with her, Marty's on top of the world. But not everyone around him shares Marty's joy. And when his friends and family continually find fault with Clara, even Marty begins to question his newfound love - until he discovers, in an extraordinary way, the strength and courage to follow his heart. Winner of 4 Academy Awards® including Best Picture, Best Director (Delbert Mann, Separate Tables), Best Actor (Borgnine) and Best Screenplay (Paddy Chayefsky, Network).

One thing I've always been curious about Delbert Mann's 'Marty' are the reasons for replacing Rod Steiger with Ernest Borgnine for the title character. This isn't to discredit or undervalue Borgnine's wonderful Oscar-winning performance. Far from it. Rather, it's just simple curiosity, especially since Steiger initially performed the unmarried 34-year-old nice guy from The Bronx for television and made him the lovable oaf movie lovers admire today. The original teleplay aired two years earlier during a very short-lived period of television programming that was a bit more daring with thoughtful high drama. When it was expanded for film adaptation, many of the same actors reprised their roles, except for Steiger and Nancy Marchand, Marty's supposed homely love-interest.

As much as I'd prefer not to make comparisons, this particular film makes it nearly impossible, especially when both productions are only a couple years apart. Steiger's performance is withdrawn and internalized. He carries the frustration and ache of bachelorhood on his face, years of loneliness and a painful longing to know love are permanently imprinted into his being. Except for a one emotional outburst, he was once a happy-go-lucky fellow that has become a poor quiet sap who's given up. Borgnine doesn't necessarily do the opposite, but it's distinctly different because the actor is more expressive and exposed, both verbally and physically. His smile is genuinely full of warmth and charisma, a good, hard-working and genuinely nice guy who remains hopeful of someday finding Mrs. Right.

Keep in mind, the character of Marty still remains the same: a lowly and self-conscious fellow who is right at the point of accepting that marriage, children and having a life-partner by his side are simply not in his cards. Working at the local butcher shop, he continuously reminded by family, friends and female clients of his younger siblings already married with children, and then made to feel ashamed of himself for not doing the same, as if it were his fault or intentional. When he meets Clara (Betsy Blair replacing Marchand), Marty suddenly gains a bit of confidence. With Borgnine, the hope is apparent and immediate, but in the hands of Steiger, a sense of doubt and hesitancy sadly lingers, not sure if this could be real. Watching these two distinct interpretations of the same character is absolutely phenomenal to say the least, because they are equally effective, sincere and touching about a guy who deserves to be loved. 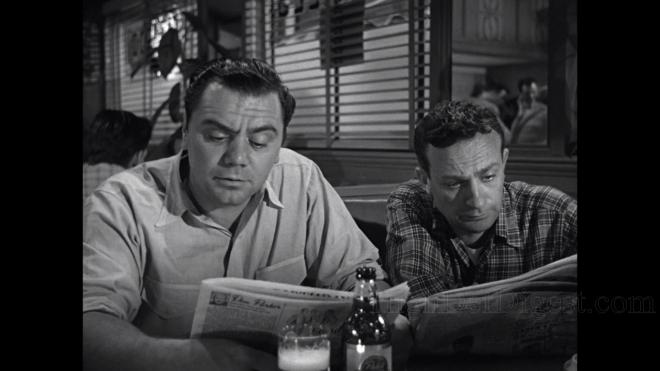 Paddy Chayefsky, the talented writer who decades later gave us 'Network' and 'Altered States,' revisited his script, lengthening the runtime with a subplot about Marty's newly-married cousin (Jerry Paris and Karen Steele), his aunt (Augusta Ciolli) and his mother (Esther Minciotti). The additional character development surprisingly works because it grippingly affects our protagonist psychologically with tragic doubts. Should the influence of others influence who he loves or should he simply follow his heart? Mann also returns to the material with the same understated camerawork he did for the TV drama, which today is actually impressive for TV of that period. It's somewhat simplistic, straightforward and steady, but there's also a rhythm to it that feels attentive and focused, allowing the story to evolve naturally. The approach also permits the performances, interactions and conversations to take center stage, to be the focal point.

Whether it's the original 1953 teleplay, which aired live on television, or the 1955 film adaptation, Delbert Mann's 'Marty' is to some extent a bold and daring motion picture for its period. Chayefsky's story is an observant and penetrating portrait of modern love, the challenge of finding the right person in a contemporary world where the burden to do so is high. On that deeper note, the wonderfully astute film also touches on the social and cultural pressures to conform to expectations while hinting at the difficulty of sustaining a marriage. One of the very few, practically rare, films to win both an Oscar for Best Picture and the Palme d'Or at the Cannes Film Festival, 'Marty' is a thoughtful and poignant cinematic masterpiece.

Kino Classics brings 'Marty' to Blu-ray on a Region A locked, BD25 disc inside the standard blue keepcase. At startup, viewers are taken directly to a static main menu with music.

Marty bashfully woos Blu-ray with a questionable 1080p/AVC MPEG-4 encode that adds to heated debates over who decides the proposed look of a film when made available to home video. The supposedly intended original 1.85:1 aspect ratio has been pillarboxed to a 1.33:1 frame. However, the picture doesn't seem to have been zoomed in, and it was actually shot using the entire full frame by cinematographer Joseph LaShelle. It was a common practice at the time during the slow transition from the Academy ratio to widescreen. Over the years, the film was been shown in both ratios without anyone commenting which is the correct one.

What makes this all the more frustrating and disconcerting is that the source appears to be in excellent condition, minus the usual suspects like minor scratches and white specks. Fine object and textural details are resolute and well-defined with visible pores in the faces of actors during close-up shots. Of course, there is the occasional but forgivable soft scene, and a couple suits create some very mild moiré effects. Blacks are cleanly rendered and accurate with dark, penetrating shadows that don't ruin delineation. Contrast is crisp and well-balanced, giving this endearing classic a nice high-def presentation, except for the OAR debate.

Things improve nicely in the audio department, though not by very much, or at least there's nothing controversial about it.

The uncompressed PCM mono soundtrack largely feels limited and restrained in the center, which is probably not surprising. However, despite good clarity and fidelity, imaging seems pretty lifeless with a somewhat flat, uniform mid-range. Even with lots of activity in the background, the lossless mix comes in like a thin line of sound down the middle. There's really no bass to speak of either, making the entire soundstage rather humdrum. The most attractive feature in the presentation is the excellent dialogue reproduction, delivering clean, crisp vocals full of emotion.

Whether the original 1953 teleplay or the 1955 film adaptation, Delbert Mann's 'Marty' is a bold and daring motion picture for its period with remarkably memorable performance.  One of the rare films to win both a Best Picture Oscar and the Palme d'Or, 'Marty' is a thoughtful and poignant cinematic masterpiece. With a controversial but still strong picture quality and good audio but lacking supplements, the overall package is acceptable and will be admired by cinephiles in spite of those few minor drawbacks.

Sale Price 46.99
Buy Now
3rd Party 17.87
In Stock.
See what people are saying about this story or others
See Comments in Forum
Previous Next
Pre-Orders
Tomorrow's latest releases