When one studio is going to put up big bucks for a high-concept idea with major talent - you can expect rival studios to try and beat that film to theaters with their own spin. DeepStar Six from director Sean S. Cunningham was one of several rush-to-theater competitors for James Cameron's The Abyss. With a slim budget, this deep-sea creature feature holds up and is tons of fun. Kino Lorber Studio Classics delivers this 80s gem with a solid A/V presentation and an excellent assortment of bonus features. For aqua-schlock fans, this is an essential piece of the collection. Highly Recommended.

President Reagan had star wars for missile defense in the 80s - in the future U.S. missile dominance will come from the bottom of the ocean. With the DeepStar project, the U.S. Navy is building submerged nuclear missile bases on the bottom of the ocean. Captain Laidlaw (Taurean Blacque) and his crew of engineers and scientists are under the gun to get the last missile sled in place or they'll be shut down. When Joyce Collins (Nancy Everhard) is ordered to rush the job and detonate the build site without precautions, a massive deadly creature is unleashed threatening the entire DeepStar base. With air running out and a monstrous creature chowing down on the crew, it becomes a race to the surface - and survival. 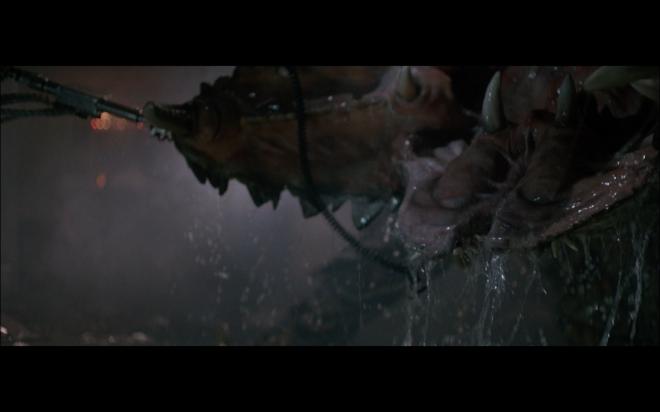 If it wasn't for James Cameron and his aquatic opus The Abyss being a highly publicized tentpole project, we wouldn't have the rush of modest-budget and made-for-cheap imitators. Leviathan, The Rift, and Roger Corman with Lords of the Deep… every studio in town was trying to beat The Abyss at the box office. Carolco masterminds Mario Kassar and Andrew Vajna and Paramount jumped into these murky waters with DeepStar Six. With a strained budget and an unfinished script from writers Lewis Abernathy and Geof Miller, this film moves fast with some impressive visual effects - and others that weren't so convincing. The cast is game and gives it their all and with any Sean S. Cunningham show, when the blood flows it's a gnarly affair.

I've been waiting for DeepStar Six to hit Blu-ray for some time now. As the world awaits The Abyss to finally someday maybe possibly (who knows?) reach Blu-ray and/or 4K UHD, I've made it a point to complete my collection of imitators. DeepStar Six fills a big gap. Watching it through today, the film is one of those happy accidents where the idea all of these studio imitations play so similar they're practically identical. There are beats between Leviathan and DeepStar Six that are practically page-for-page the same. Likewise, there are moments in Lords of the Deep that absolutely ripped off both of those movies while desperately trying to make its creature as benevolent as The Abyss and still offer some kind of horror element. Once the big monster gets into the show, DeepStar quickly becomes Alien meets Friday the 13th with this massive creature hiding in very small spaces but somehow gets the jump on everyone!

Imitation or not, DeepStar Six is a fun one. Maybe not the greatest of the bunch, but I dig it. You can see the cast work their asses off trying to sell this movie. Nancy Everhard is really giving it her all as the obligatory final girl. Nia Peeples gets the arduous task of being the brainy-but-sexy warning alarm and exposition directory when Marius Weyers' Van Gelder makes a risky decision. Elya Baskin is fun as his short-lived Burciaga. Matt McCoy does what he does and slings off the jokes with ease… until he gets into that big dive suit. Then you have a class of actor unto his own, Miguel Ferrer as Snyder who brings his signature jackass intensity while enjoying the best death in the film. It's an underwater monster show, grab a snorkel and dive in! DeepStar Six is worth it.

DeepStar Six gets the Blu-ray love it's long deserved in the U.S. thanks to Kino Lorber Studio Classics in a single-disc release. Pressed on a Region A BD-50 disc, the disc is housed in a standard case with reversible insert art and identical slipcover artwork. The disc loads to a static image main menu with traditional navigation options.

DeepStar Six surfaces with a solid overall presentation. Supplied by StudioCanal, this 1080p 2.35:1 transfer doesn't appear to be from a fresh scan or remaster. There's a tinge of edge enhancement and the grain field has a bit of a noisy appearance to it at times - but as a whole, those are relatively very small gripes to smack the score for. Not having seen this in a few years, I was really impressed with the details. Facial features, costuming, and makeup/gore effects all look great. I was also really impressed with the details in production design, you can see which sets just didn't have a budget and which ones did.

Colors are on point allowing for excellent primary pop. Blues and Reds get a lot of play given the aquatic nature and the amount of blood and guts in this show. Yellows get their pop from the numerous electrical panels. Black levels are pretty good, most of the live actor action on set looks pretty great with deep inky blacks and image depth. Things can get murky and flatten for some of the effects shots - especially when they'd shoot wet for wet with a model in a fish tank. Even with what appears to be some slight edge enhancement, banding isn't an issue, it occasionally gives some lines a crunchy feel. Otherwise, this is a great looking transfer; elements are in great shape without any notable wear and tear.

DeepStar Six enjoys an impressive DTS-HD MA 2.0 mix - that really comes alive if you flip on the DTS Neural:X function of your receiver. If you don't have that option this is a perfectly good stereo track, but the Neural:X does offer some extra punch where it counts during the action and monster beats. Dialog is clean and clear throughout without any issues. There's plenty of mood and atmosphere to the mix, allowing for the various sets to exhibit their own claustrophobic vibe. I love the Harry Manfredini score - it has his feel but is not too much like the extensive work he did for the Friday the 13th series, it's almost like he's trying to ape Goldsmith with the moody interludes before breaking into the horror notes. Levels are spot on without any issue.

When it comes to these fan favorites, Kino Lorber Studio Classics are killing it. This is an impressive collection of archival and newly produced bonus features to keep fans occupied long after you've already watched through the main feature. Ported over is the archival audio commentary with Sean S. Cunningham and visual effects supervisor James Isaac. This is a decent commentary track, but there are long pauses where neither participant says anything at all and you kinda forget you're supposed to be listening to a commentary. The commentary with writers Lewis Abernathy and Geof Miller is a hoot. That is probably one of the funniest commentaries I've listened to in a while and at the same time be very informative. The Isolated Score selections with an audio interview with Harry Hanfredini is pretty good as well, again longer interludes before he says anything but still cool. On top of that, you also get some great cast and crew interviews that are absolutely worth picking through. All in all a robust fun bonus package.

DeepStar Six may not be the greatest creature feature ever, and with its imitation brethren, there are better shows out there - but this is a ton of fun all the same. Sean S. Cunningham did a solid job bringing this creature feature to the screen. Even without a finished script and a short budget, there's a lot of effort to make this feel like a much bigger movie than it is. And when that monster makes its grand entrance, the blood doesn't stop flowing! Kino Lorber Studio Classics serves up DeepStar Six onto Blu-ray with a solid A/V presentation with hours of great new and archival bonus features. If you're tired of waiting for The Abyss to hit a disc format created this century - relive 1989 and dive into DeepStar Six and all of the other great fish flicks that came out around the same time. Highly Recommended