On the dark and forbidding ocean floor, the crew of a deep-sea mission rig discovers a sunken freighter that harbors a deadly secret: a genetic experiment gone horribly wrong. With a storm raging on the surface and no hope of rescue, the captain and his team are propelled into a spine-tingling battle for survival against the ultimate foe - a hideous monster that cannot die...and lives to kill!

Still hot from the success of Paul Verhoeven's 'RoboCop' — pretending 'Shakedown' with Sam Elliott never happened, of course — Peter Weller stars as Steven Beck, a geologist turned captain of a six-month undersea mining operation in 'Leviathan.' In this cult sci-fi horror flick from George P. Cosmatos, helmer of 'Tombstone,' 'Rambo Part II' and another cult favorite 'Cobra,' Weller delivers a surprisingly endearing and weighty character. Not the award-winning sort, but a praiseworthy and engaging performance in a movie that generally lacks originality, providing audiences a reason to endure lots of talking until the suspenseful action-packed finale. Beck is a scientist, first and foremost, a man preferring people to be accountable for themselves and unsure of himself as captain. Yet, we see a steely-eyed commander concealed deep within, which we know he will soon realize once he smells something fishy aboard his ship.

Of course, Weller's understated performance comes at the price of a very conventional story that unabashedly borrows themes and plot points from Ridley Scott's 'Alien' and John Carpenter's 'The Thing.' From a script by David Peoples ('Blade Runner,' 'Unforgiven,' 'Twelve Monkeys') and Jeb Stuart ('Die Hard,' 'The Fugitive'), the film is not necessarily a rip-off as much as it is escapist popcorn entertainment that simply imagines the ideas of those aforementioned classics taking place in the deep sea. Released at a time when underwater adventures were inexplicable popular, such as James Cameron's 'The Abyss' and Sean S. Cunningham's 'DeepStar Six,' the 1989 movie is a satisfying diversion and a fun way to kill time, thanks to Weller and Cosmatos's strong direction. It's nowhere near the excellence of Cameron's award-winning box-office hit, but definitely superior to Cunningham's ultimately forgettable flop. 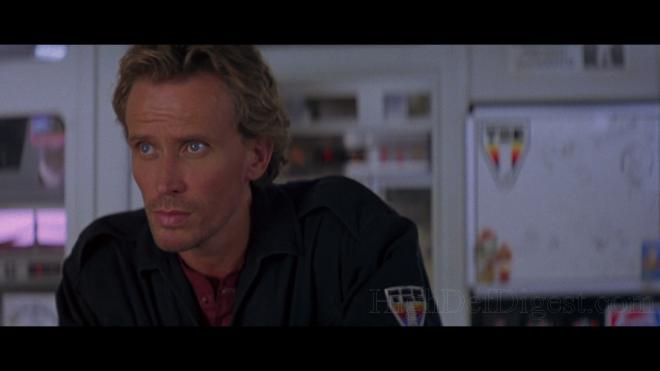 Like Scott's and Carpenter's films, the fear and horror come from the idea that being trapped in isolated, desolate area, far from civilization and the potential of being rescued. The major theme likewise involves a greedy, mostly faceless corporation — save for the remarkable, penetrating, icy-blue eyes of Meg Foster — that places profit above human life. We'd be quick to assume Weller's Beck is a blend of Tom Skerritt's Dallas and Kurt Russell's MacReady, but such is not the case, thankfully. The character is one of the few original highpoints in the production, along with the "genetic alteration" body-horror spectacle that transforms a person into a hideous pre-historic fish monster. In fact, the makeup, mechanical and creature effects by the folks at Stan Winston Studios are another major reason for the film's continued following. Cosmatos smartly delays the ocean beast's debut until the end, focusing more on building suspense, and even then, we're only ever given glimpses, allowing our imagination to run wild.

Richard Crenna also stars as the cynical Dr. Glen Thompson, a man with a shady past who conveniently speaks Russian. Unlike Beck, Thompson comes with the dark moodiness of Kane and the blunt, analytical Ash, yet Crenna makes him a formidable presence. Amanda Pays is our obligatory Ripley, down to her nickname being Willie, though she's hardly comes close to the spirit and boldness of our sci-fi's favorite heroine. Ernie Hudson turns in his ghost-hunting badge and proton pack as the witty, upfront Justin Jones, a more-or-less original character and another genuine highlight. Hector Elizondo, Daniel Stern, Michael Carmine and Lisa Eilbacher (of 'An Officer and a Gentleman' and 'Beverly Hills Cop' fame) are basically copies of the crew from those movies cited. And nevertheless, 'Leviathan' manages to entertain, generating a creepy, suspenseful atmosphere that pays off with an explosive, thrilling finale.

Shout! Factory brings 'Leviathan' to Blu-ray on a Region A locked, BD50 disc housed inside a normal blue case and reversible cover art under the distributor's Scream Factory line. At startup, the disc goes to a generic animated menu screen with options along the bottom and haunting music.

'Leviathan' surfaces on Blu-ray with a terrific and notable AVC-encoded transfer that often shines and blows previous home editions out the water. Admittedly, a couple moments suggest some very mild noise reduction, but thankfully, the majority of the picture isn't ruined if that is the case. The 2.35:1 image offers excellent definition and clarity of the interiors of the deep-sea station, revealing every slimy corner and crevice. Individual hairs are resolute and detailed, the fabric of the clothing shows lifelike textures and facial complexions are quite revealing in close-up. Blacks are rich and true with deep, penetrating shadows that don't engulf the finer details, which is a great for generally dark movie.

However, one nagging concern is a contrast level that sometimes wavers noticeably, looking spot-on and crisp one minute but average and pretty dour the next. Colors are affected somewhat, losing a bit of luster in the primaries and making flesh tones seem rather sickly. Resolution also tends to fluctuate, creating a couple less-than-satisfactory sequences, but overall, the source appears to be in excellent shape, giving fans the best the movie has ever looked with this very pleasing high-def presentation.

As seen in other releases from Shout! Factory, the late-80s creature-feature emerges from the depths with two listening options, one of which this listener prefers over the other. While both are presented in the DTS-HD MA codec, the default soundtrack is a 5.1 upmix that admittedly has a couple benefits, primarily in the surrounds. Since the story is set underwater inside a metal station, expanding the discrete effects is surprisingly welcomed, as they establish fairly creepy atmosphere. However, they are also somewhat locatable and a few decibels too high while the bass is a muddled, loud exaggeration.

On the other hand, the second option is truer to the original stereo design and is just as effective at establishing a moody, eerie soundscape. With excellent channel separation and balance, imaging feels broad and highly engaging with distinct, detailed dynamics and acoustics, as off-screen background activity is convincing and panning is fluid. Dialogue is crisp and well-prioritized as well.

As an experiment, I applied the receiver's internal audio processing decoder, specifically Dolby PLIIx, for the second half of the movie. To my amazement, this upconversion is far superior to what the distributor offers, creating a more convincing and immersive soundfield with better response in the low-end. In either case, the latter track is the overall better option.

A sci-fi horror creature-feature that essentially imagines Ridley Scott's 'Alien' and John Carpenter's 'The Thing' underwater, George P. Cosmatos's 'Leviathan' isn't necessarily a rip-off as much as it is purely fun popcorn escapism. Despite the lack of originality, the cult favorite nonetheless manages to entertain, generating a creepy, suspenseful atmosphere that pays off with an explosive, thrilling finale. The Blu-ray arrives with an excellent audio and video presentation that blows previous home video editions out the water. Supplements are on the light side, but the overall package is sure to satisfy fans and cult collectors.

Sale Price 79.99
Buy Now
3rd Party 74.99
In Stock.
See what people are saying about this story or others
See Comments in Forum
Previous Next
Pre-Orders
Tomorrow's latest releases