An experimental submarine, the "Siren II", with a very experienced crew is sent to find out what happened to the "Siren I", mysteriously disappeared in a submarine rift. Things go awry when they begin to find things that shouldn't be there...

When a studio enters into the high profile development of a unique and exciting property, there are bound to be a parade of low-budget imitators. From Wyatt Earp to Steve Jobs, one studio will strike out to make the definitive film about its subject and each competing film will try to skip to the front of theatrical release line with a less talented cast, a lower budget, and cheaper production values. In 1989, the "it" idea of the hour was James Cameron's underwater submarine-meets-alien sci-fi/melodrama 'The Abyss.' From 'Deep Star Six' to 'Leviathan,' imitators came out of the woodwork aiming to cash in on the concept. One of those flicks was J.P. Simon's 1990 film 'The Rift,' better known to most folks as 'Endless Descent.' While 'The Rift' is a good bit of campy sci-fi monster fun, it's also the cheap cornball 'Jobs' version of the underwater terror concept.

Brilliant submarine designer Wick Hayes (Jack Scalia) is brought out of forced retirement after his state of the art sub The Siren goes missing thousands of feet underwater. In order to figure out what happened, the company that built the submarine along with their NATO counterparts want Wick and a crack crew to board the sister sub the Siren II and find out what happened down there. Under the command of sub Captain Phillips (R. Lee Ermey not Tom Hanks), seamen Rivera (Ely Pouget), Francisco (Luis Lorenzo), and navigator Robbins (Ray Wise), the crew of the Siren II is ready to set sail and find what happened to the Siren I. Making Wick's life a little more uncomfortable is his ex-wife Lt. Nina Crowley (Deborah Adair) has been assigned as the ship's biologist. When they reach part of the Siren I wreckage and a crewman dies as he tries to recover the sub's black box, the crew of the Siren II will unwittingly discover a terrifying conspiracy the government would rather have kept a lid on.

Knock off movies happen all the time. After 'Batman' had a huge box office in 1989, a huge number of comic book films ran through the churn and burn process of Hollywood. Some made it to screens, some didn't, and some have been locked inside a vault ever since they were made and will never get an official release. 'The Rift' is the best sort of cheap imitation filmmaking. It's budget - or lack of - is apparent in every frame of the film. The Siren I and it's counterpart the Siren II look like repurposed Yellow Submarine toys for kids. The underwater effects are hilariously silly looking as the ship maneuvers in ways that break every law of physics. When the monsters show up they look like the latex is fresh out of the oven as the paint has barely even dried. Through it all, this cast is completely committed to making the best of this situation. If their conviction had let up even in the slightest bit, the whole thing would have become an unbearable bore. 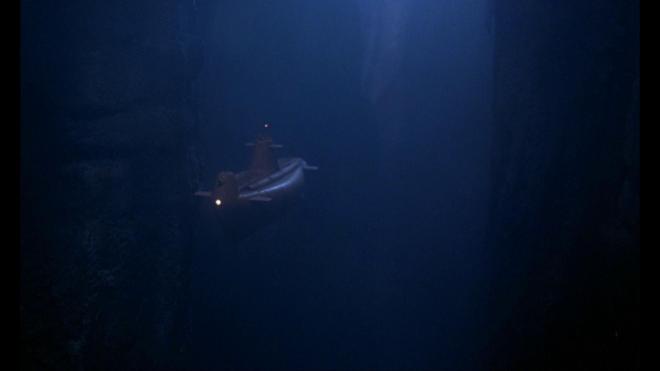 At the tip top of this cheese fest is Jack Scalia as the dashing, muscley, and mulleted Wick Hayes. It may be beating a dead horse to say that there is nothing at all believable about Scalia playing a brilliant submarine designer, but it's true. He's all sorts of wrong for that sort of role and yet, his earnestness carries the movie. He always appears as a man in control of the scene - even if he's turned up the overacting to 11. Second in command of this little opus is the legendary R. Lee Ermey. You've got to love that man. He was in some genuinely bad movies but he always acted the professional - especially if he was a playing some sort of military man. In 'The Rift,' Ermey is right at home barking orders and giving people the steely stare with his bushy eyebrows. It's all the better that he plays things so straight when you realize he's playing someone in command of a submarine that has a drop ceiling with acoustical tiles and mood lights. Then you come to another genre vet Ray Wise. Wise' Robbins character is a pretty obvious on-the-nose individual. I won't spoil things here but within a couple of scenes you've got him figured out and Wise's casting is perfect - even if he would go on to starring in much better projects down the line.

With the cast out of the way, we arrive at the real reason to see this flick, the oozy gooey underwater creatures! At a time when environmentalism was on everyone's mind, it shouldn't come as any surprise the origin for our gigantic brained creatures with vaginal mouths and sharp teeth who like to leap out of cave walls and eat people is some sort of experiment gone wrong. By the time these little 'Alien' knock off critters enter the scene, you can feel the filmmakers just throwing ideas at the screen. Everything from genetic manipulation to radiation to chemical contamination and corporate greed is tossed up as an explanation for what is going on. But whenever a reason is given, 'The Rift' forces you to take a moment and actually think about the plot - which you really shouldn't do. The fact that there is no sense in a genetic testing facility being installed into a cave nearly 40,000 feet under water is perfectly fine with me, I didn't really need an explanation why it was there, but god bless screenwriter David Coleman for feeling the audience needed to know.

At the end of the day, 'The Rift' is a stupid, silly little knock off of 'The Abyss.' That said, it's got a big heart and always tries to be entertaining. Whether the movie is trying to creep you out with the grotesque monsters or impress you with its baking soda powered visual effects or with its comically rampant sexism, 'The Rift' will at least keep you entertained. Which is more than can be said for a lot of movies if you think about it. Whether you're laughing at 'The Rift' or with it, you're going to have a great time. It's the perfect movie for a room full of friends, some good pizza, and a couple of ice cold brews. I didn't expect to enjoy this movie as much as I did, but damn if it wasn't a ton of fun.

'The Rift' arrives on Blu-ray courtesy of Kino Lorber and Scorpion Releasing. Pressed onto a Region A BD25 disc, the disc is housed in a standard Blu-ray case and has reversible artwork; one side depicting the current title, the other side depicting the original VHS box art and retitled 'Endless Descent.' The disc opens directly to a static image main menu with traditional navigation options.

Considering this film's poor reputation as a VHS tape mainstay, the new HD master provided for 'The Rift' looks surprisingly good. In all honesty, I was expecting a soupy mess without any clarity and definition, but there is a surprising amount of both throughout this 1.67:1 1080p presentation. That said, it's not perfect. There are some softness issues that at times can make the image look like a high-quality DVD while other scenes can look like a fresh film scan with all the HD trimmings. It's all dependent on the color scheme of the scene in question. The underwater special effects sequences are soft and lose depth. The scenes on the Siren II bridge are bathed in blue lighting and appear to have been run through some filters as they too can appear soft and lose some depth. Scenes with full lighting look fantastic and allow you to appreciate the dated hairstyles as well as the cheap production values. On the plus side of things, film grain is readily apparent throughout without any signs of DNR. Some scratches and slight speckles are apparent here and there, but nothing too severe. All around this is a pretty great looking transfer for a goofy looking movie.

The English DTS-HD MA 2.0 audio track is a case of "the best it can be." It sounds fine, the dialogue comes through crystal clear, but it also has that Italian canned quality to it since very nearly every single word was dubbed or looped in post-production. Often times this can lead to a baked in rubber mouth effect as the dialogue can continue long after the person has finished speaking. Sound effects are similarly canned with a very hollow sound to them -  but indicative of their source and not a fault of the mix itself. Atmospherics are effective as this is a very damp sounding movie with a lot of icky-squishy audio effects throughout. Levels are also set well, sometimes the noise of an action scene can drown out a bit of the dialogue, but what's being said is never so important that you should feel the need to adjust your volume to compensate. The track is free of any age-related hiss or wear and tear. All around a fine audio track with a goofy touch that fits the nature of the film.

Ray Wise Interview: (HD 24:12) You've gotta hand it to the man for being professional. Even all these years later you can see the man not wanting to speak badly about his casemates or the filming conditions. Even though he doesn't say it outright, it feels like a bit of bait and switch happened here as it sounds like he was told this movie would be one thing and ended up being something else. He's a good egg though and gives credit where it's due.

Jack Scalia Interview: (HD 31:05) Scalia has a lot of fun bits and pieces to offer. He goes into a lot of detail about meeting with Dino DeLaurentiis and being immediately cast for the film. It certainly sounds like it was a fun shoot if maybe not the wisest career move he ever made.

R. Lee Ermey Interview: (HD 7:26) Leave it to Ermey to tell it like it is. The man makes no bones about his absolute hatred for this film, the director, the budget, and especially his fellow cast members. It's a shame it's such a short interview because he's a hoot.

Lovers of schlock science fiction films rejoice! 'The Rift' is a classic imitator with all the low budget trappings that make it a classic. The film is never a dull moment and everyone watching with you should be cheering by the end. Kino Lorber brings this early late 80s early 90s romp to Blu-ray in fine order with a better than expected A/V presentation and some halfway decent bonus materials. Film fans who like their movies entertaining and more than a little on the silly side should absolutely consider a purchase, everyone else, give it a look.

Sale Price 74.99
Buy Now
3rd Party 74.99
In Stock.
See what people are saying about this story or others
See Comments in Forum
Previous Next
Pre-Orders
Tomorrow's latest releases