One man and his robot pals are trapped on a satellite and are subjected to the most heinous torture devices ever conceived - the worst movies ever made! Mystery Science Theater 3000 is back for Season 12: The Gauntlet. The new cast and crew of the SOL are on a much stronger footing this season. With more experience comes better timing, jokes, and some truly classic episodes! Shout Factory delivers all six episodes on three Blu-ray discs with stellar A/V presentations allowing you to fully appreciate every riff and sight gag. Your MST3k collection isn't complete without it. Recommended.

"It's like having two Uncle Joey's in one movie!"

Given that I own every single episode on DVD and have copies of the episodes that aren't likely to ever be released, I am an MST3k fan through and through. Given my longtime love of the show as I mentioned in my review for Season 11 - I readily admit that I'm an apologist as well. Season 11 wasn't the flawless return most folks probably had hoped for - but it was far and away from a disaster. It was a new cast and crew, new writers, and they just needed time to get their feet under their legs. 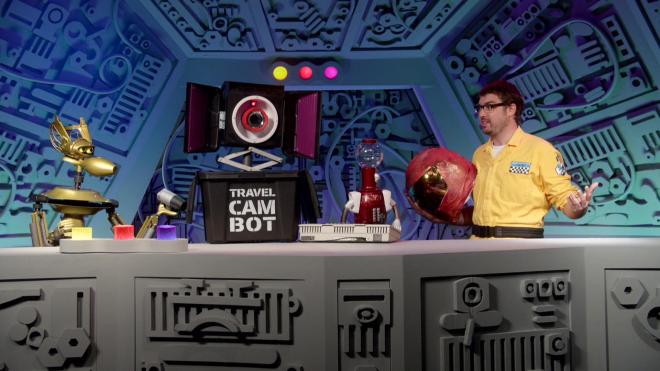 Thankfully, Season 12: The Gauntlet is a marked improvement. Leaning into their home channel of Netflix, the through-line this season is that poor Jonah and the Bots aren't just subjected to one movie. No. They're getting six back-to-back features! Obviously we don't have to binge each episode that way but it's a fun wink and nod to the show's new home that wasn't present in the last season.

There is also new confidence this season that was a bit lacking last time around. There aren't any goofy cameos, the Mads Felicia Day and Patton Oswalt have appreciatively dialed it up to 11 while Jonah Ray feels much more at home with the part of hapless captive human while Hampton Yount's Crow and Baron Vaughn's Tom Servo edge into capturing their own versions of the iconic robot pals. If Joel was the Father to the bots and Mike the little brother, Jonah feels more like an indifferent slacker cousin. He doesn't like being kidnapped in space, but it's not like he had a hell of a lot else going on? It's fun energy that really clicked this season.

The flicks thoroughly skewered this season are:

Truthfully this whole season is a gas. Mac and Me and Lords of the Deep are instant classic MST3k episodes. Since this season was unleashed my wife and I have watched these two episodes countless times. Ator: The Fighting Eagle is a nice throwback for those who remember the early Joel years with the episode "Cave Dwellers" which was actually this film's sequel. The only "iffy" episode was Atlantic Rim and that's only because it was a piece of low hanging fruit. It's funny as hell but given this is an Asylum release, this isn't something difficult to kick around. But if "easy" is the only complaint I have about one single episode - that ain't bad at all. If you haven't binged it on Netflix already Mystery Science Theater 3000 Season 12: The Gauntlet is a riot. Even if you've already dug through the whole thing, your MST3k home collection isn't complete without it!

Shout Factory kidnaps Mystery Science Theater 3000 Season 12: The Gauntlet onto Blu-ray in a three-disc set. Pressed onto three Region A BD-50 discs, the discs are housed in a standard sturdy 3-disc case; each disc gets its own tray and are not stacked on top of one another. The discs load to static image main menus allowing you to choose which episode you want to watch. Once you select an episode, it starts right up without any other submenu.

Just like Season 11, Season 12: The Gauntlet is subject to the source elements for each episode. The host segments look great with that brand new sparkling digital HD image quality. The movies themselves can be a bit of a mixed bag depending on the film. Overall - each episode looks great offering strong details, bold colors, and a nice sense of depth to the image. I was most surprised by Lords of the Deep. I remember renting this one on tape as a kid and the improvements are notable! For a cheap The Abyss knockoff from the Roger Corman movie machine, there's a lot to see and admire in the set design, costumes, and creature effects. Fortunately, that means there's plenty to laugh at as well! Given the larger budget, Mac and Me is the one that probably comes out looking the best, but even that one is subject to some iffy visual effects work. All in all the whole season looks great and I appreciate that the main features weren't altered or cropped as they were in MST3k's original television run.

Depending on the feature film in question, each episode of Season 12: The Gauntlet enjoys either a DTS-HD MA 2.0 or 5.1 mix. The host segments are uniform giving a nice surround presence for the moments we get to enjoy the cast outside of the theater setting. The films get to maintain their best possible audio presentation. Atlantic Rim, Mac and Me, Lords of the Deep all have strong prominent audio mixes that allow the cast to riff away at dialogue exchanges and sound effects.

What's particularly nice this time around is the pacing of the jokes. Season 11 - as funny as hell as it was - was too tempted to fire off as many jokes as they could as fast as they could which lead into so some lost dialogue exchanges or dashed punchlines. The writing this season is much sharper and better timed so the jokes land harder allowing you time to laugh before another quick jab flies off. Again, the audio quality of the films is subject to their elements. If there was hiss in the mix, as was slightly apparent with The Day Time Ended and Ator: The Fighting Eagle, no attempt was made to cover it up or alter it. It's just there. Even still there's nothing to complain about since you're likely going to be laughing your way through most of those moments where you would even hear any kind of hiss or pop in the audio mix.

Sadly there aren't any bonus features in this set. Previous DVD set releases included some great material about the making of the actual movies or some extra stuff from the MST3k cast and crew. I wish some bonus features had made it here, but that's not the case.

Now with two seasons since its return, Mystery Science Theater 3000 is still hilarious and this new cast and crew is on better footing. Fingers crossed the 13th season is on the horizon because this was a uniformly solid season. Like any season of the show, there are stronger episodes than others, but this was a damn funny season from start to finish - whether you binged it in one go or not.

Shout Factory! unleashes Season 12: The Gauntlet in a three-disc Blu-ray set with solid A/V presentations for each episode. Sadly no bonus features this go around. Regardless this is six feature-length episodes of pure hilarity. If you've been collecting the sets thus far - you've got one more for your collection. Recommended.

Sale Price 47.99
List Price 59.97
Buy Now
3rd Party 32.49
In Stock.
See what people are saying about this story or others
See Comments in Forum
Previous Next
Pre-Orders
Tomorrow's latest releases