Lonely Are the Brave

An intimate, deeply affecting, and beautifully produced and performed western, Lonely Are the Brave stands as both Kirk Douglas' favorite film and a resonant tale of one man's inability to adapt to a changing world. Excellent supporting work from Gena Rowlands, Walter Matthau, George Kennedy, and Carroll O'Connor enhance this involving, location-shot drama, but it's Douglas who carries the day with a stirring, heartbreaking portrayal. First-rate video and audio transfers and a few absorbing supplements distinguish Kino's Blu-ray presentation, which revitalizes this classic character study and comes highly recommended.

Westerns remain one of the most beloved film genres because they evoke a sense of wistful nostalgia for simpler times when right and wrong and good and evil were easier to define and we admired and emulated heroic qualities. The rugged cowboy stands as a symbol of American freedom and the possibilities that await intrepid explorers courageous enough to venture into the unknown and push the frontier's boundaries. What happens, though, when we reach the end of that frontier and progress begins to crowd out the iconic cowboy and render him a relic of a bygone era? What happens when the wide-open spaces shrink and an automobile replaces a horse as man's vehicle of choice?

No film depicts the encroachment of contemporary life on a stubborn, starry-eyed cowboy and the shifting attitudes shaping America's modern West better than Lonely Are the Brave. Director David Miller's thoughtful, moving, and exciting drama beautifully captures a pivotal time and place and the myriad emotions ripping apart Jack Burns (Kirk Douglas) as he clings to a credo that no longer applies and a world that no longer exists. A literate script by Dalton Trumbo, sincere performances from a top-notch cast, stunning location photography, and potent themes all combine to produce a stirring motion picture that touches our hearts and sticks to our ribs.

"Don't Fence Me In" would be a fitting theme song for Jack, a drifter and loner who flies by the seat of his pants on the saddle of his beloved horse Whiskey. His mantra? "Do what you want to do and to hell with everybody else." So far, that's worked for Jack, but the walls begin to close in on him when he rides into Albuquerque to look up his old flame Jerry (Gena Rowlands), whose husband Paul Bondi (Michael Kane), Jack's dearest friend, recently landed in prison for shielding and aiding a group of illegal Mexican immigrants. Sparks still fly between Jack and Jerry, but she's frustrated by his dogged independence, lingering immaturity, and unwillingness to adapt to modern society. "Either you go by the rules or you lose," she tells him. "You lose everything." 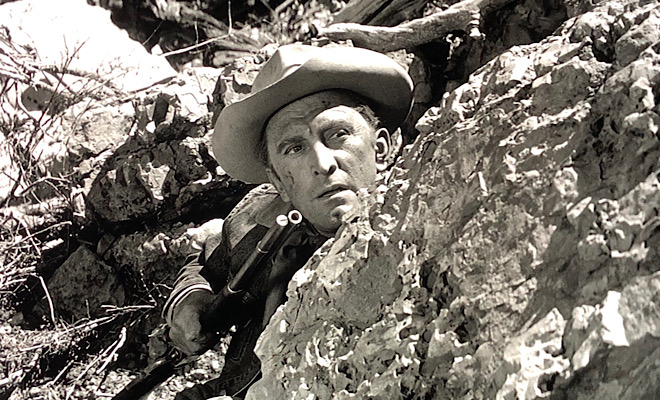 Jack aims to bust Paul out of the brink, but to engineer a jailbreak he has to get himself arrested first. After a bruising barroom brawl with a belligerent one-armed local (Bill Raisch, who would later play the famed One-Armed Man on The Fugitive TV series), Jack gets his wish, but finds Paul is no longer the free-spirited, rebellious man he once knew. Now a husband and father, Paul embraces his responsibilities, rues his prior mistakes, and vows to serve out his sentence and return to his family. Jack respects Paul's decision, but decides to escape anyway, believing if he and Whiskey can just make it over the Sandia Mountains, he'll have a straight shot to Mexico, where he can live his life unbound and on his own primitive terms.

And so begins an arduous journey fraught with danger. It's Jack and Whiskey versus a police posse led by Sheriff Morley Johnson (Walter Matthau) and his sadistic deputy Gutierrez (George Kennedy). Yet unlike the western showdowns of yore, this one features helicopters, jeeps, and radio communication. With the deck stacked against him, can a determined Jack evade the encroaching net and vanquish the modern world? That's a tall task for one man and one horse, but like the name of so many saloons across the Old West, this is Jack's last chance and he's going to give it his all.

Just as Lonely Are the Brave bridges the gap between traditional and modern westerns, Miller's film also bridges the gap between the old and new Hollywoods with its bold style and progressive ideas juxtaposed against black-and-white photography and a narrative with plenty of well-worn western themes. The fantastic location scenes shot on the treacherous slopes of the Sandia Mountains enhance the contemporary feel while heightening the sense of urgency swirling around Jack and Whiskey.

Speaking of Whiskey, it's rare when the character we care about most in a film is a horse, but the relationship between Jack and Whiskey is so intimate, we view them almost as a couple. Jack's Herculean efforts to get Whiskey up to the mountain's crest keep us on the edge of our seats as we fear for the safety of both our hero and his loyal steed. Some of the moments are literally heart-stopping, and Miller, who hadn't made an action flick since the John Wayne aerial epic Flying Tigers two decades earlier, proves he's just as adept helming physical sequences as he is filming nuanced character dialogues. 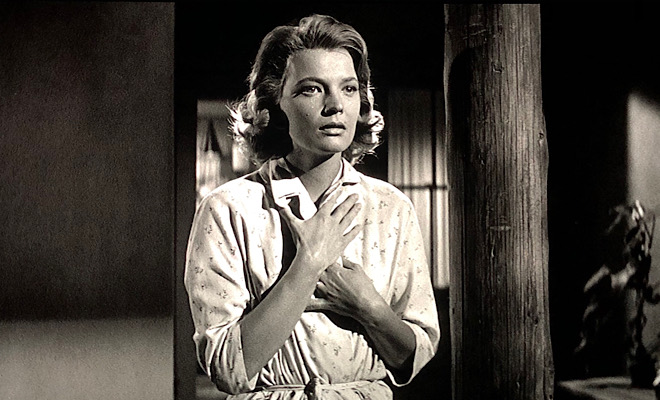 Douglas may have clashed with Miller on the set, but you'd never know it from his understated, natural portrayal. With a lack of guile and deep understanding of his character, Douglas embodies Jack's impulsive nature, devil-may-care attitude, and boyish charm. So often, Douglas is loud, impassioned, and bursting with angst, but here he's more low-key and introspective. Instead of a raging boil, his performance gently simmers, and it's much more effective and moving as a result. He also creates marvelous chemistry with the luminous Rowlands, who shines in only her second feature film role. Not many leading ladies could go toe-to-toe with Douglas (maybe that's why Burt Lancaster was his most frequent co-star), but Rowlands does, and her authentic work adds essential warmth to this cynical tale.

When I was a kid, Walter Matthau was already firmly ensconced in comedies, so it took me a while to discover what a fine dramatic actor he was early in his career. It's been a privilege to savor some of those serious performances in A Face in the Crowd, Fail Safe, and Mirage on recently released Blu-rays, and Matthau's work in Lonely Are the Brave is equally good. As the nonplussed, level-headed sheriff who pursues Jack with a mixture of frustration and admiration, he exudes a sardonic cool that nicely offsets George Kennedy's more menacing deputy. In one of his first big-screen roles, Kennedy makes an instant impression as he eerily evokes Ernest Borgnine's sinister turn as Fatso in From Here to Eternity, while a couple of future TV icons, Carroll O'Connor and Bill Bixby, both of whom had little prior feature film experience, also assert themselves well.

Much like its flawed yet noble hero, Lonely Are the Brave never quite gets the respect it deserves. In the annals of great western films, it's often left out, possibly because it refuses to be constricted by the genre's rigid rules. In that way, too, it resembles Jack Burns, and that's exactly why this melancholy yet majestic film is so endearing and enduring. 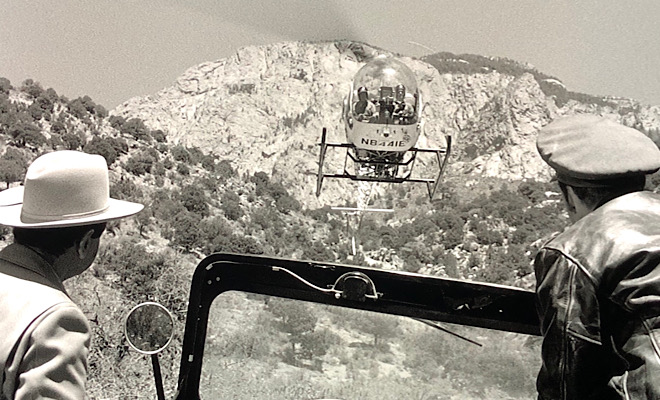 Lonely Are the Brave arrives on Blu-ray packaged in a standard case. Video codec is 1080p/AVC MPEG-4 and audio is DTS-HD Master Audio 2.0 mono. Once the disc is inserted into the player, the static menu without music immediately pops up; no previews or promos precede it.

Lonely Are the Brave was remastered for its 2009 DVD release, and it seems Kino used the same source material for this 1080p/AVC MPEG-4 transfer. That's good news, because the film looks vibrant, rich, and wonderfully crisp on Blu-ray. The naturalistic cinematography of two-time Oscar nominee Philip Lathrop captures the rugged beauty of the mountain landscapes and immerses us in the intimate action. A pleasing grain structure preserves the film-like feel and provides essential texture for the dusty outdoor drama, and excellent contrast and clarity brings all the details into brilliant focus.

Sometimes exterior location photography can look a tad overexposed, but the grayscale is in perfect balance here. We can feel the harsh glare of the New Mexico sun, but it never blows out the image. Rich black levels, pleasing whites, and good shadow delineation provide extra punch, while super-sharp close-ups showcase Douglas' sun-baked skin and the sweat, grime, and stubble that often cover it, as well as Rowlands' fresh-faced loveliness. Only a few errant specks dot the practically pristine print, and no digital anomalies could be detected.

This is a great transfer of a beloved film that will please long-time fans and first-timers alike.

The DTS-HD Master Audio 2.0 mono track supplies clear, well-modulated, often robust sound. Sonic accents are most impressive and really bring the action to life. The whirring blades of a helicopter, honking horns on roadways, loose rocks and gravel cascading down the mountain face, driving rain, and gunfire are all well defined, while subtler atmospherics supply essential shadings to the drama. Though there's no designated bass track, low-ends tends are prominent and provide wonderful weight to the mix, and a wide dynamic scale embraces Jerry Goldsmith's majestic score. All the dialogue is easy to comprehend, distortion is absent, and no age-related hiss, pops, or crackle intrude. It's too bad Lonely Are the Brave wasn't recorded in stereo (a wide, separated soundscape would enhance the narrative even more), but this is quite a good mono track, and the lossless treatment adds a bit of extra oomph.

Kino imports all the extras from the 2009 DVD release and adds a new audio commentary and the film's original trailer to produce a substantive supplemental package.

Kirk Douglas cites Lonely Are the Brave as his favorite film, and though director David Miller's poetic, often exciting, character-driven western lacks the name recognition of Spartacus and Lust for Life, it stands as an understated, beautifully shot, and deeply emotional film that provides the iconic actor with a tailor-made role. The story of a stubborn cowboy who struggles to come to terms with the evolving modern world doesn't always ring true, but its themes, performances, and pitch-perfect direction resonate. Excellent video and audio transfers as well as a few absorbing supplements distinguish Kino's Blu-ray presentation, which honors this quiet and affecting movie with style and grace. Highly Recommended.