Capt. Jim Gordon's command of the famed American mercenary fighter group in China is complicated by the recruitment of an old friend who is a reckless hotshot.

Taking place just before the attack on Pearl Harbor, John Wayne's Academy Award-nominated war film, 'Flying Tigers,' was released in theaters in October 1942, less than a year after the shocking military strike by the Imperial Japanese Navy in December 1941. As such, the film, about a group of pilots whose mission it was to defend China against the encroaching Japanese forces, was as much a recognition of military heroism prior to U.S. involvement in World War II, as it was a sobering acknowledgement of a date which will live in infamy.

Often referred to as mercenaries – largely because the group was privately contracted by the military – the Flying Tigers of the film are a tight-knit collection of highly skilled pilots headed up by the ever-stalwart John Wayne, as Capt. Jim Gordon (no relation to Gotham City's legendary commissioner). Gordon and most of his men see their job as a duty, something they're obliged to use their skills for until (and if) the U.S. is officially involved in the war. That resolve is tested, however, after Gordon brings in hotshot pilot Woody Jason (John Carroll) to replace a longtime Tiger whose deteriorating eyesight winds up grounding him. As the group's missions become gradually more perilous – including several patrols flown at night – Woody's cockiness gets him into hot water with the rest of the men, especially after he's accused of putting his personal glory before the safety of his fellow pilots.

This leaves Gordon in the unenviable position of being torn between his duty as a captain, and his loyalty to a friend. The situation is worsened dramatically when Woody fails to report for duty on time, leading to the death of one of his fellow pilots and, much worse, the fact that he was out on a date with nurse Brooke Elliot (Anna Lee), who has been on the verge of something serious with Gordon for some time. The event is eye opening for all three, as Woody's irresponsibility creates a seemingly irreconcilable schism between himself and the rest of the group, while Gordon comes under fire for failing to wrangle in his unpredictable pilot. Slightly less damning is Gordon's realization that he has serious feelings for Brooke as he nearly lost her to Woody's recklessness as well. 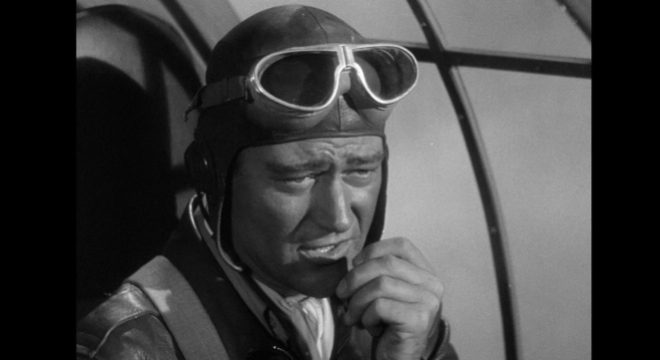 'Flying Tigers' is undeniably a product of its times. A flag-waver of the highest degree, the film is unapologetically patriotic, a fact that, with the combined participation of John Wayne, most certainly contributed to the film's success and approval from American audiences. And in that regard, the movie becomes something altogether different: A response to an event that led to the dramatic escalation of the Second World War. In that regard, director David Miller's little black-and-white picture about mercenaries already engaged in conflict with the Japanese ostensibly became something of a propaganda film – albeit one with considerable crossover appeal thanks to its above-the-title star.

Looking back, 'Flying Tigers' was less concerned with the drama of its characters than it was the character of its characters. The story is light, to say the least, something of a meandering melodrama that hinged on the inevitability of the attack on Pearl Harbor. But that narrative allowed for an (at the time) intriguing comparison of the notions of honor and duty, courage and heroism, and, most overtly, the idea of sacrificing one's self for the good of the whole. Gordon's willingness to engage in a dangerous and potentially suicidal mission that will give the Chinese and the mercenaries of the Flying Tigers a much-needed early victory is underlined by Woody's insistence that he be a part of it, despite having had his proverbial wings clipped as a result of his reckless, selfish behavior.

As though a portent of things to come, Miller places heavy emphasis on a soldier's willingness to place himself in harm's way, and depicts that throughout the film through some surprisingly thrilling dogfight sequences. With its use of stock footage (which calls to mind the brilliance of Stuart Cooper's use of stock footage in 'Overlord') and incredibly accurate models, the fight scenes convey a certain sense of realism that no doubt contributed to the film's success. That action is quite necessary, however, as the film's script is about as thin and ineffective as can be – demonstrating how reliant 'Flying Tigers' was on the benefit that comes from sentiment and the war that was no doubt on everyone's mind.

Wayne is charming in his role, if somewhat hollow, which, frankly is an issue across the board. Even John Carroll's boisterousness and cocksure attitude offers little in the way of an actual character, let alone something for an actor to sink his teeth into. Much of that also has to do with the pacing of the story, which struggles to find a balance between the camaraderie of the men, Gordon's on-again, off-again romance with Brooke, and, most of all, the conflict that Woody Jason represents.

But despite its makeshift script and thin characterizations, 'Flying Tigers' was serving a completely different purpose. In the end, the film will likely be better regarded for its unabashed pro-war stance and for the swiftness with which it was produced and released following the attack on Pearl Harbor, than for actually being a good film. Pictures with such an agenda rarely result in a terrific end product, and that is certainly evident here. Still, 72 years after its initial release, the film manages to be entertaining for completely different reasons. 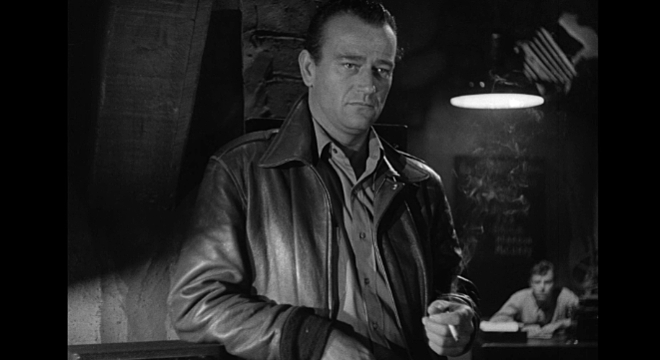 'Flying Tigers' comes from Olive Films as a single 25GB Blu-ray disc in the standard keepcase. Like all Olive releases, there are no previews or supplemental features. This is the movie and only the movie.

'Flying Tigers' is presented in a very clear 1080p AVC/MPEG-4 encoded transfer that delivers an image that is consistently detailed. The picture shows a surprising amount of facial detail and even texture in close-ups – which make the dogfight sequences look particularly nice – while wider shots still maintain a certain level of clarity, but detail tends to drop off to certain extent. Ironically, the only real problem with clarity in the image also comes during the dogfight sequences, where the footage of aerial battles is overwhelmed with grain and, in some cases, is scratched or otherwise damaged. While that give the shot itself a more authentic look, it is incongruent with the rest of the image's clean, crisp presentation.

Additionally, contrast levels are quite high, producing an impressive gray scale that handles many shades between the blackest blacks and the whitest whites. In that regard, black levels are quite rich and robust, without a hint of crush or banding present. Some shots can tend to look a little hot, or washed out, but the infraction here is nominal.

Overall, this is very nice looking disc that will please fans of the film.

The DTS HD Master Audio 1.0 track is probably at its deepest when presenting Victor Young's rousing score. Those moments resonate with a rich, deep sound that, when necessary, is balanced quite well with other elements such as dialogue and sound effects. The result, then, is a film that plays up its cinematic qualities, by encouraging the audience to have an emotional response from the musical score.

Elsewhere, the dialogue is presented cleanly, though plainly. Voices are easily heard, but they can sometimes sound a bit flat. Sound effects, too, come across as a little unexciting, as even the dogfights are marked by sounds that are somewhat hollow and ineffective. While this is unfortunate in terms of the film's presentation of the action that is at the heart of its reason for being, it thankfully is not further hampered by any scratches, clicks, or unevenness in tone.

In the end, this is an adequate track that gets the sound across, but does little to help make it more exciting.

'Flying Tigers' does not contain any special features.

'Flying Tigers' isn't quite the rousing war film that would come after World War II, but its purpose is still much the same. Wayne is fine in prototypical hero mode, but he and the rest of the cast have little to work with in terms of characterization or emotionality. The film is often too intent on getting across the notion of selfless heroism to focus on what that kind of sacrifice actually means to the character at hand, but perhaps it can be forgiven some, considering that isn't exactly the intent of anyone involved in the movie's production. With a very nice image, adequate sound, this will be attractive to John Wayne and war film fans, but for everyone else, it's probably just worth a look.