A Face in the Crowd - Criterion Collection

A blistering, cynical, yet oh-so-prescient look at how television and advertising brainwash the masses, A Face in the Crowd remains as relevant today as it was more than six decades ago. Director Elia Kazan and writer Budd Schulberg don’t pull any punches in their depiction of an egomaniacal demagogue who hoodwinks the public and bulldozes anyone who blocks his path to the top. A brand new transfer, great audio, and a few potent supplements make this Criterion edition a keeper. Highly Recommended.

Television. It’s the perfect platform for a demagogue and, while the medium was still in its infancy way back in the mid-1950s, writer Budd Schulberg and director Elia Kazan were smart enough to recognize what a powerful and dangerous tool TV could - and would - become. A Face in the Crowd, the duo’s razor-sharp satire about an ignorant nobody whose TV success transforms him into a dubious national phenomenon, was the first motion picture to explore the dark side of that seemingly innocuous black box sitting in everyone’s living room. Before the term was coined, the film exposed the nefarious potential of this “boob tube” that could hypnotize, brainwash, and numb the noggins of a porous public eager to soak up whatever it spews like a sponge.

As one of the characters firmly pronounces, “In TV, we have the greatest instrument for mass persuasion in the history of the world.” That’s quite a statement for 1957, but boy-oh-boy was he right! Yet when the industry forms an unholy alliance with advertising and politics, ethics go out the window, commercialism reigns supreme, and the ability to shape and alter America’s social landscape in the blink of an eye becomes the sexy drug of choice. Savvy, unscrupulous operators like Senator Joseph McCarthy, provocative talk show host Morton Downey, Jr., and even our current president, Donald Trump, hopped on the bandwagon and embraced TV’s intoxicating aura. Soon they were masterfully manipulating the medium like puppeteers, influencing their followers like cult leaders, and perfectly realizing the dire warnings so presciently preached in A Face in the Crowd.

When scrappy, ambitious radio producer Marcia Jeffries (Patricia Neal) brings a microphone into a Northern Arkansas jail in the hope of finding some authentic material, little does she know a grumpy, down-on-his-luck drunkard named Larry Rhodes (Andy Griffith) will be her ticket to the big time. Larry‘s honey-toned singing voice and homespun demeanor make him an instant hit on the local airwaves, and after Marcia nicknames him “Lonesome,” his star really starts to rise. “I put my whole self into everything I do,” Lonesome says, and he ain’t kidding. His plain-spoken style and penchant for going off script and making audacious remarks (hmmm, who does that sound like?) draw fans to him like flies to honey, and before long television comes calling.

That’s when Madison Avenue gets involved, too, quickly transforming Lonesome into a priceless commodity. As his ratings skyrocket, fueled by an easily fooled, willingly duped, and frighteningly loyal public, Lonesome’s head inflates like a hot air balloon, betraying his innate arrogance, narcissism, diabolical nature, and disdain for his fellow man. “I’m not just an entertainer,” he crows. “I’m an influence, a wielder of opinion, a FORCE!” Like someone who dominates social media today, it's all about Lonesome, and his palpable charisma allows him to seduce anything and anyone he touches. That includes Marcia, who’s smart enough to know better, yet still finds herself bewitched by his spirit and beholden to his bankability, despite his glaring character flaws. Like Frankenstein’s monster, she created him, but he just might destroy her.

So-called reality TV wasn’t yet a thing in 1957, but live TV certainly was, and its inherent unpredictability proved to be fertile ground for magnetic, brazen personalities like Lonesome. With keen perception, he exploits the medium and flips it to his advantage, beefing up his image and using his bully pulpit to spout his unique brand of bullshit. Initially, it’s harmless palaver, but when politicians seek his input in order to cast his patented spell over their constituents, the game adopts a serious and disturbing angle. 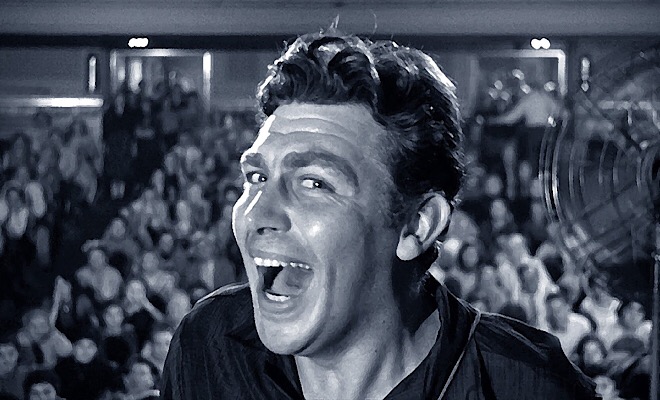 Both Kazan and Schulberg had their troubles with the House UnAmerican Activities Committee in the early 1950s and both notoriously and controversially named names, a decision that forever stained their respective reputations. Their greatest collaboration, the Oscar-winning On the Waterfront, explores the nature of snitching on one’s associates, while A Face in the Crowd, their follow-up film, confronts the forces that create demagogues who wreak havoc on society as they promote their extreme agendas. The movies form a potent one-two punch as they lay bare the nasty underbelly of American culture and draw stark parallels to McCarthyism. Here, as it did in On the Waterfront, Schulberg’s biting, literate script beautifully complements Kazan’s raw, in-your-face direction to produce a riveting, richly textured portrait of ego, greed, manipulation, and exploitation. The two men not only skewer television, but also advertising and the image-driven world of politics, and though the satire may not be revelatory in this advanced day and age, it’s shocking how little has changed and how markedly the climate has deteriorated since the movie’s release more than six decades ago. And the fact that Schulberg and Kazan could foresee it all boggles the mind.

In a role that’s a far cry from Andy Taylor, the iconic small-town sheriff he played for years on his eponymous TV sitcom, Griffith dazzles, crafting an electric, no-holds-barred portrayal that embraces every repugnant element of Lonesome’s character. His sparkling eyes, full-throated laugh, and toothy grin mask the insatiable ambition and immorality simmering in Lonesome’s soul, and Griffith maximizes them to fashion a larger-than-life, completely repugnant persona. Unbelievably - and criminally - he wasn’t nominated for an Oscar, and adding insult to injury, the film’s box office failure effectively quashed Griffith’s subsequent movie career.

Neal is a force of nature as well, filing an organic, nuanced performance. Marcia buoys and enables Lonesome and remains loyal to him despite his increasingly shoddy treatment of her. Though she‘s quick to acknowledge his massive shortcomings and hates how he behaves, she can’t bring herself to cut the ties that bind them. It’s a tricky part, but Neal navigates the treacherous minefield well, exhibiting myriad emotions without overplaying her hand.

History has proven A Face in the Crowd to be not only timeless but also surprisingly timely. Is it a coincidence America elected a former reality TV star president of the United States 60 years after its release? Or was it an inevitability? Kazan and Schulberg would certainly say it’s the latter, and after watching this fascinating film, I’d have to agree. The two men lay out their case so cogently, it’s impossible not to be swayed by it. Sadly, new generations of Americans keep falling for old tricks, and until we finally get wise, we’ll continue to be hoodwinked by self-promoting rabble-rousers.

At its core, A Face in the Crowd shows how easily the masses can be manipulated by a powerful medium, and how anyone with a magnetic personality and gift of gab - no matter their level of education, socio-economic status, or personal history - can become a revered figure and hijack the hearts and minds of an entire nation. As long as TV and the internet exist - and an army of celebrity wannabes relentlessly clamor for attention - Kazan’s insightful film will remain relevant and more than a little frightening. A Face in the Crowd is a cautionary tale of the highest order, but given the nature and direction of our culture, it’s doubtful its warnings will ever be heeded. 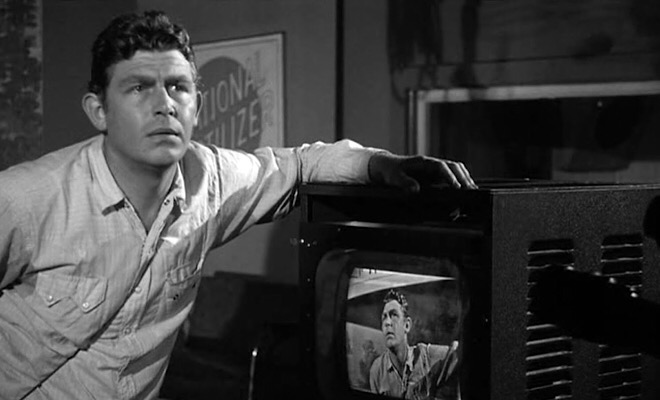 A Face in the Crowd arrives on Blu-ray packaged in a standard Criterion case. A 32-page booklet featuring three essays (one by Elia Kazan himself), a number of black-and-white scene stills, a cast and crew listing, and transfer notes is tucked inside the front cover. The video codec is 1080p/AVC MPEG-4 and the audio is LPCM mono. Once the disc is inserted into the player, the static menu with music immediately pops up; no previews or promos precede it.

According to the liner notes, the stunning, brand new 1080p/AVC MPEG-4 transfer “was created in 4K resolution...from the 35 mm original camera negative.” Superior contrast, clarity, and gray scale variance distinguish this high-quality rendering that also features crisp close-ups and excellent shadow delineation. Light grain lends the image a distinct film-like feel, while rich black levels complement the story’s dark, cynical elements. Transitions are occasionally a bit ragged and a few scenes appear slightly soft, but no nicks, marks, or scratches mar the pristine source material. This is another beautiful effort from Criterion that enhances the impact of this searing classic.

The LPCM mono track supplies clear, well-modulated sound without any age-related hiss, pops, or crackle. A wide dynamic scale handles all the highs and lows of the music score without a hint of distortion, and all the dialogue is easy to comprehend.

The supplemental package is a bit skimpy, but the quality of the material is top-notch. A film like A Face in the Crowd cries out for an audio commentary, but alas, Criterion does not include one.

Searing, prescient, and bitingly cynical, A Face in the Crowd plays better today than it did back in 1957. This brilliant portrait of a down-and-out bum who’s magically transformed into an arrogant demagogue by the power of both television and advertising shows just gullible American society can be, and how little it has changed over the past six decades. Criterion honors this timeless - and still timely - classic with a glorious new transfer, excellent audio, and a few informative supplements. A Face in the Crowd is another terrific motion picture from director Elia Kazan and writer Budd Schulberg, and it comes very highly recommended.

Sale Price 19.84
List Price 39.95
Buy Now
3rd Party 19.84
In Stock.
See what people are saying about this story or others
See Comments in Forum
Previous Next
Pre-Orders
Tomorrow's latest releases