When you think of legendary director David Lean, The Sound Barrier doesn't immediately spring to mind, but this little-known aviation drama from the man who brought us Lawrence of Arabia and The Bridge on the River Kwai remains a standout entry in his distinguished film canon. Packed with spectacle and tension, yet wonderfully intimate, this not-so-historically-accurate chronicle of a British aircraft magnate's obsession with breaking the sound barrier includes thrilling flight sequences, Oscar-winning sound, and top-notch performances from Ralph Richardson, Ann Todd, and Nigel Patrick. An excellent video transfer and appropriately potent audio enhance Kino's Blu-ray presentation, which comes highly recommended.

"What exactly does happen to an aeroplane at the speed of sound?"

That's the central question propelling director David Lean's little-known but impeccably crafted aviation drama The Sound Barrier. But before you go dismissing this 1952 film as a dry, technical account of flight innovation, scientific vision, and man's obsession with forging a new aerial frontier, you need to see it, because only then will you discover how richly textured and achingly human this underrated movie is.

Lean, of course, remains one of cinema's most revered and towering figures, but unless you're a scholar of the director's work, you may not be familiar with the handful of films he made between his early masterpieces like Brief Encounter and Great Expectations and his later legendary epics like The Bridge on the River Kwai, Lawrence of Arabia, and Doctor Zhivago. The Sound Barrier falls smack in the middle of those two groups and stands as a prime example of Lean's artistic development during a transitional stage of his career. Like the characters in the film, Lean pushes boundaries and widens his scope, and the thrills the movie provides stem as much from his talent as from the dramatic material.

First things first. The Sound Barrier is not historically accurate. Contrary to what Lean and screenwriter Terence Rattigan would like us to believe, the British did not win the race to break the sound barrier. If you've seen The Right Stuff, you know the Americans in general and Chuck Yeager in particular accomplished that noteworthy feat with very little fanfare in 1947 (a British pilot did it a year later), yet even such an intentional and glaring inaccuracy doesn't diminish the movie's entertainment value. 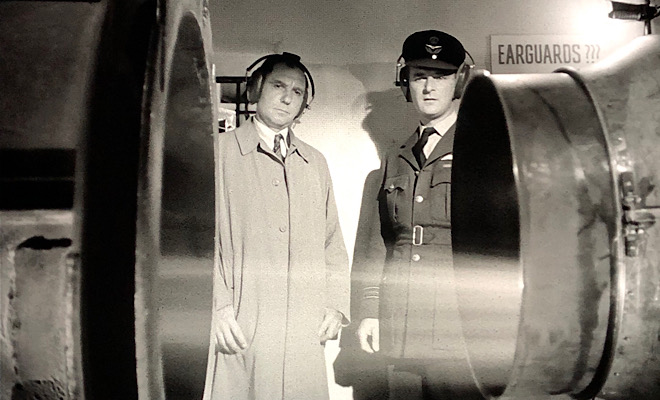 The Sound Barrier not only chronicles how an aircraft manufacturer successfully engineers a plane that can travel faster than the speed of sound, it examines the why behind the obsessive will to do so, as well as the effect of such all-consuming and dangerous work on those involved. John (J.R.) Ridgefield (Ralph Richardson), a dour, driven, and emotionally reserved magnate, runs a cutting-edge factory specializing in jet engine technology, and cares more about aviation than he does about his two grown children, Susan (Ann Todd) and Christopher (Denholm Elliott). J.R. resents Susan because she wasn't born a boy, and he's disappointed in Christopher because he doesn't possess a shred of the affinity or aptitude for flying that defines the family name.

When Susan marries war hero Tony Garthwaite (Nigel Patrick), he becomes J.R.'s chief test pilot, and his risky missions make Susan resent her father all the more. As the company inches ever closer to constructing an engine that can exceed Mach 1 and a plane that can withstand the enormous pressure of crashing through the sound barrier, tensions between all the principals reach a fever pitch. Breaking the sound barrier will be a monumental accomplishment, but it might leave a broken family in its wake.

The Sound Barrier often calls to mind the classic 1938 Clark Gable-Spencer Tracy flick Test Pilot as it depicts the courage, dedication, and selflessness of a rare breed of men who risk life and limb every time they take to the skies. The film provides great spectacle, with thrilling aerial scenes and a bit of travelogue, but it backs up those visuals with an absorbing human story filled with dimensional characters we care about. That's what brings the film down to earth and makes it resonate. Terence Rattigan, one of England's finest playwrights who dabbled in screenwriting from time to time (moviegoers know him best for The Prince and the Showgirl and Separate Tables), received an Oscar nomination for his nuanced script that subtly examines both family and marital dynamics while still leaving plenty of room for action. 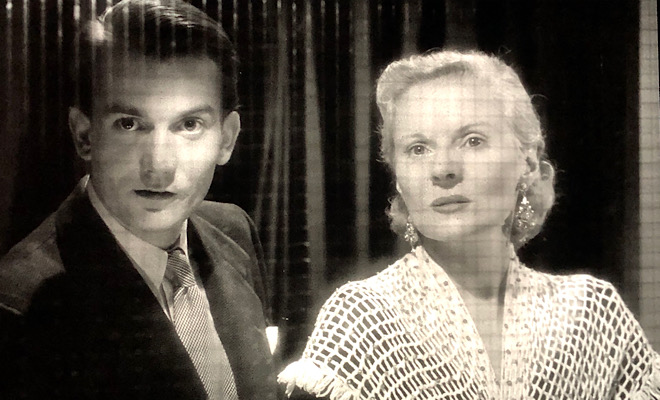 Lean puts us right in the cockpit for many shots and filmed pilot John Derry - the first British pilot to break the sound barrier - performing aerial feats for long shots. He also juxtaposes tranquil silences with the bombastic whoosh of overhead jet engines to brilliant effect. Not surprisingly, The Sound Barrier won the Oscar for Best Sound Recording, and the excellent audio (see review below) makes us rue the fact the film was released before the dawn of stereophonic - let alone Atmos - sound.

Over the past year, we've been treated to a lot of Ralph Richardson on Blu-ray - The Heiress, The Holly and the Ivy, Outcast of the Islands, and now The Sound Barrier. All four films were made within a three-year period and provide a fascinating look at the acclaimed actor's versatility. No one plays stern, reserved, manipulative, and judgmental men quite like Richardson, and here he combines those qualities with a passionate desire to make history and send his pilots where no pilots have gone before. That powerful conviction drives a wedge between J.R. and his family, spawns plenty of drama, and makes Richardson, once again, an imposing screen presence.

Women are often afterthoughts and ornaments in this type of film, but in many ways, Ann Todd is The Sound Barrier's central character and emotional core. She was also Lean's wife at the time (they were married from 1949 to 1957) and starred in his two previous productions, The Passionate Friends and Madeleine. Todd is a terrific actress (you may remember her as Gregory Peck's wife in Hitchcock's The Paradine Case) and she brings warmth, grit, and plenty of British stiff-upper-lip to a deceptively complex role. Nigel Patrick and John Justin assert themselves well, and a young, dashingly handsome Denholm Elliott makes a notable impression in only his second feature film.

The Sound Barrier is an unsung David Lean film that deserves to be rediscovered and appreciated anew. It showcases the director's technical strengths while giving Lean and his fine cast a meaty story into which they can sink their teeth. The history may be suspect, but everything else about this exciting and absorbing movie is undeniably authentic. 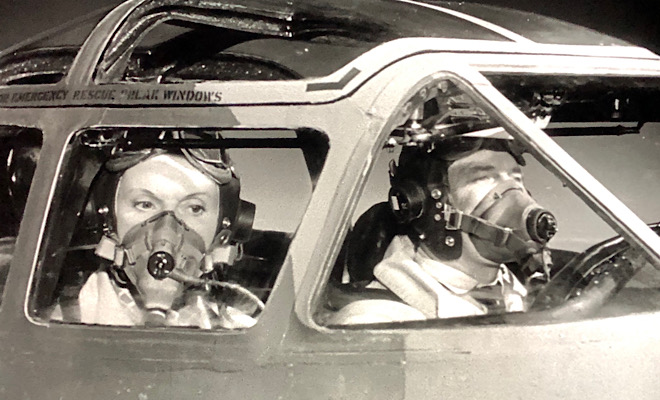 The Sound Barrier arrives on Blu-ray packaged in a standard case. Video codec is 1080p/AVC MPEG-4 and audio is DTS-HD Master Audio mono. Once the disc is inserted into the player, the static menu with music immediately pops up; no previews or promos precede it.

This high-quality 1080p/AVC MPEG-4 transfer uses a 2018 British Film Institute restoration as its source, and the result is a gorgeous rendering that honors the superb cinematography of Jack Hildyard, who would win an Oscar a few years later for his work on Lean's The Bridge on the River Kwai. Grain is evident, but it supplies necessary texture as well as a glorious film-like feel, and excellent contrast, clarity, and grayscale produce a vibrant, immersive image. Blacks are lush, whites run a tad hot, shadow delineation is good, and processed shots are largely seamless. Close-ups beautifully showcase the expressive faces of all the actors, but especially Richardson and Todd, and the aerial sequences exude a surprising amount of fine detail. Some nicks and scratches dot the print from time to time, but rarely break the spell, and no instability or digital anomalies intrude. Though The Sound Barrier can never rival the visual splendor of Lean's later epics, it remains a thrilling visual spectacle, and it's never looked better than it does here.

The Sound Barrier won an Oscar for Best Sound Recording, and this excellent DTS-HD Master Audio mono track shows us why. One can only imagine how great this film would sound with a Dolby Atmos mix, but since that's just a pipe dream, this single-channel track must suffice. And suffice it most certainly does, often going above and beyond expectations with fantastic fidelity during the flight sequences, potent bass, and well-balanced audio overall. The whirs, hisses, and squeals of the jet engines as the planes cut through the air assault the senses (in a good way) and fill the room with powerful roars, while subtle ambient effects like chirping birds and crisp accents like footsteps nicely complement the bombastic aerial tones. The wide dynamic scale handles all the ear-splitting noise - as well as the highs and lows of the robust music score by Malcolm Arnold - without a hint of distortion, all the dialogue is easy to comprehend, and no age-related pops or crackle disrupt the tranquil and, at times, eerie silences.

Mono audio will never live up to its multi-channel counterparts, but this track comes closer than most to closing the gaping gap between them. If you turn it up loud (and I recommend you do), it will give your system a good workout.

The Sound Barrier is probably one of the few David Lean films you've never heard of, but it's time you did. Though this thrilling aviation drama often gets lost amid Lean's Noel Coward collaborations, Dickens adaptations, and grandiose epics, it stands on its own as an expertly crafted, visually stimulating, and emotionally satisfying motion picture. Take the history with a grain of salt, but don't let it spoil the movie's many attributes - a substantive, Oscar-nominated script, classy performances by Ralph Richardson, Ann Todd, and Nigel Patrick, superior aerial sequences, Oscar-winning sound, and Lean's understated artistry. Kino's top-flight Blu-ray presentation features a marvelous video transfer, soaring audio, and a couple of supplements, all of which elevate this absorbing, tense, and oft-neglected British film. Highly Recommended.