The Holly and the Ivy

A fractured family comes to terms in The Holly and the Ivy, a cozy British Christmas drama about a widowed country parson struggling to reconnect with his troubled adult children. Such esteemed English actors as Ralph Richardson, Celia Johnson, Margaret Leighton, and Denholm Elliott bring the touching tale to life and infuse it with warmth, sincerity, and plenty of seasonal spirit. Kino's Blu-ray presentation won't knock your socks off, but it nicely honors this under-appreciated, little-known holiday film that deserves to be rediscovered. Recommended.

Mention a British Christmas and that irascible old miser Ebenezer Scrooge immediately springs to mind. Though Charles Dickens' cantankerous curmudgeon may be England's undisputed holiday poster boy, our friends across the pond have produced other memorable Christmas characters and films over the years. Most lack Scrooge's notoriety and struggle to emerge from his enormous shadow, yet fit the cozy, quaint American vision of what an English Christmas should be like.

The Holly and the Ivy is one such movie. Unless you're a British film aficionado you probably haven't heard of it, but it's time you did. Director George More O'Ferrall's quiet drama about a dysfunctional family trying to make amends one snowy Christmas Eve hits all the heartwarming notes you'd expect from a yuletide movie, but with a minimum of fuss and even less manipulation. The engrossing, accessible story doesn't break any new ground, but the fairly predictable narrative - fueled by dimensional characters and punctuated by a few tense confrontations - ambles amiably along. The Brits are famous for their stiff upper lips, so it's no surprise the emotional tone is restrained and understated, which lends The Holly and the Ivy an authenticity most Christmas movies lack. And despite having a central character who's a minister, the film is blessedly bereft of preaching.

For decades, benevolent country parson Martin Gregory (Ralph Richardson) has conscientiously presided over his parish in a moral, upstanding manner. The recently widowed, dedicated, somewhat doddering reverend lives with his oldest daughter, Jenny (Celia Johnson), who feels so obligated to care for her aging father she turns down the marriage proposal of her engineer boyfriend David (John Gregson) and the chance to accompany him on his upcoming five-year assignment to Brazil. David begs Jenny not to sacrifice her life by becoming a nursemaid, but her sense of duty overrides her deep love for David. As Christmas preparations intensify, Jenny's fun-loving brother Michael (Denholm Elliott) arrives home on a military furlough, but Jenny's sister Margaret (Margaret Leighton), a successful London fashion journalist and the family's proverbial black sheep, remains conspicuously absent.

Just in time for Christmas Eve dinner, however, Margaret appears, but her agitated demeanor sets in motion a cavalcade of family confessions and showdowns that disrupts the festive Christmas atmosphere and rips the scabs off deep-seeded and still painful emotional wounds. The stoic, oblivious Martin has always put his parish before his family, and his children's fear of disappointing him by exposing their frailties and failing to live up to his lofty standards has distanced them from him emotionally. Whether the rifts can be repaired remains to be seen. 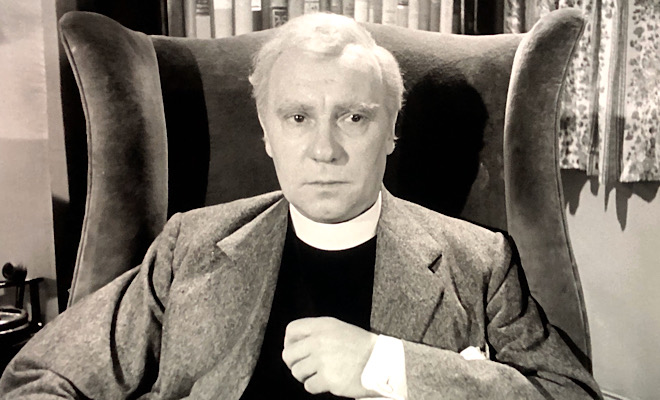 Fraught family gatherings have always been popular holiday movie fodder because they're so relatable. No matter how close a brood might be, squabbles inevitably occur, and The Holly and the Ivy does a better job than most Christmas films in believably depicting the tangled dynamics. Screenwriter Anatole de Grunwald sprinkles in a good deal of humor to offset all the angst, while O'Ferrall wisely keeps an intimate focus on his esteemed actors, all of whom elevate the rather pedestrian material.

Richardson, one of the world's finest actors, seems a bit young for his role, but nevertheless fully embodies the moralistic minister who struggles to understand his children. Just listening to his mellifluous voice recite dialogue is a treat, as is watching his emotional transformation as the film progresses. The young Elliott, whom we all remember best as Marcus Brody in the Indiana Jones movies, files a strong, passionate performance, as does the beautiful Leighton, who would achieve her greatest success on the stage, winning two Best Actress Tony Awards for Terence Rattigan's Separate Tables and Tennessee Williams' The Night of the Iguana. (It's a shame Leighton was not chosen to reprise those roles in the respective movie versions.)

The heart of The Holly and the Ivy, however, belongs to Celia Johnson, one of Britain's best film actresses and a particular favorite of mine. Her wonderfully nuanced, Oscar-nominated work in Noel Coward's classic 1945 romance Brief Encounter is unforgettable, but Johnson always projects a beautiful radiance that belies her rather plain appearance. Sincerity and naturalness emanate from her core and she brings to The Holly and the Ivy a quiet strength and profound tenderness that heighten both our involvement in the drama and emotional response to it. Unlike Richardson, the 43-year-old Johnson is too old to play the 31-year-old Jenny, but somehow she makes it work. It's more difficult to accept her as Richardson's daughter, considering Johnson is just six years his junior.

The Holly and the Ivy isn't the best Christmas movie ever made, but it's a charming curio that deserves an occasional spin. The heartfelt performances and simple, affecting story complement the spirit of the season and reinforce the blessings of family we far too often take for granted. So maybe give Scrooge a rest this year and let this overlooked British gem warm your soul instead. 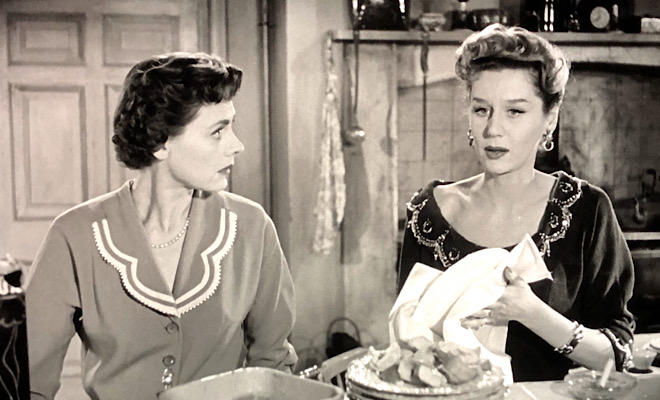 The Holly and the Ivy arrives on Blu-ray packaged in a standard case. Video codec is 1080p/AVC MPEG-4 and audio is DTS-HD Master Audio 2.0 mono. Once the disc is inserted into the player, the static menu with music immediately pops up; no previews or promos precede it.

Kino's vibrant, crisp 1080p/AVC MPEG-4 transfer exudes a lovely sheen. Excellent contrast and clarity complement the British locations and intimate interiors, while a natural grain structure maintains the feel of celluloid without overwhelming the image. Easy-to-discern background elements and detailed fabric textures heighten visual impact, and sharp close-ups render fine facial features well. Black levels are rich and deep, whites are bright, and all the grays in between are nicely varied. Some print damage, a bit of instability, a missing frame, and a reel change marker disrupt the presentation from time to time, but never enough to break the film's dramatic spell. Though a full restoration would have been a welcome Christmas present, this is still a solid transfer that will please classic movie fans.

The DTS-HD Master Audio 2.0 mono track supplies clear, if somewhat hollow, sound. Though no age-related hiss, pops, or crackle intrude, there's an annoying faint whirring sound that consistently underscores the action, ruining pregnant pauses and quiet moments. A wide dynamic scale embraces all the highs and lows of Malcolm Arnold's festive music score (performed by the Royal Philharmonic Orchestra) without a hint of distortion, but occasionally the swelling strings become a bit too prominent. Dialogue, however, is always well modulated. In other films, authentic British accents can make some exchanges difficult for Americans to understand, but all the actors here enunciate so well, we don't miss a word. Though some fine tuning could certainly improve this track, it's good enough as is.

The only supplement is an astute and amiable audio commentary by film historian Jeremy Arnold, who ably mixes analysis with background information on the actors and some personal observations. Though The Holly and the Ivy isn't particularly meaty from either a thematic or production standpoint, Arnold manages to sustain his discussion and keep the listener involved. If you're a fan of the film, you'll find his remarks informative and interesting.

A few trailers for other holiday-themed Kino releases are also included on the disc, but not one for The Holly and the Ivy.

A Christmas Carol may be the most famous British holiday movie, but The Holly and the Ivy proves there's more to an English Christmas than Ebenezer Scrooge. This tender, well-acted family drama deftly mixes emotional angst with Yuletide cheer and the result is a lovely trifle that's a welcome departure from tried-and-true holiday fare. Kino's Blu-ray presentation features solid, but not stunning, video and audio and an engaging commentary track. Though The Holly and the Ivy may not make it onto your annual Christmas playlist, this charming British film definitely deserves a spin every so often and comes heartily recommended.