Outcast of the Islands

After a tidal wave of critical and popular acclaim washed over The Fallen Idol and The Third Man (two of the finest British movies ever made), director Carol Reed threw caution to the wind and set sail in a totally different cinematic direction. He announced his next project would be an adaptation of Joseph Conrad's 1896 South Seas novel An Outcast of the Islands, and much like the story's arrogant, headstrong protagonist, Reed boldly ventured into uncharted waters to produce another ambitious and arresting film.

Conrad can be a tough nut to crack. Just ask director Francis Ford Coppola. The author specializes in chronicling culture clashes and power struggles between white colonialists and native peoples, and famously uses the river as a metaphor for man's descent into madness and despair in his most acclaimed book, Heart of Darkness, which Coppola brilliantly incorporates into his psychedelic Vietnam War epic Apocalypse Now. Elements of Heart of Darkness permeate An Outcast of the Islands, which was written three years earlier, and Reed's engrossing screen adaptation makes a fine companion piece - or prologue - to Coppola's film.

Outcast of the Islands (Reed would drop the title's initial article) can't quite equal either The Third Man or The Fallen Idol, but it remains a fascinating and captivating picture that sadly has never received its proper due. The stirring story, literate script, stunning cinematography, a quartet of legendary English actors (Ralph Richardson, Trevor Howard, Robert Morley, and Wendy Hiller), and Reed's assured direction combine to create a film that satisfies on multiple levels. A few rough spots occasionally rock the boat, but Reed quickly rights his cinematic vessel and steers it back on course, hurtling his well-drawn characters headlong toward a memorable climax. 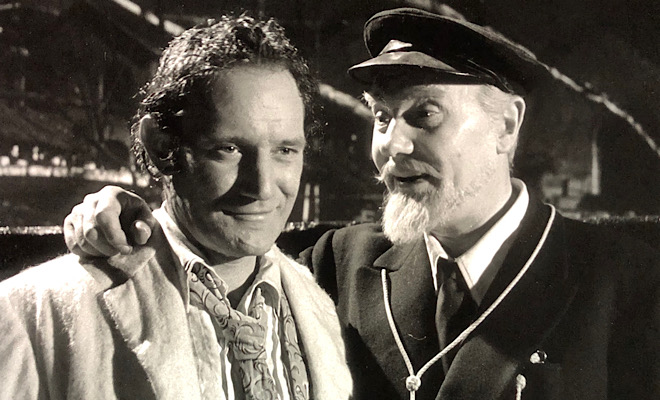 The story plumbs the depths and darkness of the human spirit as it chronicles the devious dealings, sensual desires, and selfish actions of charming rapscallion Peter Willems (Howard), who's caught with his hand in the proverbial cookie jar while managing an import business near Singapore. His embezzlements spur his dismissal, but before the police can arrest Willems for his misdeeds, his old friend and sponsor Capt. Tom Lingard (Richardson) grants him sanctuary on his ship, which is headed up an uncharted, treacherous channel to a primitive island trading post where Willems can safely hide.

Because the gruff, shrewd Lingard is the only seaman who can navigate the tricky waters leading to the remote colony, he can most efficiently transport the natives' goods to the Singapore market. The mutually beneficial arrangement has worked for years. Lingard's stodgy, fastidious son-in-law Elmer Almayer (Morley) oversees the operation and lives on the island with his prim, repressed wife (Hiller) and their spoiled young daughter (Annabel Morley). He also deftly finesses the tricky relationship with the natives to maintain community harmony.

Willems' arrival, however, threatens to upset that delicate balance. Lingard wants the two men to be partners, but because Elmer views the cocky, rugged Willems as a potential rival, he only assigns him menial tasks. As the saying goes, "idle hands are the devil's workshop," so it's not long before Willems stirs up trouble, first by brazenly pursuing Aissa (Kerima), the seductive daughter of the native chief, then by becoming a driving force in the natives' attempt to dump Lingard and secure a more lucrative outlet for their goods. Like the tropical sun, both sexual and social tensions quickly heat up, then wreak havoc, and lead to a dramatic showdown. 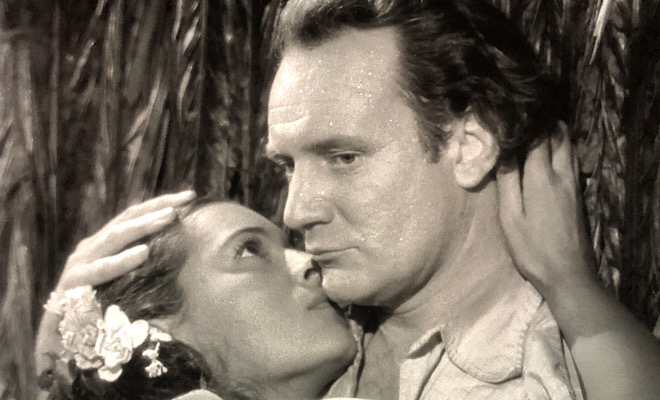 The setting plays a major role in this study of temptation and corruption, so Reed's decision to shoot the bulk of Outcast of the Islands on location in Ceylon (now Sri Lanka) was a wise one. The exotic atmosphere and native actors heighten the movie's immediacy and enhance its tropical flavor while overshadowing some unfortunate choices, such as putting British actor George Coulouris in dark makeup to play the tribal spokesperson Babalatchi and using rear-screen projection in an abundance of close shots. Those decisions badly date the movie, but the story and its themes remain timeless.

Willems is without a doubt one of the most irredeemable characters in all of cinema. Devoid of a moral center, selfish to the core, and lacking empathy or sensitivity, he indulges every impulse and takes advantage of every situation. Yet even as he hurts others and hoists himself on his own petard, Willems exudes a rascally charm that makes him fascinating to watch, and in a performance that ranks among his very best, Howard embraces every aspect of his complex character. Whether dressed as a dandy or dirty and disheveled, he commands the screen and brings authenticity to a difficult role.

Richardson, in his first film since The Heiress two years before, is always a powerful presence, so it's a shame he only appears in the opening and closing sequences. Morley, who would go from Ceylon to the Belgian Congo to appear in John Huston's The African Queen the same year, files a typically colorful portrayal, and it's a treat to see him interact with his real-life five-year-old daughter Annabel, who quite brilliantly plays his bratty child in the movie.

Hiller has a relatively small part, but as always, makes the most of it, supplying some much needed emotional warmth to a largely cold-blooded film, while Kerima, a French actress in her film debut, makes a stunning impression as the native temptress. Much like Gale Sondergaard in The Letter, Kerima doesn't utter a word of dialogue, yet her smoldering glares and voluptuous movements speak volumes and thicken the air of mystery and ambiguity swirling about the film.

If Outcast of the Islands falls short, it's not due to a lack of commitment from its director. Reed throws himself into the production and presents an absorbing, provocative, and resonant tale with a marvelous mixture of lyrical artistry and natural grit. Though his higher profile productions (the Oscar-winning musical Oliver! chief among them) may have eclipsed Outcast of the Islands over the years, hopefully its Blu-ray release will revive interest in this underrated gem of a film. 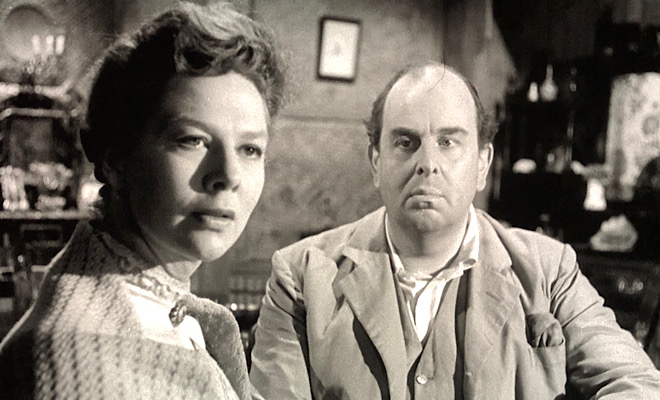 Outcast of the Islands arrives on Blu-ray packaged in a standard case. Video codec is 1080p/AVC MPEG-4 and audio is DTS-HD Master Audio 1.0. Once the disc is inserted into the player, the static menu with music immediately pops up; no previews or promos precede it.

A few notable hiccups notwithstanding, Kino provides a very nice 1080p/AVC MPEG-4 transfer that faithfully honors the location cinematography of Edward Scaife and John Wilcox. Grain levels fluctuate and some incidents of softness occasionally intrude, but the overall presentation flaunts a lovely film-like feel. Close-ups are abundant and often striking, with fine details like sweat, pores, facial hair, and sun-wrinkled skin rendered well. Some of the exterior shots look overly bright, but most are marvelously balanced, thanks to a nicely varied grayscale that also enhances depth. Black levels are rich and inky, day-for-night shots look great, a couple of glorious silhouettes grab attention, and costume textures come through well. Print damage is evident, with nicks and scratches consistently dotting the source material, but they never overwhelm the picture.

Sadly, the enhanced clarity calls even greater attention to the abundance of poorly executed process shots that are intercut with the beautiful location photography. The result is a jarring, sloppy mess that diminishes the film's native flavor, takes us out of the action, and calls attention to moviemaking mechanics. None of this is the fault of the transfer, which accurately reflects the film's deficiencies, but it's worth noting because it does impact the visual experience.

The DTS-HD Master Audio mono track supplies clear, well-modulated sound. The climactic storm sequence is especially impressive, with booming thunder and driving tropical rain producing a profound sonic presence. Subtle atmospherics enhance the exotic atmosphere and a wide dynamic scale showcases the highs and lows of Brian Easdale's music without any distortion. (Easdale won an Oscar a few years earlier for his score for The Red Shoes.) All the dialogue is easy to comprehend and no age-related hiss, pops, or crackle intrude. A film like Outcast of the Islands would benefit greatly from multi-channel audio, but this solid transfer makes the most of its mono track.

In addition to a few trailers for other classic British movies released by Kino (sadly, no preview for Outcast of the Islands is included), film historian and critic Peter Tonguette provides a ho-hum audio commentary that never achieves the degree of depth film buffs like me crave. Tonguette begins by praising Carol Reed, defending the director's reputation, and stating Outcast of the Islands is "every inch" the equal of Reed's previous masterpieces, The Fallen Idol and The Third Man. He continues by revealing Orson Welles was originally slated to play Trevor Howard's part and felt betrayed when he didn't ultimately get the role. Tonguette then launches into a long monologue about Welles that has very little to do with the film at hand. While he does provide background information on selected members of the cast and crew, praises the black-and-white cinematography, and shares critical reaction to the movie, he provides very little analysis of the plot and characters, virtually no production information, and only fleetingly mentions the source novel and its esteemed author Joseph Conrad. I'm always interested in how faithful a screen adaptation is to the original novel upon which it is based - what's been embellished, what's been deleted, how do the characters differ - but none of that is included here. As a cursory discussion, this commentary is fine, but its lack of depth makes it a time-waster for true classic film fans.

Outcast of the Islands may not be one of Carol Reed's most famous films, but this riveting adaptation of Joseph Conrad's novel definitely stands as one of the high points of the acclaimed director's career. A strong cast, literate script, and dazzling location photography enhance this tale of an unscrupulous opportunist who becomes the victim of his own desires. Though extras are slim, a lovely video transfer and solid audio distinguish Kino's Blu-ray presentation that fittingly honors one of Great Britain's most underrated movies. Highly Recommended.