After a chance meeting on a train platform, a married doctor (Trevor Howard) and a suburban housewife (Celia Johnson) enter into a muted but passionate, and ultimately doomed, love affair. With its evocatively fog-enshrouded setting, swooning Rachmaninoff score, and pair of remarkable performances (Johnson was nominated for an Oscar for her role), this film, directed by David Lean and based on Noël Coward’s play Still Life deftly explores the thrill, pain, and tenderness of an illicit romance, and has influenced many a cinematic brief encounter since its release.

Back in 2012, Criterion released a handsome box set containing four movies directed by a young David Lean, years before he helmed such epic masterpieces as 'The Bridge on the River Kwai,' 'Lawrence of Arabia,' and 'Doctor Zhivago.' All four were adapted from material written by Noel Coward, and were produced at the height of World War II between 1942 and 1945. The collection, simply titled 'David Lean Directs Noel Coward,' showcases Lean's burgeoning talents in a variety of genres, but its undisputed crowned jewel is 'Brief Encounter,' the heartbreaking love story that catapulted Lean into the upper echelon of motion picture directors.

Now, at last, 'Brief Encounter' is available as a stand-alone release. Although I highly recommend the box set for fans of Lean, Coward, and high-quality British films, Criterion has rightly recognized the elevated appeal of 'Brief Encounter' and set this exceptional feature apart from its trio of cinematic cousins. Intimate, restrained, and brimming with repressed passion, the film never ceases to strike an emotional chord, despite its unwavering - and typically British - stiff upper lip. Morality and the principles governing love and marriage have certainly evolved since the movie was released, but Lean ably captures the period's prevailing attitudes and depicts them with sensitivity and insight.

'Brief Encounter' is the culmination of the Coward-Lean partnership that began with 'In Which We Serve' and continued through 'This Happy Breed' and 'Blithe Spirit.' It's a beautiful star-crossed romance distinguished by an exquisite script (adapted from a Coward play), understated tone, perfectly modulated performances, and the graceful artistry that would hereafter become a Lean staple. Intelligent and refreshingly adult, the movie weaves a hypnotic spell as it tells the tale of two upstanding people (both married) who meet by chance in the tea room of a railway station, develop a casual rapport, and soon find themselves swept up in an unexpected, unwanted, and doomed affair. Rarely has a film explored the spiritual side of love with such tenderness and perception, and so successfully exuded the debilitating ache of unfulfilled longing.

Trevor Howard and Celia Johnson play the illicit lovers who share stolen, infrequent moments in a variety of dreary settings, and they are both magnificent. Johnson, as the suburban wife who's caught off guard by her growing attraction to a man she barely knows, won the prestigious New York Film Critics award for her natural, restrained performance, and was also nominated for a Best Actress Oscar. Howard, in his first leading role, complements her well, displaying a mix of quiet strength and delicate warmth that's utterly believable.

A scene in which he arranges a tryst with Johnson in a buddy's flat reportedly inspired director Billy Wilder to write 'The Apartment,' and along the same lines, 'Brief Encounter' also profoundly impacted director Robert Altman when he first viewed the movie as a young man. Such influences are worth noting, for they highlight how deeply this simple, relatable story and its stark, direct presentation can affect an audience. Though Lean dresses up the tale with some artistic touches, he's careful not to draw attention away from his characters and their wrenching plight, thus maintaining the intimacy that fuels much of the film's appeal. Most love stories of the day were sweeping, melodramatic, and more than a little sappy, but, thanks to Lean, 'Brief Encounter' bravely and wisely bucks that trend. It may not make you cry, but it surely will punch you in the gut, and that's rare for a romantic movie, then and now.

Despite its age and the ever changing mores of a fickle society, 'Brief Encounter' remains timeless, because it fixes its gaze on two mature people who handle a devastating situation in a mature manner, making difficult choices for the right reasons and solving problems like grown-ups. It's not a cheerful film, but the emotional response it evokes makes it resonate. For Lean, who received his first Best Director Oscar nomination for the movie (and also shared a Best Adapted Screenplay nod), 'Brief Encounter' would be his first virtuoso performance (augmented by the swelling strains of Rachmaninoff's 'Piano Concerto #2,' which comprises the film's score), setting the stage for the following year's 'Great Expectations' and all the classic epics to come.

Lean would again explore tender, uncertain romance a decade later in 'Summertime,' but Technicolor, the glorious Venice locations, and Katharine Hepburn's vitality compete with that movie's central love story for our attention. 'Brief Encounter' has no distractions, and draws tremendous power from its unrelenting focus on two tortured people. It's amazing to think the man whose name would soon become synonymous with massive spectacles could craft such an understated film, but its unqualified success is a tribute to Lean's gifts and his affinity for both the finer points of character and vagaries of the human condition. 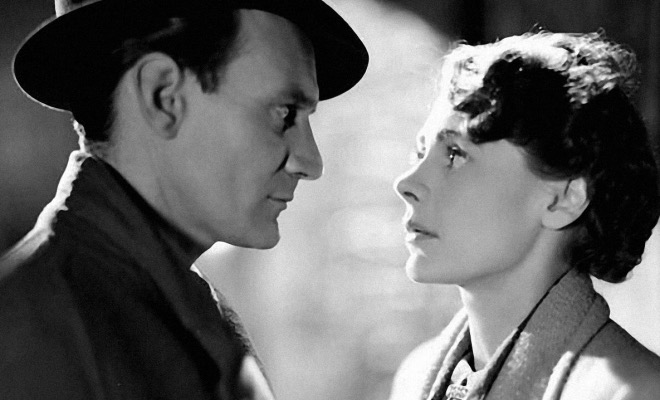 The stand-alone release of 'Brief Encounter' arrives on Blu-ray packaged in a standard Criterion case. A booklet featuring an essay by historian Kevin Brownlow, cast and crew listing, and transfer notes is tucked inside the front cover. Video codec is 1080p/AVC MPEG-4 and audio is LPCM mono. Once the disc is inserted into the player, the static menu with music immediately pops up. No previews or promos precede it.

The 'Brief Encounter' transfer is identical to the one from the 'David Lean Directs Noel Coward' collection, so no uprgrade is necessary if you own that box set. Newly restored for that collection in 2012, the transfer, according to the liner notes, "was created in 4K resolution...from the best surviving duplicate safety negatives." Superior gray scale variance lends the image a wonderful feeling of depth, while deep blacks convey a sense of hopelessness and foreboding. Contrast and clarity are top-notch, patterns are rock solid and resist shimmering, and light grain laces the picture with additional texture. Close-ups are sharp, shadow delineation is quite good, and background elements, especially in the tea room, are easy to discern. Dirt and debris have been meticulously removed, leaving a clean image that allows us to fully invest ourselves in this heartbreaking tale. Even in the darkest scenes, noise is absent, and any digital enhancements have been judiciously applied. This is another stellar effort from Criterion that beautifully salutes a time-honored classic.

The LPCM monaural soundtrack, which was restored from a sound print made from the original nitrate track negative, also remains the same. The audio is remarkably free of hiss, pops, and crackles, thanks to plenty of clean-up, but some errant imperfections do remain. Due to the track's advanced age, depth and fidelity are somewhat lacking, but a wide dynamic scale keeps distortion at bay and nicely showcases the soaring highs and resonant lows of Rachmaninoff's lushly romantic 'Piano Concerto #2,' which so beautifully complements the story and fills the room with symphonic elegance. Dialogue is always clear and easy to comprehend, and accents such as train whistles and footsteps are crisp and distinct. Though the video surpasses the audio, the track's clean, vibrant tones serve the film well and preserve the intimate feel of this classic love story.

All of the supplements from the previous Blu-ray disc are included here, and it's a nice collection of interesting material.

David Lean's 'Brief Encounter' is one of the all-time great cinema love stories, and at last it gets a stand-alone release from Criterion. Though the disc is the same one included in 2012's 'David Lean Directs Noel Coward' box set, hopefully the renewed attention this superior film will receive as a result of its individual release will yield a wider audience. Simple, intelligent, and deeply moving, this impeccably directed tale detailing the attraction between a British housewife and a married doctor combines Lean's artistry with excellent performances from Trevor Howard and Celia Johnson. Superior video and audio transfers and a fine selection of supplements distinguish this disc and breathe new life into a beloved classic film. Highly recommended.