What's worse than high school and your crush learning you secretly like them? Your parents forgetting your sixteenth birthday! John Hughes' 80s comedy Sixteen Candles may not be a high watermark compared to his other features, but the great cast including Molly Ringwald, Anthony Michael Hall, and Michael Schoeffling win the day. It may not be a true classic - but it captures the spirit of the worst part of adolescence. Arrow Video upgrades Sixteen Candles to Blu-ray with a terrific new transfer, solid audio, and is packed with fine bonus features. If you're a fan, it's a great release. If you're not a fan - a gorgeous video transfer probably won't change your mind. Recommended

"They forgot my Fu#*ing birthday!"

High school is hell. What's worse than high school? Your crush learning you're into them after finding your super-secret survey. What could be worse than that? Having it happen on your sixteenth birthday - that your parents forgot! For Samantha (Molly Ringwald) that's exactly what happened. Her crush Jake Ryan (Michael Schoeffling) has found out she's into him. Her parents (Paul Dooley and Carlin Glynn) completely forgot about her birthday because her older sister is getting married to a sweaty bohunk dope. To make things worse, Geek (Anthony Michael Hall) won't let up - all on the night of the big school dance and blowout party at Jake Ryan's house. Samantha should be celebrating, instead, she's just trying to survive the embarrassment. 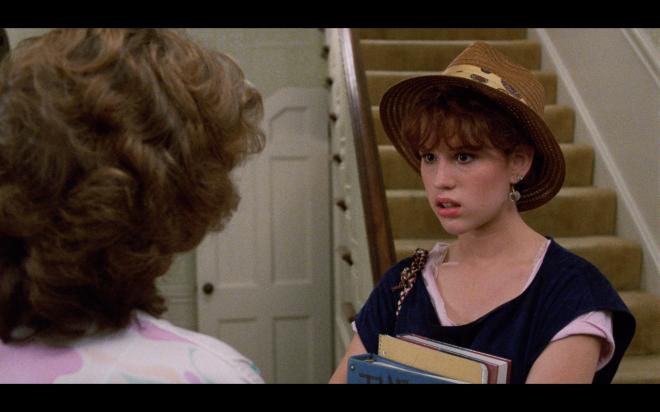 As I mentioned in my review for Pretty In Pink - John Hughes had a knack for capturing teenage angst in a way that was actually genuinely relatable to teens of the 80s. Rather than being a moralizing adult finger-wagging down to the teen audience, he approached his early movies at their level. High school sucked for most folks out there, that's why his films continue to be relatable nearly forty years later. If you can't directly relate, you can certainly empathize. Every kid has had to face the embarrassment of someone learning their secret crush. An embarrassing story spreads through high school like wildfire. Samantha's plight is completely relatable. You're growing up, you want to be recognized as a near-adult, but circumstances prevent that.

That is pretty much where most relatable scenarios of Sixteen Candles stop. Like Weird Science - this is more of a silly adventure than something one the profound and relatable scale like The Breakfast Club. Which is fine. This movie is clearly meant to be fun. It's just not that amazing and a lot of the humor is pretty damn dated. I get a lot of it because I'm an 80s child and some of the words and turns of phrase and a few of the more ethnically insensitive depictions were funny then - but they're really not now.

This is where John Hughes movies can go one of two ways - elevate and relate the humor to everyday people - or punch down. A lot of the gags in Sixteen Candles punch down. It goes for the easy joke like naming a Korean character Long Duk Dong and even giving a stinger every time someone says his name. It's a bit of an eye-roller. Thankfully for every cringe-inducing gag, there are about a dozen others that land and still hold up.

Of the "zany" movies John Hughes scripted/produced and/or directed in the 80s, Sixteen Candles is probably the better of them. While it has those cringe-worthy moments, there is an energy to the movie that I love. As a kid, I did everything I could to not get in trouble and tow the straight and narrow line. As a result, I was often left out of a lot of fun - either because friends didn't think I'd have a good time or fear I'd narc on them. It wasn't until a blowout senior party that I actually let myself loose to have fun. That's what the final third of this movie reminds me of - a big out of control house party where everyone has a great time. Granted we never trashed the host's house - but we got plenty rowdy, so it was good that we were well out into the woods where folks weren't likely to call in a noise disturbance.

It may not have aged well, but Sixteen Candles is one of those 80s gems that's still entertaining. It's not John Huges' best movie - he made better before and after this film - but it holds up. For a movie well past its own sixteenth birthday - that's the best you can hope for. You don't want to revisit an old favorite only to discover you've aged out of it. A good comedy should still make you laugh decades later - and this one's still damn funny most of the time.

Sixteen Candles earns a genuine Special Edition release on Blu-ray thanks to Arrow Video. Pressed on a Region A BD-50 disc, the disc is housed in Arrow's usual clear case with reversible artwork complete with cardboard slipcover. Included is a booklet containing images, essays, and restoration information. The disc loads to an animated main menu with traditional navigation options.

Like so many of Universal Pictures' catalog releases,  Sixteen Candles' first outing on Blu-ray suffered from some unfortunate edge enhancement and DNR. While not the worst example of their releases, it wasn't a winning transfer either. Arrow Video went back to the well for this release and fixed a lot of those pesky issues providing fans with a well-detailed and film-like presentation. With film grain intact and sharp organic details, the image shows no signs of smoothing. From facial features to clothing to the set design work - everything in this image clicks. Colors also pick up a nice boost with bright and natural primaries. If there's a little bit of a quibble to be had it's that the grain field can look a bit chunky and gritty at times. Not that it's an unnatural presence, but the grain can appear as if the frame was slightly optically zoomed in. It's not distracting or pull you out of the moment, but it's easy to spot all the same. Black levels are nice and inky and whites are well balanced.

Sixteen Candles now comes packed with a trio of audio tracks to choose from - a solid DTS-HD MA 5.1 mix and two DTS-HD MA mono tracks - one with the original theatrical mix and the other the home video mix that had different music cues. Of the three I prefer the surround mix - it's much better balanced with a more natural presence. While I usually welcome original stereo or mono mixes for catalog movies, this time I'm a bit underwhelmed. Both of these mono mixes feel either tinny and flat or muffled to the point where I had to ride the volume to pick up some of the dialogue. The surround mix didn't have that problem. It's not the most dynamic surround mix, but there's plenty of object placement and atmosphere with enough channel engagement to keep the track afloat.

As with any Arrow Video release, fans get a nice chunk of worthwhile bonus features to pick through. While listed as a bonus feature, there's really not much difference between the Theatrical and Unrated releases aside from the 1:28 sequence that can be accessed directly instead. The rest of the materials are typical but fun retrospective interviews. You get some decent stuff here, not earth-shattering but good.

Sixteen Candles may not be the best John Hughes movie of the 80s - but it's a fun one. While parts of it don't age well, other pieces work and hold up to this day. As a madcap comedy, it's got some great gags that play well - others are a bit dodgy and very much of their era. Arrow Video provides a worthwhile upgrade over the previous Universal Studios release offering a cleaner more natural picture quality, two cuts of the film, a great surround track, as well as a few worthwhile bonus features to pick through. This isn't my favorite Hughes movie, but it's one worth revisiting for the fun it has to offer. Recommended.