The John Hughes' and Howard Deutch's 80s classic Pretty in Pink finally earns its first Blu-ray release as a part of the Paramount Presents label. Molly Ringwald, Andrew McCarthy, Jon Cryer, with a lovable performance from Harry Dean Stanton - capture this slice of heartbreak-fueled high school life. While the clothing may be dated, the story hasn't aged a day with relatable characters and great performances. Paramount delivers a truly excellent 1080p transfer with robust details and an impressive surround audio mix to match. Bonus features are a bit slim - but to finally have this film on Blu-ray is well worth it. Highly Recommended.

High schooler Andie (Molly Ringwald) and her father Jack (Harry Dean Stanton) live on the "wrong side of the tracks" - at least financially. When Andie falls for rich upper-crust Blane (Andrew McCarthy), she risks alienating not only her best friend Duckie (Jon Cryer) but also earns the derision of Blane's friend Steff (James Spader) and their entire crew of friends. 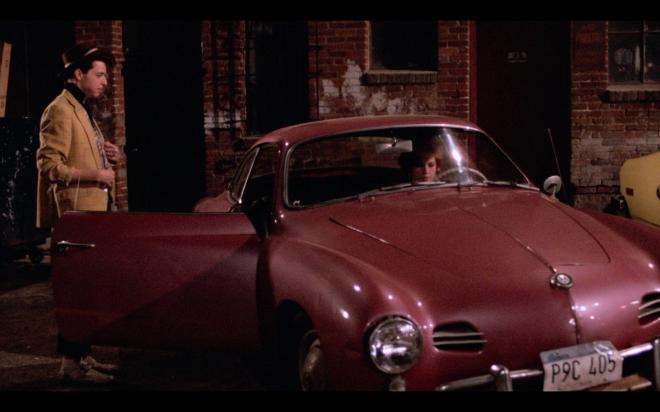 High School sucks. I think that was true for most folks - or at least it was me. On top of debilitating migraines, my heavy set nature, and my extreme social awkwardness due to a combination of nerdy hobbies - I didn't exactly have much in the way of self-confidence. Watching Pretty in Pink, I wish I was as cool and confident as Duckie in school! Yeah, he may not be the rich cool kid - but the dude has confidence! I didn't have much of that until college.

I mention my sad run of teenage years in this review to point out that just because Molly Ringwald is the lead Pretty in Pink as a movie is relatable to just about anyone. Those last gasps of teenage years suck - that period where you're figuring yourself out, find new friends while old friends appear to change overnight. Or worse, you change and manage to alienate everyone you know in the process. While guilty of making easy churn movies in his later career, you got to hand it to John Hughes for having his finger on the pulse of what it was like being a teenager.

When I was a kid it felt like either Pretty in Pink, The Breakfast Club, or Sixteen Candles were always on T.V. As I mentioned in my Friday the 13th review, WXON TV20 always ran the best movies. Once their Thriller Double Feature was over, it was usually followed by a "teen" movie of some sort and John Hughes' movies were frequently on the programming docket. As a little kid who had just enjoyed his fill of edited for television carnage and mayhem, teen angst wasn't high on my list. But I usually ended up watching with my sister since nothing else was on. It took me well into my late teens to appreciate those movies.

It'd been a few years since I last watched this movie; it's one of my wife's favorites. It was fun to reconnect with it now that we're parents. All of the issues we felt and related to the characters - it hit us our son is going to face similar issues. Not really looking forward to the first time someone breaks up with him or rejects him - but then again I do have a lot of experience in that area! While I personally wouldn't put Pretty in Pink on the scale of The Breakfast Club - nonetheless, it's a hell of a show that's held up for over 30 years now.

Paramount delivers Pretty In Pink on Blu-ray for the very first time as a part of their Paramount Presents label in a single-disc set. Pressed onto a BD-50 disc, the disc is housed in a clear case with a cardboard slipcover that opens up to reveal the original poster art. The disc loads to a static image main menu with traditional navigation options.

As the Paramount Presents line has been a bit hit or miss from one release to the next, I'm very happy to report that Pretty in Pink enjoys a truly splendid Blu-ray debut. The 1.78:1 1080p transfer sparkles with pristine details, a healthy natural grain field, and bold vivid colors. Admittedly the opening credits were a bit of a worry spot. Most likely due to processing for the credits, the grain field is extremely gloopy with hazy details. It was a serious "oh no" moment, but once those credits disappear and Andie is sitting in class being harassed by the rich girls, everything evens out and looks fantastic. The 80s clothing looks great, Annie Potts' record store offers up tons of production design detail, and the colors offer some welcome primary punch allowing for blues, reds, and the occasional bit of yellow to flow in. Details may almost be too good as Andrew McCarthy's wig at the end is even more obvious than ever before!

As I had some free credits to burn, I snagged the 4K UHD streaming copy on VUDU and I'm actually very happy to report that this Blu-ray is a comparable experience. The most notable benefit of the streaming version is Dolby Vision HDR to give the image a boost in color, balance some hot whites a little, and give extra depth to blacks. However, likely because of the limited bitrate of streaming, I really didn't experience that stunning an improvement in details and textures. Some of the knitted clothing Andie wears and some of the design work pop a little better, but overall I'd place the two presentations nearly neck and neck.

Another welcome upgrade for Pretty in Pink is an engaging and somewhat immersive DTS-HD MA 5.1 audio mix. Considering age and previous home video presentations as well as the type of movie it is - I honestly didn't expect much of a "surround" experience. While the front/center channels do a large amount of the heavy lifting, sides and rears open up a little to give a sense of scale and dimension to the soundscape. The movie's soundtrack is pretty terrific so when Duck Man "serenades" Andie in the record store it's a hell of a moment in the mix. Crowd scenes at school, the party, or the final dance get the most genuine surround presence of the film. Quiet conversational moments keep the fronts and sides active while maintaining some sense of imaging. When a stereo mix would have done just fine, this 5.1 track is a welcome upgrade.

Unfortunately, there aren't a lot of bonus features here - as has been the track for these Paramount Presents titles to date. The Howard Deutch Filmmaker Focus is kinda nice but at 7ish minutes it's nowhere near long enough to be really more than a flash of brief talking points from what feels like a longer interview. The alternate ending is the same SD clip that's been available on DVD for some time. There is an isolated score track found in the Settings menu and not really listed in the bonus features, but I'm including it here all the same.

As a guy growing up in the 80s, Pretty in Pink wasn't "my" movie. I was into horror and action movies, Predator, Rambo, and Alien. As I got older and was more or less forced to rewatch this and other Hughes movies, I got it. Pretty in Pink is like The Breakfast Club in a lot of ways in that there's at least one (if not more) character that you can identify with. It may not be as great a movie as The Breakfast Club, but it's a true 80s gem, and aside from fashions hasn't aged a bit. High school still sucks and this movie is a comforting reminder that you're not alone in that arena.

Paramount has done this movie a great service by finally bringing it to Blu-ray as a part of their Paramount Presents label. With a great transfer and an impressive audio mix to match - this movie gets the A/V presentation it has long deserved, even if it should enjoy a better package of bonus features. Highly Recommended.