What happens when you put five strangers in Saturday detention? Badass posturing, gleeful misbehavior, and a potent dose of angst. With this exuberant film, writer-director John Hughes established himself as the bard of American youth, vividly and empathetically capturing how teenagers hang out, act up, and goof off. The Breakfast Club brings together an assortment of adolescent archetypes—the uptight prom queen (Molly Ringwald), the stoic jock (Emilio Estevez), the foul-mouthed rebel (Judd Nelson), the virginal bookworm (Anthony Michael Hall), and the kooky recluse (Ally Sheedy)—and watches them shed their personae and emerge into unlikely friendships. With its highly quotable dialogue and star-making performances, this film is an era-defining pop-culture phenomenon, a disarmingly candid exploration of the trials of adolescence whose influence now spans generations.

What separates the John Hughes' teen films from the countless others released before his directorial debut with Sixteen Candles is the genuine respect he showed for the adolescent characters being portrayed and the young audience watching his films. The people occupying the fictional town of Shermer, Illinois act like real teens, with legitimate concerns about those awkward years between childhood and the world of adults. His plots are infused with a general understanding and experience many viewers can relate to. Hughes' films don't treat teenagers condescendingly or portray their emotional lives as superficial or shallow plot devices. In his films, teens are allowed to speak their minds with a unique, authentic voice all their own. No film demonstrates this better than The Breakfast Club, a movie frequently celebrated for defining teen culture. 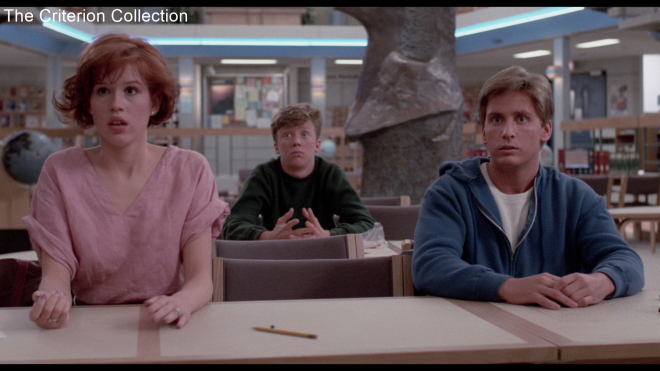 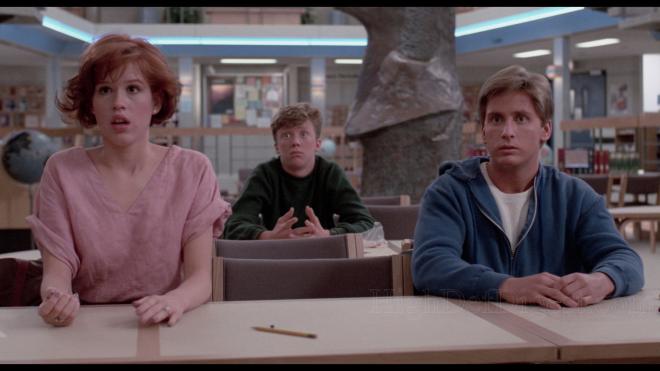 Hughes clearly did something right with The Breakfast Club, since kids today are still watching and enjoying the film. They continue to find a connection with the characters and dilemmas of high school life. In many respects, the 80s teen classic appears to be an accurate portrait of adolescence, a film that doesn't feel condescending or artificial. It digs deeper into what concerns kids most — a desire to talk, be heard, and make friendship, and because of this, The Breakfast Club remains incredibly influential and respected.

This Blu-ray edition of John Hughes' The Breakfast Club comes courtesy of The Criterion Collection (spine #905) on a Region A locked, BD50 disc and housed in their standard clear keepcase. Accompanying the disc is a 24-page booklet with an insightful essay entitled "Smells Like Teen Realness" by author and culture critic David Kamp. There are no trailers or promos before being greeted by the distributor's normal static menu screen and options. 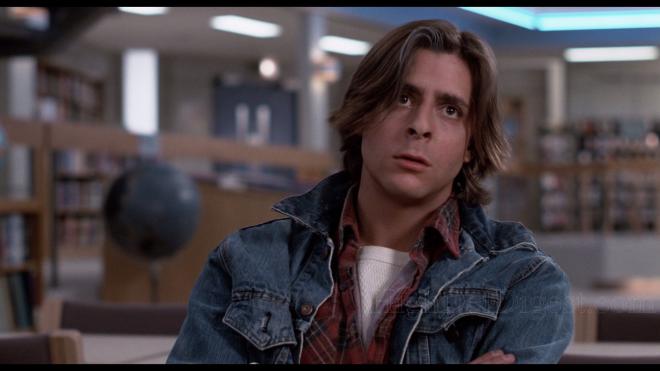 According to information in the accompanying booklet, the AVC MPEG-4 encode was struck from a brand-new remaster of the original 35mm camera negatives at 4K resolution. This is great news and very much appreciated since the comedy classic deserves the best possible treatment. However, the results unfortunately don't yield the sort of night and day difference one would have hoped for when compared to Universal's 30th Anniversary release from a couple years ago, which reportedly was also struck from a new restoration of the original elements. This is not to suggest there are not any visible improvements because there are. Even though the difference is relatively mild and near negligible, it is enough to say this is the best the movie has ever looked on home video to date.

What this transfer also reveals to us is that the cinematography will likely always be the limiting factor in all future releases. The only other possible improvements imaginable could come from the higher dynamic range and wider color gamut provided on the Ultra HD format, but we'll have to wait and see if studios want to spend the time and money on that. For now, this HD presentation delivers the same warmer gamma as before, showing brighter, deeper reds and oranges, giving facial complexions a more natural, rosier glow. Contrast remains the same and well-balanced with crisp, clean whites. One of the better improvements is the brightness levels, displaying inky and full-bodied blacks without reaching the point of crushing the finer details, and the very minor banding from the previous release is now gone.

A majority of the 1.85:1 image falls on the softer side of things, suggesting this is inherent to the original photography. Nevertheless, this version definitely shows better definition and resolution overall without any the pesky artificial touch-ups and sharpening seen on the last Blu-ray. Here, minor blemishes and small wrinkles are exposed, and the entire frame is consistently awash in a very fine layer of natural grain, giving the presentation a lovely film-like quality. Viewers can also better appreciate the smallest detail in the background, and the threading and stitching of each outfit are sharp. All things considered, and in spite of yielding negligible improvements, owners of previous editions have reason to purchase the film again, as this is probably the most faithful representation we're likely ever going to see. 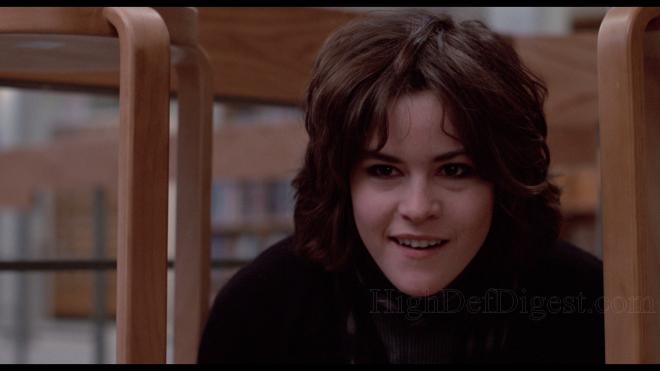 The accompanying booklet also mentions the soundtrack was remastered from the same 35mm elements used for the video, and Criterion presents it here as an uncompressed PCM 2.0 monoaural track. A DTS-HD Master Audio option is also available and appears to be identical to that heard on the Universal Studios Blu-ray. As for the mono version, audio purists will be incredibly happy with the results, displaying excellent clarity without the slightest hint of distortion. Dynamics and acoustics maintain superb detailing within each note and instrument, providing every song selection with palpable fidelity and outstanding sense of presence. Low bass is equally robust and hearty so that each song carries an appreciable weight and depth. Of course, this being a character-driven comedy, dialogue is given top priority, delivering exceptional intonation in every emotive line and distinct clarity in the slightest change of pitch and inflection. Although the DTS-HD track is equally enjoyable, it's nice to have a first-rate audio track such as this as an option. 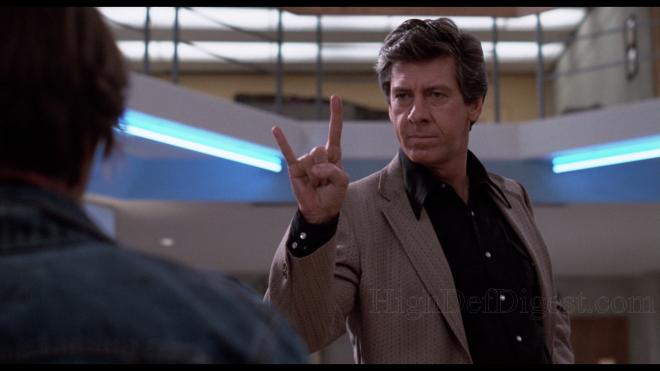 Audio Commentary: Stars Judd Nelson and Anthony Michael Hall team up for this commentary track. The discussion is full of some cool tidbits and stories surrounding the production, and their friendly banter is quite enjoyable and full of memories, just nothing we would call technical. Overall, it's a cool listen and comes with plenty of smiles.

Sincerely Yours (SD, 51 min): This documentary is actually broken into 12 segments that can be watched separately or in sequence. It features interviews with cast and crew reminiscing on the production and working with the late John Hughes. A few of the segments are character-oriented, where actors talk about preparation for the role and motivation. Other interviews mull over the cultural impact and legacy of the film. This is a nicely done and comprehensive doc for fans to enjoy, but my one nitpick is the fact that Diablo Cody participates in the discussion. Personally, she's quite distracting and terribly feels out of place.

The Breakfast Club is arguably John Hughes' most celebrated motion picture, often viewed as defining the 80s youth culture. The teen classic is a smart film which provides its adolescent leads with an authentic voice and doesn't treat them like caricatures. The immensely influential movie arrives courtesy of The Criterion Collection with a generally satisfying audio and video presentation that honestly doesn't improve much from the previous release, but a treasure trove of new supplements will definitely tease fans. Taken as a whole, it's a strong package, and fans of classic 80s cinema will surely be happy with the purchase.