House by the River

House by the River may not rise to the top of any Fritz Lang favorites list, but this little-known, under-appreciated suspense yarn stands as another solid entry in the legendary director's distinguished film canon. Tense, moody, and atmospheric, House by the River chronicles the desperate attempts of an amoral, lascivious Victorian novelist to cover up the murder of his attractive young housemaid, and is distinguished by a strong script, solid acting, and Lang's distinctive artistry. A brand new 2K master and clean lossless audio spice up Kino's Blu-ray presentation, which nicely honors this effective exercise in suspense. Recommended.

People were just as nasty and depraved during the Victorian era as they are today; they just hid it better. All those layers of constrictive clothing cleverly masked a litany of repressed longings, shameful vices, and dirty secrets...but when they bubbled over, the eruption often rivaled Mount Vesuvius. Cruelty and violence somehow seem more brutal and vicious when the bullies are dressed in fancy finery, and because decorum is such a vital Victorian character component, it's all the more shocking when seemingly upstanding citizens crack.

Maybe that's why films like Gaslight, The Lodger, Hangover Square, and The Picture of Dorian Gray are all so fascinating and effective. With uncommon relish and insight, they explore the seamy underbelly of this rarefied culture while weaving an intricate psychological web. So, too, does House by the River, which takes the action across the pond to America and cleverly injects film noir conventions into the gothic scenario. The result is a creepy, engrossing exercise in suspense directed by one of the genre's masters, Fritz Lang.

If you haven't heard of House by the River before, join the club. Sandwiched between Lang's milestone 1940s films (Ministry of Fear, The Woman in the Window, and Scarlet Street) and his early 1950s renaissance that culminated with The Big Heat, this minor but often electrifying thriller tends to get lost in discussions of his work...possibly because House by the River literally got lost for a while. After falling out of favor with the major studios (blame his ego and disagreeable personality), Lang landed at poverty row Republic Pictures, where he gained a measure of artistic freedom but sacrificed the commercial cachet he previously enjoyed. The financial failure of House by the River may have hastened its tumble into obscurity, where it languished for quite some time. 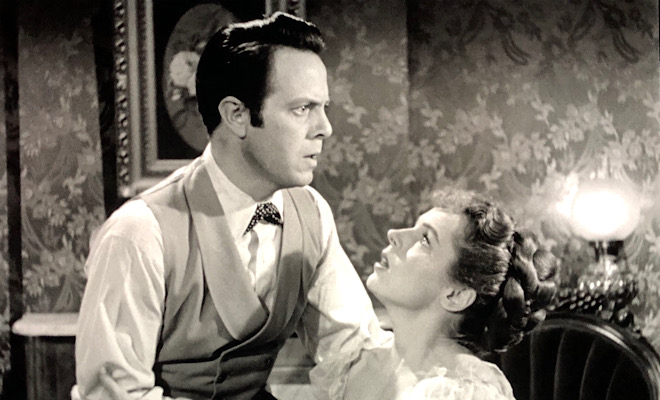 Why the film never caught on remains a mystery, because it brims with style and atmosphere and features an engrossing plot and high-quality performances. Lang proves he doesn't need a big budget and big-name stars to create movie magic. His patented artistry is on full display, with stunning shot compositions, impeccable pacing, and a couple of special effects heightening the air of dread and sense of unease that permeate the production. Who cares if the plot's outcome is predictable? It's how we get there that matters, and Lang takes us on a compelling journey.

Middling novelist, spendthrift, and compulsive ne'er-do-well Stephen Byrne (Louis Hayward) resides in the titular house by the river with his loving wife Marjorie (Jane Wyatt), but his roving eye and insatiable sexual desires threaten his seemingly idyllic existence. A new servant girl, Emily (Dorothy Patrick), strikes Stephen's fancy, but when she rejects his overt advances, a struggle ensues, and in his desperate effort to stifle her screams, he accidentally strangles her to death.

Moments later, his upstanding older brother John (Lee Bowman) happens upon the grisly scene and flatly tells the panic-stricken Stephen this is one mess he won't help him clean up. Much like the spoiled murderess Veda Pierce implores her mother not to turn her in in Mildred Pierce, Stephen begs John not to notify the police, and finally, against his better judgment, John agrees to help Stephen dump the body in the river. All is well for a while - Stephen even exploits Emily's "disappearance" for his own personal gain - but when the body at last resurfaces, the carefully woven cover-up begins to unravel. As guilt gnaws at John and desperation unhinges Stephen, their respective fates rest on the outcome of the police investigation into Emily's death. 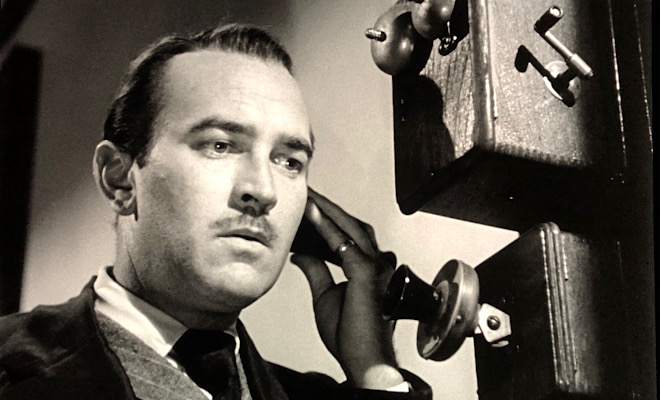 Lang specialized in provocative themes throughout his career. He consistently pushed the envelope with varying degrees of success, but his audacity - coupled with a keen, kinetic vision - is what makes his work so fascinating. Like Hitchcock, he's supremely adept at depicting psychological deviance and the internal turmoil that stems from it, and the sordid plot of House by the River (screenwriter Mel Dinelli also wrote another classic period thriller, The Spiral Staircase) allows him to flaunt this talent to the fullest degree.

Though he's not related to the far more famous Susan, Louis Hayward is a fine actor who deftly embodies the arrogant, unbalanced, oh-so-slimy Stephen. Best known for playing twins in the original version of The Man in the Iron Mask (Leonardo DiCaprio took on the dual roles in the 1990s remake), Hayward never quite made it onto Hollywood's A list, but he's an intriguing presence here, and his deliciously creepy portrayal elevates the film. Bowman is stiffer (his trademark blandness never overshadowed his more flamboyant leading ladies), but nicely conveys the debilitating angst that consumes his tortured character.

Wyatt is quite good as well. I must sheepishly admit I always underestimate her film work because of her iconic turn as one of TV's first sitcom moms in the long-running 1950s series Father Knows Best with Robert Young. Though saddled with a subordinate, one-dimensional role on that show, Wyatt always projects strength and confidence on the big screen, and exudes an attractive naturalness that makes her portrayals resonate. Her work here is no exception, and her scenes with Hayward simmer with underlying tension.

Even minor works by major movie craftsmen deserve attention, and House by the River certainly merits rediscovery. Packed with tension, laced with provocative undertones, and oozing style, this obscure, often gripping Fritz Lang film will surprise and delight the director's fans and anyone who enjoys a dark, dastardly thriller. Kudos to Kino for reviving this long lost title and honoring the superior work of one of America's foremost motion picture directors. 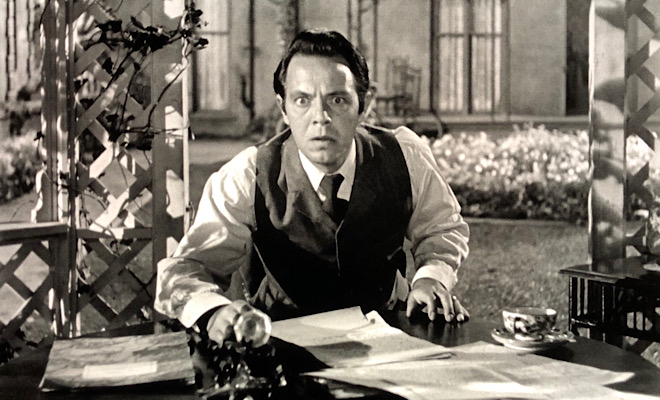 House by the River arrives on Blu-ray packaged in a standard case. Video codec is 1080p/AVC MPEG-4 and audio is DTS-HD Master Audio 2.0 mono. Once the disc is inserted into the player, the static menu with music immediately pops up; no previews or promos precede it.

A brand new 2K master breathes new life into House by the River and the resulting 1080p/AVC MPEG-4 transfer from Kino immerses us in this tense, atmospheric film. Excellent clarity and contrast honor Edward Cronjager's moody cinematography, while a healthy grayscale enhances depth. A natural grain structure supplies necessary texture and preserves the feel of celluloid, with only occasional fluctuations disrupting the flow. Overall, black levels are rich and deep, but they tend to fade a bit and become diffused at the edges of the frame. Shadow delineation is quite good, the details of the heavily patterned wallpaper and cluttered Victorian interiors show up nicely, and close-ups highlight glistening perspiration and fine facial features well. A few faint vertical lines and some mild speckling dot the print, but for a film that was so obviously neglected over the years, the source material appears strikingly clean. Though this transfer isn't perfect (some scenes appear softer than others), it exceeds expectations and makes us appreciate this little-known, underrated classic all the more.

The DTS-HD Master Audio 2.0 mono track supplies clear, well-modulated sound. Sonic accents like the shrill door chimes, piercing screams, and heavy footsteps are crisp and distinct, while subtler sounds like creaky floorboards and lapping river water heighten the eerie atmosphere. A wide dynamic scale handles all the highs and lows of George Anthiel's melodramatic music score with ease, no distortion creeps into the mix, and silences are clean. All the dialogue is easy to comprehend, even when delivered in barely audible whispers, and no age-related hiss, pops, or crackle disrupt the tension-filled mood. Sound is a crucial element in thrillers like House by the River, and this excellent track serves this unsettling film well.

Another riveting work from master craftsman Fritz Lang, House by the River brims with atmosphere, suspense, and artistry. This gripping tale of an amoral Victorian novelist who strong-arms his straight-arrow brother into helping him cover up a murder won't go down in history as one of the director's most celebrated films, but it remains a fascinating curio that deserves more recognition than it's received. A strong script, solid acting, and Lang's always arresting style elevate this moody movie, and though supplements are slim, a new 2K master and fine lossless audio bolster the appeal of this welcome and winning release from Kino. Recommended.