Melodrama casts noirish shadows in this portrait of maternal sacrifice from the Hollywood master Michael Curtiz. Its iconic performance by Joan Crawford as Mildred, a single mother hell-bent on freeing her children from the stigma of economic hardship, solidified Crawford’s career comeback and gave the actor her only Oscar. But as Mildred pulls herself up by the bootstraps, first as an unflappable waitress and eventually as the well-heeled owner of a successful restaurant chain, the ingratitude of her materialistic firstborn (a diabolical Ann Blyth) becomes a venomous serpent’s tooth, setting in motion an endless cycle of desperate overtures and heartless recriminations. Recasting James M. Cain’s rich psychological novel as a murder mystery, this bitter cocktail of blind parental love and all-American ambition is both unremittingly hard-boiled and sumptuously emotional.

Nothing tugs at the heart strings like maternal martyrdom, and Hollywood milked every last tear from the well-worn theme during its storied Golden Age. Emotional melodramas like 'Stella Dallas' and 'The Sin of Madelon Claudet' shamelessly rode its coattails to box office success, but such maudlin mush lost its appeal in the 1940s, enabling 'Mildred Pierce' to spice up the clichéd formula by injecting a delicious dose of sadomasochism into the mix. Instead of society dealing the mother a series of devastating blows, why not have her spoiled, ungrateful daughter vindictively - and repeatedly - beat her down instead? The mother abhors the abuse, but prefers to take it rather than cut her beloved offspring out of her life. How far will the daughter go? How much can the mother take?

Such a conflict had never before been explored on screen, and though director Michael Curtiz's slick adaptation of the stinging novel by James M. Cain ('Double Indemnity,' 'The Postman Always Rings Twice') remains very much a "woman's picture," little sentiment courses through its veins. On the contrary, this hard-boiled, often riveting study of a dysfunctional (and debilitating) relationship more acutely resembles film noir. Violence and deceit punctuate Cain's psychological tale, which shines a glaring spotlight on the growing insolence and disaffection of America's youth.

The classic mother-love movies of yore focus on the secret sacrifices women willingly make to give their beloved progeny a better life. The sensitive children in these four-handkerchief weepies rarely learn of their mother's noble deeds because she goes to Herculean lengths to conceal the truth. 'Mildred Pierce,' however, thumbs its nose at such pathos as it paints an uncompromising portrait of a parasitic daughter who actively preys upon her mother without batting an eye. This daughter encourages sacrifices, and relishes the spoils they generate, then derides her mother for making them, claiming she's inferior and shameful. Sadly, the attacks only goad the mother into making further sacrifices and giving her daughter more...and more...and more. And yet it's never enough.

Heartless and cruel, the petulant, velvet-toned Veda Pierce (Ann Blyth) cares nothing for the woman who works herself to the bone to support her, the woman who willingly feeds her insatiable greed just to see her smile. Mildred (Joan Crawford) - the poster child for maternal doormats - doesn't want gratitude, she wants love, and mistakenly believes indulging Veda to the nth degree is the best (and perhaps only) way she can get it. Yet by doing so, Mildred unwittingly teaches Veda to overvalue material things and equate them with affection, thus creating a resentful, immoral monster who's never satisfied and always works angles or stomps on others to get what she wants. And as we all know, such behavior - especially under Hollywood's rigid production code - always leads to trouble in the end.

'Mildred Pierce' opens with a man getting repeatedly shot, then soon flashes back to chronicle the events leading up to the crime. Yet in addition to the murder investigation and incisive depiction of Mildred and Veda's disturbing codependent relationship, the film also provides a detailed look at how a single woman can pull herself up by her bootstraps, support herself and her family, and eventually become an entrepreneur...with only minimal help from a man. Successful, independent businesswomen were a rarity in 1945 (at least on screen) and 'Mildred Pierce' - the first feminist film of the post-World War II era - helped empower women to expand their horizons and pursue their dreams. Though flawed, Mildred is certainly a role model. She's got guts, smarts, and ambition to burn (she rises from inexperienced waitress to restaurant tycoon with dizzying alacrity), and her strength and determination in the face of adversity are admirable indeed.

It's ironic, though, that a picture about a self-sacrificing, permissive mother would resurrect the career of Joan Crawford, whose abusive parenting style would be faithfully and famously recounted by her bitter adopted daughter decades later in the tell-all memoir 'Mommie Dearest.' After 18 fruitful years at MGM, Crawford no longer felt valued by the studio and signed with Warner Bros, yet two years passed before the venerable star could find a suitable property, shed her insecurities, and perform in front of the camera. She fought tooth-and-nail to play Mildred, and though she initially battled with Curtiz, who viewed her as a superficial star instead of an actress, she soon earned his respect. She also at last earned the respect of her peers, who awarded her the Best Actress Oscar for a finely tuned performance that brims with confidence and conviction. Almost instantly, Mildred Pierce would become Crawford's signature role, and only a couple of her subsequent portrayals would surpass her work here.

But if Crawford is the picture's perennially broken heart, Blyth is its stone cold soul. As the vile, vitriolic, and volatile Veda, who continually vilifies and vexes her mother (okay, I'll stop with the "v" words now), Blyth hits all the right notes. Though it would be easy to play Veda as a cartoon caricature in raving bitch mode, Blyth wisely resists the temptation. Sure, she lets loose when it's called for - the tirade when Veda calls her mother "a common frump" is especially memorable - but most of the time she exercises admirable restraint, even at times lacing her portrayal with hints of warmth. (Yes, warmth!) The result is a highly effective performance that holds up well 70 years later and justly nabbed Blyth a Best Supporting Actress Oscar nomination.

The priceless Eve Arden, as Mildred's wisecracking bosom pal Ida, also received an Oscar nod for her acerbic work, and Jack Carson as a smooth-talking real estate agent who's always trying to get Mildred in the sack and Zachary Scott as the oily, ill-fated playboy who dallies with both mother and daughter file spot-on portrayals as well. Without its strong supporting cast, the film would be far less entertaining, and Ranald MacDougall's Oscar-nominated screenplay might not exude the same snap, crackle, and pop.

'Mildred Pierce' may have lost the Best Picture Oscar to 'The Lost Weekend,' but over the years has had far more staying power than Billy Wilder's downbeat portrait of alcoholism. (The 2011 TV remake with Kate Winslet follows the original novel more closely, but I strongly prefer the Crawford version.) Though the melodrama might not be realistic, the underlying themes of greed, entitlement, and twisted family dynamics resonate all too strongly in our current day and age. Catfighting, shoulder pads, and murder aside, 'Mildred Pierce' fiercely preaches about the pitfalls of parenting, youthful arrogance, and whether unconditional love and respect can be bought. It's a powerful tale, and Curtiz and company get it right. 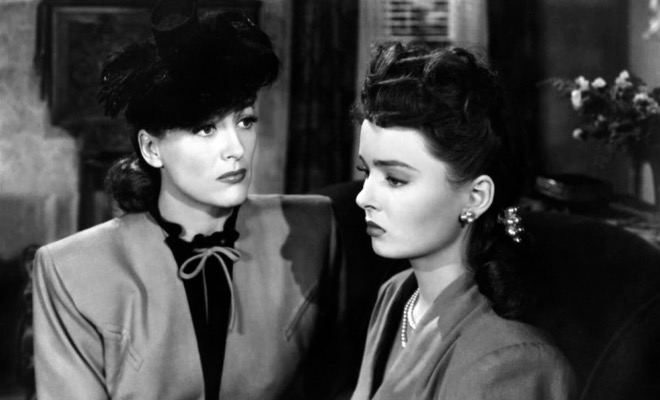 'Mildred Pierce' at last arrives on Blu-ray packaged in a standard Criterion case. A 12-page, fold-out booklet featuring an essay by film writer Imogen Sara Smith, color illustrations of Crawford and Blyth, cast and crew listings, and transfer notes is tucked inside the front cover. Video codec is 1080p/AVC MPEG-4 and audio is LPCM mono. Once the disc is inserted into the player, the static menu with music immediately pops up; no previews or promos precede it.

We've waited a long time for 'Mildred Pierce' to make her Blu-ray debut, and that's probably due to source material issues. The liner notes state "this new digital transfer was created in 4K resolution...primarily from the 35 mm original nitrate camera negative. Some sequences, including the entire last reel of the film, were scanned from a 35 mm nitrate fine-grain master held by the Museum of Modern Art in New York and a 35 mm safety fine-grain master." Some print issues are noticeable throughout the film, as grain levels and brightness occasionally fluctuate (some shots exhibit a harsh glare that doesn't seem intentional), but overall, this is a high-quality presentation that outclasses the long-standing DVD and appropriately honors Ernest Haller's Oscar-nominated cinematography. The image looks gloriously film-like, with palpable texture complemented at times by a lovely sheen that enhances the ritzy costumes and sets. Blacks are rich, whites err a tad on the harsh side, and a wide-ranging gray scale supplies necessary depth and detail. Shadow delineation is quite good (crush is rarely present), patterns resist shimmering, and no age-related nicks, lines, or scratches dot the print. Without a doubt, the 'Mildred Pierce' makeover is a resounding success, and fans of this classic psychological drama shouldn't hesitate to upgrade.

According to the liner notes, "the monaural soundtrack was remastered from a 35 mm soundtrack print created in 2002...from the variable-area original soundtrack negative." The result is well-modulated, often vibrant sound filled with nuance and tonal depth. Superior fidelity and a pleasing dynamic range beautifully render Max Steiner's lush, melodramatic, and string-laden score, and all the delicious dialogue is clear and easy to comprehend. Ambient effects like the hustle-and-bustle of a busy restaurant, driving rain, and the gentle waves of the Pacific lapping against the Malibu sand supply essential atmosphere, and sonic accents like gunfire, facial slaps, footsteps against pavement, ticking clocks, and the rustling of newspaper pages are all crisp and distinct. Best of all, no age-related imperfections like hiss, pops, and crackles rear their ugly heads, and no distortion creeps into the mix. Audio plays an important role in 'Mildred Pierce,' and this top-quality remastered track passes every test with flying colors.

Criterion enhances this release with a number of new and interesting extras, and ports over the feature-length documentary about Crawford from the previous DVD release. An audio commentary is still lacking, but that would just be icing on this very tasty cake.

Part woman's picture, part film noir, and part Freudian primer, 'Mildred Pierce' blends all its disparate elements into a very enticing and entertaining brew as it explores the complex and corrosive relationship between an indulgent, self-sacrificing mother and her selfish, often monstrous daughter. Joan Crawford won a well-deserved Oscar for her career-defining portrayal of the titular character, but it's the young Ann Blyth as the venomous Veda who really steals the show. Mystery, romance, and plenty of back-stabbing keep us immersed in the story, and Criterion's top-notch Blu-ray presentation, which features excellent restored video and audio transfers and a cavalcade of absorbing supplements, honors this classic film, directed with style and assurance by Michael Curtiz. 'Mildred Pierce' isn't perfect, but it's damn good, and this superior Criterion release - a must for Crawford fans - deserves a spot on every film-lover's shelf...right next to the wire hangers. Highly recommended.

Sale Price 27.99
List Price 39.95
Buy Now
3rd Party 17.99
In Stock.
See what people are saying about this story or others
See Comments in Forum
Previous Next
Pre-Orders
Tomorrow's latest releases