Oppressive heat, forbidden love, buried cursed Amazonian treasure - it's a smorgasbord of adventure and excitement with Jivaro 3-D! Directed by Edward Ludwig and starring Fernando Lamas, Rhonda Fleming, and Brian Keith, the film makes terrific use of its great cast and all three-dimensions in this fun and wildly entertaining movie. Kino Lorber Studio Classics releases Jivaro 3-D onto Blu-ray thanks to an incredible restoration by 3-D Film Archive! If you're a vintage 3-D fan, this is an essential piece of the collection. Highly Recommended.

Rio Galdez (Fernando Lamas) has a good thing owning a trading post in a remote part of the Amazon. Treasure hunters and missionaries and the local tribes looking to trade all rely on Rio and his boat to ferry goods up and down the river. When the beautiful Alice Parker (Rhonda Fleming) arrives looking for her fiancé Jerry (Richard Denning). Believing Jerry to be the owner of a successful rubber plantation, Rio is doesn't want to let his feelings for Alice get the best of him by exposing Jerry's lie. But when Jerry goes missing while searching for a lost cursed treasure deep into the rain forest, only Rio can save him - if the local head-hunting natives haven't killed him already. 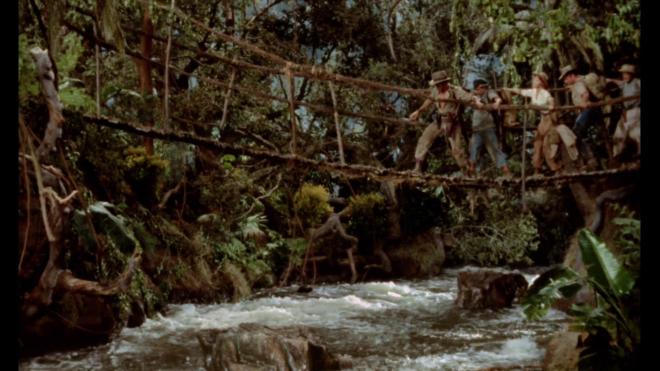 Jivaro - also known as Lost Treasure of the Amazon was a product of bad timing. Originally shot in stereoscopic 3-D, the format was in a steep decline at the box office and so the film was only released flat theatrically. 3-D Film Archive brought their traditional A+ restoration game for this wild adventure movie. It's the 3-D that makes Jivaro work and something special. In all honesty, if I had to see it only flat, I probably wouldn't have thought too much of it beyond 90-minutes of diverting entertainment. In 3-D the camera setups, staging, and all of the great locations come to life and gives the film some needed urgency and visual excitement.

Breaking down the romantic storyline coupled with a jungle adventure, Jivaro plays like 1932's Red Dust with Clark Gable and Jean Harlow combined with an Allan Quatermain story for some action with The Treasure of the Sierra Madre for an extra dash of gold-lust driven intrigue and betrayal. The film can be a tad disjointed feeling at times as the story is front-loaded with romance with the back end full of action and danger. The shift in pace was a little jarring, but the whole ride is a great time.

With the same swagger and energy that he bright to Sangaree 3-D, Fernando Lamas commands the screen as the macho but honorable Rio. There are a few moments where it feels like he was hired just to stand there and be a big slab of beefcake for Rhonda Fleming to work off of, but when the action gets rolling he's in good form. Fleming's Parker is thankfully not just a damsel in distress. While she's certainly attractive and is a worthwhile love interest, she's at least a capable character and not afraid to pick up a rifle when necessary.

As a fan of B-Movies and classic adventure and horror movies, I really enjoyed the supporting cast assembled for this flick. The most famous is obviously Lon Chaney Jr. as a cheat trader that Lamas gets into a friendly fistfight with. If that wasn't enough, familiar faces like Richard Denning, Brian Keith, Marvin Miller, Nestor Paiva, and the voice of Carmen Sandiego herself Rita Moreno all have fun little roles - Jivaro is chock full of recognizable character actors.

Jivaro 3-D may be a simple movie, the plot certainly isn't complicated, but it's a good time. The film rolls in at a good clip, takes the time to establish the characters and their interests, and then pushes forward with the romance and adventure. Like I said, flat, it probably isn't the most interesting flick to watch. But with 3-D, the intricate sets come alive and the excitement becomes infectious. Even when the characters are just standing at the bar, Jivaro becomes something engaging as you just want to soak in the scenery and let these entertaining actors do what they do best.

Jivaro 3-D arrives on 3D Blu-ray courtesy of Kino Lorber and their Studio Classics Label. Pressed on a Region A BD-50 Disc, the disc is housed in a standard sturdy Blu-ray case. The disc loads directly to a static image main menu with traditional navigation options. If you're 3D ready, the disc default loads to the 3D menu - but if you want you can select 2D as a viewing option. 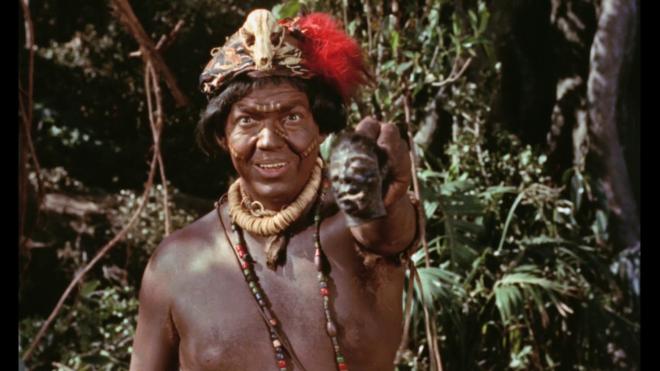 Outside of a single screening in 2006, this 1.66:1 1080p presentation is the first time Jivaro has been seen in its originally filmed and intended 3-D! Newly restored from 4K scans of the original camera negatives as well as 2K scans of the interpositive elements, Jivaro is stunning in 3-D! 3-D Film Archive has delivered yet another incredible restoration effort that is an absolute marvel to see in three-dimensions. The film was a rare example of using an adjustable 3-D camera system rather than a fixed setup allowing the image to adjust to objects in the foreground, middle ground, and background. The results create an easier three-dimensional experience on the eyes while creating a huge canvas for the action to take place on with every object occupying unique space along the Z-Axis.

What's great about this 3-D experience is how well it manages the gimmicky out-of-picture effects - whether it be a fist, shrunken head, or spear - the effect is terrific without ghosting or causing any eyestrain. The establishing shot of the village Rio's Trading Post is located is an interesting example where the static wide-shot has people moving around the background with an optically added building roof sticks out in the foreground - and the image is seamless! Another great moment is when Rio, Alice and the rest of the rescue party make their way into the Amazon with the leafy jungle set creating a beautiful three-dimensional vista with plenty of object spacing throughout the frame.

The restored elements are also in great shape. Aside from a brief vertical scratch and very sporadic speckling that's hardly even noticeable, the image looks clean of any serious debris. Details are crisp giving fine facial features, clothing, makeup, and the impressive set design work plenty of room to shine. Film grain is apparent but stable and never intrusive - even in 3-D. Colors are bold and robust with strong red, blue, and yellow primaries saturating much of the image while the green jungle is rich and vibrant. Black levels are also on point without any crush issues to report. The only image oddity arrives during some brief stock image shots that become instantly noticeably flat. But the shots are so quick that the effect isn't that jarring from flat to 3-D and there isn't any eyestrain or visual side-effects. At the end of the day, this is another incredible piece of work from 3-D Film Archive. Every classic, shot-on-film 3D film needs to be handed over to them - each release just gets better and better. 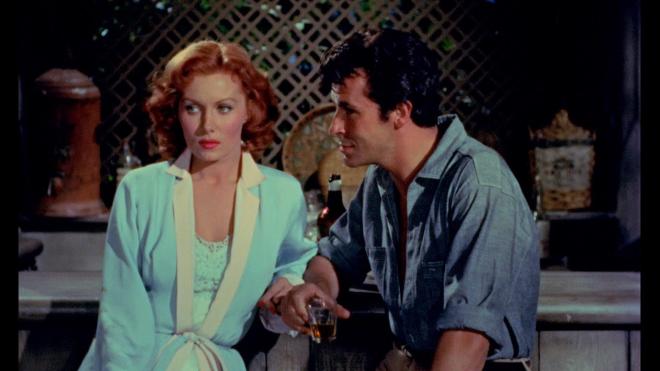 Packed with an English DTS-HD MA 2.0, the audio mix is strong, but can be a bit unremarkable outside of basic highlights. Dialogue exchanges are clean and clear which is important because so much of the front end of the film is very conversation-focused. Action scenes come with some punch and pizzaz but sound effects don't quite come alive. They're a bit canned and static feeling at times. Weather effects do punch things up nicely, there's a nice thunderstorm sequence and later in the movie when the rescue party has to cross a river along a decaying rope bridge that gives some sonic delights. Where I'm a bit soft feeling towards this mix is that it's just not very dynamic in atmospherics. The elements have their place, but locations don't arrive with a sense of place or space. But really that's a small gripe when everything else works so well. 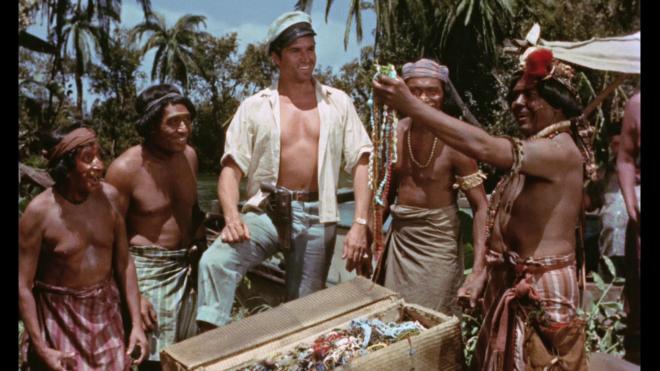 Jivaro 3-D may not offer a huge selection of bonus features, but what they lack in quantity they make up for in quality. The principal bonus feature is the Audio Commentary featuring Film Historians Jack Theakston, Hillary Hess covers the production details and the reception of the film while Mike Ballew and Greg Kintz of 3-D Film Archive segue into the track for a bit to talk about the extensive restoration work. It's a fantastic listen, full of great information about the film itself but then the work that it took to bring it back to its full 3-D glory. The other great but brief feature is the Shot by Shot Stereoscopic Analysis. 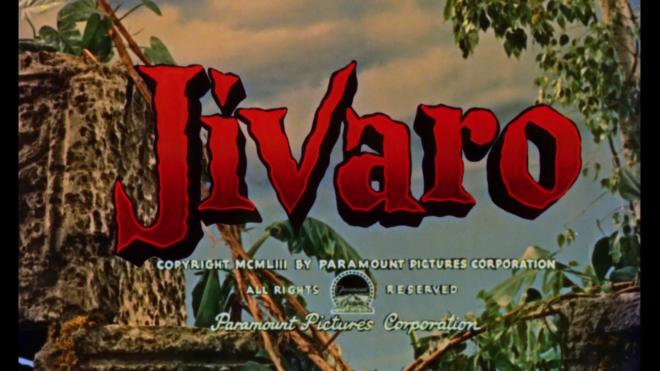 If you're one of those devotees of 3D Blu-ray - Jivaro 3-D is another essential title to add to the collection. The film is a classic-styled adventure film complete with the attractive cast Fernando Lamas and Rhonda Fleming, exotic location, sultry romance, and great action. At just 92-minutes the film never overstays its welcome and keeps you entertained from start to finish - and it's all the better in 3-D!

Kino Lorber Studio Classics teams with 3-D Film Archive to give fans another incredible 3D Blu-ray release. The image is in great shape and the 3-D effects are damn impressive with a great sense of depth. The audio mix gets the job done and the bonus audio commentary track is exhaustive and informative. Fans of three-dimensional entertainment will absolutely want to pick this one up. Highly Recommended.