Period costumes, southern heat, political intrigue, the plague, and sultry romance courtesy of stars Fernando Lamas and Arlene Dahl give three-dimensional life to Sangaree. The story of an indentured servant's son prospering in the post-revolution south may be the makings of a paperback romance plot, but the film's energy, colorful use of 3-D, and the great cast turn an average romance drama into something worth watching and is a lot of fun in 3-D. Kino Lorber Studio Classics brings Sangaree to Blu-ray with an amazing restoration by the team at 3-D Film Archive. The transfer breathes new life into the first Technicolor 3-D film with striking colors and terrific 3-D effects with a great audio mix to match. Fans of vintage 3-D have a new disc to show off to friends with Sangaree. Highly Recommended.

"Alright, let me give you something good to report."

The son of a Spanish indentured servant, Dr. Carlos Morales (Fernando Lamas) has risen in southern societal ranks after the Revolutionary War thanks to his benefactor General Victor Darby (Lester Matthews). Fearing the powerful influence of outside interests, the ailing Darby bequeaths his holdings to his adopted son. Carlos is entrusted to manage the Darby Company and its vast wealth against the wishes of Victor's daughter Nancy (Arlene Dahl) who has run the Sangaree plantation throughout the war. Upon arriving in Savannah to oversee his duties, Carlos must navigate the local politics, nefarious outsiders, plague, and the fiery passion he has for Nancy.

On the surface of things, Sangaree has a very simple plot fitting within the tried and true mold of a costume period drama. If the novel it was based upon was published today, one could only imagine the cover artwork to prominently feature a bare-chested virile male posing with a languid sultry damsel in a flowing dress. In point of fact, the scene on the boat where Arlene Dahl and Fernando Lamas first meet is precariously close to making that simple pinup image a reality. Thankfully, the film finds a dramatic footing and keeps the story focused on Lamas' Carlos and his struggles to navigate a society that looks down on him as a lesser man simply for the station he was born into. 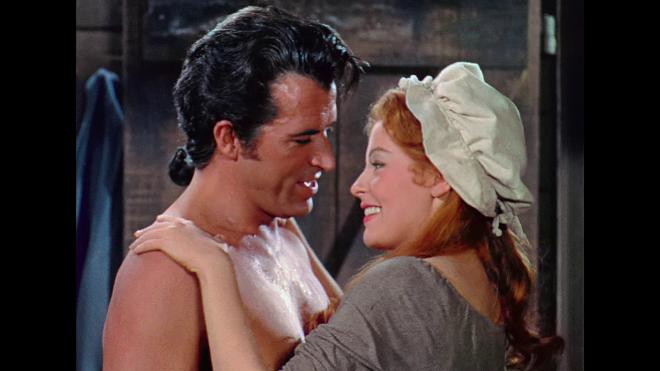 In truth, Sangaree had all of the makings of a run-of-the-mill B-Movie plot, but in the hands of director Edward Ludwig, the film earns a few extra ounces of credibility. While some pains are made to showcase Lamas' rugged physique, the film doesn't sidestep or shortcut a genuine plot. There aren't any delusions that Carlos and Nancy will one day figure out they're gaga for each other but the film doesn't bog itself down into too much melodrama. They let outside plot threads weave in and command the characters' attention.

There's plenty of other actionable qualities to keep the characters apart from each other without it feeling like the filmmakers are smashing a square peg through a round hole. A nice side plot about piracy and a rival Georga family comes together to keep a little bit of mystery about the film so as we're not reduced to watching lusty languid romantics between two attractive people. One shouldn't doubt the legitimacy of the romantic tension between Lamas and Dahl as the pair would wed soon after the film finished shooting. Some great action set pieces and a smart use of three-dimensional staging keeps Sangaree from sinking into the swamp of mediocrity. It certainly isn't Gone With The Wind, but the film holds its own and proves to be very entertaining.

Sangaree is brought to 3-D Blu-ray courtesy of Kino Lorber Studio Classics with a fresh restoration by 3-D Film Archive. Pressed onto a Region A BD-50 disc, the disc is housed in a standard sturdy Blu-ray case. The disc loads directly to a static image main menu with traditional navigation options. If you're fully 3-D ready the disc should default to 3-D without having to select that as a viewing option. 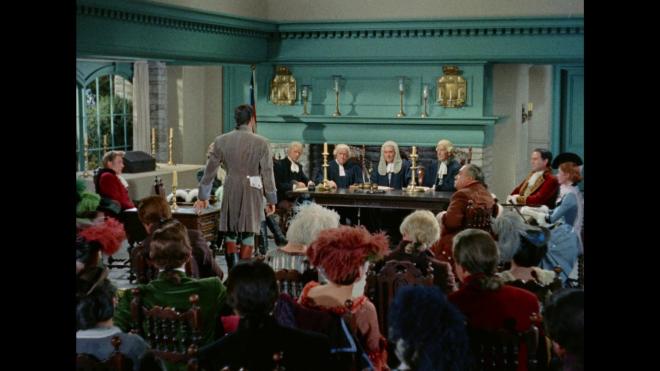 A couple months prior to this 3-D Blu-ray release of Sangaree, I was discussing the restoration of the film with the folks at 3-D Film Archive and it sounds as if they had their work cut out for them. Everything from badly damaged elements to severe intermittent color fading on both the left and right strips was just a couple of the issues they had to deal with. They shared with me the following image to articulate the point: 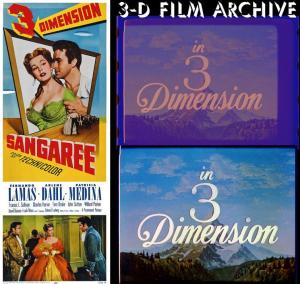 It's with some measure of equal parts joy and relief that this 1080p 1.33:1 3-D restoration effort is another masterful triumph for the 3-D Film Archive team. Sangaree was the first 3-D feature film processed and printed in Technicolor and it looks gorgeous. Colors are lush and vivid and leap off the screen - in addition to the impressive three-dimensional effects. Reds and yellows are stunning but the prominent bright and bold indigo blues really catch the eye. Flesh tones are accurate and healthy so all of the performers look great.

Film grain is present throughout but is nicely resolved so as not to be too intrusive or distracting. There are a few moments where grain does become a bit thick, but these are very brief usually around the frames accompanying an optical transition. 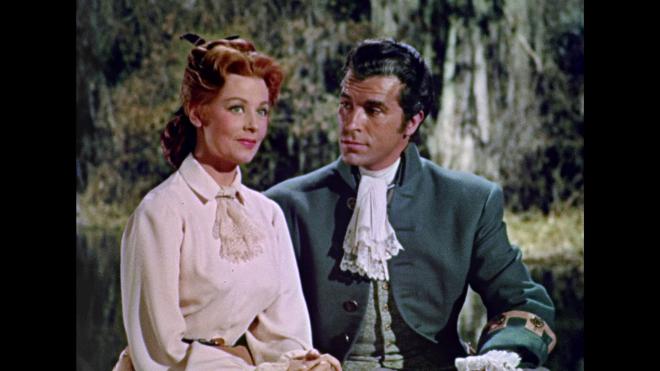 Interestingly enough, Sangaree was not originally intended to be a 3-D feature. In fact, it was ten days into filming before it was shut down and restarted with 3-D cameras. So it's to that point that I'm actually a bit awestruck at how effective the 3-D photography is considering by all accounts it was a literal afterthought. The camera maintains a steady presence to allow for a great sense of foreground and background depth along the Z-Axis without any irritating eyestrain or ghosting effects. Even simple setups offer a great sense of depth with several "out-of-the-screen" effects. A knife throw is a particularly effective gimmick shot. Another sequence where a mob of people with burning torches runs towards the screen is another well done moment as is a bar fight in the middle of the film where chairs, barrels of beer, and broken tables burst towards the screen. While there are a handful of gimmicky elements, much of the film is focused on creating the deep "window into a world" sort of 3-D effect that makes the image feel natural and realistic.

Considering the image was sourced from 4K scans of the original negative and 2K scans of the interpositive and the previously mentioned color fading issues, I'm happy to report there is little distracting damage present. There are a few patches of speckling and a handful of brief moments where some slight vertical scratches appear, but they're not very severe or disorientating and don't negatively impact the 3-D experience. At the end of the day, this is a beautiful image and the effective 3-D presentation is terrific. Vintage 3-D fans have a lot to be excited about with this release. 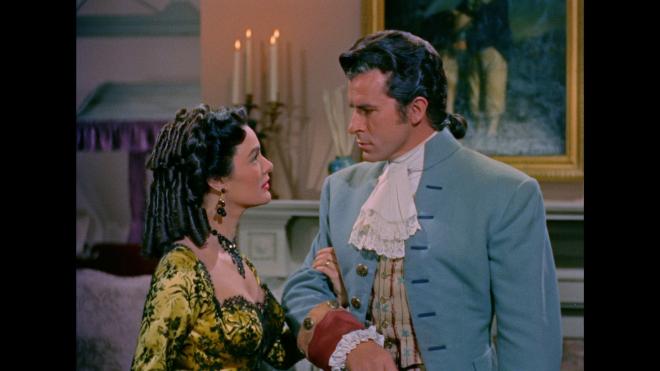 Sangaree arrives with a strong DTS-HD MA 1.0 mono track. Dialogue, sound effects, and the great score by Lucien Cailliet offer up a terrific soundscape. Even in mono, there is an effective sense of depth and imaging to the sound elements. The bar fight sequence or the mob at the end outside the warehouse are auditory high marks where there is a lot of activity all at once that comes through clearly without any distortion or loss. Free of any notable instances of hiss or pops, the audio is clean and clear and lends itself perfectly to this film. 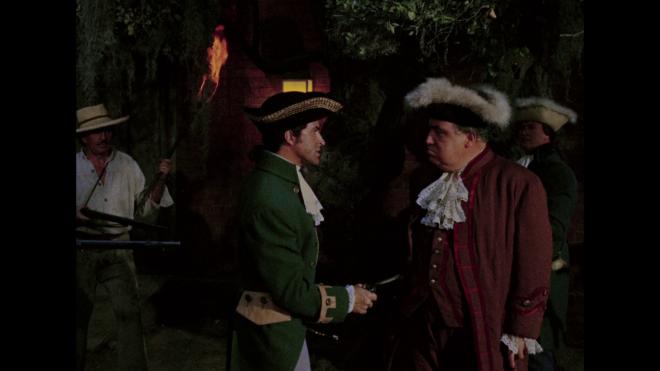 The supplemental package for Sangaree many not be the most robust, but the content is certainly appreciable. In addition to the great Radio Theater adaptation, the Before/After restoration video is a much watch if only to have an appreciation for the amount of work that goes into restoring a film like this. 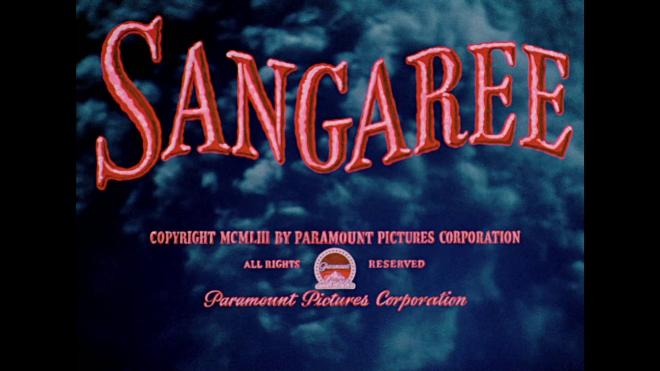 In truth, I didn't expect all that much from Sangaree - at least on the story front. At first glance, it would appear to be a simple B-Movie romance, but thankfully some smart story elements and side plots keep the action cooking while allowing the audience to appreciate the real-life romantic sparks between Fernando Lamas and Arlene Dahl. It's not the most complicated film ever made, but it is a lot of fun made even more entertaining with terrific 3-D cinematography. Kino Lorber Studio Classics and 3-D Film Archive bring Sangaree to 3-D Blu-ray with a fantastic newly restored transfer, a great audio track, and a handful of worthwhile extras to round out the bonus feature package. Fans of vintage 3-D films have another great release to add to the collection. Highly Recommended.

Sale Price 85
Buy Now
3rd Party 85
In Stock.
See what people are saying about this story or others
See Comments in Forum
Previous Next
Pre-Orders
Tomorrow's latest releases