Those Redheads from Seattle - 3D

Historically significant as the first widescreen production from Paramount Studios, Redheads has not been seen in 1.66:1 for more than sixty years. Meticulously restored from 35mm elements by Greg Kintz and the 3-D Film Archive, "3-D's big musical gal-stacked frolic" will be an outstanding addition to your classic 3-D Blu-ray collection.

The fun of going to the movies is seeing a show. While it's good to enjoy some gritty realism, every once in a while it's nice to just go for some pure colorful and musically-driven eye-popping escapism. 1953's Those Redheads From Seattle is just that sort of undemanding but entertaining sort of picture. Produced in the heyday of 3-D, Those Redheads From Seattle offers up a simple enough story, some catchy tunes, terrific 3-D antics, and provides an interestingly subtle commentary on modern feminism.

The Yukon Gold Rush is in full swing and boomtowns like Dawson City are sprouting up all over the territory. Where there is money to be made, vice and morals will collide. On one side of town, there's saloon and casino owner Johnny Kisco (Gene Barry) playing to the base interests of the citizenry. On the other side of the town, there's newspaper man Vance Edmonds (Frank Wilcox) fighting for the moral center of his neighbors. After publishing a series of scathing editorials in his paper, Vance is shot by Kisco's casino manager the cowardly Mike Yurkil (John Kellogg) because his own past criminal dealings were about to be exposed.

When Vance Edmond's wife (Agnes Moorehead) and their four daughters Kathie (Rhonda Fleming), Pat (Teresa Brewer), Connie, and Nell (The Bell Sisters Cynthia and Kay) arrive in town, Johnny faces a crisis of conscience. He feels responsible for the death of a good man like Vance. At the same time, he's madly in love with Kathie and the thought of them finding out that his employee killed the head of their family forces him to remain silent. To try and make amends, Johnny undertakes a series of intricate gestures to keep the family afloat financially. But when his dark secret is exposed and Kathie turns against him using her father's newspaper, the only way to make things right is for Johnny to bring Mike Yurkil to justice - even if he never wins back the love of Kathie.

Dramatically speaking, Those Redheads From Seattle may not be the greatest film ever made. The plot is fairly simple and much of the dramatic tensions within the Edmonds family as well as the conflict between Johnny and Kathie could be sorted out with a simple rational conversation. That said, this is still a darn fun way to burn 90-minutes of your evening. Director Lewis R. Foster and his co-writers Geoffrey Holmes and George Worthing Yates manage to craft a simple story that is compelling enough to invest your interest in the characters while also keeping the pace swift, the tone light, and the song and dance numbers engaging.

In previous Blu-ray disc reviews, I've noted that with few exceptions I'm not overly fond of musicals. I get tired of incessant singing when a simple conversation would move things along more efficiently. To that point, Those Redheads From Seattle is a musically-driven film without actually being a traditional musical. The song and dance numbers feel like they're a part of the story rather than a pause in the action. Since the Edmonds sisters are all singers and musicians and Johnny's club features chorus girls, there's actual motivation for the singing and dancing. And when the song is done, the film gets on with the plot and moves forward.

While the film doesn't make a specific point about feminism, the themes still manage to resonate. On one hand, we have Rhonda Fleming's Kathie, who stands as the sort of strong-willed woman who won't let convention keep her from restoring her father's newspaper. She uses her mind and skills to provide a living while also fighting for a just cause. On the other hand, we have Kathie's sister Pat played by Teresa Brewer. She's far more sexually independent than the other women of her family and she has no trouble singing and dancing in Johnny's club because that's what she's good at and enjoys doing. It falls in line with the ideological battles between Betty Friedan and Helen Gurley Brown without overstating things. They're sisters working towards the same end goal through two different paths. Again, it's not a major theme of the film, but I found the character dynamics interesting.

While the story itself may not be the most impressive, Those Redheads From Seattle does stand as an important piece of cinematic history. On top of being the first 3-D musical ever produced, this film is also the first 3-D widescreen feature released by Paramount Pictures. To that end, the film is a visual delight. The technicolor offers up a rich primary pallet while the 3-D adds an incredible amount of foreground and background depth while kicking up the fun of the film. There's always something to look at and enjoy and the 3-D restoration work performed by 3-D Film Archive ensures there is never any eyestrain to endure. It's just a good fun ride with great visual flair and a fun story. Those in the mood for a lighthearted good time will find plenty to enjoy with Those Redheads From Seattle.

Those Redheads From Seattle arrives on Blu-ray courtesy of Kino Lorber and their Studio Classics label. Both the restored 3-D and 2-D presentations are pressed onto a Region A BD-50 disc. The disc is housed in a standard sturdy Blu-ray case and comes with a booklet containing cover artwork for recent and past Kino Lorber Studio Classics' releases. The disc loads directly to a static image main menu featuring traditional navigation options. 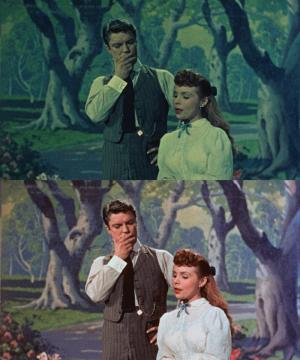 As far as the final results go, I'm damned impressed with this 1.66:1 1080p 3-D transfer. Just looking at the elements you can tell that the restoration effort was an uphill battle. Detail levels are overall very strong. Some moments look better than others but for where it counts in close-ups, middle shots, and some of the establishing shots look terrific. Clothing, facial features and makeup, and the production design work look great. Clarity may be a little too good in a couple places where you can clearly see the backdrop scenery curtain billow ever so slightly. Colors enjoy that rich primary-heavy pop with bright reds, blues, and yellows. Flesh tones have that wonderful rosy hue to them. Black levels are also very strong aiding the terrific sense of depth. The 2-D presentation is fine if flat viewing is your thing, but the film really does come to life in 3-D.

There are numerous scenes where the cast will frequently make use of the space of the room to walk from a deep background into the foreground and back again. Scenes in Johnny's club are cluttered with people and objects occupying every nook and cranny. Depth along the Z-Axis is terrific with plenty of deep background moments and numerous pop-out-of-the-screen bits to keep the 3-D photography by cinematographer Lionel Lindon engaging without causing painful eyestrain. That said, considering the wear and tear this film endured over the years, this isn't a completely flawless presentation. Speckling has been mitigated, jitter removed, and 3-D alignment issues fixed, but some color shifts do remain. Saturation can shift shot-to-shot within a given scene. It's noticeable, there's no denying that, but it isn't so distracting as to ruin the experience or the 3-D presentation. Like their previous releases over the past few years, Those Redheads From Seattle is yet another terrific vintage 3-D restoration from 3-D Film Archive. Fans should be very pleased to see the results on their home 3-D screens.

Those Redheads From Seattle was originally released in three-channel stereo sound. Unfortunately, the original three-channel tracks were lost decades ago, but the restoration team at 3-D Film Archive have done a bang-up job replicating the experience. The English DTS-HD MA 3.0 track sounds fantastic capturing all of the dialogue, hustle-and-bustle of a boom town, and the song and dance numbers beautifully. Vocals sound crisp and lively while sound effects, background elements, and the music by Sidney Cutner and Leo Shuken work to create a sense of rich atmosphere and space. Imaging is terrific as there is constant movement between the left, center, and right channels. Levels are also spot on as there is never any call for adjusting volume. An English DTS-HD 2.0 mono track has also been provided, and it is pretty good, but the 3.0 mix is the clear and audible winner in my opinion.

There is a terrific amount of bonus features assembled for this release. The Audio Commentary is a terrific listen, the interview with Rhonda Fleming is great, and the Before/After Restoration demo is terrific material to pick through.

Those Redheads From Seattle may not be the greatest musical to come out of Hollywood during the 1950s, but it certainly is an entertaining one. As a piece of film history, it's wonderful to see the film fully restored to its former 3-D glory. 3-D Film Archive together with Kino Lorber Studio Classics have brought another amazing vintage 3-D film to disc. With a terrific 3-D image transfer, an absolutely stellar audio presentation, and a fine assortment of bonus features, vintage 3-D film fans have a great reason to dust off their 3-D glasses with this Blu-ray release of Those Redheads From Seattle. Recommended.