What do Russian playwright Anton Chekhov and a salacious scandal from Hollywood’s Golden Age have in common? Not much. Which makes writer-director Woody Allen’s decision to marry them up in the intimate drama September so puzzling. The delicate tale of deep-seeded family strife and myriad romantic entanglements that reach a fever pitch during a turbulent late-summer weekend at a Vermont country house combines elements of Chekhov’s Uncle Vanya with an all-too-obvious nod to the cause célèbre that engulfed movie star Lana Turner and her teenage daughter Cheryl Crane after Lana’s abusive gangster lover Johnny Stompanato was brutally killed in their home. Oil and water mix together better than these two disparate subjects, and though Allen valiantly tries to sew them together, the stitches are rough and uneven.

Much like Allen’s previous A Midsummer Night’s Sex Comedy (but without the comedy), September takes place at an isolated rural home and chronicles the romantic roundelay between a small group of maladjusted adults who blindly the follow the fickle whims of their underfed libidos. Lane (Mia Farrow), the emotionally fragile daughter of faded film actress Diane (Elaine Stritch), tries to regain control of her life after a failed suicide attempt. Floating in the breeze without direction or ambition, she looks for love to cure her ills and harbors feelings for Peter (Sam Waterston), a frustrated novelist who lives nearby. Though Peter doesn’t discourage her attentions, he lusts after Lane’s best friend Stephanie (Dianne Wiest), who is taking a break from her unhappy marriage to help Lane get back on track.

Stephanie, who's indecisive about her future and bound by the loyalty she feels toward both her family and unstable friend, rejects Peter’s advances, but he remains undeterred and continues to vigorously pursue her. Meanwhile, Howard (Denholm Elliott), a local, mild-mannered French teacher, quietly pines after Lane, whose infatuation with Peter prevents her from opening her heart to him. Amid all these fractured liaisons, the loud, tactless Diane, accompanied by her latest husband Lloyd (Jack Weston), approaches Peter to write her biography, much to the horror of Lane, who recoils at the prospect of reliving the soul-crushing events of her youth. Yet Diane doesn’t respect Lane's feelings, and as their increasingly strained relationship reaches its breaking point, shocking truths are revealed, friendships are tested, and epiphanies occur.

While September fulfills Allen’s long-held wish of filming a small ensemble drama in the manner of a stage play, this exercise in self-indulgence often feels artificial, thanks in part to formal, preciously constructed dialogue that distances us from the already aloof characters. Allen fashions a stifling sense of claustrophobia that successfully ramps up tension between the confined housemates, but the cramped single location often constricts the camera, resulting in static, uninteresting shots that lack any lyrical grace. After a while, I longed to escape the breathless, stuffy atmosphere and insufferable characters, who seem more self-centered, aimless, and neurotic than most Allen creations. Though I initially sympathized with their predicaments, to paraphrase a more famous movie, the problems of these six little people don’t amount to a hill of beans in this crazy world...and before the end of the movie - right around the time the ludicrous Lana Turner subplot grabs the spotlight - I lost interest in them.

Why Allen felt the need to make such a gossipy morsel the focal point of the drama’s last act befuddles me. If he wanted to stir up dust between a vain, egocentric Hollywood actress and her repressed, neglected daughter, Allen could have devised any number of situations that would far more believably pit them against each other. Why dredge up this notorious case and insert it into a quiet, introspective drama where it seems woefully out of place?

September must have befuddled Allen, too, because he filmed the screenplay twice before releasing it. (And he admitted in an interview a few years ago he’d film it a third time in a heartbeat if allowed.) In the first version, Sam Shepard played Peter, Maureen O’Sullivan (Farrow’s real-life mother) acted the part of Diane, and Charles Durning portrayed Howard, but the results didn’t satisfy Allen, who tinkered with the script, recast a few roles, and shot the whole damn thing over again.

It still doesn’t quite work, and yet this bizarre chamber piece is often fascinating to watch. It’s always fun to see how Allen’s cream-of-the-crop, all-star casts interact, and the stellar group he’s assembled here doesn’t disappoint. Farrow is a bit too mopey and whiny for my taste, despite her character’s severely depressed state, but the always wonderful Wiest, who wages a tough internal war as she balances her attraction to Peter with her consideration of Lane and her own marital responsibilities, crafts a captivating, dimensional portrayal. Waterston, Weston, and Elliott all contribute fine work, but like Tennessee Williams, Allen favors his female characters, and he gives Stritch quite a gift. Bawdy, brassy, and strangely lovable, Diane is a rich role and Stritch embraces all of its conflicting, larger-than-life elements. She may not be the world’s best actress, but Stritch always steals the focus of any scene in which she appears, and her participation in September only makes us wish Allen had used her in more of his films.

A poor man’s Interiors, September tries too hard to create drama where none exists, then goes for a big payoff that doesn’t pack the expected punch. Well-played moments abound, but they can’t salvage a tedious screenplay that wallows in angst and ennui, and in the end doesn’t really go anywhere. As a curio, September is intriguing, but despite its strong cast and performances, it remains a second tier Allen film. 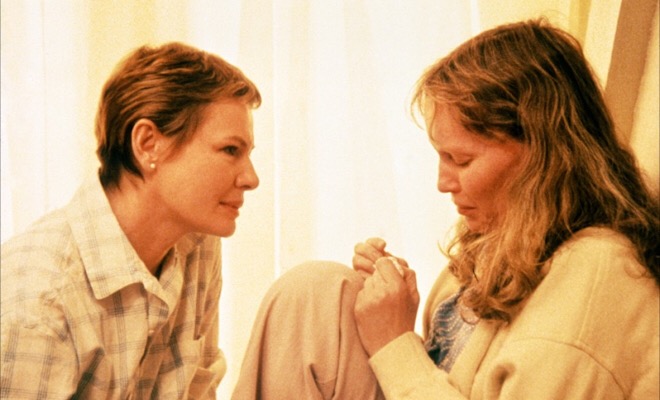 September arrives on Blu-ray in a limited to 3,000 edition packaged in a standard clear case. An eight-page booklet featuring an essay by writer Julie Kirgo, three full-color scene stills, and a reproduction of the movie’s poster art is tucked inside the front cover. Video codec is 1080p/AVC MPEG-4 and audio is DTS-HD Master Audio 1.0. Once the disc is inserted into the player, the static menu without music immediately pops up; no previews or promos precede it.

The warm glow of late summer continually floods the frame, adding fuel to the intimate encounters that drive the narrative, and this 1080p/AVC MPEG-4 transfer renders those earthy tones well as it nicely honors Carlo Di Palma’s lush cinematography. Contrast and clarity are quite good, and though grain is evident, it lends the picture a lovely film-like feel. Colors are somewhat muted and often exude a golden tint, but flesh tones remain natural and stable throughout and close-ups beautifully highlight Wiest’s creamy complexion, the wrinkles in Stritch’s weathered face, and Farrow’s tears. Black levels are rich enough, whites are bright, and shadow delineation is fine, but some print damage is evident, especially during the brief blackout sequence, which is plagued by obvious and distracting white marks and scratches. Some shots also look a bit soft, but not enough to be jarring. All in all, this is a solid transfer, but a few restorative tweaks would make it really sing.

Because the movie resembles a stage play, the audio springs entirely from the action on the cramped interior set. So aside from footsteps, some incidental piano music, a smattering of vinyl jazz on the stereo, and isolated bits of business, the DTS-HD Master Audio 1.0 track focuses entirely on dialogue. All the conversations are clear, comprehendible, and well prioritized, even when whispered, and the delicate music sounds natural. Distortion is never an issue and no age-related hiss, pops, or crackles mar the mix. Audio has never been a major concern of Allen’s, and while this competent track performs well, it reflects his indifference.

The only extras are exclusive to this Blu-ray release (see below).

September is a noble experiment, but this overwrought drama of personal entanglements populated by an array of insufferable characters isn’t one of Woody Allen’s stronger efforts. Though some powerful moments perk up the dreary proceedings, the unfocused script often feels too precious and forced. A top-flight cast led by Mia Farrow, Dianne Wiest, Sam Waterston, and Elaine Stritch elevates the material, but even their yeoman efforts can’t salvage it. Twilight Time’s Blu-ray presentation is practically devoid of extras (typical for an Allen home video release), but features decent enough audio and video transfers. If you’re an Allen fan, September is certainly worth a look, but only diehard devotees will want to add this title to their collection.