Writer-director Woody Allen’s first full-throated venture into drama, Interiors (1978), presents us with a compelling, always entertaining look at a dysfunctional family dominated by the controlling madness of its matriarch, Eve (Geraldine Page). Her reluctant husband (E.G. Marshall) and their three daughters (Diane Keaton, Mary Beth Hurt, Kristin Griffith) make doomed efforts to cope with Eve’s demands, while also trying to get on with their own lives; Richard Jordan and Sam Waterston play significant others also caught in Eve’s web. But all bets are off when an ebullient stranger (Maureen Stapleton) enters the picture.

After Annie Hall won multiple Oscars in 1977, Woody Allen - in what could only be described as a risky and reckless move - decided to buck the comic films that made him a household name and mount an intimate drama that would honor Swedish director Ingmar Bergman in style and Russian playwright Anton Chekhov in content. The result was Interiors, a strangely absorbing, morbidly fascinating portrait of tortured family relationships and romantic ennui that both surprised and puzzled Allen's fans, many of whom were unprepared for such a drastic departure. While some embraced and championed the writer-director's artistic growth, others condemned what they believed to be his foolish egotism. Strikingly, Allen himself harbors mixed feelings about Interiors, at one time quipping the screenplay resembles Long Day's Journey Into Night one minute and Edge of Night the next, as it walks a tenuous tightrope between poetry and soap opera.

And yet its brilliance cannot be denied. Impeccably crafted, beautifully shot, and featuring fantastic performances by a tight ensemble cast, Interiors is far more than a random experiment. Allen doesn't just dabble in drama, he attacks it head-on, exploring its nuances and exposing its teeth. Sure, some of the film is overly precious and a bit pretentious (but then again, how many Allen movies aren't?), but those qualities are reflected in his erudite characters, whose self-absorption and incessant soul-searching are both compelling and insufferable. We may not know a family exactly like the one Allen depicts on screen, but it's impossible not to see elements of them in ourselves. And it's that identification that makes the film resonate, despite its occasional missteps.

Inspired by Chekhov's The Three Sisters, Interiors examines the searing interpersonal dynamics of an upper-crust New York family. Eve (Geraldine Page), the matriarch, is recovering from the nervous breakdown she suffered after her stoic husband of 30-plus years, Arthur (E.G. Marshall), suddenly announces his intention to leave her, claiming he's fulfilled his duty as spouse, parent, and provider and now wants to live by himself. The break-up shatters Eve, a reserved, distant perfectionist whose "beautifully furnished rooms" and "carefully designed interiors" mirror her controlling nature and emotional detachment. Fragile and unstable, she remains foolishly optimistic she and Arthur will one day reconcile, much to the frustration of two of their daughters, Renata (Diane Keaton) and Joey (Mary Beth Hurt), both of whom try to prop up her spirits without deluding her. Yet their simmering sibling rivalry frequently bubbles over and causes additional strife.

Renata is a successful, neurotic poet who's losing patience with both Frederick (Richard Jordan), her insecure novelist husband who feels inferior to and emasculated by her, and their unfulfilling family life, while the aimless, bitter Joey flits from job to job in a feeble attempt to find her niche. Joey's boyfriend Mike (Sam Waterston) consistently encourages her, but she prefers to wallow in her ineptitude. The third daughter, Flyn (Kristin Griffith), is a beautiful, superficial Hollywood actress who jets in for special occasions and tries to keep herself out of the wrenching squabbles that consume everyone else like quicksand. Their collective journey to terra firma, however, hits a snag with the surprise arrival of Arthur's new lady friend, whose mere presence upsets the family's (very) delicate balance. Pearl (Maureen Stapleton), a warm, earthy middle-aged woman who dotes on Arthur like a mother hen, is like a breath of fresh air, but her plain talk and lack of pretense rankle Arthur's stuffy daughters, who label her vulgar and crass. Nevertheless, Arthur forges ahead with his plans to marry her, but first, he must break the news to the oblivious Eve, who teeters on the brink of another mental collapse.

Cheery stuff, huh? Though the depressing nature of Interiors may turn off plenty of potential viewers, it can't negate the film's artistry. Allen, who received a Best Director Oscar nod, telegraphs the movie's serious nature right off the bat with his typical white-letters-against-a-black-backdrop title sequence, but instead of bouncy jazz music, absolute and foreboding silence accompanies the credits. Then the homage to Bergman begins, but Allen executes the tribute with a keen eye and boundless respect. The blank white walls, minimalist sets, muted palette, and whisper-quiet sound design all reflect the characters' emptiness and inability to confront and express their feelings. And when the tension breaks, jarring bursts of loud audio crash through the calm, startling us with their intensity.

Isolation, self-doubt, and narcissism consume Renata, Joey, Eve, and Frederick, all of whom flounder in personal hells they can't or refuse to escape. And all of them cry out for help in different ways. When Arthur rebels and declares his independence, he too seems selfish at first, but his decision to try and embrace life - even at a late stage - instead of continually keeping it at arm's length is both brave and admirable. Pearl fuels that liberation, and her joyous abandon (in contrast to Eve's withering constriction) and boldly colored clothes (in contrast to Eve's pallid beige tones) combat the prevailing drabness and denote her vitality and passion, elements the rest of the tightly-wound family rejected long ago.

Unlike Allen's other serious films, Interiors has zero humor. The characters take themselves far too seriously and Allen seems far too preoccupied with divorcing himself from his past work to insert even the mildest joke. (Interiors also marks the first time Allen did not appear in a picture he also directed.) Though the Oscar-nominated script is unrelentingly sad, occasionally overwrought, and packed with angst, it brims with literacy and lyricism. Nobody - nobody - writes dialogue like Woody Allen, and his ability to get into his characters' psyches and concisely convey their frailties allows him to tell powerful stories in an efficient manner.

Of course, great actors make his words come alive, and here Allen assembles one of his most accomplished casts. Page is mesmerizing, heartbreaking, and appropriately exasperating as Eve, crafting a portrayal that's at once rigid and tremulous. Stapleton's Pearl is her polar opposite - free and easy, comfortable in her own skin, and refreshingly blunt - and her performance is natural and deeply affecting. Both women earned well-deserved Oscar nominations (Page for Best Actress, Stapleton for Best Supporting Actress), but Hurt, as the spoiled, resentful Joey, is also stunning in her feature film debut. Keaton shines as well in a tough role that's largely devoid of sympathy, as do Marshall, Waterston, and Jordan. But as usual, Allen's male characters are far less interesting than his women, who rightfully grab the film's focus and rarely relinquish it.

No doubt about it, Interiors is a hard film to watch. And for that very reason, some of Allen's most ardent admirers have steered clear of it. Its inherent and often oppressive grimness may diminish its appeal, but this devastating family drama yields many rewards. The characters may not be likable and the themes may not be pleasant, but they're incisive and relatable, and the direction, script, production design, photography, and performances perfectly complement them. And that's why, once seen, Interiors is so difficult to forget. 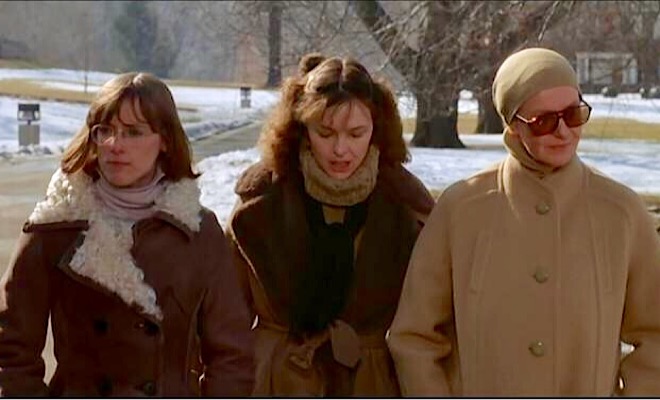 Interiors arrives on Blu-ray packaged in a standard case. An eight-page booklet featuring an essay by film historian Julie Kirgo, full-color scene stills, and a reproduction of the movie's poster art is tucked inside the front cover. Video codec is 1080p/AVC MPEG-4 and audio is DTS-HD Master Audio 1.0. Once the disc is inserted into the player, the static menu without music immediately pops up; no previews or promos precede it.

Arguably Allen's starkest film from a visual standpoint, Interiors keeps the frame largely dull and bare, but that doesn't stop this 1080p/AVC MPEG-4 transfer from maximizing the impact of Gordon Willis' understated cinematography. Though muted tones predominate throughout most of the movie, bursts of vibrant color (mostly red) punctuate the screen whenever Maureen Stapleton appears. The blank white walls are appropriately cold and crisp, solid black levels lend weight to the image, and flesh tones remain natural and stable throughout. Faint grain - which is a tad more noticeable in low-lit scenes - adds texture to the picture and preserves the feel of film, and sharp close-ups beautifully highlight the stressful creases on all of the careworn faces. Print damage (in the form of specks and a few small blotches) is evident but not consistent, and no digital issues crop up. Interiors is far from a visually dazzling film, but this low-key transfer accurately reflects the story's somber mood and grabs our attention when necessary.

Interiors is a very quiet film, yet effective bursts of jarring sound disrupt the tense silences that pervade many scenes. The DTS-HD Master Audio 1.0 track handles those wild shifts with ease, the most notable of which are the application of duct tape to window seams and smashing of prayer candles in a church. Because the atmosphere is so subdued, nuances play a major role, and such subtleties as the ocean tide lapping against the shore, city traffic, creaking floor boards, and the crinkling of paper are marvelously distinct. Dialogue, of course, is the premier element in any Woody Allen film, and all the impeccably crafted exchanges, emotional musings, and strident bickering are clear and easy to comprehend. Allen employs music in only one scene, but the boisterous jazz strains exude a welcome brightness of tone. No distortion creeps into the mix, and only a faint bit of hiss could be detected during some of the most sedate moments. Audio is never the centerpiece of Allen's works, but this fine minimalist effort just might be the little track that could.

The only supplement is a three-minute theatrical trailer that includes several laudatory review clips from critics, as well as a number of intense moments from the film.

Fraught with raw emotion and guilt galore, Interiors examines the simmering rivalries, neuroses, and self-absorption that consume and rip apart a well-to-do New York family. It's not cheery stuff - in fact, it's probably one of the most depressing films ever made - yet Woody Allen's incisive script and direction, along with a gallery of memorable performances, make this portrait of anguish and soul searching riveting from start to finish. Solid video and audio transfers distinguish Twilight Time's limited edition Blu-ray release, which at long last revives this wrenching artistic triumph. Highly recommended.