Overview -
Woody Allen’s whimsical confection, A Midsummer Night’s Sex Comedy (1982), is a period-style romantic roundelay set in and around a stunning—and possibly magical—country house. The film focuses on a nutty inventor (Allen), his frustrated wife (Mary Steenburgen), a philosopher cousin (Jose Ferrer), his much younger fiancée (Mia Farrow, making her first appearance in an Allen film), a randy doctor (Tony Roberts), and a free-thinking nurse (Julie Hagerty) – the possibilities, of course, are endless.  Gorgeously shot by the great Gordon Willis.
OVERALL
Worth a Look

By virtue of its title, one might assume Woody Allen's 'A Midsummer Night's Sex Comedy' owes a tip of the hat to William Shakespeare, but although this frothy romantic romp contains a couple of magical and mystical elements reminiscent of The Bard's 'A Midsummer Night's Dream,' its style and tone more closely resemble the 1955 Swedish film, 'Smiles of a Summer Night,' directed by Allen's cinematic idol, Ingmar Bergman. Yet whatever its roots or influences, this light, airy trifle  also recalls Allen's earlier, more madcap works, while focusing on the maneuvers, longings, and obsessions that swirl about his favorite topic, love. While not as relatable as 'Annie Hall' or as racy as 'Everything You Always Wanted to Know About Sex* But Were Afraid to Ask,' the film still oozes a fair amount of charm, even if it's not one of Allen's more affecting or substantive efforts.

'A Midsummer Night's Sex Comedy' sounds a lot more titillating than it turns out to be. Set around the turn of the 20th century at a bucolic country estate, Allen's spritely tale of amour often feels like a Restoration farce, as characters swathed in bulky period clothing bounce from one fickle attraction to another, all while spouting bon mots and pontificating about the glories and despair of love and lust. Of course, in Allen's cerebral world there's a lot more talk than bawdy action, but with his usual linguistic flair, the Oscar-winning writer and director - just as he did in 'Love and Death' a few years earlier - shows us people back then were just as neurotic, needy, and insecure as they are now, and were equally preoccupied with sex and romance. Allen not only juxtaposes urban sensibilities against a pastoral environment, but also deftly weaves metaphysical discussions about the meaning of life and evolution of social and sexual roles and mores into his smart, witty script, and though much of the banter is nothing more than pseudo-intellectual nonsense, it enhances the subtle humor lacing this tangled tale.

The fun begins when Leopold (Jose Ferrer), an esteemed and aged professor (and life-long bachelor), brings his much-younger, free-spirited fiancée, Ariel (Mia Farrow), to the quiet, rural home of stock broker-cum-wacky inventor Andrew (Allen) and his devoted wife Adrian (Mary Steenburgen). Also attending the weekend soirée is Andrew's best friend Maxwell (Tony Roberts), a lascivious doctor, and his affair-du-jour Dulcy (Julie Hagerty), the comely nurse at his New York City practice. Maxwell and Dulcy jump in the sack upon their arrival, while Andrew and Adrian try to dissect their sexual dysfunction (they haven't been intimate in more than a year), which is complicated by Andrew's prior connection to and present fascination with Ariel, his greatest romantic regret. "The saddest thing in life is a missed opportunity," Andrew says, and not acting on his attraction to Ariel several years ago has haunted him ever since.

Ariel, however, also catches Maxwell's eye and instantly bewitches the doctor, who pursues her with brazen abandon. His impetuosity and ceaseless attention, along with some lingering feelings for Andrew, cause Ariel to question her future with Leopold, who - unbeknownst to his bride-to-be - flippantly decides to have one last fling with an all-too-willing Dulcy. Meanwhile, Adrian hopes some bedroom tips from her more sexually liberated houseguests will revive her husband's waning interest, as a frustrated, befuddled Andrew vies with his buddy for the fair Ariel's favor. As Andrew astutely opines, "Sex alleviates tension and love causes it." Both drive our psyches to distraction, and that's pretty much the point - if there is one - of this featherweight comedy.

Allen reportedly wrote 'A Midsummer Night's Sex Comedy' during a frenetic two-week period, and its breezy nature, sketchily drawn characters, and wispy plot reflect its hasty construction. He also penned the primary female role with perennial leading lady Diane Keaton in mind, but prior commitments prevented her from accepting the part, so Allen cast Farrow in what would be the first of more than a dozen collaborations. Though Farrow would quickly come into her own as an Allen heroine in 'Broadway Danny Rose' and 'The Purple Rose of Cairo' a couple of years later, she often seems noticeably uncomfortable here, and admits to experiencing paralyzing fear and crippling self-doubt during shooting. Farrow looks beautiful, but doesn't connect well with Allen or the rest of the cast. She often flaunts a dazed, deer-in-the-headlights expression and speaks in a robotic monotone, almost as if she's concentrating too intently on reciting Allen's dialogue verbatim. It's no wonder her stilted portrayal resulted in a notorious Golden Razzie nomination, the only time a performance in a Woody Allen film garnered such a dubious distinction.

Luckily for Allen, 'A Midsummer Night's Sex Comedy' is an ensemble piece, so Farrow can only drag it down so far. The other actors handle their chores with aplomb, especially Ferrer as the pompous, arrogant professor (it's too bad he never appeared in another Allen picture), Roberts as the lovesick lothario, and Hagerty, who brings the same doe-eyed naiveté and ditziness she brought to 'Airplane!' to her liberated portrait of femininity. (The shot of her pensively smoking a cigarette [see photo below] looks exactly like the shot in 'Airplane!' that follows her inflation of the blow-up autopilot.) At times, Hagerty recalls a young Marilyn Monroe (never more so than when she says to Leopold, "You're elegant"), and a clumsy kitchen sex scene between Allen and Steenburgen just might be a comedic send-up of a similar, highly celebrated encounter between Jack Nicholson and Jessica Lange in 'The Postman Always Rings Twice.' Allen's love of movies is well known, so who's to say whether these connections are coincidental or intentional?

Finally, no discussion of 'A Midsummer Night's Sex Comedy' would be complete without acknowledging the superior cinematography of Gordon Willis, who composes an array of breathtaking natural images, many of which are suitable for (freeze) framing. From fields of purple lavender swaying in the breeze to a ladybug crawling over a white lily, Willis brilliantly captures the flora and fauna of a setting that teems with vitality, promise, and wonder. Bubbling brooks, frolicking deer, and graceful swans coasting on a placid lake make an indelible impression and heighten the aura of earthy romance that permeates the film. At times, Willis' photography eclipses Allen's script, and that's no small feat.

Plenty of Allen's films outshine this one, but watching these six conflicted characters navigate the mental minefield of love is often a delight. Like a gentle sea breeze or fluttering butterfly, the impact of 'A Midsummer Night's Sex Comedy' is fleeting at best, but its moments of humor and truth strike a chord and make this celebration of romance worth watching at least once. 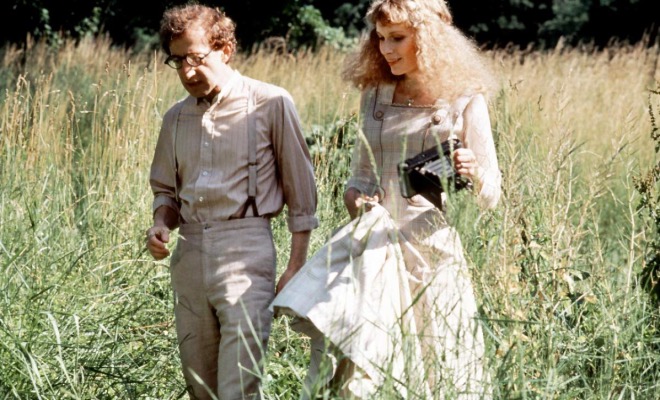 'A Midsummer Night's Sex Comedy' arrives on Blu-ray in a limited to 3,000 edition packaged in a standard case. Video codec is 1080p/AVC MPEG-4 and audio is DTS-HD Master Audio 1.0. Once the disc is inserted into the player, the static menu without music immediately pops up; no previews or promos precede it.

One of the most notable aspects of 'A Midsummer Night's Sex Comedy' is Gordon Willis' stunning cinematography, which brings the bucolic countryside of upstate New York to brilliant life. The memorable images occasionally upstage Allen's script, and Twilight Time's 1080p/AVC MPEG-4 transfer honors them well. Though at times the picture appears a little soft, clarity is often quite good, and a natural grain structure helps evoke the look and feel of film. Colors are quite vivid; the bright hues of various flora light up the screen, yet the image still maintains a cozy warmth that heightens the tale's intimate nature. Blacks sport a pleasing richness, nocturnal scenes flaunt a surprising amount of detail, and though close-ups are a bit diffused, fine facial features can still be discerned. A few nicks and marks dot the source material, but don't harm the overall presentation, which faithfully captures the movie's original look.

The DTS-HD Master Audio 1.0 track supplies solid, if unspectacular, sound. High-quality, multi-channel audio has never much interested Allen, so his tracks tend to be rather pedestrian, and this one is no exception. Fine fidelity boosts the presence and tonal depth of the musical selections by classical maestro Felix Mendelssohn, which nicely fill the room, and all the dialogue is clear and easy to comprehend. Atmospherics are a bit weak, but no hiss, pops, crackles, or distortion intrude. For a dialogue-based film, this track asserts itself well enough, but is about as basic as they come.

In addition to an isolated score track (of interest only if you're a Felix Mendelssohn fan) and typical of Woody Allen home video releases, the film's brief and punchy original theatrical trailer is the only extra included on the disc.

A wispy trifle that makes some cogent observations about the vagaries of human relationships, 'A Midsummer Night's Sex Comedy' lacks the élan of Woody Allen's upper echelon films, but still produces its share of laughs and exudes plenty of patented Allen charm. Though substance comes at a premium, the ensemble cast meshes well together and Gordon Willis' first-rate cinematography beautifully frames the film. Twilight Time's Blu-ray presentation features solid video and audio transfers, but typical of Allen releases, no supplements. 'A Midsummer Night's Sex Comedy' may be far from Allen's best, but like the writer-director's other middling films, this one is still worth a good, long look.