Take the Money and Run

"The gags come every 30 seconds" (Boxoffice) in this "delightful satire" (Hollywood Citizens News) from film legend Woody Allen in his brilliant first outing as writer, star and director. "Allen is hilarious" (NY Daily News) and "never fails to steal the audience's heart" (LA Herald-Examiner) in this inspired comedy that's nothing less than "nuttiness triumphant" (Look Magazine)!

Virgil Starkwell (Allen), having no talent for his beloved cello, turns to larceny as a career. Unfailingly optimistic, he is nevertheless a complete criminal failure - although his prison breakouts are often successful. And with the support of his loving wife Louise (Janet Margolin), he may yet pull off a successful bank heist...if he can just manage to write out a legible stickup note!

What's Up, Tiger Lily? marks Woody Allen's official directorial debut, but the first film that truly bears his creative stamp came three years later in 1969. Take the Money and Run is an apt title for a movie that looks like it was made on the run. Rough around the edges, often unfocused, and shot on a shoestring budget, this madcap compendium of jokes, shtick, and satire revolving around a hapless, inept bank robber remains a hilarious and creative romp that not only laid the groundwork for many of Allen's best-known later works, but also strongly influenced such classic comic fare as This Is Spinal Tap and Airplane!.

It's hard to believe it's been 48 years since Take the Money and Run premiered, and over the past five decades, Allen has certainly evolved from a jumpy, pedantic comedian to one of the most intelligent, distinguished, and respected elder statesmen of cinema. Yet just like the gritty early works of Martin Scorsese (who burst upon the cinema scene around the same time), Allen's first forays into film farce evoke a sense of nostalgia and remind us just how funny and innovative this bespectacled nebbish from Brooklyn once was. Of course, Take the Money and Run lacks the polish and refinement of Allen's later films, but its brash, youthful exuberance and naive charm still propel the movie and captivate audiences.

The film is also noteworthy because it introduced a new cinematic form. Allen, with panache and insight, adroitly mimics and parodies those erudite historical TV documentaries of yore and coins what soon would be known as the "mockumentary." The writer-director would refine and perfect this inspired filmmaking style 15 years later in Zelig, but Take the Money and Run is an exceptionally good trial run, combining static, sober interviews with free-wheeling sight gags and slapstick situations. Though the movie's engine begins to sputter toward the end, it plows ahead at breakneck speed for most of its brisk 85 minutes, as Allen employs a kitchen sink approach, throwing all sorts of comedy at the wall. Luckily for us, most of it sticks.

The film chronicles the life and career of notorious bank robber Virgil Starkwell, the first in a long line of lovable, neurotic losers modeled after and played by Allen himself. Through a series of amusing vignettes, we witness Virgil's indoctrination into a life of crime and the utterly pathetic capers that land him in prison. An experimental vaccine that briefly transforms him into a rabbi wins him parole, but it's not long before hard times lead him back onto a crooked path. Virgil intends to mug a random woman picnicking in the park, but when she turns around, her beauty instantly bewitches him. "After 15 minutes I wanted to marry her," he says, "and after half an hour I completely gave up the idea of stealing her purse."

Not long after, he does marry Louise (Janet Margolin), but another bungled heist sends him back up the river, this time for 10 years. Yet the ever-resilient and resourceful Virgil busts out of the joint once again, and he and Louise go on the run. Virgil tries to go straight, but with the deck stacked against him, he decides to mastermind one final robbery that will put him and Louise on easy street for the rest of their lives...if he doesn't screw it up.

Some terrific gags punch up the film - from the gun made out of soap that bubbles up during a rainy prison break to the botched robbery that goes south because of an indecipherable hold-up note - but Allen knows when to give his audience a breather. The tender, awkward romance between Virgil and Louise provides occasional respites from the lunacy, while adding that wonderful wistfulness that pervades so many Allen productions to this frantic farce. Other patented Allen elements like neuroses, psychobabble, and homages to old Hollywood make their debut here, too. A therapist named Julius Epstein (one of the writers of Casablanca), a director named Fritz (who so resembles legendary film director Fritz Lang that I actually believed it was Fritz Lang), and a lengthy sequence that lampoons the 1930s social conscience movie I Am a Fugitive from a Chain Gang lend Take the Money and Run additional richness and prove it's far smarter than it appears to be.

And yet Allen's inexperience as a director is continually evident throughout the film. Even the script, co-written by Mickey Rose, aimlessly meanders. (It's really little more than a conglomeration of gags hung on a flimsy premise.) Reportedly, the narrative was such an incoherent mess, editor Ralph Rosenblum was called upon to swoop in and save the movie by reordering segments to bolster the comic impact of Allen's bits. A fair amount of choppiness and sloppiness still exists, but the potential for greatness is visible, too. Marvin Hamlisch's energetic music score enhances the hilarity, and Allen's assured performance, which is nicely complemented by the doe-eyed, ditzy Margolin and an array of perfectly cast supporting actors, holds everything together.

Many comedies don't hold up a half century later, but Take the Money and Run does, largely because pure, unadulterated goofiness never goes out of fashion. Allen would strive for more meaning in his movies as he matured, but his early work is all about the laughs, and this auspicious film supplies a bucket load of them. 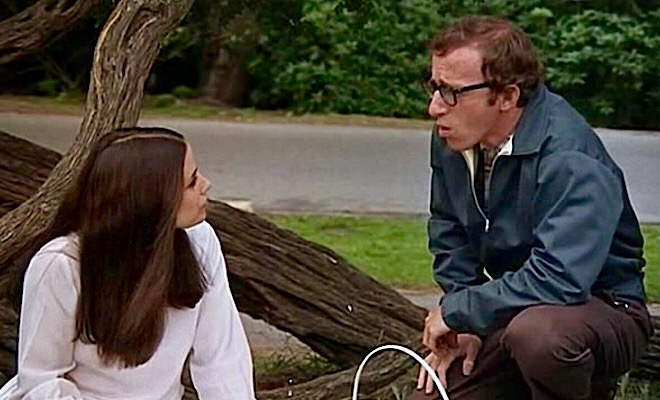 Take the Money and Run arrives on Blu-ray packaged in a standard case with reversible cover art. Video codec is 1080p/AVC MPEG-4 and audio is DTS-HD Master Audio 1.0. Once the disc is inserted into the player, the static menu with music immediately pops up; no previews or promos precede it.

To be honest, I wasn't expecting much from this 1080p/AVC MPEG-4 transfer, considering Take the Money and Run was produced on a shoestring budget for a long defunct independent company. Yet Kino Lorber has unearthed a darn nice print of this early Woody Allen comedy and supplies a high-quality rendering featuring solid clarity and contrast and a pleasing color palette. Light but noticeable grain preserves the film-like feel, and any age-related imperfections like nicks, scratches, even a full-on frame tear blend in well with the movie's vintage mockumentary style, making them easy to forgive. Hues are surprisingly vibrant, with bold reds, verdant greens, and prison-issue blues lending the picture a seductive lushness, while deep black levels and natural flesh tones balance the image. Close-ups highlight Allen's freckles, glistening sweat, and fine facial hairs well, background elements are easy to discern, and no banding, crush, or other digital issues occur. Though far from perfect, this winning transfer beautifully freshens up this almost 50-year-old classic and should please those Allen fans who have waited a long time for its Blu-ray release.

Were it not for Marvin Hamlisch's buoyant score, the DTS-HD Master Audio 2.0 mono track would be rather primitive, but Hamlisch's inspired music, which incorporates a number of different styles (all perfectly tailored to Allen's gags), energizes the on-screen action and fills the room with potent yet well-modulated tones. A wide dynamic scale handles the brass, strings, winds, and percussion with ease, and sonic accents like alarm bells, gunfire, and the cacophony of the prison laundry room are crisply rendered without any distortion. All the dialogue is clear and easy to comprehend (except for a few comments in that prison laundry room), and no hiss, pops, or crackles crop up. While this isn't a particularly active track, it does its job without incident, and is presented well here.

The only extras on the disc are theatrical trailers for The Adventures of Sherlock Holmes' Smarter Brother, Life Stinks, Son of the Pink Panther, After the Fox, and Moving Violations.  Unfortunately, there is no preview for Take the Money and Run.

Take the Money and Run may lack the polish we've come to expect from Woody Allen over the past 40-plus years, but the laughs just keep coming in this hilarious "mockumentary" about a bumbling bank robber on the run from the law. Allen cuts his directorial teeth on this goofy yet inspired romp that lays the groundwork for a career of idiosyncratic comedy. Typical of an Allen home video release, Kino Lorber's Blu-ray presentation doesn't include any extras, but the surprisingly good video and audio transfers nicely freshen up the film, and help this disc earn an enthusiastic endorsement. Recommended.

Sale Price 16.21
List Price 29.95
Buy Now
3rd Party 16.21
In Stock.
See what people are saying about this story or others
See Comments in Forum
Previous Next
Pre-Orders
Tomorrow's latest releases