Fictional documentary about the life of human chameleon Leonard Zelig, a man who becomes a celebrity in the 1920s due to his ability to look and act like whoever is around him. Clever editing places Zelig in real newsreel footage of Woodrow Wilson, Babe Ruth, and others. Written by Scott Renshaw.

Woody Allen's artistry as a director has been well documented. Whether he's extolling the virtues of the Big Apple in 'Manhattan,' paying homage to Ingmar Bergman in 'Interiors,' or saluting German Expressionism in 'Shadows and Fog,' Allen consistently constructs visually stimulating movies that complement - and at times salvage - his idiosyncratic scripts. But with 'Zelig,' he outdoes himself. Technically brilliant, inventively shot, and flaunting a pitch-perfect tone, this light, amusing "mockumentary" is a creative marvel, especially when one realizes it was produced before the dawn of the modern special effects age. Substance is a bit lacking, but Allen so flawlessly executes the concept, we forgive any thematic shortcomings.

Presented as a straight documentary, complete with authoritative narration by Patrick Horgan (John Gielgud originally recorded the narration, but Allen felt it was too grandiose, so decided to scrap it), 'Zelig' chronicles the life of "human chameleon" Leonard Zelig (Allen), described as "the phenomenon of the 1920s." Afflicted with a bizarre disorder that allows him to physically transform himself to mirror those around him, Zelig adopts various races, religions, social stances, and abilities, and in the process becomes a celebrated - if somewhat freakish - figure.

Zelig's case fascinates Dr. Eudora Fletcher (Mia Farrow), a renowned psychiatrist, and during a number of therapy sessions she tries to identify and treat his condition. Yet her success alters Zelig's personality and turns a man with a desperate need to fit in into an unabashed egotist. Their close collaboration also leads to a personal attraction that becomes more complicated as time goes on and leads to a scandal that will threaten their relationship and Zelig's recovery.

The film's technical feats - seamlessly inserting Allen into vintage newsreel clips and photos that feature such American icons as Babe Ruth, Lou Gehrig, Jack Dempsey, Eugene O'Neill, Calvin Coolidge, and Herbert Hoover, to name but a very few - grabbed most of the attention when 'Zelig' was released in 1983. (Sure, 'Forrest Gump' employed the same "gimmick" a decade later, but by that time director Robert Zemeckis had far more special effects wizardry at his disposal, making the process much easier.) Now we're immune to such manipulations, so what really impresses about 'Zelig' today is how Allen so brilliantly nails the tone and presentation of his documentary, which imitates a familiar genre to a T.

Anyone who grew up in the 1960s, '70s, or '80s will most certainly recall the type of sober, stuffy, and erudite profiles 'Zelig' parodies. The scratchy archival footage, old newsreels, pompous narration, and dry, pedantic interviews that characterize these documentaries are all masterfully recreated, yet tinged with Allen's trademark wit and sense of the absurd. Authentic vintage material is also employed, but Allen and esteemed cinematographer Gordon Willis perfectly match it to the manufactured elements, creating a tightly knit unit that never cracks. (To obtain the weathered visual effects that are so critical to the film's success, Willis reportedly stomped on the negatives in the shower. "I have never worked so hard at making something difficult look so simple," he once said.)

Allen also enlists the services of noted intellectuals like Susan Sontag and Saul Bellow to act as interviewees who comment on and analyze Zelig's actions. (Some believe these interviews are a direct parody of the ones Warren Beatty employed in 'Reds' a couple of years before.) They perfectly deliver their deadpan assessments, deftly adding to the comedy and wonder that stems from Zelig's outrageous transformations and interactions with a host of notable figures and social groups. Zelig is everywhere and inserts himself into everything, and as his actions are microscopically analyzed with the utmost seriousness, their inherent lunacy is wonderfully emphasized.

Style overshadows substance, but 'Zelig' (which means "blessed" or "dear departed soul" in Yiddish) does make some cogent points about cultural assimilation, celebrity, and psychology, and much of the script's satire springs from those topics. The film even eerily foreshadows the scandal that would envelop Allen and Farrow a decade later, a tawdry cause célèbre that would destroy their personal and creative relationship. Though their speaking parts are limited, Allen and Farrow both embody their roles, crafting believable portraits in an artificial, stylized environment. 'Zelig' took so long to produce, Allen finished both 'A Midsummer Night's Sex Comedy' and 'Broadway Danny Rose' during the same timeframe, and the trio of films cemented his screen partnership with Farrow and paved the way for many other successful collaborations.

'Zelig' only runs 79 minutes, but it still drags on a bit too long. (The documentaries upon which it is modeled rarely run longer than an hour.) Apparently, Allen needed to pad the movie to bring it to an acceptable feature-film length, and the stretching is evident, most notably during the therapy scenes between Zelig and Fletcher that tend to meander and disrupt the movie's flow. But such minor criticisms can't detract from the exhilarating originality and impressive presentation of this captivating movie, arguably the most unique of Allen's career.

'Zelig' received two Oscar nominations - one for cinematography and one for costume design. (Both awards went ironically to Ingmar Bergman's 'Fanny and Alexander.') Allen usually nabs a nod for his screenplays, but perhaps because the script doesn't include much dialogue, the Academy overlooked the genius of the film's construction. Yes, 'Zelig' is a novelty. Yes, it's delightfully quirky. And yes, it's a trifle, but it's a highly creative, beautifully mounted trifle and an artistic triumph for one of America's best directors. 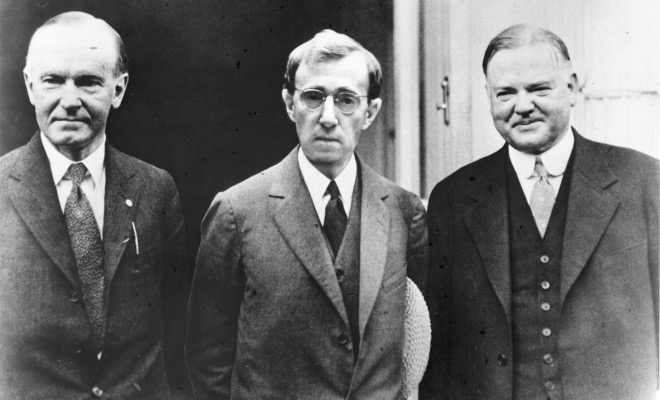 'Zelig' arrives on Blu-ray in a limited to 3,000 units edition and is packaged in a standard Blu-ray case. An eight-page booklet that features an essay by Twilight Time columnist Julie Kirgo, black-and-white scene shots, and the movie's original poster art is tucked inside the front cover. Video codec is 1080p/AVC MPEG-4 and default audio is DTS-HD Master Audio 1.0. Once the disc is inserted into the player, the static menu with music immediately pops up; no previews or promos precede it.

'Zelig' masterfully evokes the photographic tone of old TV documentaries and this 1080p/AVC MPEG-4 transfer brilliantly juggles numerous film stocks and styles and integrates them into a dazzling and cohesive whole. The varying degrees of grain, the nicks, scratches, and blotches, the over- and under-exposure of images, the faded color, and archival stock footage are all perfectly reproduced. Superior clarity and contrast allow us to appreciate the care and artistry that went into the film's production, and excellent gray scale variance highlights the subtleties and brilliance of Gordon Willis' cinematography. Also of note, the enhanced detail levels of high-definition don't betray the special effects that are such a vital aspect of this creative movie. Of course, it's easy to go easy on a transfer when image deterioration is the desired effect, but the defects are so varied and plentiful, only an exceptional transfer can properly render them...and this one does. Rarely can a film riddled with image inconsistencies and quality issues be called a visual feast, but thanks to the genius of its presentation, 'Zelig' is just that, and this transfer strikingly salutes Allen's inspired intent and meticulous execution.

As disc reviewers, we consistently decry annoying imperfections like surface noise, hiss, and crackles, but in the case of 'Zelig,' such defects are an integral part of the film's fabric, making it more authentic and involving, and contributing to its overall success. And this nuanced DTS-HD Master Audio 1.0 track gloriously showcases every grating detail. The track perfectly replicates the distorted, tinny, deteriorating elements of decades-old audio, so the various clips remain true to their intended roots. The vintage song recordings are purposely not cleaned up, so we can appreciate their roughness, yet the clarity and fidelity of lossless audio allows them to achieve a fair degree of richness. Dialogue is easily comprehendible, but only as clear as the various scenes warrant, and the new songs by Dick Hyman seamlessly complement the original tracks. Because of the audio's intended imperfections and stylization, this is a more interesting track than most Allen films, and this rendering beautifully honors it.

Typical of Allen home video releases - especially those produced before the dawn of high definition - only a couple of minor supplements are included on the disc.

A technical and stylistic triumph from one of America's most acclaimed directors, 'Zelig' is a unique and fascinating "mockumentary" that perceptively satirizes celebrity, psychology, and Woody Allen's favorite topic, the human condition. Stunningly different yet typically Allen-esque, this charming film impeccably mimics the style and tone of TV documentaries of the late 20th century. Twilight Time's Blu-ray presentation features top-notch video and audio transfers, but no supplemental material. 'Zelig' may not have much meat, but it's a virtuoso performance from one of America's most acclaimed directors. Highly recommended.