The younger brother of the consulting detective tries to steal Sherlock's glory by solving an important case assisted by an eccentric Scotland Yard detective and a lovely but suspicious actress.

"One of these days you're going to assume a broken ass Mister Holmes!"

When a particular person has been a part of so many amazing films and you've known them for so long, it's difficult to remember how or even where they got their start. When a personality as rich and entertaining as Gene Wilder's passes on, it's a good time to take a step back and reflect on their career. While most will remember Wilder as an eccentric distributor of candy goods or as a mad scientist who has difficulty pronouncing his last name correctly while bringing a monster to life, people often forget that he took a stab at writing and directing. While his efforts behind the camera may not have been big box office earners, they were comedic delights just the same. While helping Mel Brooks put the finishing touches to his hilarious farce 'Young Frankenstein,' Wilder took the opportunity offered to him to write and direct his first feature film. The result was the bizarrely hysterical 1975 film 'The Adventures of Sherlock Homes' Smarter Brother.' The plot may not make a lot of sense, but it is a true madcap delight if you give yourself to its sense of whimsy.

When one has a successful older sibling, it's often very difficult to live life in their shadow - especially if you believe you're the smarter one. Such is the constant annoyance of Sigerson Holmes (Gene Wilder). When his older brother Sherlock (Douglas Wilmer) and his partner Dr. Watson (Thorley Walters) must leave London for a case, another case they can't take on must be headed up by dear younger Sigerson. With a strange Scotland Yard Sgt Orville Stanley Sacker (Marty Feldman) requesting Sigerson's assistance finding out who stole some important documents, Sigerson is all too ready to prove he's the smarter and more astute detective in the Holmes family. When the mysterious performer Jenny Hill (Madeline Kahn) arrives on the scene, the case takes on a new dimension that involves the strange opera maestro Eduardo Gambetti (Dom DeLuise) and leads to Sherlock's long-time nemesis Moriarty (Leo McKern). Now all Sigerson has to do is prove he's the apt detective he claims to be in order to out-Sherlock his older brother and gain the fame he's long deserved!

'The Adventures of Sherlock Holmes' Younger Brother' is one of those off the wall nonsensical comedies that feels right at home in the arena of early Richard Lester films like 'The Bed Sitting Room' and Monty Python movies. The plot involving Madeline Kahn's Jenny Hill or how her stealing an important document relates to Moriarty of even Sherlock Holmes and Dr. Watson for that matter is just simple window dressing. As Wilder states in his commentary, he would only write and direct this movie if Madeline Kahn and Marty Feldman starred in it. If either of them said no, this project never would have gotten off the ground. To that point, 'Younger Brother' is entirely devoted to showcasing the talents of its impressive cast. If one is going into this particular 'Holmes' yarn expecting a thoroughly thought out and expertly crafted mystery suspense thriller that hinges on a single minute detail you'll sorely be disappointed. You're there to laugh at the antics and that's all. 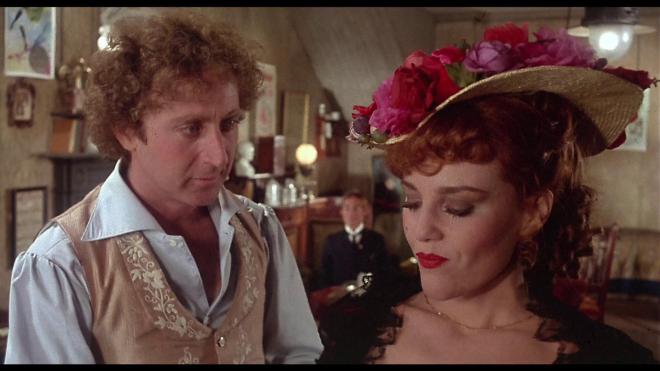 'The Adventures of Sherlock Holmes' Younger Brother' is a showcase film, pure and simple as that. While it's an impressive undertaking of Gene Wilder standing as the lead star, writer, song writer, and ultimately director, this little Victorian-era screwball comedy is not an ego film in the slightest bit. All you have to do is watch just a little bit of the movie to see that all Gene was trying to do was have some fun with his friends Marty Feldman and Madeline Kahn and give them a chance to strut their stuff and show their impressive range. The fact that this film has anything even closely resembling a plot is incidental. You're meant to be watching Marty play a crazy and eccentric detective who may or may not have a multiple personality disorder. You're sitting looking at your screen understanding that this film is dedicated to showing off Madeline Kahn's comedic chops, it doesn't really matter her character doesn't make much sense because you're too busy laughing at her. And, of course, you're also meant to take a step back and enjoy Wilder play a scorned ego-maniac who tries to outdo all of his older brother Sherlock's deductive methods. The film may be a bit inconsistent in some places, it never really makes a lot of sense in the traditional definition of plot structure and development, but that's okay, you're likely to be too busy laughing to worry about it.

Along with 'Haunted Honeymoon,' 'The Adventures of Sherlock Holmes's Smarter Brother' arrives on Blu-ray in the shadow of Gene Wilder's death. It's always a bittersweet endeavor to take a look at someone's career output after they've passed away, but in the case of Gene Wilder, it's a rewarding one. So often people remember Wilder for his Willy Wonka or for the films he made with Mel Brooks or for his films with Richard Pryor. While those are certainly some great highlights, it's good to take a step back and appreciate everything he managed to do with his career. While writing and directing weren't what Gene was known for, his few stabs at directing were still very funny endeavors. I don't hold the same level of childhood nostalgia towards 'The Adventures of Sherlock Holmes' Younger Brother' as I do for 'Haunted Honeymoon,' but over the years this film has slowly grown to become a favorite. Perhaps, it wouldn't be my first choice when choosing a Gene Wilder film to enjoy, it is a bit of an acquired taste, but when the need for some madcap hilarity arises, 'The Adventures of Sherlock Holmes' Older Brother' provides a pretty good fix and never fails to entertain.

'The Adventures of Sherlock Holmes' Younger Brother' arrives on Blu-ray courtesy of Kino Lorber and their Studio Classics label. Pressed on a Region A BD25 disc, the disc comes housed in a standard Blu-ray case. The disc opens directly to a static image main menu with traditional navigation options.

While there is a noticeable uptick in quality compared to DVD, some fans of this film may find its 1.85:1 1080p transfer to be a bit lacking. Film grain is apparent throughout and gives the image some pleasing detail levels, but the condition of the source print and some very obvious age-related issues take their toll. I would suspect that this print is made up of multiple sources. Grain and detail can fluctuate shot to shot within the same scene making the image shift from being fully detailed to blurry and a bit muddy at times. Colors and black levels also experience this shift in quality. One moment the image can look even and strong with nice color saturation and inky blacks, the next shot can feature blown out contrast with a lot of blooming, soft blacks, and bleached out colors. These same sort of shifts are apparent in the transfer for 'Haunted Honeymoon,' but they're far worse in this case. Additionally, damage rears its ugly head in the form of severe speckling, scratches, and a few stains. This is clearly a very dated master from a source that has unfortunately not experienced much - if any - restoration effort over the years.

Because the dialogue is the key element of this film, the DTS-HD MA 2.0 mix highlights all of that improvisational comedic delights. This is the sort of comedy where the lines fly a mile a minute and this track thankfully keeps up. Background sound effects and scoring by John Morris provide a nice sense of dimension and help fill up the track, but the main focus is entirely on the dialogue. There are some age-related issues that crop up in the form of hiss and some pops, but thankfully these anomalies are only slight and don't distract from the main feature all that much.

Audio Commentary: Writer, Director, Star Gene Wilder flies solo for this commentary track. It's an informative little track, Gene goes into a lot of great detail about how the film came to be, shooting it, and most importantly what it was like working with Marty Feldman and Madeline Kahn.

'The Adventures of Sherlock Holmes' Smarter Brother' may not be the funniest or best effort from writer, director, and star Gene Wilder, but it is a heck of a lot of madcap fun. With a cast that also includes Marty Feldman, Madeline Kahn, and Dom DeLuise, it's hard to go wrong with this little comedy. Kino Lorber brings the film to Blu-ray with a serviceable if troubled A/V presentation. The Gene Wilder commentary is a welcome bonus feature as he provides a very humble and informative look at the film. It may not be Wilder's best film, but it's still good enough and is absolutely worth a look.

Sale Price 16.99
List Price 29.95
Buy Now
3rd Party 16.99
In Stock.
See what people are saying about this story or others
See Comments in Forum
Previous Next
Pre-Orders
Tomorrow's latest releases