What a Way to Go!

Classic black comedy which opens with Louisa Foster (Shirley MacLaine) donating a multimillion dollar cheque to the IRS. The tax department thinks she's crazy and sends her to a psychiatrist. She then discusses her four marriages, in which all of her husbands became incredibly rich and died prematurely because of their drive to be wealthy.

"That's what I want. Nothing."

The amount of talent associated with a movie - both in front of and behind the camera - doesn't always ensure critical or popular success, and J. Lee Thompson's 'What a Way to Go!' is a prime example. After helming such stellar efforts as 'The Guns of Navarone' and 'Cape Fear,' Thompson shifted gears to direct this wacky, ultra-extravagant comedy about the evils of wealth and how it systematically destroys life, love, and the pursuit of happiness. Acclaimed scriptwriters Betty Comden and Adolph Green ('Singin' in the Rain') crafted the screenplay and wrote lyrics to a couple of songs by Jule Styne ('Gypsy'), and the extensive cast list boasts such accomplished names as Shirley MacLaine, Paul Newman, Robert Mitchum, Dean Martin, Gene Kelly, Dick Van Dyke, and Robert Cummings. But all that star power still isn't potent enough to propel this high-energy but ultimately exhausting farce that tries way too hard to milk some laughs from mediocre material.

Originally envisioned as a vehicle for Marilyn Monroe (to whom it seems much better suited) and later Elizabeth Taylor, 'What a Way to Go!' looks like a lark on paper, yet Thompson's heavy-handed execution kills the story's charm...which might be oddly appropriate, given death plays a starring role in this black comedy about a naïve, fickle young woman who strangely jinxes all the lovable losers she romances. As the film opens, a widowed Louisa May Foster (MacLaine) shows up at the IRS in full mourning garb hoping to donate a $211 million check to the U.S. government. Because it just happens to be April Fools Day, the aghast clerk believes her magnanimous gesture to be a hoax and sends the distraught Louisa away. She then tearfully consults a womanizing psychiatrist (Cummings), hoping he can make sense of her bizarre and tragic existence.

She begins to tell the doctor her tale of woe, recalling her humble beginnings and how her domineering mother (Marx Brothers foil Margaret Dumont, in her final film) ceaselessly emphasized the importance of money. The young Louisa rejects such materialistic views, and though she's courted by the wealthy town lothario, department store magnate Lennie Crawley (Martin), she only has eyes for Edgar Hopper (Van Dyke), a genial pauper who owns a dilapidated notions store that Lennie hopes to put out of business.

Louisa marries poor Edgar, and "for a while," she recalls, "we lived an idyllic life." But when Edgar slashes his prices to liquidate his inventory, business begins to boom, and within a short time - much to Louisa's chagrin - the couple is rolling in dough. Edgar instantly becomes seduced by the almighty dollar's allure and works 24/7 to pad his already bulging coffers, leaving Louisa, who longs for "the simple life," neglected and lonely. Soon, after bankrupting rival Lennie, Edgar works himself into a (very) early grave, and the grieving Louisa goes out on her own, looking for love once again.

Her uncontrollable Midas touch, however, repeatedly ruins her life. Whenever she finds a dreamy destitute man, Louisa impulsively marries him, but their blissful 'La Boheme' existence is always sabotaged by some sort of coincidence that always transforms her lovable lug into a millionaire, which in turn alters his personality and somehow leads to his demise. To Louisa, money isn't a blessing, it's a curse, and though it may not be the root of all evil, it certainly doesn't buy or insure happiness. In her eyes, it destroys it.

Episodic, over the top, and often as tacky as the nouveau riche, 'What a Way to Go!' tries its best to maximize its promising premise, but rarely finds its comic footing. I'm all for lunacy, and the clever, intermittent spoofs of silent movies, foreign films, glossy soap operas, and lavish musicals that mirror Louisa's various relationships are quite cute, but the plotting in between often drags and the running gag becomes stale over time. Sure, the cameos by a host of Hollywood's hottest leading men are a hoot, but their antics are too goofy and portrayals too broad. Newman is especially miscast (and awkward) as an expatriate New York artist (with a thick - and bad - accent) who works as a Paris cab driver and invents an elaborate mechanized painting contraption that takes on a life of its own.

MacLaine is bubbly and appropriately kooky as Louisa (a pale imitation of the captivating character she portrayed in Billy Wilder's 'Irma La Douce' the previous year), and seems to relish modeling an array of outrageous - and Oscar-nominated - Edith Head gowns. (The costume budget alone was reportedly $500,000 - a veritable fortune at the time.) The film's lavish art direction also received an Oscar nod, and all the bold color and opulent sets keep the senses stimulated even when the story sputters and stalls.

In this era of excess, 'What a Way to Go!' reminds us greed is not so good. And though the film isn't as funny as it should be (the screenplay would prove to be Comden & Green's last), it bludgeons us with its homespun message. MacLaine and her men sing, dance, and clown, but their Herculean efforts to entertain only sporadically pay off. Like a Vegas slot machine, 'What a Way to Go!' suckers us in, but the returns are minimal at best. 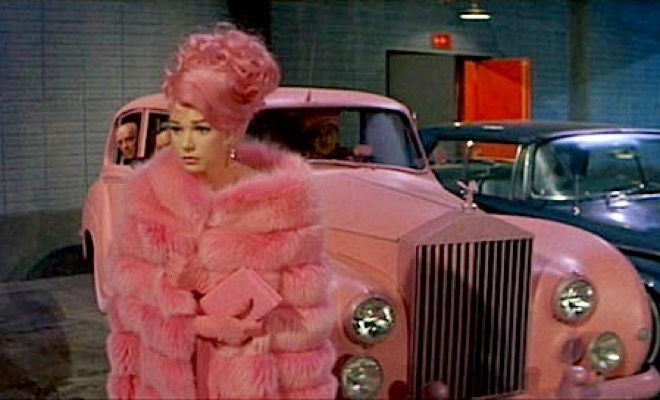 'What a Way to Go!' arrives on Blu-ray packaged in a standard case. Video codec is 1080p/AVC MPEG-4 and audio is DTS-HD Master Audio 2.0 mono. Once the disc is inserted into the player, the static menu with music immediately pops up; no previews or promos precede it.

Aside from faint but consistent print damage, the 1080p/AVC MPEG-4 transfer of 'What a Way to Go!' looks mighty fine. When you see the initial pink-tinged 20th Century-Fox logo, don't adjust your color settings; it rightfully and cleverly bleeds (pun intended!) into the opening sequence. From there, lush, beautifully saturated hues permeate the picture. Oranges are especially vibrant, but pinks, reds, and yellows possess plenty of punch, too. Excellent clarity and contrast help details pop (the jewelry exudes noticeable sparkle), and while grain levels fluctuate a bit, they remain faint most of the time. Inky blacks add weight to the image, flesh tones remain natural and stable throughout (the men all have impeccable tans that contrast nicely with MacLaine's alabaster skin), patterns are rock solid, and close-ups are appropriately sharp. A fair amount of nicks, blotches, and minor scratches intermittently appear, but they rarely compromise the viewing experience. All in all, this is a colorful, occasionally eye-popping transfer that will surely delight fans of this zany romp.

The DTS-HD Master Audio 2.0 mono track supplies clear, balanced sound. Plenty of sonic accents punctuate the audio, including gunshots, pratfalls, horns, alarms, jackhammers, screechy wheels, and jet engines, but none cause any distortion, and subtleties like Kelly's gentle tapping during his soft-shoe routine are well rendered. A wide dynamic scale nicely manages the brassy highs of Nelson Riddle's jazzy music score, which sounds rich and full, and all the dialogue is easy to comprehend. Best of all, no age-related pops or crackles are present, and just a hint of hiss can be detected during quiet moments. This is a fairly active track for a comedy, and it passes almost every test with flying colors.

The original theatrical trailer for 'What a Way to Go!,' along with previews for 'Paris Blues,' 'Foreign Intrigue,' and 'The Honey Pot' comprise the disc's paltry extras "package."

Shirley MacLaine and her gaggle of classy leading men work their tails off trying to wring some laughs out of 'What a Way to Go!,' but sadly, this energetic, glitzy farce only provokes a few mild titters. The high-voltage cast and MacLaine's outlandish costumes are the real stars of this over-baked, over-the-top tale of love, death, and endless unwanted prosperity. Kino Lorber's Blu-ray presentation omits any extras, but features pleasing video and audio transfers. Fashionistas may get a kick out of Edith Head's garish gowns, but only diehard fans of MacLaine, Mitchum, Martin, Newman, Kelly, Cummings, and Van Dyke (that sounds a lot like a law firm!) will want to pick up this frivolous piece of fluff.

Sale Price 17.99
List Price 29.95
Buy Now
3rd Party 17.99
In Stock.
See what people are saying about this story or others
See Comments in Forum
Previous Next
Pre-Orders
Tomorrow's latest releases